Krystal Tsosie (Diné/Navajo Nation) is an advocate for Indigenous genomic and data sovereignty. She is a co-founder of the first U.S. Indigenous-led biobank, a 501(c)3 nonprofit research institution called the Native BioData Consortium. Her current research at Arizona State University centers on ethical engagement with Indigenous communities to ensure Indigenous peoples equitably benefit from precision health and genomic medicine.

Tsosie’s research and educational endeavors have received international media attention in such outlets as The New York Times, PBS NOVA, Washington Post, NPR, The Atlantic, Forbes and The Boston Globe, among others. 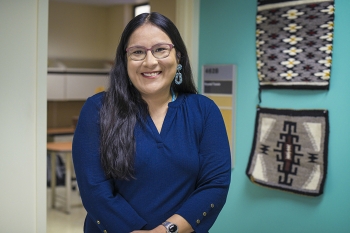 Krystal Tsosie, an ASU Presidential Postdoctoral Fellow at ASU, will become an assistant professor in the School of Life Sciences on Jan. 1, 2023. Photo by Samantha Lloyd Download Full Image

She is a current ASU Presidential Postdoctoral Fellow, and starting Jan. 1, 2023, she will be an assistant professor in the School of Life Sciences at The College of Liberal Arts and Sciences and the first Indigenous human geneticist at ASU.

“I'm excited to come back to ASU and serve as an advocate for Indigenous communities. I want to bring all of these skill sets related to health inequities and genetic epidemiology back to the communities that I grew up with,” said Tsosie.

She is also one of two scholars selected as a 2022–2023 ENRICH Global Chair. The ENRICH (Equity for Indigenous Research and Innovation Coordinating Hub) program is a four-year initiative to create an international network of Indigenous and allied scholars working to advance Indigenous data sovereignty across law, public health, policy, and genomics and data sciences.

As of 2016, 80% of participants in genetics studies are of European descent, although the group makes up only about 16% of the world’s population. This can limit clinical utility of genomics technologies for members of communities who are underrepresented in data sets and health research. However, inclusion and equitable engagement of, particularly, Indigenous communities must be done carefully in order to not create further ethical harm.

“The goal of the ENRICH chair position is to advance digitally enabled futures for Indigenous peoples and communities,” said Tsosie.

“We’re already working on a number of projects related to artificial intelligence and machine learning to try to see what that would look like in terms of protecting genomic information and data for Indigenous peoples. It’s a huge task but one that can revolutionize how Indigenous peoples exercise control over their own data.”

“Tsosie’s work aligns perfectly with our values at ASU and in the communities that we serve,” said Kenro Kusumi, dean of natural sciences at The College. “She is leading genetics and bioethics research of value for Indigenous communities, and she is already a transformational addition to the university.”

Her research focus is on Indigenous populations having data sovereignty and the agency to self-direct the decisions about their data.

“If it's our data, we should be able to have at least some say about who accesses it, how it's used and also how it benefits us. There's a huge problem with the collection of data in that many times that data is a unilateral extraction. It comes out of communities into the hands of largely non-Indigenous researchers. And then how are the benefits of that research being directed back to those communities? It's a big question mark,” says Tsosie.

“We need to ensure that, if we make promises to communities that this research and innovations are going to benefit their health, we fulfill those promises sooner than waiting decades. Because people need access to therapeutics and technologies now.”

“When you’re talking about Indigenous peoples and genetic research, it’s important to acknowledge those times in the past when missteps were made — such as the Havasupai Tribe v. the Arizona Board of Regents lawsuit, which involved ASU. Remembrance of that process should continually call on all of us to better protect, engage and ultimately make way for Indigenous peoples to steward and govern research themselves,” Tsosie added, referencing the 2004 court case that addressed use of the tribe’s DNA samples, which were initially collected for genetic studies on Type 2 diabetes but were also used in other genetic studies.

Tsosie first came to ASU as an undergraduate majoring in microbiology. She was focused on studying cancer biology but really wanted to do work that would benefit her people.

“I grew up using the Indian Health Services, and my father worked at the Phoenix Indian Medical Center for 42 years before retiring. It’s a system that I, my family members and community relies on for our care. As much as I am grateful for those services, we know that Indigenous peoples do not have the same equitable access to health care," Tsosie said.

“I left cancer biology because I wasn’t sure that my research, if it contributed to a therapeutic, would actually benefit my people. As an Indigenous person in science, ensuring that my work benefited them was of utmost importance to me."

She later pursued her PhD in genomics and health disparities at Vanderbilt University, which involved the engagement of Indigenous communities in the Dakotas. It was there that she co-founded the Native BioData Consortium with other Indigenous community members and scientists to think through the questions around data and genomic health equity and ensure that research decisions were really focused on these communities.

“Who better to protect our data and improve research about us than Indigenous people themselves?” Tsosie said.

Eva van Deursen and Lucy Johnson both scored goals in the second half to help the Sun Devil soccer team to a come-from-behind, 3-2 win over Arizona on Friday night. ... Eva van Deursen and Lucy Johnson both scored goals in the second half to help the Sun Devil soccer team to a come-from-behind, 3-2 win over Arizona on Friday night.