What matters to Arizona’s young voters?

According to a Harvard poll, young voters are ready to show up in big numbers for this year’s midterm elections, with the potential to surpass 2018’s increase in turnout. 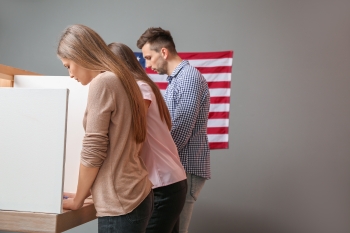 Using pre-election surveys, pre- and post-election interviews and a photovoiceA research method where participants take and share photos that express their views. project to gather insights from the 2020 election period, the researchers asked a variety of U.S.-born youg adults, ages 18 to 29, about the political issues that matter to them most. They also asked participants what motivated them to vote in the 2020 elections and why they voted for either Joe Biden or Donald Trump.

“We found that more young adults are diverging from party positions, taking an ‘undecided’ or ‘independent’ stance,” Flores-Gonzalez said.

According to their recently released report, more than one-third of the young adults in the study identified as independents, saying they would see “both sides” or didn’t feel they quite “fit in,” but felt they had to choose a party to vote in.

Top issues and motivations to vote

The study also showed a difference in voting concerns between Biden, Trump and undecided voters.

Before the election, the researchers asked participants to identify the top three issues they wanted the president or Congress to address.

In post-election interviews, the researchers asked what motivated the participants to vote, finding strikingly different responses between Biden and Trump voters. While Biden voters overwhelmingly pointed to the need for change, Trump voters were concerned with furthering conservative values, and those who were undecided seemed more focused on social issues.

Neither here nor there

“One of the most important findings in the study is the ambivalence young adults showed toward the two major parties,” Flores-Gonzalez said. “In tune with Arizona’s increasing independent voter rolls, a sizable number of participants considered themselves independent voters who base their vote on candidates’ qualifications and how well they align with their views.

“They see themselves as straddling the middle, struggling to find representation in a two-party political structure.”

Another finding was that many of the young adults in the study expressed a dismal view of politics in general, voicing concerns about whether local and federal government leaders had their best interests in mind.

However, participants felt that voting was the most significant way an individual could make a difference in local and national issues, and that voting is especially crucial in a battleground state like Arizona.

“The message we got loud and clear is that neither party is tending to the interests of young adults, and our findings signal a move away from partisan affiliation as more young adults identify as independents who will vote along personal values rather than strict party lines," Flores-Gonzalez said.

“As political division intensifies, young voters pull toward political independence, and as they become critically minded political actors, they may shape a new democracy where a two-party system will likely become irrelevant.”