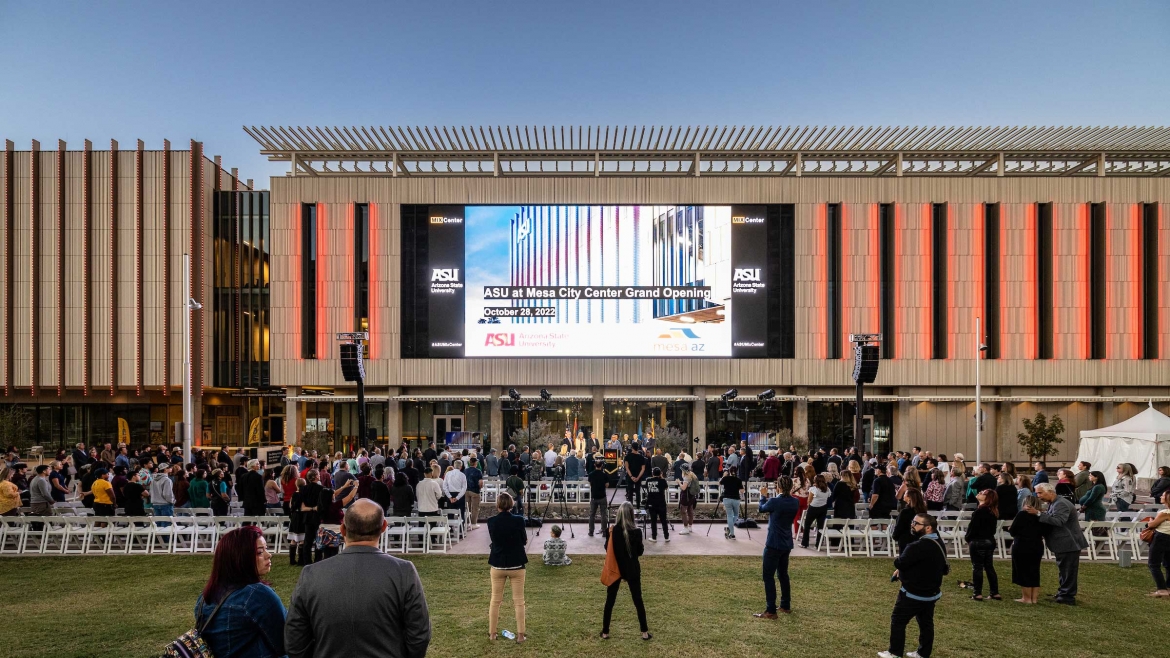 Arizona State University’s new Media and Immersive eXperience Center in downtown Mesa was celebrated Friday as a shining example of the partnership between the university and the city.

Mesa Mayor John Giles described how shortly after he became mayor, about eight years ago, he first met with Arizona State University President Michael Crow. He wasn’t sure what to expect.

“I can’t tell you how thrilled I was that this is an individual and this is an institution that has the same agenda that I do, and that is to serve Mesa and to see Mesa succeed,” Giles said at the ribbon-cutting event Friday evening that was part of a weekend-long grand opening.

“Creating a new civic center for our city was a big vision,” Giles told the crowd.

Crow said the new ASU @ Mesa City Center complex exists because the people and leadership of Mesa believe in ASU.

The MIX Center, capable of producing anything from blockbuster superhero movies to virtual reality video games, is the largest part of Mesa City Center complex, which also includes an outdoor plaza space with a 100-foot movie screen and The Studios, a midcentury building that houses programming and services offered by the J. Orrin Edson Entrepreneurship + Innovation Institute.

Giles was especially moved by The Studios, which are in the renovated former Mesa Library, where he spent many summer days as a child.

“The Studios will be bursting with entrepreneurs planning their next great adventure,” he said.

“Over the short term and the long term, we’ll see this plaza full of families at community events or watching a movie.

“I can’t wait to be back here celebrating the first application of cutting-edge technology developed in this amazing MIX Center or the sure-to-happen first Academy Award winner that will get their start in the best film school on the planet.” 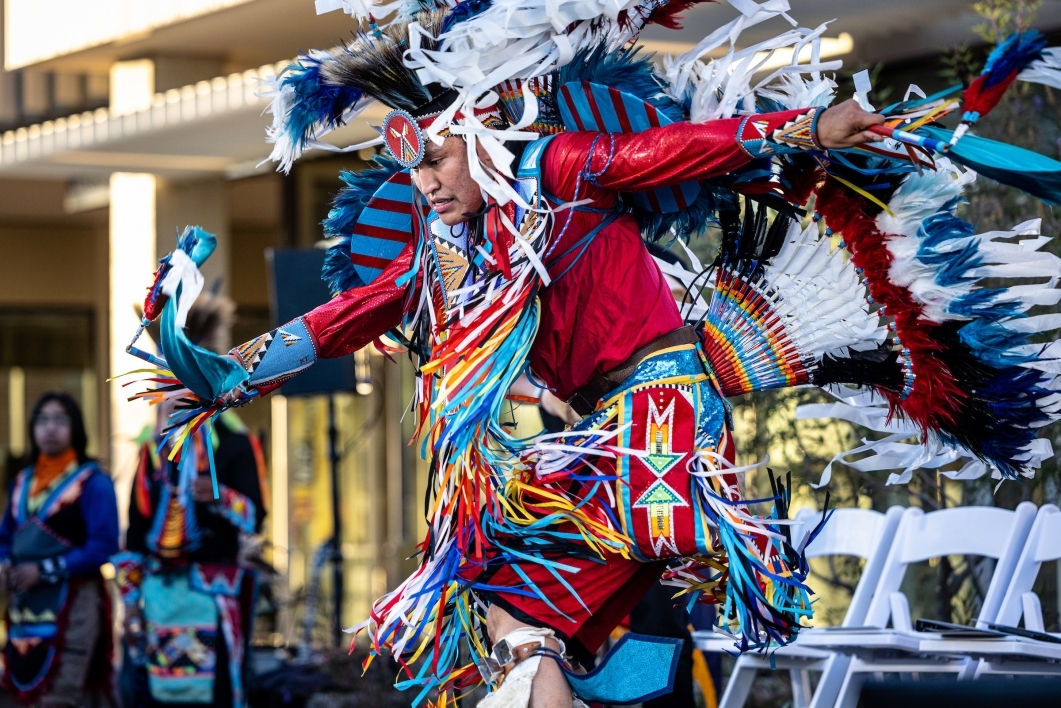 Kenneth Shirley, an ASU alum and founder and CEO of Indigenous Enterprise, performs at the ribbon-cutting ceremony of the new ASU MIX Center on Friday evening. 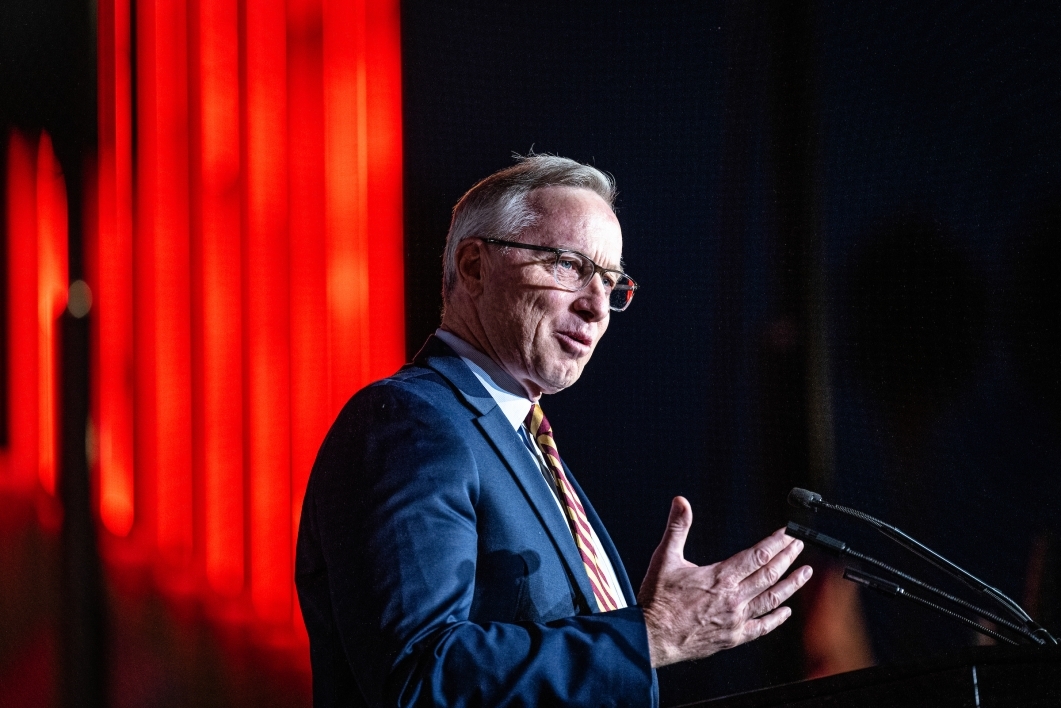 Mesa Mayor John Giles told the crowd at the ribbon-cutting on Friday evening that the new Media and Immersive eXperience Center is the result of a bold vision that will help revitalize the city's downtown. 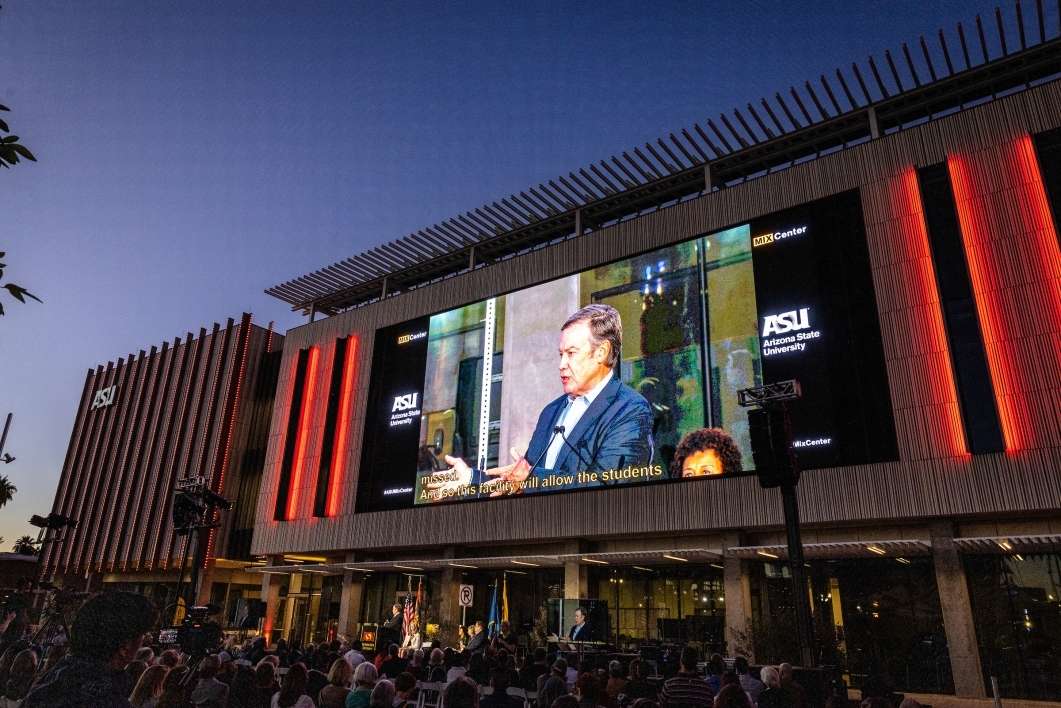 ASU President Michael Crow said that the new MIX Center is an example of how Arizona's economy is on an upward trajectory to become more based in technology and creativity. 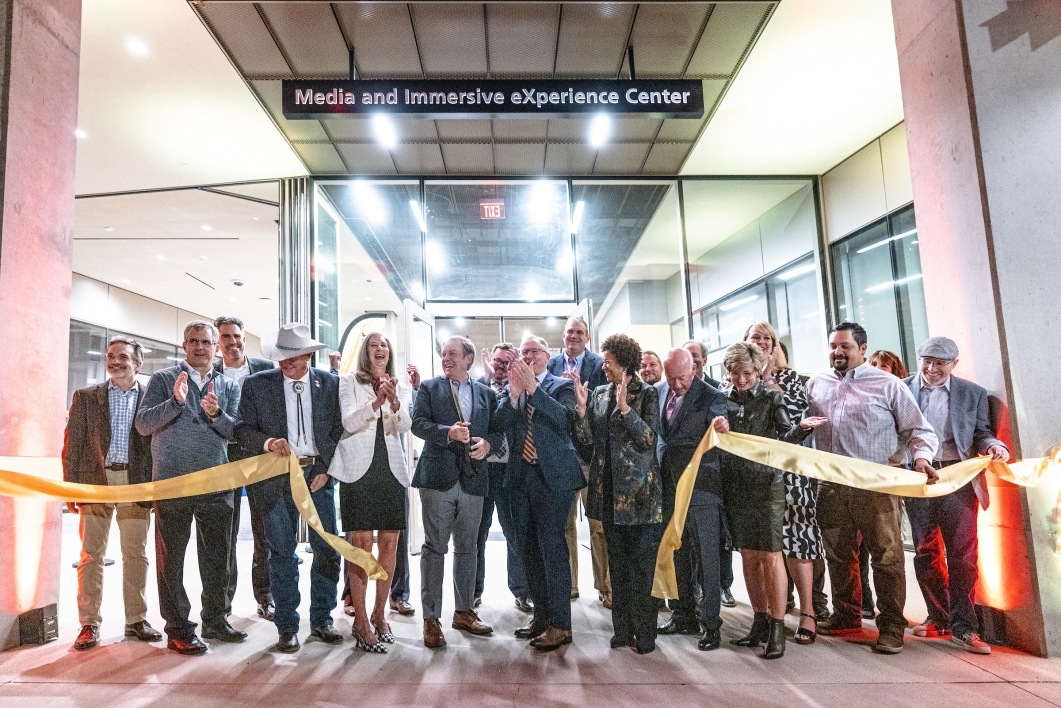 President Michael Crow, Mesa Mayor John Giles (center) and other dignitaries celebrate after cutting the ceremonial ribbon at the grand opening of the MIX Center on Oct. 28 in downtown Mesa. 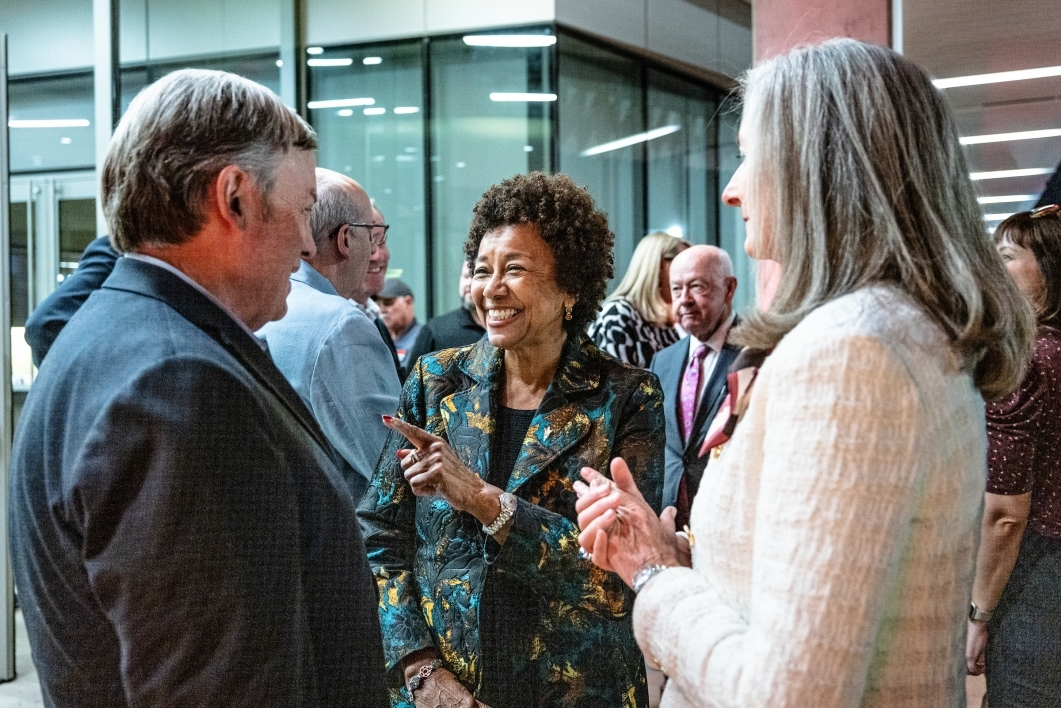 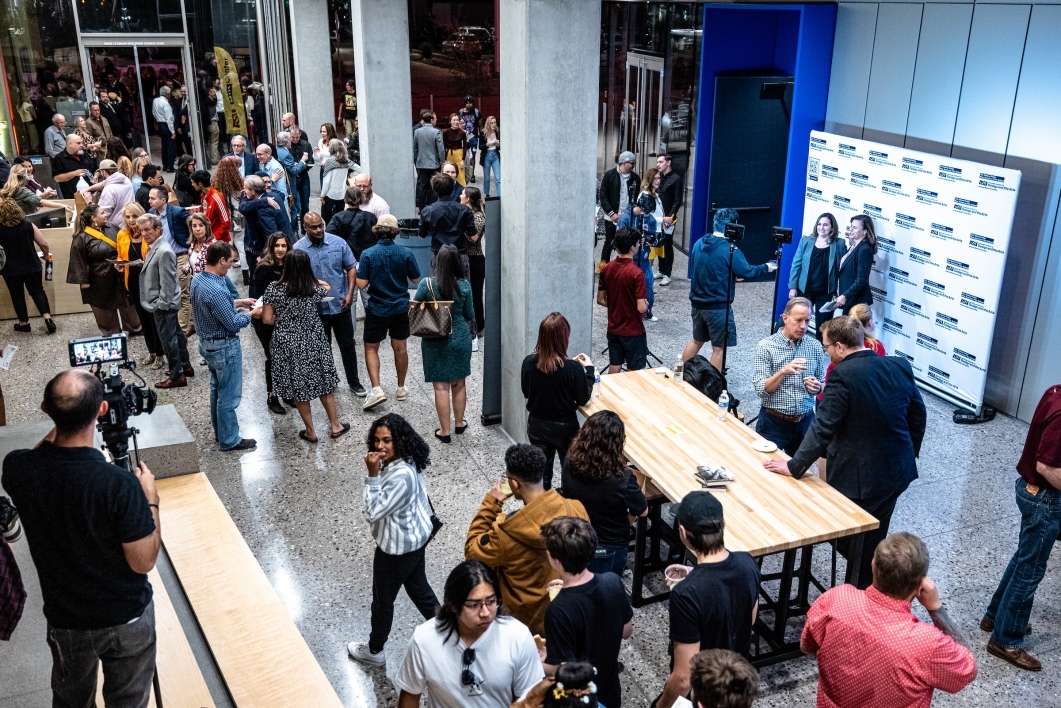 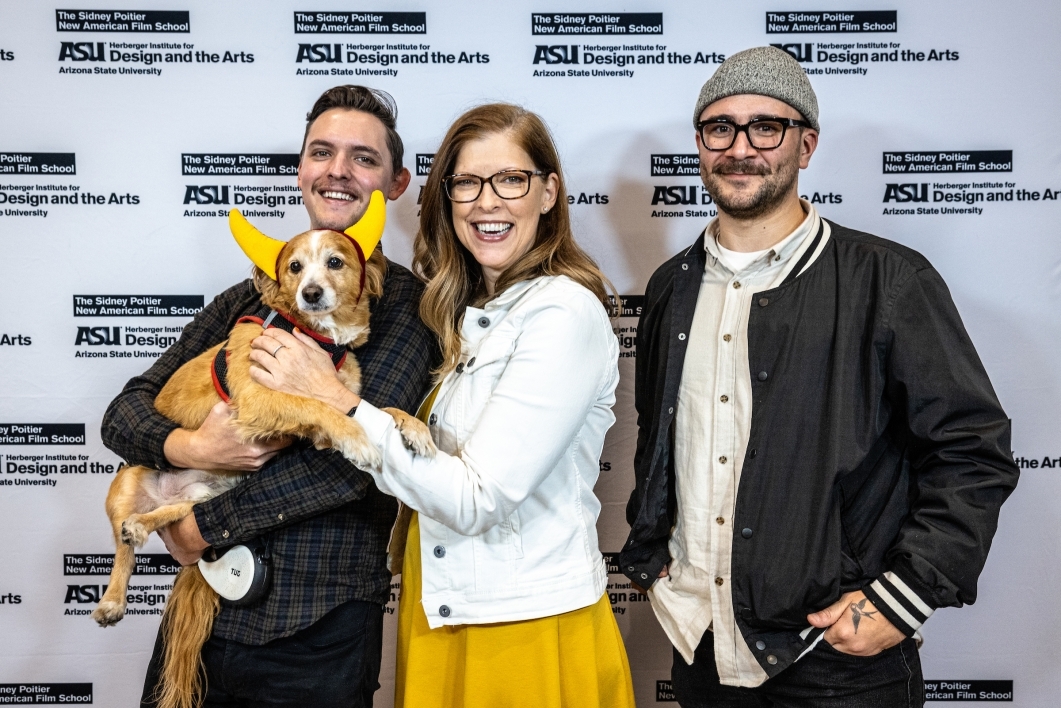 Steven Warnick (left), and his dog, Riley, pose with Leslie Easton and Jordon Johnson at the grand opening of MIX Center. Warnich works for the Holly Street Studio, the architecture firm involved with designing the center. Easton is the partnership manager for ASU Prep Digital, and Johnson was on hand to support his partner, Warnick. 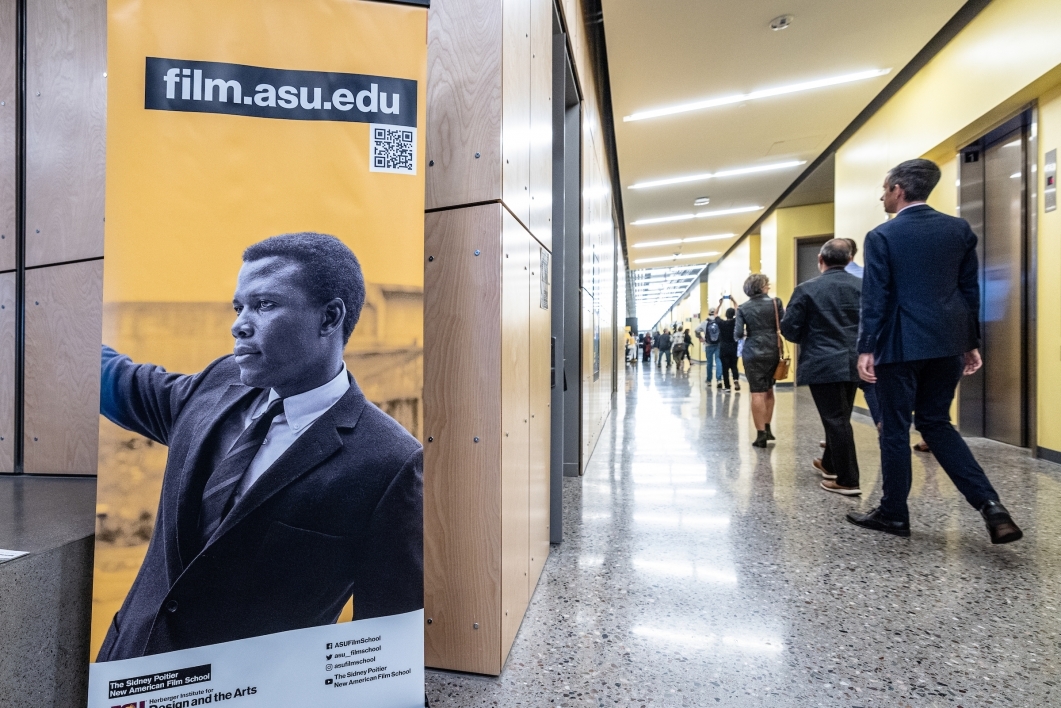 Photo courtesy of Herberger Institute for Design and the Arts 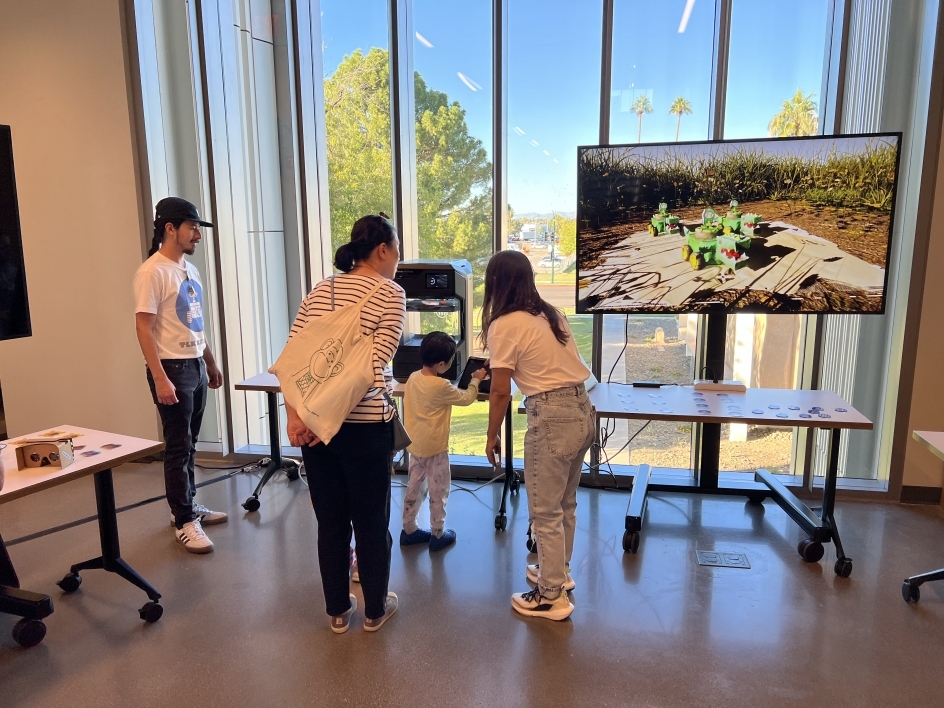 Community members participated in technology demonstrations in the MIX Center at a housewarming party on Saturday that also featured performances, trick-or-treating, food trucks and a screening of the movie "Coco."

Photo courtesy of Herberger Institute for Design and the Arts

The MIX Center, which opened to students at the beginning of the fall semester, houses The Sidney Poitier New American Film School's production and post-production programs, plus classes in digital media technology, worldbuilding, experience design and gaming from the Herberger Institute for Design and the Arts and the Ira A. Fulton Schools of Engineering.

A clip from the Apple documentary “Sidney” was shown at ceremony. Cheryl Boone Isaacs, founding director of The Sidney Poitier New American Film School, noted that over his life, the iconic actor and director talked about the importance of giving everyone an opportunity to tell their stories in film.

“The storytelling of humankind has been around forever, and now we are at a place where technology can help our storytellers excel,” she said.

“The MIX Center is going to allow our students to work with this new technology in a way that’s never been done before to bring their stories to life. We want our students to travel along the road that a story takes, from its inception all the way through to the audiences.”

The MIX Center is meant to be used by everyone in the Mesa community, according to Jake Pinholster, founding director of the MIX Center and executive dean in Herberger Institute for Design and the Arts. He described it as “a technologically advanced living room.”

“We have built it to be a space for public discourse, entertainment and cultural amenity, and as a space for education and advancement,” he said.

The opening celebration continued on Saturday at an all-day “housewarming party” for the community, which featured demonstrations of the technology in the MIX Center, panel discussions, trick-or-treating, games, food trucks, musical performances and a screening of the Pixar movie “Coco” on the giant outdoor screen.

Crow said that ASU @ Mesa City Center is a response to a rapidly changing economy.

“Anything that can be thought about in digital creativity can be done in this building.”

Crow said that the new complex is an example of how Arizona is on an upward trajectory.

“We’re building a new economy — an economy that’s built on creativity,” he said.