According to data from the United Health Foundation, 28.5% of pregnancies are unintended in the United States.

A team of biomedical engineering undergraduate students from the Ira A. Fulton Schools of Engineering at Arizona State University decided to help reduce that number. They chose to find a new way to balance the responsibility of birth control ownership between genders as their required senior capstone project. 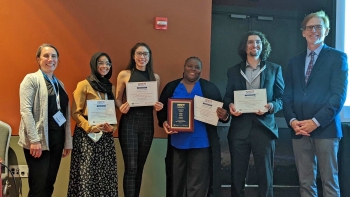 “Female methods tend to be more expensive than current male methods because most require one or more physician visits, and some methods involve a renewable prescription,” says Candace Pless, the team’s captain. “Female birth control has numerous potential side effects that affect female health.”

The team of five students, who all graduated after the spring 2022 semester from the School of Biological and Health Systems Engineering, part of the Fulton Schools, received a $15,000 VentureWell-sponsored Venture Prize in the 11th annual National Institutes of Health Design by Biomedical Undergraduate Teams, or DEBUT, Challenge.

The team was also recognized in October during the 2022 Biomedical Engineering Society Annual Meeting in San Antonio, Texas, for winning the Venture Prize.

Pless joined Gabriella Estrada and Fatiha Firoz, collaborators from prior group projects, to start the capstone team. The trio was then joined by classmates Anwar Gandi and Keiry Rodriguez to round out the team.

Together the group developed a concept called EMIT. It is a minimally invasive male contraceptive using an injectable hydrogel and chemical deactivator composite system that provides a completely reversible, double barrier to sperm movement through the vas deferens, which is the tube that carries sperm during ejaculation.

Why create a new male contraceptive?

According to the team, there is a market need for a product like this all over the world, especially in the United States.

Pless, who is currently pursuing her MBA at ASU’s W. P. Carey School of Business, says that four factors influenced the team to pursue a better solution to unplanned pregnancies.

First, the group recognized the current lack of easily accessible male contraceptives, and, secondly, that biological women typically bear the financial and health-related burdens of contraceptives.

The third factor is increased urgency for reliable contraceptive options as states continue to pass legislation banning or severely restricting abortions. Similar laws exist or are in progress in other countries as well.

“(The male contraceptive) could potentially be a new and effective solution to increase someone’s quality of life, no longer being forced to carry to term,” Pless says.

The final factor that inspired the project is the desire to provide an alternative solution to vasectomies. Having more available male contraceptive options would provide more balance to the responsibility of birth control ownership between biological men and women.

“Vasectomy reversal, a surgical procedure that reconnects the severed tubes, does not always guarantee restoration of proper function of the vas deferens due to a lack of blood flow in the formerly disconnected tissue, which can inhibit its ability to repair itself,” Pless says. “There is plenty of room for improvement and innovation over current contraceptive methods, especially for couples who prefer more socially and equitable gender-responsible male methods.”

As a novel male contraceptive, EMIT is designed to be minimally invasive. The process consists of injecting a non-hormonal polymer into the vas deferens to stop sperm motility prior to ejaculation.

Pless explains that EMIT creates two methods of stopping sperm in the vas deferens. It contains a physical barrier made of natural, biodegradable and nontoxic components that also releases microparticles that release a proprietary drug that stops sperm from moving further. The sperm are then absorbed back into the body, causing no harm to the patient.

Being a reversible contraceptive, EMIT uses a two-part process consisting of two solutions, known as A and B, to reverse the procedure when desired. Part A degrades EMIT, and part B will flush EMIT up the vas deferens and out the urethra.

This final prototype design of EMIT demonstrates a visual representation of how EMIT would be administered and the results of the reversal when requested to be taken out. Graphic courtesy of Candace Pless

The team was initially given a list for their capstone project of approximately 40 suggested problems for which they could develop a solution, along with the option of choosing their own idea. The team suggested their own idea to Jessica Weaver, an assistant professor of biomedical engineering.

Weaver says she has been impressed by the team from the beginning.

“This is one of the most unique and innovative projects to come through our new biological devices capstone track in biomedical engineering, and it was completely student-conceptualized, -driven and -led,” Weaver says. “It’s been an honor to be along for the journey. I can’t wait to see where it goes as this team works to commercialize their new venture.”

Pless says that the project started out roughly. However, she adds that anyone who had doubted the project’s success or thought it too controversial was shocked when they saw the working prototype in action.

“We definitely blew the minds of all non-believers,” Pless says.

When starting out on the project, the team discussed ideas for a new type of male contraceptive with Weaver, soon realizing they needed more information about the male reproductive system than the internet provided.

“Dr. Smith was able to give us a crash course in anatomy and physiology of the male reproductive system,” Pless says. “As we were learning, we started to narrow ideas down to what was actually feasible. Through Dr. Smith, we met a few of his colleagues to learn more about sperm function.”

The second expert the team talked to was Dr. Russell Hayden, a urologist in Pennsylvania with a subspecialty in male infertility and microsurgery. Hayden helped the team understand vasectomy reversal and how patients see him about how to conceive when a reversal is unsuccessful.

Pless also reached out to Sarah Stabenfeldt, an associate professor of biomedical engineering in the Fulton Schools with additional positions in the ASU School of Life Sciences, to get mentorship on biomaterials and assistance with finding lab space to build their EMIT prototype.

Weaver, Stabenfeldt and Vincent Pizziconi, an associate professor of biomedical engineering in the Fulton Schools, helped the team apply for the DEBUT Challenge.

“Having witnessed the winners of the NIH DEBUT/VentureWell national design competition since its inception, it was clear the EMIT team and their technology was well prepared and poised to be competitive,” Pizziconi says. “But I never cease to be elated that they beat out all the top universities in the country for this highly envied Venture Prize.”

Through the knowledge of all their mentors, the team was able to modify EMIT as a viable solution.

The future of EMIT

Pless and Estrada plan to pursue this technology further. They formed a limited liability company together in May, MTology Innovations, and have filed a patent on their technology.

Currently, the company is working toward finalizing the second barrier of protection and expanding intellectual property internationally within the next 24 months.

They also intend on participating in additional venture competitions and the VentureWell E-Team Program. Their hope is to gain as much mentorship as possible to propel EMIT through the next stages of development and to the market in the future.

“Providing an available male contraceptive is a step toward reproductive justice,” Pless says. “It creates greater equality in family planning and a better balance of responsibility, both socially and financially.”

Arizona State University School of Music, Dance and Theatre alumna Caelan Creaser returns to Sun Devil territory as an ensemble member and the understudy for the lead character of Elsa in Disney’s North American tour of “Frozen.”From the producer of “The Lion King” and “Aladdin,” “Frozen,” the Tony-nominated best musical is touring across the country, providing audiences with ...

Arizona State University School of Music, Dance and Theatre alumna Caelan Creaser returns to Sun Devil territory as an ensemble member and the understudy for the lead character of Elsa in Disney’s North American tour of “Frozen.”

From the producer of “The Lion King” and “Aladdin,” “Frozen,” the Tony-nominated best musical is touring across the country, providing audiences with sensational special effects, stunning sets and costumes, and powerhouse performances. 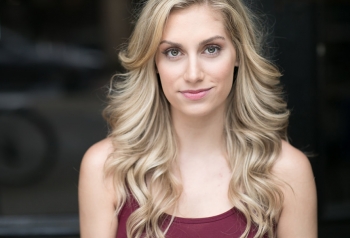 Caelan Creaser earned a bachelor's degree in musical theater and a minor in communication from ASU in 2019. Download Full Image

Creaser, who earned a bachelor's degree in musical theater and a minor in communication from ASU in 2019, will make her way back to the ASU Gammage stage in a two-week run beginning Wednesday, Feb. 22, with performances through Sunday, March 5.

In a 2020 interview with ASU News, Creaser expresses her love and gratitude for ASU, acknowledging that she wouldn’t be where she is today without the skills she gained from ASU classes and professors.

“My ASU professors — Carole FitzPatrick, Robbie Harper, Dale Dreyfoos, Brian DeMaris and Molly Lajoie, to name a few — truly changed my life,” Creaser said. “They challenged me every day in class to work harder and become a truly well-rounded performer and artist.”

Tickets for “Frozen” will go on sale to the public on Monday, Nov. 14, at 10 a.m. Tickets will be available at the ASU Gammage Box Office and online at asugammage.com.