The Lincoln Center for Applied Ethics unveiled its Humane Technology Tarot Deck during ASU Humanities Week, an annual event showcasing the many schools and centers under The College of Liberal Arts and Sciences’ humanities division.

This mini tarot deck encompasses months of collaborative research investigating how scholars can initiate human-centered conversations around technology and our imagined futures. 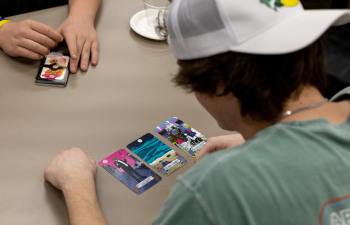 “The humanities are uniquely poised to explore our past, to analyze our present and to think critically about the future we are shaping,” said Elizabeth Langland, director for the Lincoln Center. “And that happens through a variety of humanities disciplines.”

The preliminary research that inspired the Humane Technology Tarot Deck emerged from the Lincoln Center’s Humane Tech Design Studios, a hub for conversations that bring together academics, technologists and changemakers to begin identifying and addressing the problems of both existing and emerging technologies.

“(We wanted) to ask questions not about what technology can do, but what we as humans want and need technology to do,” Langland said.

In reflecting on one of these sessions, Gaymon Bennett, associate director of the Lincoln Center, shared a memory about a key participant who noted how the studios combined both a high-quality discussion and room for nuance: “‘I wish there was a way that our outputs were something that had that same richness but were also open-ended,” he said.

Thus began the process of developing the mini-tarot deck. Over the course of several months, the team at the Lincoln Center and other collaborators developed moodboards with themes and influences from the post-apocalyptic, solarpunk, steampunk and neo-Tokyo genres. This process included adapting interpretations of the traditional major arcana, or the fool’s journey.

“Narrative storytelling decks are not necessarily always about seeing the future, but seeing ourselves and our societies more clearly so we can imagine futures,”  said Liz Grumbach, manager of digital humanities and research.

During the event, students and guests were invited to conduct “readings” by interpreting artwork from the cards as visual cues of their past, present and future. Artist Neil Smith collaborated with the team at the Lincoln Center to reimagine the classic tarot  imagery into portraits that displayed the ongoing tension, tangle and integration between nature and technology.

“We talked early on about it being a bit dreamy, a bit abstract, even slightly strange,” Smith said.

Some of the cards depict crumbling city landscapes, with greenery encroaching at the corners that hints at reclamation. Others were centered on people, both cyborg-like and ethereal.

“Some illustrations are like total Frankenstein’s monsters," Smith said. 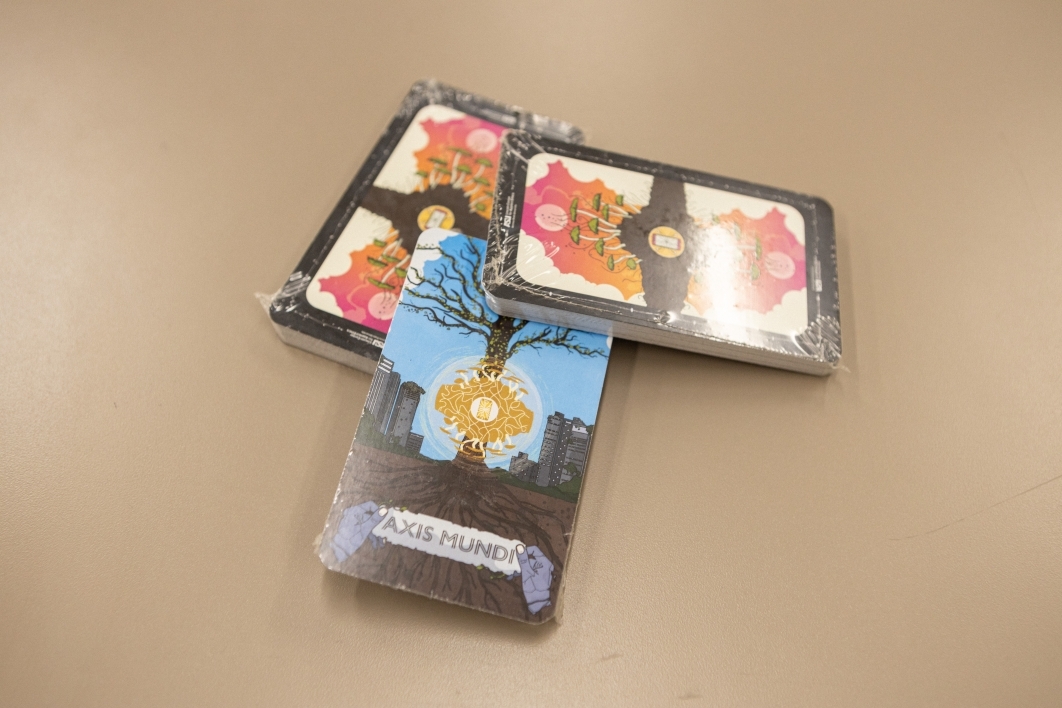 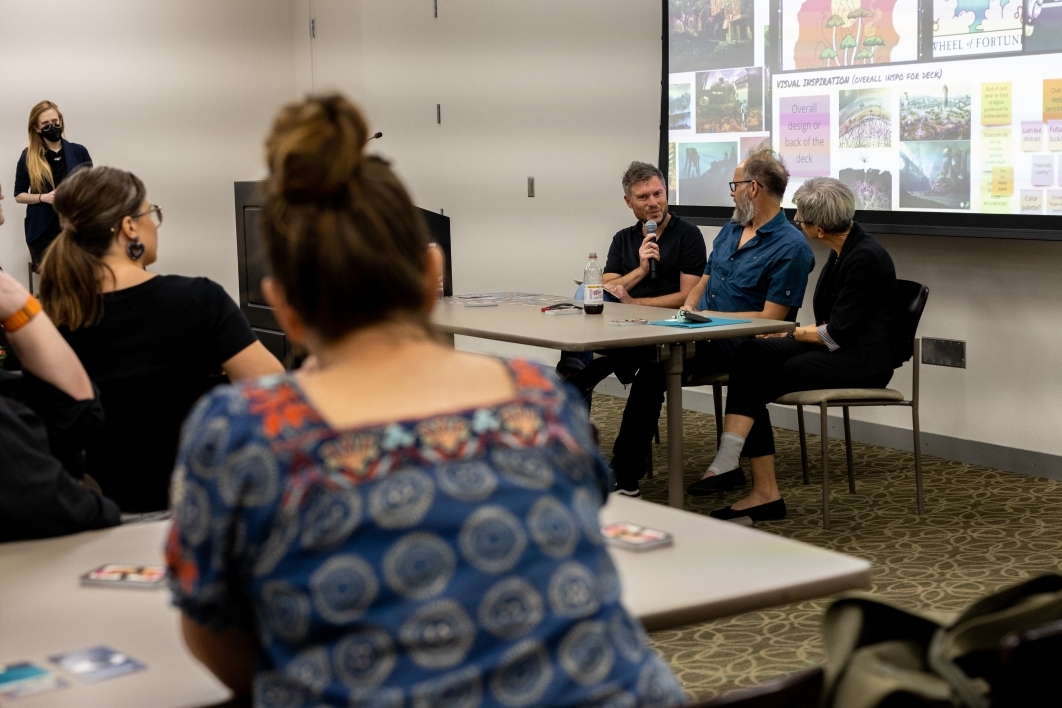 From left to right: Neil Smith, Gaymon Bennett and Elizabeth Langland during Q&A. 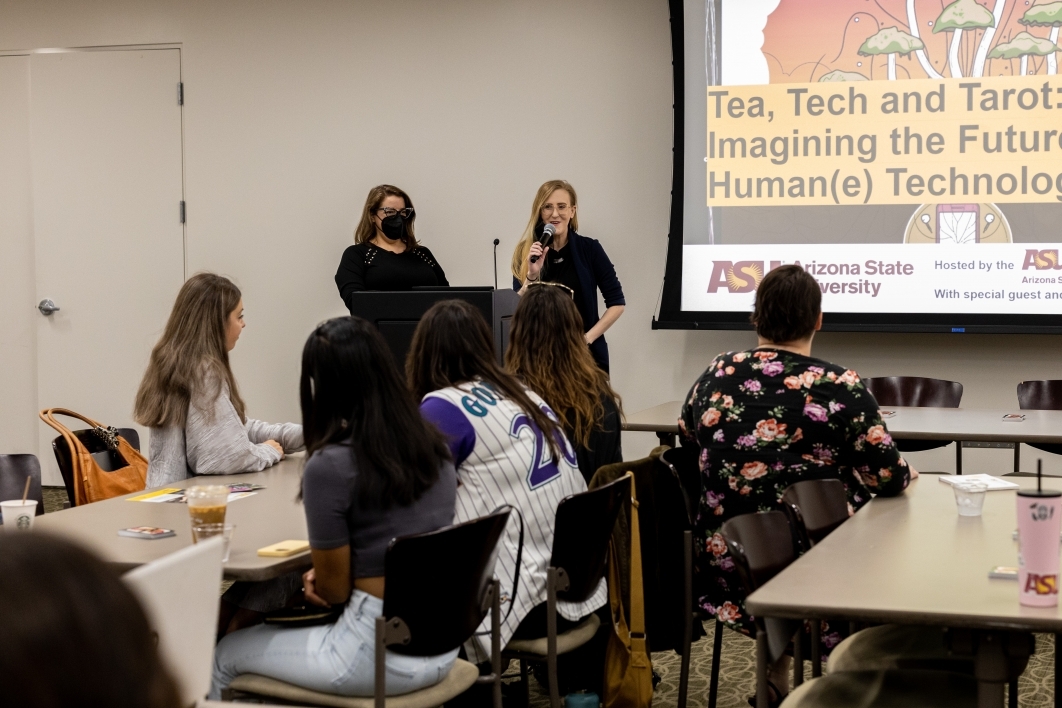 From left to right: Erica O’Neil and Elizabeth Grumbach lead attendees on reading the tarot cards.

When asked how he connected to the project’s main theme, creating a human-centered technological future, Smith said, “It’s funny for me because I am a digital illustrator, and for the vast quantities of my days, I’m a cyborg plugged into my Macbook.

“This world I live in, this technological age — it’s indistinguishable from magic. I couldn’t tell you what’s going on behind my Macbook screen … yet I’m entirely dependent on it for my living and my creative expression.”

Students and faculty can expect to see future events from the Lincoln Center focusing on the Humane Technology Tarot Deck, and guests who joined the event at Humanities Week all received their own set of cards to take home.

"The Lincoln Center is very much committed to the idea that the knowledge and outputs that we bring into the world are and need to be co-designed,” Bennett said. “What that means in practice is making sure you consider again and again whose voices are and are not in the room and how (they) are and are not being heard.”