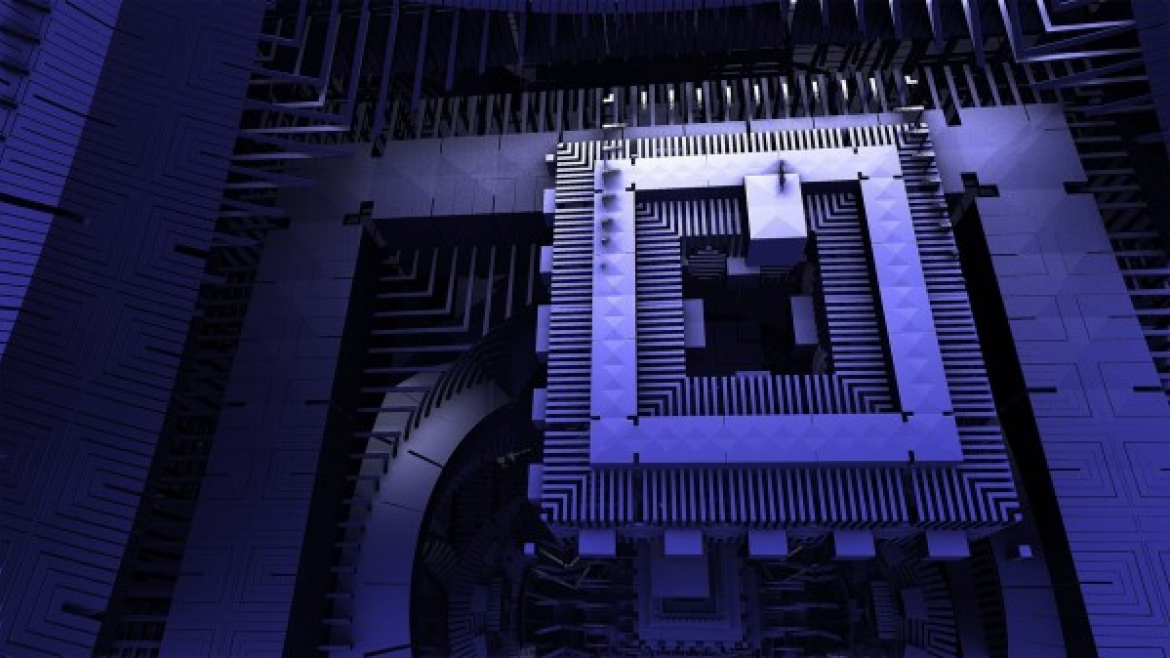 Researchers from Arizona State University and Zhejiang University in China, along with two theorists from the United Kingdom, have been able to demonstrate for the first time that large numbers of quantum bits, or qubits, can be tuned to interact with each other while maintaining coherence for an unprecedentedly long time, in a programmable, solid state superconducting processor.

Previously, this was only possible in Rydberg atom systems.

In a paper that was published on Thursday, Oct. 13, in Nature Physics, ASU Regents Professor Ying-Cheng Lai, his former ASU doctoral student Lei Ying and experimentalist Haohua Wang, both professors at Zhejiang University in China, have demonstrated a “first look” at the emergence of quantum many-body scarring (QMBS) states as a robust mechanism for maintaining coherence among interacting qubits. Such exotic quantum states offer the appealing possibility of realizing extensive multipartite entanglement for a variety of applications in quantum information science and technology to achieve high processing speed and low power consumption.

“QMBS states possess the intrinsic and generic capability of multipartite entanglement, making them extremely appealing to applications such as quantum sensing and metrology,” Ying said.

Classical, or binary, computing relies on transistors – which can represent only the “1” or the “0” at a single time. In quantum computing, qubits can represent both 0 and 1 simultaneously, which can exponentially accelerate computing processes.

“In quantum information science and technology, it is often necessary to assemble a large number of fundamental information-processing units – qubits – together,” Lai said. “For applications such as quantum computing, maintaining a high degree of coherence or quantum entanglement among the qubits is essential.

“However, the inevitable interactions among the qubits and environmental noise can ruin the coherence in a very short time — within about 10 nanoseconds. This is because many interacting qubits constitute a many-body system." 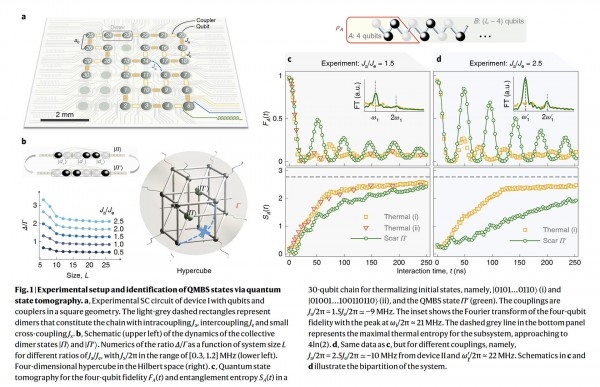 Key to the research is insight about delaying thermalization to maintain coherence, considered a critical research goal in quantum computing.

“From basic physics, we know that in a system of many interacting particles, for example, molecules in a closed volume, the process of thermalization will arise. The scrambling among many qubits will invariably result in quantum thermalization – the process described by the so-called Eigenstate Thermalization Hypothesis, which will destroy the coherence among the qubits,” Lai said.

According to Lai, the findings moving quantum computing forward will have applications in cryptology, secure communications and cybersecurity, among other technologies.

Don’t let anyone tell you what you can’t do.That was the message Amy Van Dyken-Rouen delivered to a group of Arizona State University College of Health Solutions students on Oct. 19 at the Engrained Cafe in downtown Phoenix.Van Dyken-Rouen, the six-time Olympic swimming gold medalist, spoke to the assembled students as part of the College of Health Solutions 10th anniversary festivities. Van... 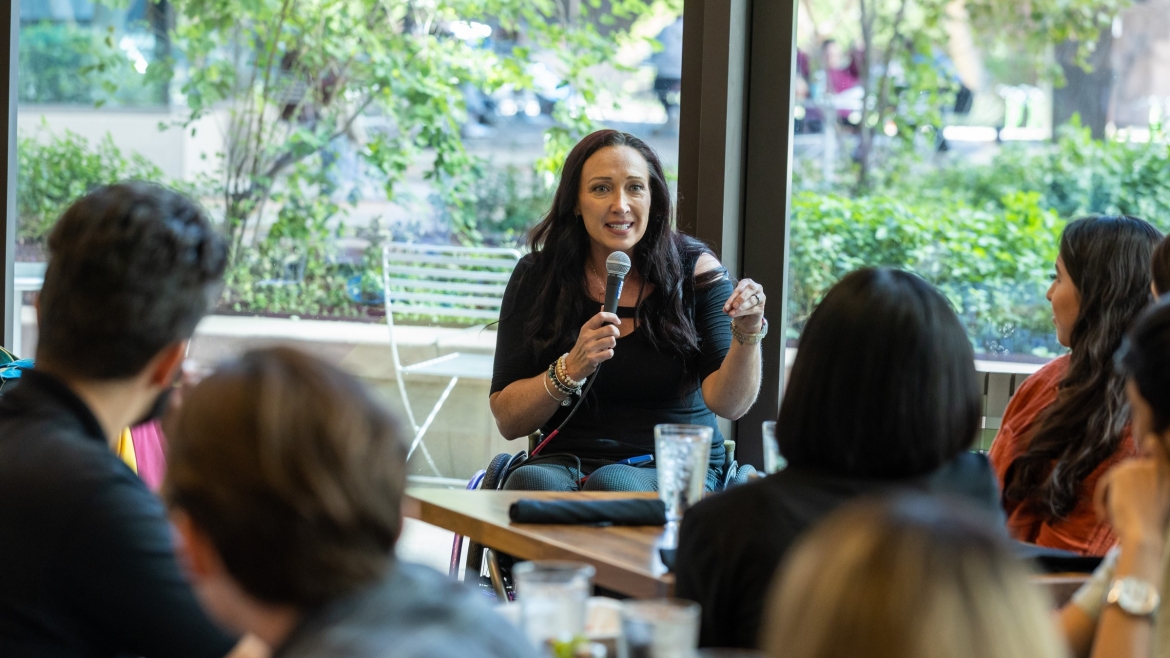 Don’t let anyone tell you what you can’t do.

That was the message Amy Van Dyken-Rouen delivered to a group of Arizona State University College of Health Solutions students on Oct. 19 at the Engrained Cafe in downtown Phoenix.

Van Dyken-Rouen, the six-time Olympic swimming gold medalist, spoke to the assembled students as part of the College of Health Solutions 10th anniversary festivities. Van Dyken-Rouen was also the keynote speaker at the college’s Celebration of Health event later that evening.

Van Dyken-Rouen earned Olympic fame at the 1996 Olympics in Atlanta as well as the 2000 games in Sydney. She spoke of the challenges she faced in the pool and out as she became the first American female athlete to win four gold medals in a single Olympics in 1996 and overcame injuries to compete again in 2000.

She also spoke of the more substantial challenges she faced following a 2014 ATV accident in Show Low, Arizona, that left her paralyzed from the waist down. The severe spinal cord injury almost took her life, and she said she still endures daily pain as a result — but it didn’t take her enthusiasm for life.

Van Dyken-Rouen still competes at a world-class level as a CrossFit athlete. Since her accident, she’s also gone skydiving with Navy SEALs and regularly rock climbs.

“Every day is an awesome day,” Van Dyken-Rouen said. “And I try to learn something about myself every day.” 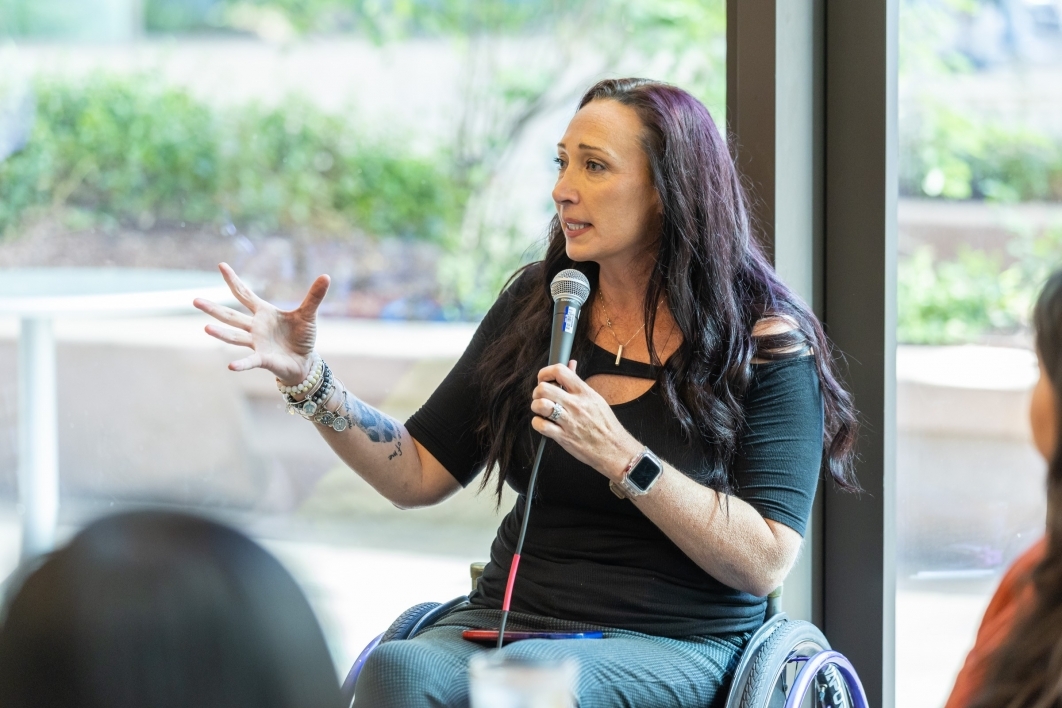 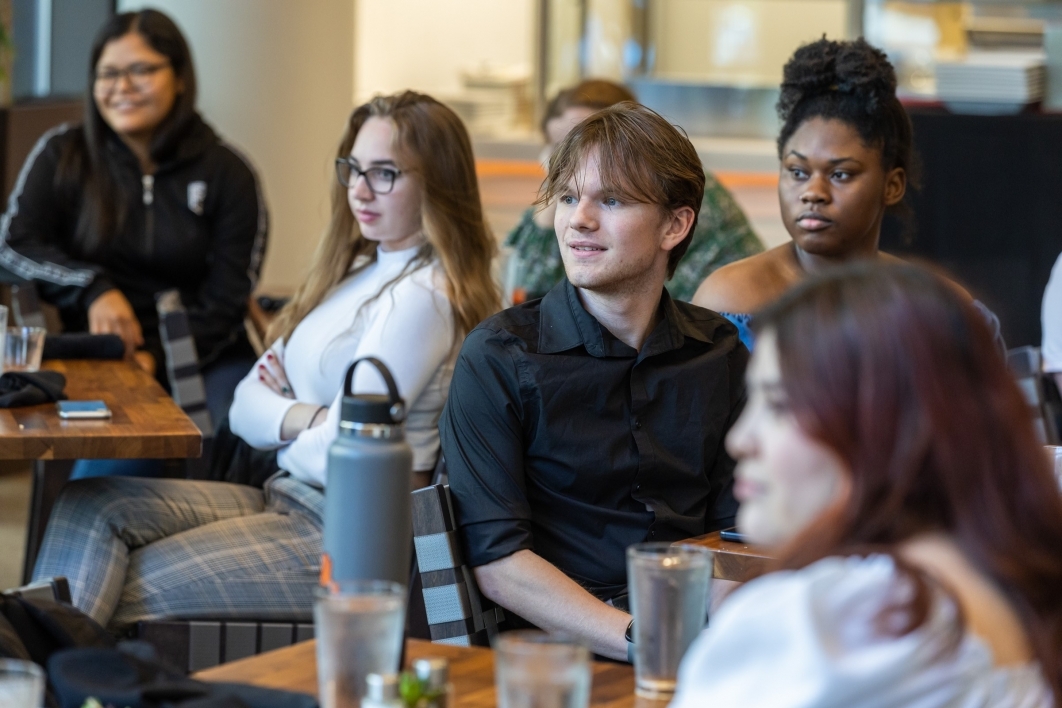 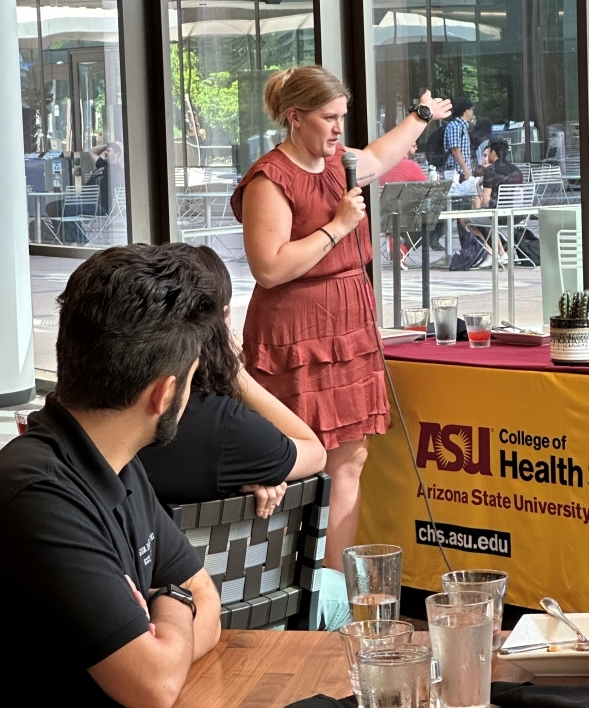 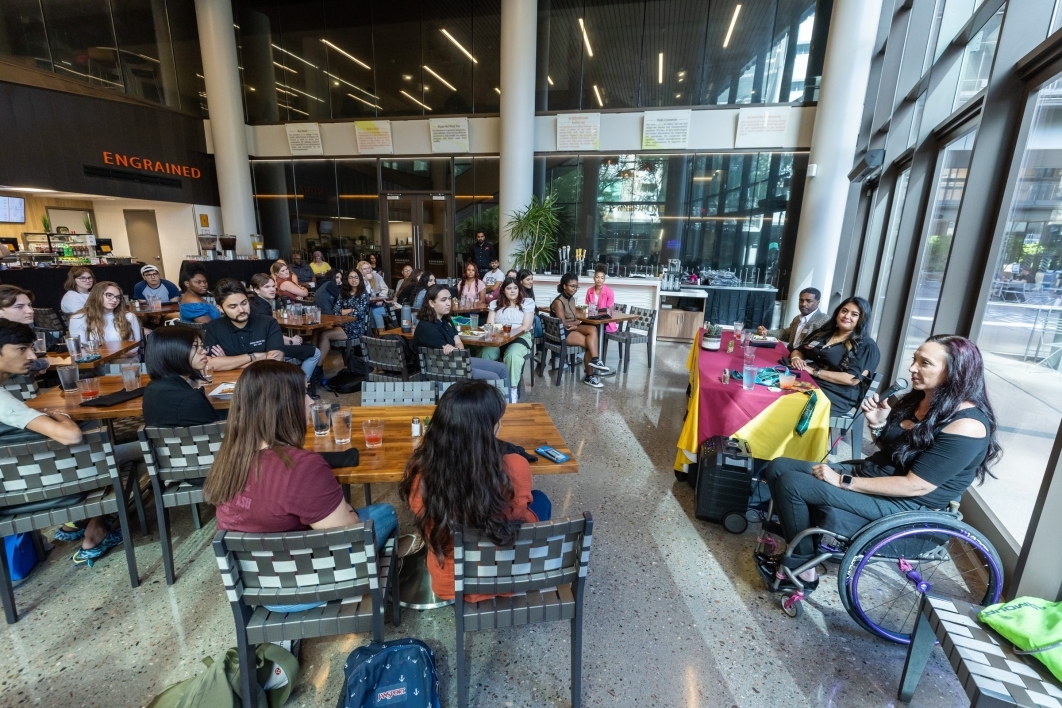 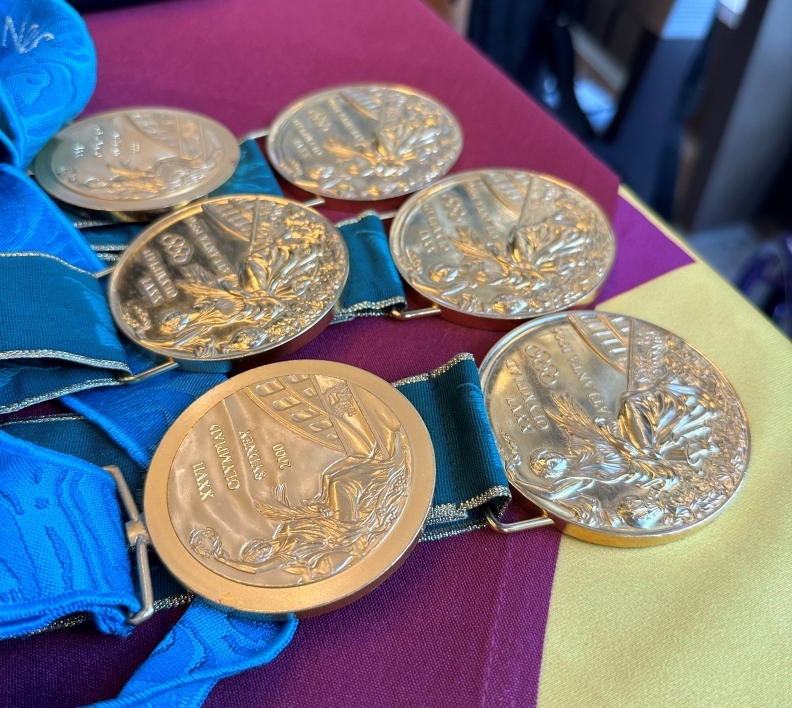 Olympic gold medalist Amy Van Dyken-Rouen brought her medals along to a talk with College of Health Solutions students on Oct. 19.

She encouraged the students, many of whom will go on to work in the health care field, to take that same approach to their lives.

“There will be bad days and things are going to bring you down,” Van Dyken-Rouen said. “But keep going. What you’ll do for people like me will be great.

“When something knocks you down, learn from it.”

“It touched my heart and soul,” Barwick said. “I teared up. Despite her struggles, she keeps going. It made me want to pursue my dreams even more.”

Barwick aspires to be a sports dietitian and work with elite, Olympic-level athletes.

Gabriela Vega, a junior, said it was great to witness Van Dyken-Rouen’s energy and enthusiasm. Van Dyken-Rouen brought her gold medals and passed them around. The students took selfies with the medals and Van Dyken-Rouen, who stayed after her talk to answer one-on-one questions.

“There wasn’t a dull moment with her,” Vega said. “She knows how to keep everyone engaged. The most inspiring thing was how she doesn’t let negativity from others deter her plans for the future.”

As Van Dyken-Rouen wrapped up her speech, she encouraged the students to persevere no matter what challenges they might face and to do whatever they need to do to stay motivated.

“If someone tells you that you can’t do something, just say, ‘Who are you to tell me what I can’t do?’” she said.