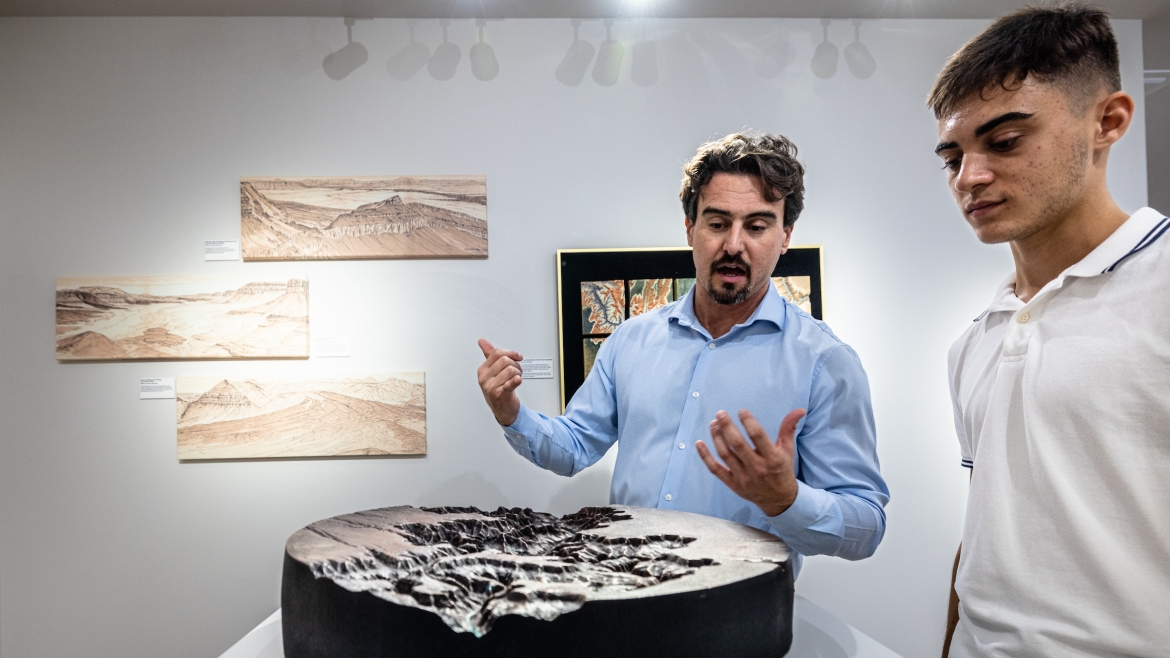 Clarence Dutton's 1882 work on Grand Canyon was a geological 'masterpiece'

Oh, people might have read John Wesley Powell’s 1875 book, ultimately titled “The Exploration of the Colorado River and Its Canyons,” but the book wasn’t so much a deep dive into the size, beauty and geology of the Grand Canyon as much as it was a tale of the Wild West.

“It was meant to be a geological treatise, but it was actually written more as an adventure novel because he needed to sell it and get more appropriations from Congress,” said Matthew Toro, director of maps, imagery and geospatial services at the ASU Library. 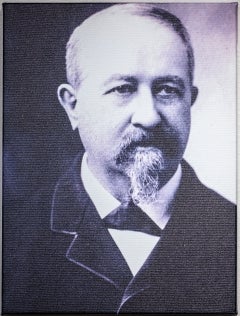 A portrait of Clarence Dutton is on display as part of the ASU Library's "Dutton’s Atlas" exhibit. Photo by Charlie Leight/ASU News

To celebrate the 140th anniversary of Dutton’s work, the ASU Library, along with support from Arizona State University's Institute for Humanities Research, the School of Geographical Sciences and Urban Planning, the School of Earth and Space Exploration, and a grant from Arizona Humanities, has created an interactive exhibit titled “Dutton’s Atlas: How Cartography Helped the Canyon Become Grand.”

The exhibit, which includes digitized versions of Dutton’s six maps and complementary physical items from the canyon, will be available for public viewing beginning Oct. 22, on the first floor of the Hayden Library on ASU's Tempe campus.

A symposium featuring several speakers on topics such as geology and photography of the canyon will be held at the exhibit kickoff that Saturday, from 11 a.m. to 4 p.m., and the physical exhibit will be open at least through the end of this semester and possibly into the spring semester, Toro said.

The digital replica of the exhibit is available here.

Several students also worked on the project, most notably Paityn Schlosser, a senior geology major who admitted she really had no idea what she was getting into when she saw the 20-hours a week job pop up on an email chain.

“I didn’t think I had any chance,” Schlosser said. “I applied and Matt emailed me on a Friday and said, ‘Can you come in at 4 p.m. for an interview?’ 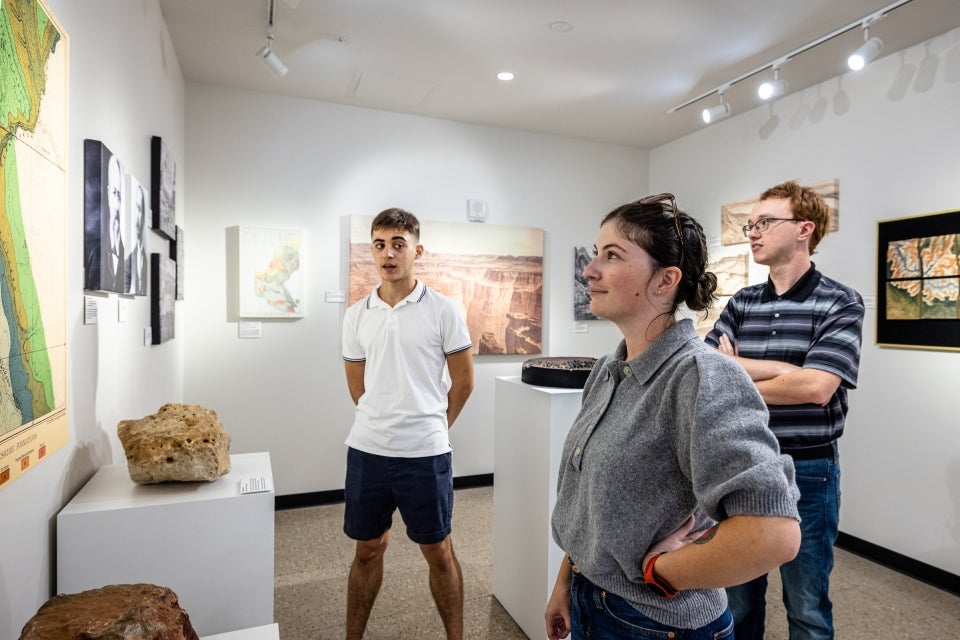 The exhibit will highlight Dutton’s work in a variety of ways, including the prose he used to describe the canyon. In one writing, he begins, “The Grand Canyon of the Colorado is a great innovation in modern ideas of scenery and in our conceptions of the beauty and power of nature.”

Viewers of the exhibit will also see the three illustrations from Holmes’ Panorama from Point Sublime, a 3D-printed and hand-painted map puzzle, and three rocks from the Grand Canyon collected by Semken, and have the opportunity to use an interactive online multimedia exhibit that curates the atlas with maps, images and video.

“You can literally come and touch and feel the rocks. You can see what the state of geographical knowledge was back in the late 19th century,” Toro said. “The most important part, really, is that we’ve digitized all of the actual maps from Dutton’s Atlas and put them into real-world geographical coordinates. So the user will have the option to overlay these maps with modern geological data on a touch screen. They can really see the way the state of geological knowledge has evolved over the last 140 years.”

Schlosser said she hopes that when people see the exhibit, “they get the enjoyment of geology and they understand the importance of understanding what’s beneath us.”

“A lot of people commonly associate geology with just a blow-off science,” Schlosser added. “This is one of the most informational-based sciences that you could ever do. I hope it piques some people’s interest and hopefully more people will go to the Grand Canyon and get to see what it’s all about.”

Now in her last semester of college at Arizona State University, Lauren Pukalo is reflecting on her passions, deeply influenced by her background and upbringing as a first-generation Cuban American. Growing up with a strong knowledge of her heritage gave Pukalo a sense of pride. “As one of the first women in my family to attend college, I see how my family’s experience can help serve me in c...

Now in her last semester of college at Arizona State University, Lauren Pukalo is reflecting on her passions, deeply influenced by her background and upbringing as a first-generation Cuban American.

Growing up with a strong knowledge of her heritage gave Pukalo a sense of pride. 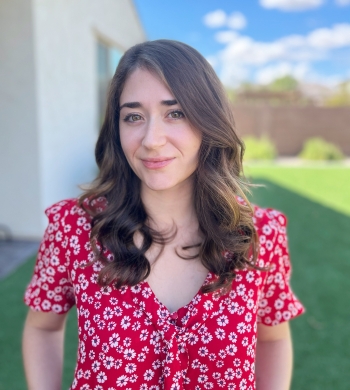 “As one of the first women in my family to attend college, I see how my family’s experience can help serve me in continuing to empathize with others while pushing to make a difference in our world,” she said.

Pukalo has utilized her political science major to gain a valuable perspective on people and culture, useful for diplomacy and international relations.

With a will for change, she has spent the majority of her academic career conducting research and gaining hands-on experience across the borders of the world.

Through the ASU World Innovators Program, Pukalo virtually worked with Jerlie Requerme, a Supreme Court Justice in the Mindanao region of the Philippines, on a project that addressed the digital divide that primarily affects Indigenous communities while simultaneously seeking efficiency and transparency in the judicial branch.

Pukalo said she learned about the challenges that can come from bureaucracy, wanting to change the status quo and working to leave something better than you found it during her internship.

“It gave me the confidence to hone my authenticity and take initiative,” Pukalo said, as she reflects on her involvement in the ASU World Innovators Program.

Through the program, she also had the pleasure of assisting the Australian-American Leadership Dialogue in Washington, D.C., where she learned the values of communication, dedication and teamwork despite cross-cultural differences.

Pukalo’s initiative to partake in many career-building opportunities led her to her current position working as a Diplomacy Podcast Intern with the Leadership, Diplomacy and National Security Lab.

As an analytical person, Pukalo revealed that the internship challenges her to work on communication and marketing skills. She enjoys integrating her science orientation with her creative side to improve all aspects of the podcast, including coverage material and gauging a diagnostic understanding of the listeners.

“I honestly cannot speak highly enough of the faculty and the lab,” Pukalo said.

“I’ve learned so much from the faculty; they truly care about the students and are willing to help by providing opportunities and resources. All in all, the experience has really helped influence my path and future career.”

Pukalo gives thanks to ASU for providing her with a world-class education where she encountered nurturing professors that contributed to her learning and curiosity about key issues in the world.