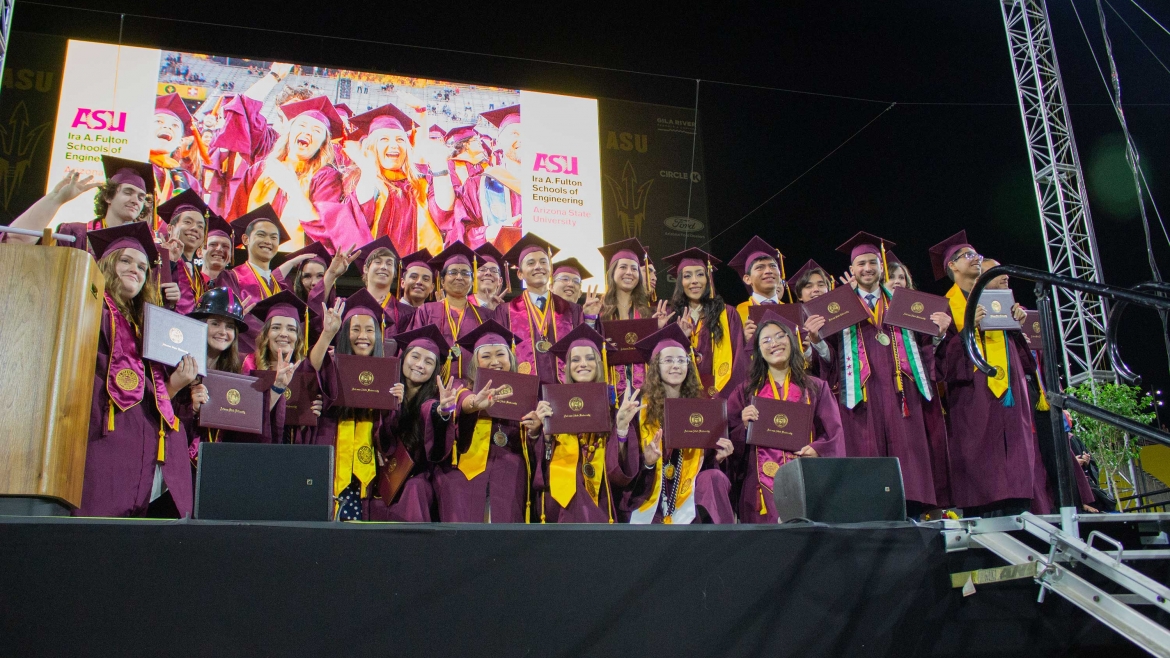 The Ira A. Fulton Schools of Engineering has reached an impressive milestone — student enrollment hit a high of 30,000 students this fall.

“We have a lot of stability in terms of programmatic direction, leadership and faculty growth,” said Squires, who also serves as ASU’s vice provost for engineering, computing and technology. “We have become adept at delivering programs that matter.”

The commitment to providing a “high quality” education is evident in every aspect of the Fulton Schools — from what students experience inside classrooms, including world-class faculty and labs, to outside opportunities for research, internships and career events.

And this has not gone unnoticed.

“This is an engineering college that is widely recognized around the country,” Squires said. “Prospective students and their parents are very impressed when they come to campus.” 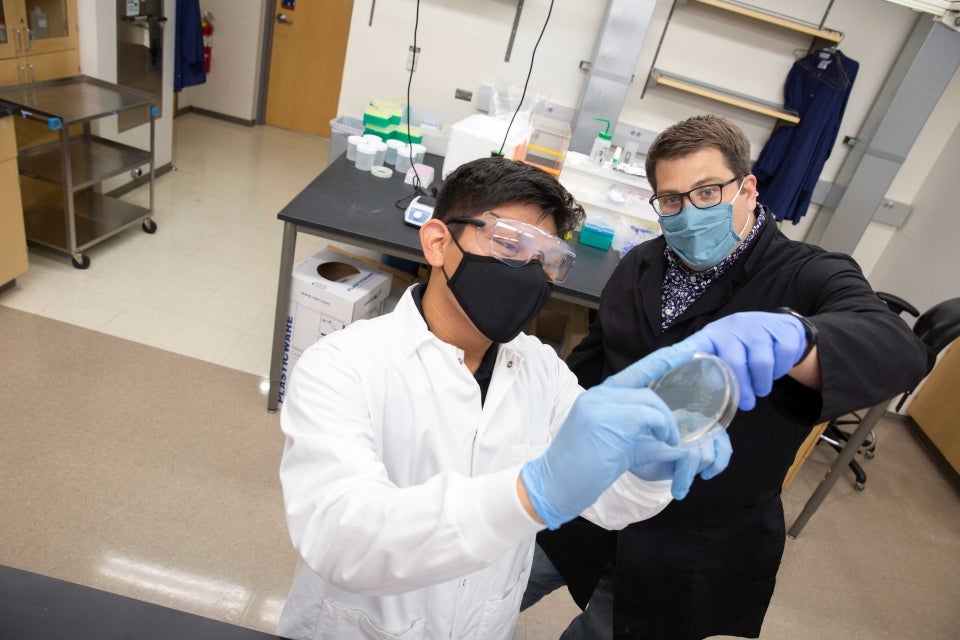 The Fulton Schools placed No. 33 overall in the 2022–23 U.S. News & World Report’s ranking of undergraduate programs, out of 212 universities included in the survey, and placed No. 19 among public universities.

In addition to that, ASU ranked:

The STEM ranking puts the university on par with some of the top schools in the country (ahead of MIT and Stanford University), and ASU's innovation ranking distinguishes it from every other university in the U.S.

The Fulton Schools also offers high quality education for remote learners around the world. The following online graduate specialties are among the top in the nation:

These rankings reflect an overall commitment to what the college calls the Fulton Difference — a group of programs created to build a culture that helps students stay connected with faculty and each other.

The Fulton Difference started as an orientation program but has grown to be a collection of services and programs that support student organizations, undergraduate students in research projects and teaching and entrepreneurship.

“That’s what we have developed over many years,” Squires said. “It refers specifically to all of the outside activities we want students to become involved with. … There are a lot of pathways to being successful. All of these things add up.”

Academic offerings for every aspiring engineer

While rankings certainly attract students to the Fulton Schools, it is also its breadth of degree programs that have led to the dramatic increase in enrollment.

“We attract students because we're so broad. We've got most engineering disciplines and related disciplines covered — everything from students designing airplanes to students flying airplanes,” said Jim Collofello, vice dean and professor in the School of Computing and Augmented Intelligence, which is part of the Fulton Schools.

Beyond that are the opportunities afforded to those attending a college located in metropolitan Phoenix, where the tech industry is booming. The school has cultivated partnerships with companies such as Boeing, Honeywell and many others, including Lucid Motors.

“We are the only intensive college research institution in this area,” said Michael McBride, director of student recruitment for the Fulton Schools. “We are very attractive locally and nationally because of that. It is really all of these things that make the difference.” 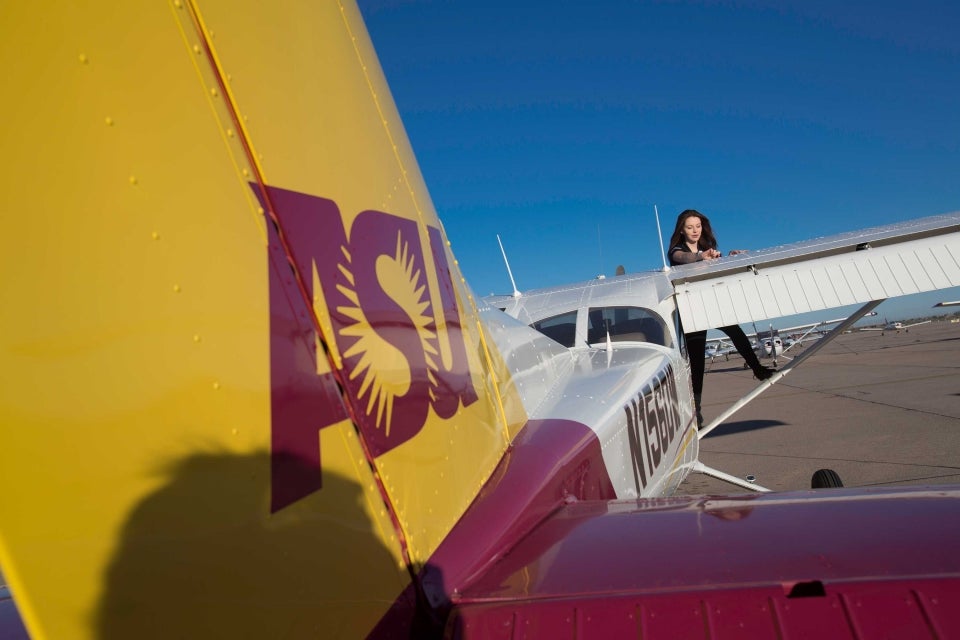 "(We have) everything from students designing airplanes to students flying airplanes," said Jim Collofello, vice dean and professor in the School of Computing and Augmented Intelligence. Photo courtesy the Ira A. Fulton Schools of Engineering

Giving accreditation where it is due

In addition to record enrollment and notable rankings this semester, all of the engineering schools have distinguished themselves with a stamp of approval from the prestigious Accreditation Board for Engineering and Technology (ABET).

Having that many programs accredited at one time, for the next six years, is considered unusual.

“In my experience, it has never happened,” Squires said. “It’s a real breakthrough.”

But this is no small task.

Accreditation is a rigorous process that requires representatives from all 18 programs to meet with an external review team from ABET.

“They come in on a Sunday and leave on Tuesday,” explained Collofello, who leads the accreditation process at ASU’s Fulton Schools. “They interview students, industry professionals and faculty. And it is not just a one-time thing.”

ABET evaluates the college’s curriculum, content and, most importantly, its commitment to continuous improvement.

The nonprofit works with universities around the world to assure that they meet the quality standards for the profession that students will enter upon graduation.

Susanna Westersund, a civil engineering major, is one of many who has benefited from her time at the Fulton Schools. But attending a university in Arizona was not her original plan.

When she graduated from high school, Westersund was set on going out-of-state for college but soon discovered all that the Fulton Schools had to offer.

The fourth-year student said she has had more research and internship opportunities than her friends at other universities.

“Because we are such a large research institute, we have the same opportunities as kids at the Ivies. Maybe more,” Westersund said. “Everything I have gotten to do has been super awesome.”

For Darius Guerrero, pursuing an undergraduate and master’s degree at the Fulton Schools has not impeded his ability to work full time at the Washington Post and travel around the world — all at the same time.

Guerrero originally attended Santa Barbara City College but financial constraints forced him to drop out and get a job. When he decided to go back to school, he looked for a program that would allow him to remain in Southern California and work full time.

ASU turned out to be that place.

“I was drawn to ASU's online courses, as I was based in Southern California,” said Guerrero, who was accepted into the graphic information technology program at the Fulton Schools in spring 2020. “There was the breadth of programs that I could attend, and it was all remote.”

Returning to school after many years was challenging for Guerrero.

“It had been a while,” said Guerrero, “but I carried on, working a 10-hour day, taking a nap at 7 p.m., chugging iced coffee to stay awake, and completing my schoolwork from 8 p.m. until midnight. I was thankful that ASU was so accommodating with classes and that I never had to step foot on campus to complete my degree.” 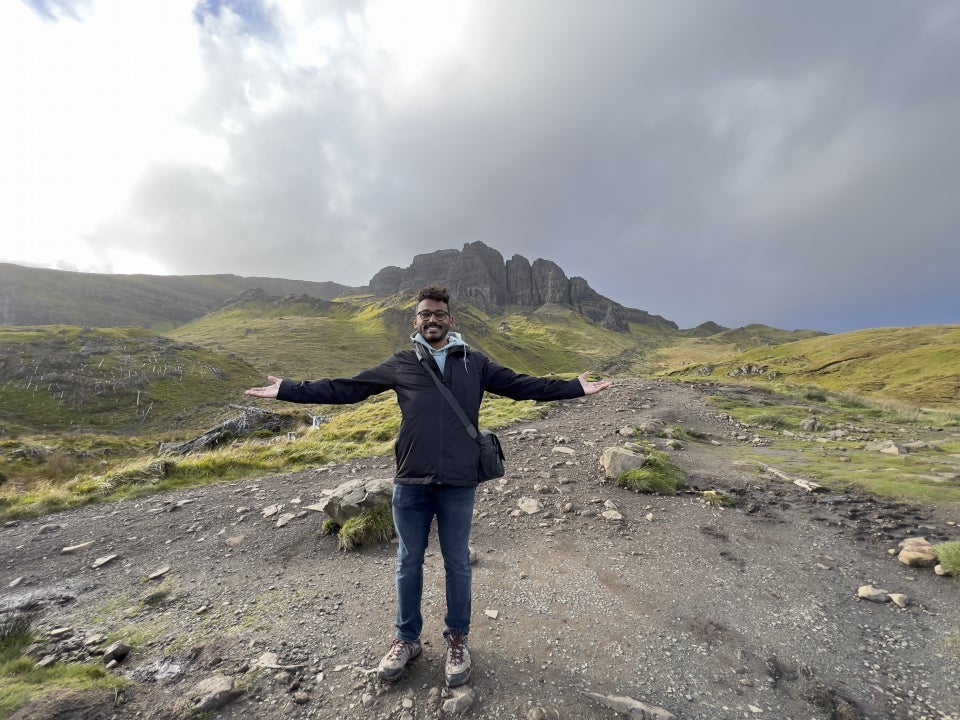 Darius Guerrero was able to pursue his degrees at the Fulton Schools, work full time at the Washington Post and travel around the world — all at the same time. Photo courtesy Darius Guerroro

While at ASU, Guerrero saw a position for a remote UX designer at the Washington Post. He applied and got the job. His classes at the Fulton Schools contributed to his success.

“It was interesting. I was taking courses around user experience and we had a module in user testing and personas,” he said. “Then, the following week, I used the knowledge learned in the course to help me at work.”

Since starting at the Washington Post, Guerrero graduated with a bachelor's degree in graphic information technology and will complete his master’s degree this December, all while traveling through Europe.

Right now, he is writing his portfolio for graduation and planning a weeklong trip to Iceland.

All of this because he chose to attend the Ira A. Fulton Schools of Engineering.

“I am very thankful for the online program at ASU,” said Guerrero. “It has completely transformed my life.”

Referred to as “not your grandmother's 'Oklahoma!',” the golden age production will soon be retold on a 21st-centrury stage like you’ve never seen it before, premiering Tuesday, Oct. 18, at ASU Gammage.Revamped for a modern day audience, the musical tells the tale of an imperfect America and a community finding itself amid the turbulence of the frontier that shaped the nation years ago.Long ...

Referred to as “not your grandmother's 'Oklahoma!',” the golden age production will soon be retold on a 21st-centrury stage like you’ve never seen it before, premiering Tuesday, Oct. 18, at ASU Gammage.

Revamped for a modern day audience, the musical tells the tale of an imperfect America and a community finding itself amid the turbulence of the frontier that shaped the nation years ago. Long celebrated as an iconic piece of musical theater, “Oklahoma!” unites audiences with the idea of a flawless nation, basking in the illusion of a bright golden haze on the meadow. But viewed anew in the context of a country still struggling with racial, economic and gender equity, sharply divided by political beliefs and emerging from an isolating pandemic and racial reckoning, this production pushes back on the notion of a perfect country — instead suggesting the idea that America is still very much a work in progress.

“What you'll see is just sort of pulling back a deeper layer of some of the social angst I think is present already within the script,” says Sasha Hutchings, who is cast as Laurey Williams. “You just get a deeper focus on those elements of society, which definitely brings a darker tone to the story."

While the revival conveys messages that still prove relevant for audiences today, not a single word has been altered from the original script.

“Sometimes when you get a revival, edits are made or some people try to make things a bit more politically correct,” Hutchings says. “And we have not done that at all. ...It makes the story fuller.”

The production tells the story of a love triangle between farm girl Laurey and her two suitors, the charming cowboy Curly and the mysterious farmhand Jud Fry, as they theatrically expose the show’s darker psychological and societal commentary through their courtship.

“I think in the original version, or at least my experience of it ... it's sort of a foregone conclusion that Laurey and Curly will end up together, and that is definitely not the case within our story, or without and within our approach,” Hutchings said.

For her, Laurey is empowered, and she sees her character in a new light in the show’s spin within a modern context: “There is something about that that she's interested in, and for me, what that does is really highlight the choices that she has.

"A choice which really resonates with me as a woman, you know? In this time, when choices are being taken away and what it means, the autonomy that that gives you.”

To Hutchings, “Oklahoma!” doesn’t shield the audience from an interpretation of their own, and allows viewers to relate the experiences of the characters to their own lives. Not only does Hutchings hope that viewers are “able to see themselves and their loved ones represented,” but also to take that even further and “return to their lives and the people they love with a new lens with which to maybe approach.”

“When they realize that maybe the show is taking a turn they weren't expecting or taking a turn that they find interesting but don't know where it’s headed,” she said, she hopes that viewers “remain open and continue to ask questions.”

Both Broadway fans familiar with the classic production and first-time viewers can expect the unexpected with an unorthodox use of lighting; brightly gleaming in some scenes to unite the audience with performers, and turned off for others to direct the focus to the dialogue on stage. Like the revived production itself, Hutchings hopes that this show can challenge the norm for viewers and the “stagnant way of life” that our individual thinking becomes accustomed to.

“I hope that this show is disruptive to that,” she said.

Overall, Hutchings hopes that theatergoers will find a way to relate to the piece, feel inspired and leave the theater with a sense of curiosity.

Rodgers and Hammerstein’s “Oklahoma!” will be showing at ASU Gammage, Oct. 18–23. For more information, visit asugammage.com.