Arizona State University Principal Lecturer Rosemarie Dombrowski and alumna Amber McCrary have received 2022 Humanities Awards from Arizona Humanities, the state affiliate of the National Endowment for the Humanities, for their outstanding work in the public humanities. 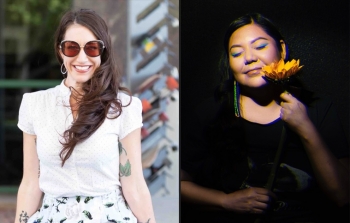 The founding director of Revisionary Arts, a nonprofit that provides therapeutic poetry workshops for vulnerable populations, the medical community and the community at large, Dombrowski has shared the power of poetry in countless public talks with diverse audiences.

Born in Shonto, Arizona, and raised in Flagstaff, Arizona, McCrary is a poet, zinester, multimedia artist and educator. Over the past several years, she has supported Indigenous writers and artists in Arizona through community-based workshops, independent publishing and justice-rooted cultural work.

Dombrowski and McCrary were recently celebrated in a virtual awards ceremony that included recorded remarks from both, as well as a spoken word performance by some of Dombrowski’s Poetry and Medicine course students.

ASU News spoke with Dombrowski about her role as a humanist and why that work is so vitally important.

Question: You have a number of ongoing projects related to public humanities, from First Friday poetry readings to Rinky Dink Press to Revisionary Arts, etc. Is there anything new on the horizon you’re excited about?

Answer: Since January, I had been working with the formerly incarcerated, leading writing workshops through the Maricopa Reentry Center. That work just ended, but I'm on a grant proposal that could take me to Perryville Prison next semester. I would be helping the women there produce poems that are then going to be dramatized as part of a larger theatrical production. So I'm excited about the prospect of working with them. But for the time being, I’m shifting my focus to working with veterans at the Office for Veteran and Military Academic Engagement (OVMAE) at ASU. I'm very excited about my work with veterans. They’re another largely misunderstood population, if not also marginalized and traumatized. It's kind of a culture of masculinity, unfortunately. And so there's not a lot of impetus within that culture to be vulnerable, to share stories of trauma. So to be the person who gets to go into that environment and starts to encourage that level of vulnerability is really exciting for me. I just don't feel quite like myself if I'm not doing poetry therapy every week.

Q: When did you realize this type of work was your calling?

A: When my first book came out years ago, that was when I first started talking about poetry as a therapeutic modality. I was giving lots of talks in the community about that. I was teaching therapeutic classes at Changing Hands for the Osher Lifelong Learning Institute (at Arizona State University). Since then, it’s been kind of a slow gestation. I don’t think I ever thought that I was becoming (a humanist). I just sort of felt like I was taking my community work in a slightly different direction. I would still teach memoir and I would still teach other classes for the community. But I wasn't homed in on the therapeutic stuff until the beginning of the pandemic when I got the fellowship from the Academy of American Poets. I was like, “Oh my God, what am I supposed to do with all this money now?” And then I had a meeting with all the other laureates who had gotten the fellowship, and a couple of women who were sort of in the same wheelhouse as me had said to me, “Put the money in a nonprofit.” I was like, “What does that even mean?” (laughs) So then I started Googling it (laughs), and I started a nonprofit. So that's how I came up with Revisionary Arts.

I brought a couple of people in from the community who I knew were also doing this work and were interested in growing this work and offering poetic therapy to more vulnerable populations. So I just culled together an amazing little team, and we all love the work so passionately because it's what we've all lived. We've all lived lives full of trauma of various kinds, and we were all sort of vulnerable poets telling our stories through poetry, and that's what we're trying to give to other people. We’ve partnered with a domestic violence shelter, we have a partnership with AZ Creative Aging, we have a partnership with Jewish Family & Children’s Service, the Maricopa Reentry Center … we’ve partnered with the Hearing Loss Association … we worked with one-n-ten for a while. We just really believe in the work and I think that's why people respond well to what we're doing, and I think that's why people keep coming back.

Q: What are some of the biggest challenges you face as a public figure for the humanities?

A: I tend not to censor myself. (Censoring myself) is kind of antithetical to what I do as a confessional medical poet and what I do in the community and in the classroom. But sometimes, in this political climate, I feel like that can be a bit a polarizing. And I don't want to be, because I work with people of all backgrounds and political persuasions. So some things, some differences of opinion, I've definitely had to table. But suffering is suffering, and when someone is willing to open themselves up and be vulnerable in one of those spaces that I work in, then I am going to welcome them with open arms and I'm going to guide them through the process. So it certainly has taught me a lot about being human, about forgiveness, about what a healing community really looks like. I don't know that I've ever witnessed anything more profoundly beautiful, life-changing, exhilarating than formerly incarcerated men, struggling with addiction, rebirthing themselves. I don't know that I've ever seen anything more profoundly stunning than that. And so, just to be part of that process, I feel privileged.

Q: What’s your favorite part about your public humanities work?

A: If I don't lead with my story, then I can't get anybody to trust me in 60 minutes. So (leading therapeutic poetry workshops has) been powerful for me. (My own personal story is) not the kind of thing that I would ever lead with in the college classroom. So I think it's been really cathartic for me to function as a therapist in the community, because it gives me an opportunity to not just share my own story in an attempt to be vulnerable and bond with other vulnerable individuals, but it's therapeutic for me. And if I can gift poetry to anybody who's open to it … I mean, it saved my life.

Q: What’s it like to be recognized as an “outstanding speaker”?

A: It’s awesome. I've always said I’m more of a lecturer, more of a teacher. I like poetry readings, but the thing I complain about most to my friends is having to read my poetry. Because I'm always so concerned about keeping the audience engaged. I'm like, “How many minutes of my autism poetry or my medical poetry or my incarceration poetry can they endure?” (Laughs.) Because being entertaining is not my objective as a poet. I'm writing to tell a story that has shaped my life, and there's a lot of ugly parts, and that's not entertainment. But when I lecture, when I teach, even when the subject matter is extremely dense or extremely heartening or traumatic, I feel like there's a different kind of dynamism that I bring to the presentation of that material. And I love it. Running a nonprofit and lecturing for Arizona Humanities and other similar organizations feels really good to me.

Q: Do you have any advice for those looking to get into public humanities work?

A: You have to get real with yourself. You can’t be a humanist if you can't show your humanness. You have to be very comfortable with your vulnerabilities. For me, working in the humanities is the daily act of becoming more human. And it's not always easy and it's not always pretty and it's very emotional. I feel like humanists are like the bridge or the connective tissue between so many disciplines, but we haven't been acknowledged as that and we've been afraid to move into those spaces because there’s been resistance. You know, when you're walking into a room full of cardiologists, they’re probably going to be like, “Who's the crazy lady with the tattoos and the poetry?” (Laughs.) But I love working in the sciences and I love working in medicine because I'm realizing how important (humanities’) role is within those sort of services. I think humanities is big picture work; it’s about bringing together people from different disciplines, from different backgrounds, with different struggles in a meaningful way that helps them find new solutions. And it's really exciting to be a part of that.

Over a dozen Sun Devil Lacrosse alumni suited up for the annual "Alumni Game" taking on the current Sun Devil roster in friendly matchup. ... Over a dozen Sun Devil Lacrosse alumni suited up for the annual "Alumni Game" taking on the current Sun Devil roster in friendly matchup.