Tucked within the Caribbean Sea, the Mesoamerican Reef, the world’s second-largest coral reef tract, stretches more than 1,000 miles across the coastlines of Mexico, Belize, Guatemala and Honduras.

Belizean reefs constitute a major portion of the Mesoamerican Reef, an important tourist destination and source of food and livelihood for adjacent coastal communities, but a lack of baseline data on the long-term impacts of historical fishing on this ecosystem threaten its preservation. 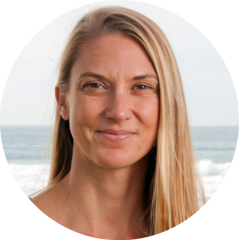 A new study led by Katie Cramer, associate research professor in Arizona State University’s Center for Biodiversity Outcomes, and Wendy T. Muraoka of Dalhousie University provides new insights into the long-standing local human impacts on Belizean coral reefs and how these stressors have made this precious biodiversity resource more vulnerable to climate change.

The research published in Frontiers in Ecology and Evolution found that the abundance of parrotfish, herbivorous fish that keep algae in check on reefs and allow corals to dominate, began declining as European colonization expanded in the Mesoamerican Reef region and fishing on Belizean reefs intensified.

These declines occurred during a time of low human population density compared to the height of Maya civilization, suggesting that smaller human populations can exhaust reef resources in a relatively short amount of time when fishing levels are high.

Additionally, this research showed that higher parrotfish abundances cause faster reef growth rates and that the historical declines in parrotfish have resulted in a slowdown in reef growth in Belize. This makes these reefs more vulnerable to accelerating sea level rise from climate change.

To assess the long-term coupling of reef ecosystem and human dynamics in this region, the researchers tracked trends in the structure and functioning of lagoonal reefs within the Belizean portion of the Mesoamerican Reef using fish teeth fossils and sediment accumulation rates within reef sediment cores.

The team then paired this with a timeline of demographic and cultural changes in this region’s human populations. The roughly 1,300-year timeline encompassed in the core record shows that declines in the relative abundance and accumulation rate of teeth from parrotfish, a key reef herbivore, occurred at all three reef sites and began sometime between 1,500-1,800 A.D., depending on site and metric of abundance.

“This study shows that parrotfish abundance and reef growth on Belizean reefs began declining centuries prior to the first underwater surveys in the 1970s and 1980s, likely from historical and modern overfishing,” said Cramer, who is a senior global futures scientist in ASU’s Julie Ann Wrigley Global Futures Laboratory. “The long time series of reef change from the core record provides a more accurate ecological baseline from which to assess ecosystem health and to set recovery targets for parrotfish, and shows that using the 1970s as a recovery benchmark is too low of a bar.

“Long-standing local human impacts like fishing and land clearing have been impacting Caribbean reefs for centuries and have weakened coral reef resilience to climate change impacts. We, therefore, need to better manage these stressors to allow these reefs to better weather the climate crisis.”

Have a Day, Bourguet: Backup QB Leads ASU to Upset Over No. 21/24 Washington

Backup quarterback Trenton Bourguet answered the call when his name was called, throwing for 182 yards and three touchdowns in the Sun Devils' 45-38 win over No. 21/24 Washington. ...

Have a Day, Bourguet: Backup QB Leads ASU to Upset Over No. 21/24 Washington Backup quarterback Trenton Bourguet answered the call when his name was called, throwing for 182 yards and three touchdowns in the Sun Devils' 45-38 win over No. 21/24 Washington.