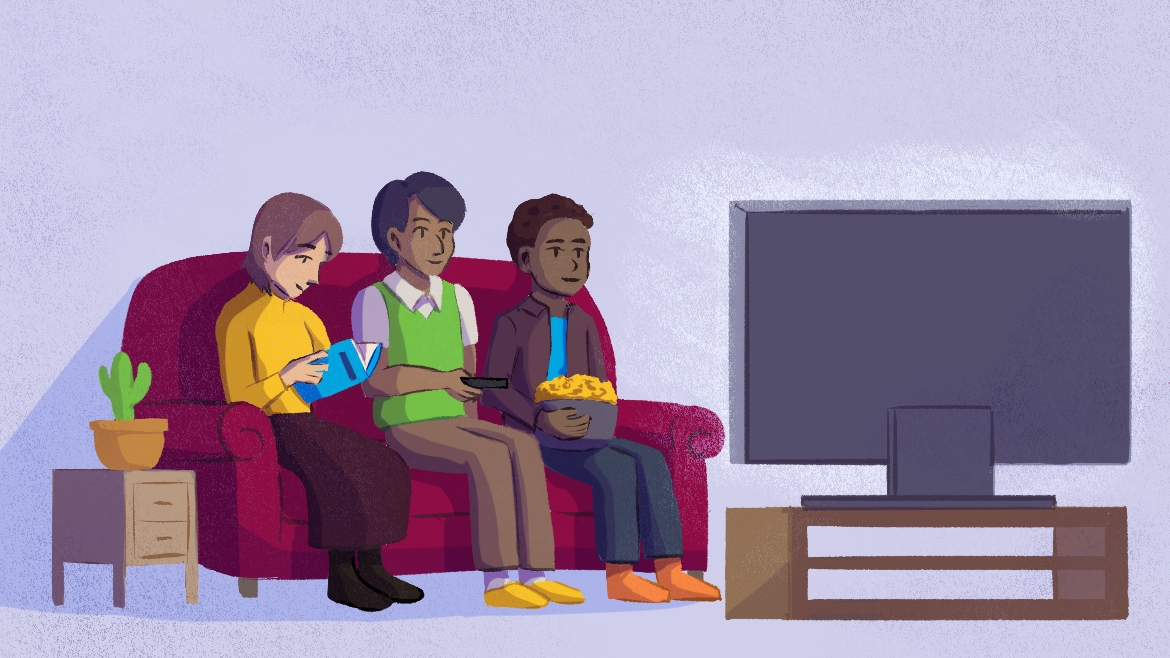 In a battle for content, streamers like Amazon Prime, Hulu and Disney+ are relying more than ever on books and graphic novels for compelling stories to attract subscribers. While a passionate pre-existing fan base may ensure more viewers, it can also create impossible expectations.

And in the age of social media, producers are often wary of tampering too much with beloved source material, lest the Twitterverse destroy its chances before it even gets through opening weekend.

One example of this is the new adaptation of Jane Austen’s “Persuasion” on Netflix, which experimented with breaking the fourth wall, an approach where the lead speaks directly to camera — in this case, complete with a tinge of snark. It did not go over well with audiences.

Morrissey said Netflix’s “Persuasion” adaptation was likely torn apart because it did not meet the expectations of an audience that already had “strong ties to the source material and strong feelings about what the adaptation should look like, what the narrative should be, which scenes are preserved.”

“Netflix was probably trying to woo female audiences with the material, and it backfired,” she said.

Morrissey also studies the impacts of digitization on creative communities, looking in particular at the norms of how movies and shows are released, how the masses react and how women are perceived in romantic contexts.

She shared her thoughts on the recent wave of movie and show adaptations, as well as the effect of social media and other factors on the phenomenon. Question: Why do you think “Persuasion” and other adaptations like it have been poorly received?

Answer: Because social media and fan networks are so prominent today, you see how it shapes people’s responses. So if you get enough people framing an adaptation in a particular way, it’s going to color the way anyone goes into it. With ‘Persuasion’ there was so much hate launched, just from the trailer, that I don’t think anyone was going to like that film. There’s a point where the tide turns.

Q: Aside from financial motivations, what else can influence how a story is adapted to film?

A: Whether … a streaming service (is) specifically interested in a certain niche of subscribers, or if it's a big franchise film, (producers are) looking for a particular reach, and all of those different contexts really shape how they adapt the film.

Q: What’s a good example of an adaptation done well?

A: An older example that went in a better direction (than “Persuasion”) is Peter Jackson’s adaptation of “Lord of the Rings.” They were so careful throughout the process to constantly reassure the fans that this franchise was in good hands, and that it was being honored appropriately. And that helped them manage the pushback, and fans really embraced the adaptation.

Q: “Sandman,” the beloved graphic novel by Neil Gaiman, was nervously premiered on Netflix earlier this year, and though blessed by the author, fans of the novel were excited but extremely concerned about the adaptation. As a fan yourself, what are your thoughts on it?

A: I had been terrified to watch the adaptation. I think it turned out fine, but honestly I’m never going to love it because of how emotionally attached I am to the graphic novel.

Q: Is there any clear data to support the feeling that there are way more adaptations happening right now?

A: It may just seem like it since the streamers are in such fierce competition, and adapting something that has already proven to be popular seems less financially risky.

Q: You’re working on a book, “Redefining Romance: Love & Desire in Today's Digital Culture,” as part of your appointment as an Institute for Humanities Research Fellow. Tell us about that.

A: In an analog era, romance genres helped stabilize a hierarchy of sexual norms for women and privileged a particular type of white, heteronormative femininity. In the 21st century, digital platforms use algorithms to manage a range of competing sexual hierarchies. Across media, romance genres have been reshaped by shifts in technology, emerging digital markets and a more participatory media culture.

(I’m interested in looking at) how do we start to make sense of the current media landscape, where we have all these different avenues for watching media, where there isn't one unified place where everyone is watching the same stuff at the same time? And so how do we start to think about how norms circulate, how norms change over time? I'm interested in representations of female desire across media. And I'm looking at romance media in this broad way, because we often tend to think of one thing when we think of romance, such as romantic comedy or romance novels. The reality is that romance media is way more complicated and more diverse than those particular little silos.

Listen to Morrissey talk on the subject below:

Communications Specialist , The College of Liberal Arts and Sciences

Editor's note: This story is part of our coverage of a weeklong series of events to mark ASU's expansion in California at the ASU California Center in downtown Los Angeles.When Arizona State University decided to name its film school after Sidney Poitier, it was a perfect fit because the legendary actor was outspoken about the need for representation in Hollywood, and that is the mission o... 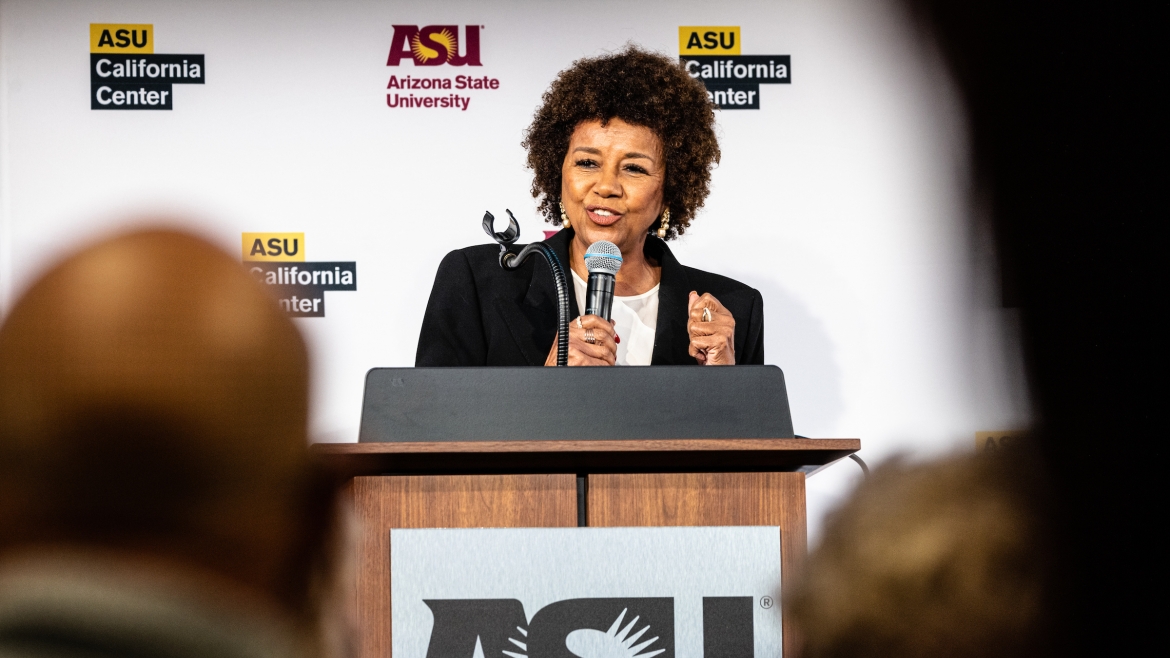 When Arizona State University decided to name its film school after Sidney Poitier, it was a perfect fit because the legendary actor was outspoken about the need for representation in Hollywood, and that is the mission of the The Sidney Poitier New American Film School.

“We are supporting filmmakers in front of and behind the camera,” said Cheryl Boone Isaacs, founding director of the school. She spoke at an event Thursday titled “The Future of Film Education” at the ASU California Center in downtown Los Angeles.

Boone Isaacs showed an interview clip from the Apple TV documentary “Poitier,” in which he says, “If there were equal opportunity in this business, there would be 15 Sidney Poitiers and 10 or 12 Harry Belafontes. But there is not.”

“That is the reason we are here,” said Boone Isaacs, a past president of the Academy of Motion Picture Arts and Sciences.

“You go to the movies and at the end of the two hours, and these days sometimes three hours, you’re sitting through at least 10 minutes of names and positions that support the story. We are all about supporting the story,” she said.

“Our goal at the Poitier Film School is to create as much opportunity for our students to participate in every single facet of the entertainment business, whether around production or the team that supports production, which is a vast field.”

Peter Murrieta, deputy director of the school, has decades of experience in television as a writer and showrunner. He said that in 2002, his show “Greetings from Tucson” was on the air, along with a few other shows that also featured Latinos.

“There was a real feeling of, ‘This is about to happen. We’ve been waiting,’” he said of the Latino representation.

“And then all those shows went away and that was it for awhile. And then another wave happened and went away.”

So he realized there had to be another way, and joined the faculty at ASU in 2018.

“It’s this idea that we’re not going to be able to take over Hollywood in this other way, (so) I’ll create an army to keep coming,” he said.

Murrieta will be involved in a new program for California community college students who can transfer to the film program at the ASU California Center to earn a bachelor’s degree. Herberger Institute for Design and the Arts Dean Steven Tepper talks about the creation of The Sidney Poitier New American Film School during the “Future of Film Education” session at the ASU California Center on Oct. 6. 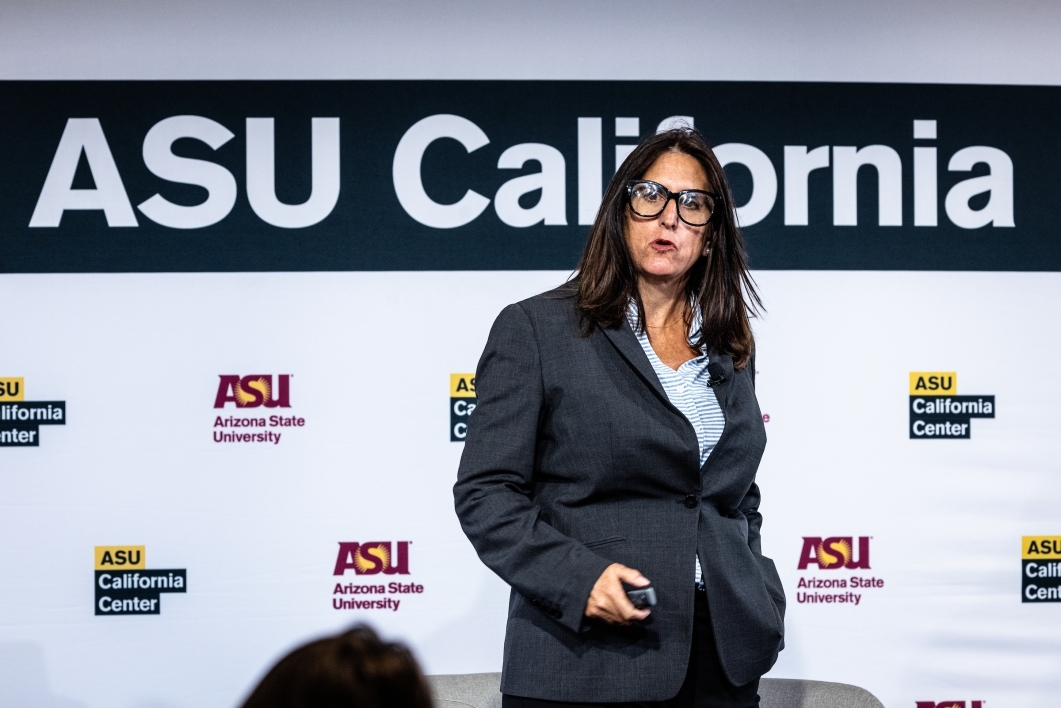 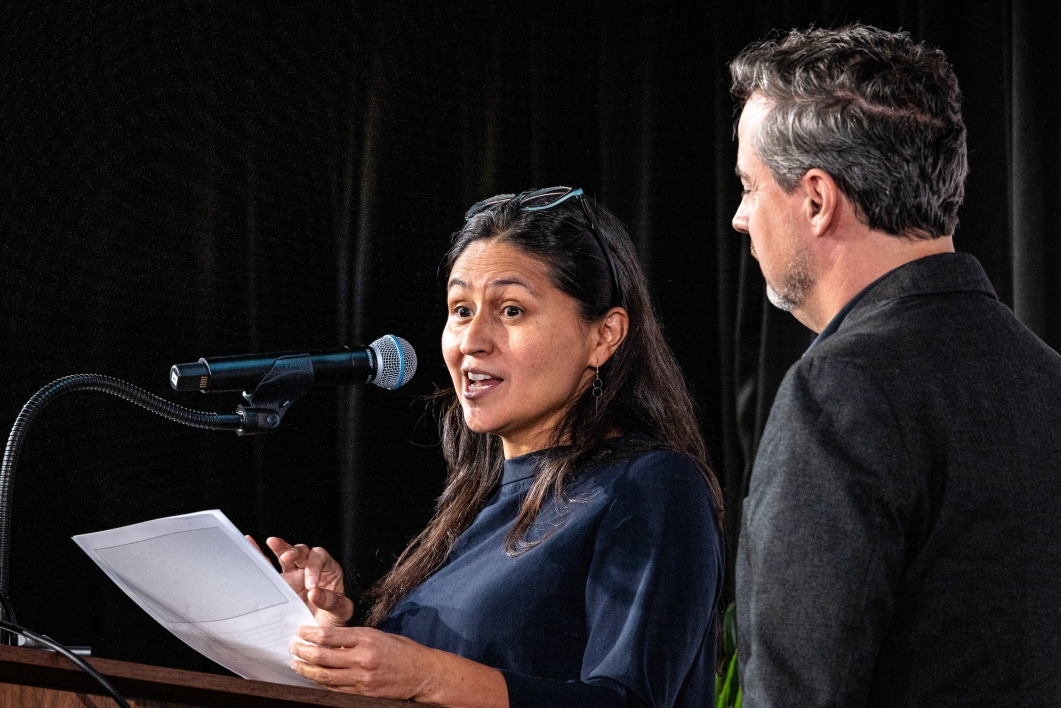 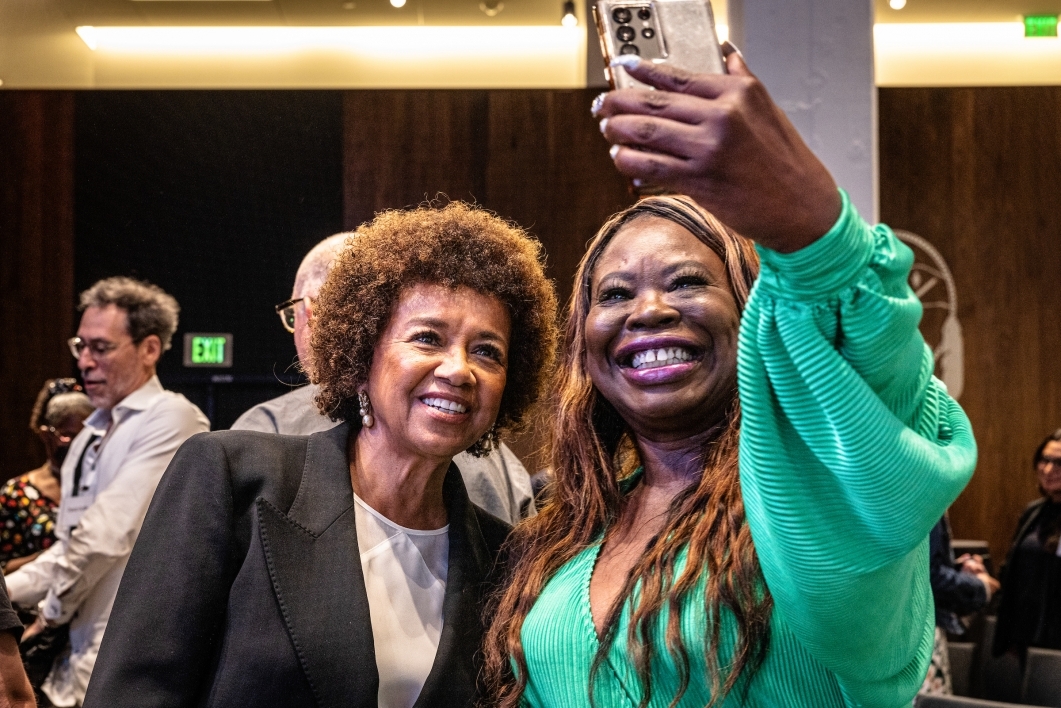 Cheryl Boone Isaacs, director and professor of practice in The Sidney Poitier New American Film School, poses for a selfie with Atlanta filmmaker Zina Brown after the "Future of Film Education" session.

While the Latino population of the nation is 20%, and 30% in Arizona, Latinos make up less than 5% of TV directors and showrunners as well as film directors, Ibarra said.

“It’s an urgent issue of workforce equity and representation,” Rivera said. “I see it as a cultural emergency.”

The lab will work with mid-career interdependent filmmakers to produce new works and connect with students.

Nonny de la Peña described the Narrative and Emerging Media Program, a joint undertaking by The Sidney Poitier New American Film School and the Walter Cronkite School of Journalism and Mass Communication. She is the founder and CEO of Emblematic Group, a digital media company focused on immersive virtual, mixed and augmented reality.

De la Peña, the founding director of the program, showed clips of some of her groundbreaking immersive journalism, including a piece she did for “Frontline” about life in a solitary confinement cell.

“You are in that room. It puts people on the scene and in real stories,” she said.

Students in the program are taught virtual production using game engine technology to make three-dimensional environments, which they then merge with film and audio of real actors.

“The facilities here are so good that we have our own virtual production studio,” she said.

Steven Tepper, dean of the Herberger Institute for Design and the Arts, said that when ASU was considering naming the film school, he approached the Poitier family, telling them that ASU’s law school is named for Sandra Day O’Connor and ASU's journalism school is named for Walter Cronkite.

“Those are three people who embody dignity, statesmanship and excellence at the highest levels.”

Top photo: Cheryl Boone Isaacs, director and professor of practice at The Sidney Poitier New American Film School talks about her career and what lead her to ASU, on Thursday, Oct, 6, at the ASU California Center in downtown Los Angeles. Photo by Charlie Leight/ASU News