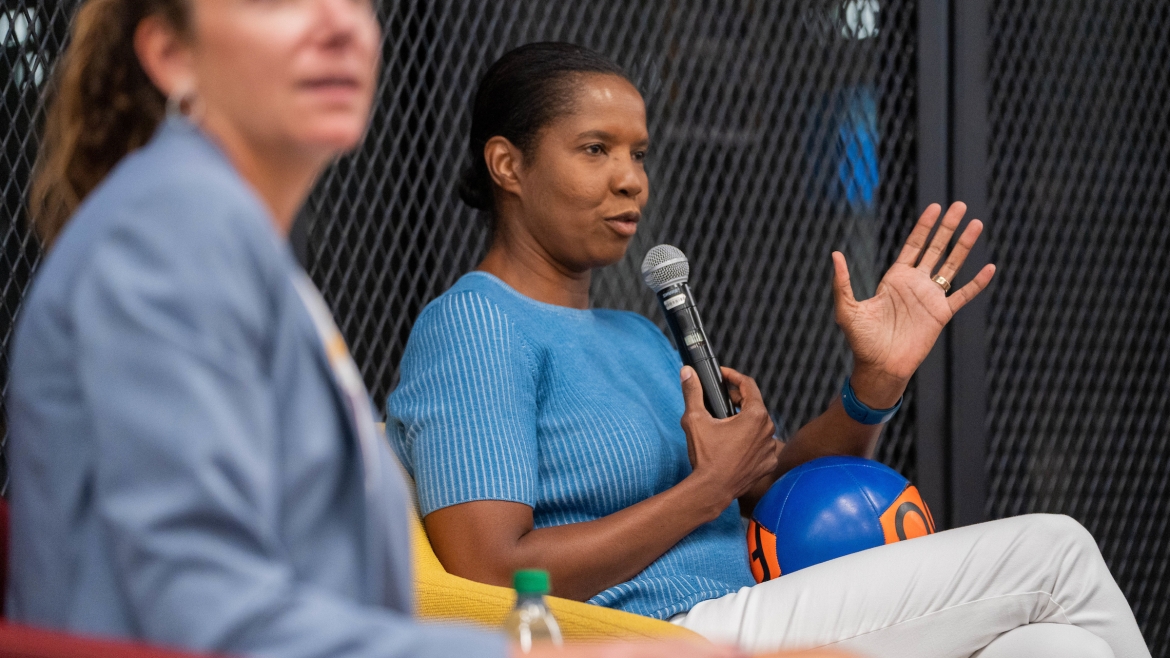 Panelists noted how Title IX, which is celebrating its 50th anniversary, paved the way for players like Scurry

Briana Scurry pulled out her gold medals from the 1996 Olympics and 1999 World Cup.

The "girls," she called them.

“Can I trust you?” she asked the audience at the "Title IX and Global Football" panel put on Tuesday by Arizona State University’s Global Sport Institute and the new Sport Humanities initiative in The College of Liberal Arts and Sciences.

As heads nodded, Scurry handed the gold medals to spectators in the first row and said to pass them around.

“They’ve never been dropped,” Scurry said. “So be careful.”

The medals represent the pinnacle of sport and Scurry’s career as goalkeeper for the United States’ Olympic soccer and World Cup teams. But Scurry said they also represent the progress women’s sports — and, in particular, soccer — have made thanks to those teams and Title IX, which is celebrating its 50th anniversary this year.

“Title IX was obviously a gateway for me,” Scurry said. “Without Title IX, I’m not here talking to you because Title IX was the legislation that started everything. … It was the best ally I could have ever possibly gotten.”

Tuesday’s event, which was moderated by Victoria Jackson, a sports historian in ASU’s School of Historical, Philosophical and Religious Studies, had two halves, so to speak.

For the first 90 minutes or so, attendees watched part of Scurry’s documentary, titled “The Only,” and heard Scurry talk about her time on the Olympic and World Cup teams. The second half featured questions from the audience and a six-person panel that included ASU soccer players Alexia Delgado and Nicole Douglas, and Lindsey Mean, an associate professor in ASU’s School of Social and Behavioral Sciences. 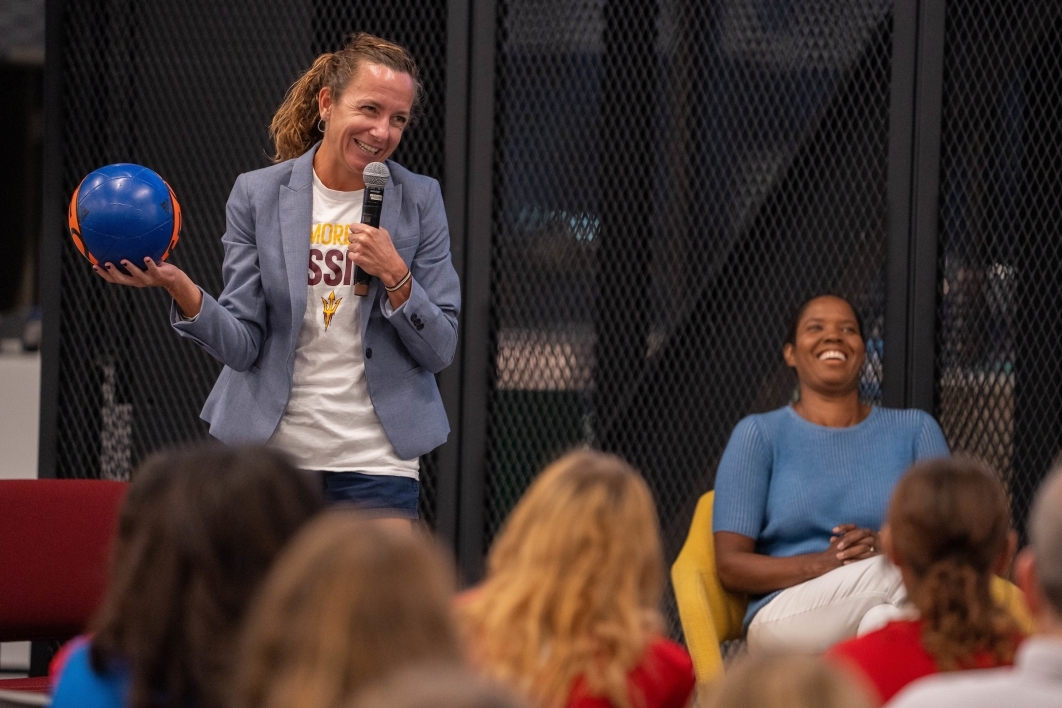 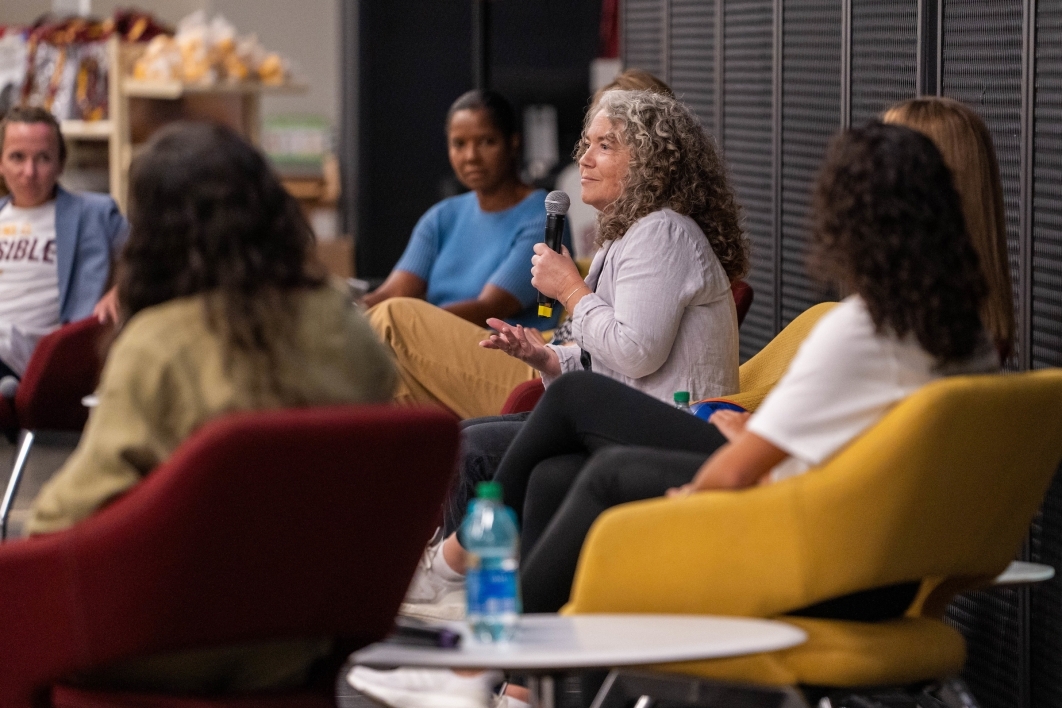 Sara Alvarado (left) looks at one of Briana Scurry’s Olympic gold medals from the games in Atlanta in 1996 with her daughter, Viviana. 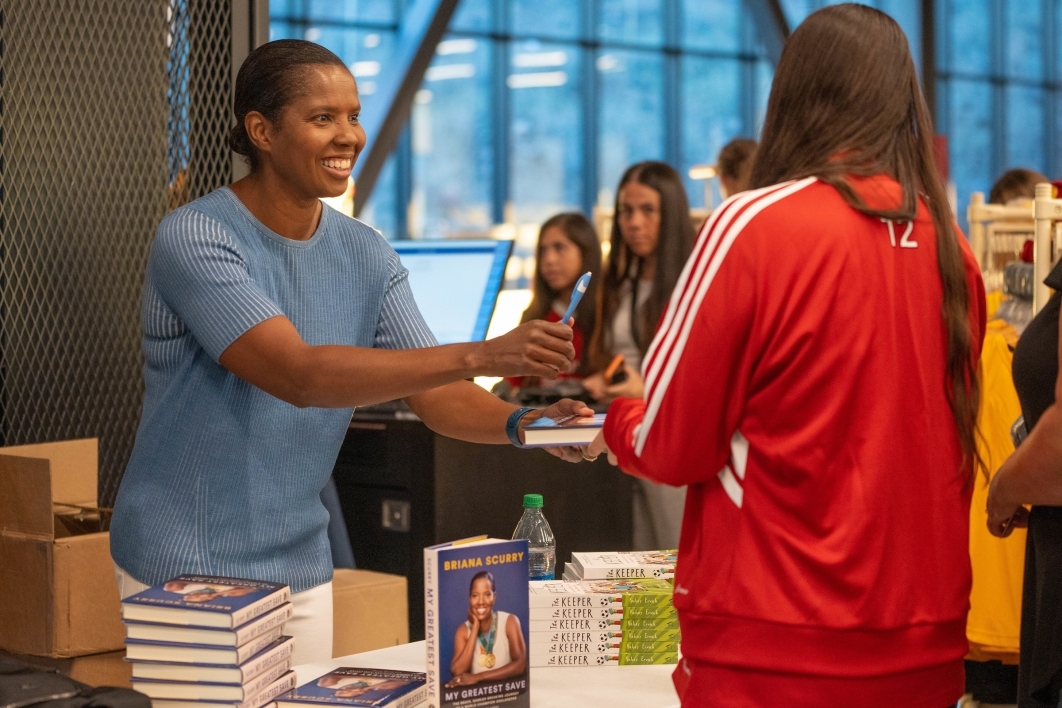 Any soccer fan of a certain age remembers Scurry's time on those U.S. soccer teams, which included Mia Hamm, Abby Wambach and Brandi Chastain, who famously ripped her jersey off after making the game-winning penalty kick in the 1999 World Cup final against China.

In addition to proving that women’s soccer could fill NFL stadiums across the country (the World Cup final was played before more than 90,000 fans at the Rose Bowl in Pasadena), Scurry and her teammates initiated the long fight for the U.S. women’s national team to receive equal pay with the men’s national team, a fight that was finally won in May of this year.

“I’m very excited about the equal pay collective bargaining agreement,” Scurry said. “Somebody came up to me and said, ‘Why are you so excited? Only 30 to 40 people are affected by this.’ No. This is a watershed moment. Now, every other federation in every country, and not just for soccer, can look at this and say, ‘We can do something like this.’

“I’m very, very proud to have been a part of that; to be a on a team whose legacy created that."

The documentary, which can be viewed on Paramount+, sprung from Scurry’s book “My Greatest Save.” In the book and movie, Scurry addressed the discrimination she experienced because she was a Black lesbian and the dark turn her life took — including thoughts of suicide — when a concussion she suffered in April 2010 forced her to retire and live for 3 1/2 years with memory loss, insomnia, poor balance and chronic pain.

Scurry said the book and documentary were cathartic.

“But I felt like I had to go in those rooms to be completely honest, to be able to impact everyone who reads the book and watches the documentary.”

Scurry said she never felt discrimination from her coaches and teammates on the women’s national team. But she believes the media — and some sports companies — viewed her differently because of her race and sexuality.

“What I realized after the fact was the media had problems with the way I looked and the fact that I was gay,” Scurry said. “That was a bit of an eye opener and something I had to reconcile and realize because I always felt my color was never going to be anything that held me back.”

Scurry also told the audience, which included girls youth soccer teams from around the Valley, about how hard her life became after suffering her concussion.

“It completely changed my life,” she said. “... I became depressed, I had anxiety and I was suicidal in 2013. I talk (in the documentary) about standing on the edge of a waterfall thinking of going over, and I can’t swim. I knew I wouldn’t survive it if I did, and what kept me from doing it was the thought of my mother being told her daughter was gone.”

A medical procedure eventually relieved Scurry’s pain, and she said the experience was a lesson in resilience.

“Hopefully, people can realize that even professional athletes, all of us as human beings, have ups and downs, but you have to persevere through it, even if it gets really difficult or you’re hanging on by a thread,” Scurry said. “Just keep hanging in there because someone is probably coming to help.”

When the panel convened, Paola Lopez Yrigoyen, a former player for several teams in Mexico, said she appreciates the impact Scurry and her teammates had in showing young women they can be equals, both on and off the field. In Mexico, she said, that’s not the case.

More than a dozen teams were fined in September 2021 for colluding to impose a cap on the salaries of female soccer players, and despite the fact Mexico hosted the women’s World Cup in 1971 and went to the finals, a women’s professional league wasn’t established until 2017.

“It’s a shame we didn’t get to clap for our heroes,” she said. “How can you do that when Title IX in Mexico is non-existent?”

Douglas, ASU’s all-time leading goal scorer, said she encountered a different type of resistance when she started playing soccer at the age of 4 in London.

“I started playing on my twin brother’s team,” Douglas said. “I played with him for two years, and I’d get remarks from parents on the other team and from boys on the other team saying, ‘Why is this girl on this team? Why is she playing? She can’t play soccer.’

"My twin brother supported me and said girls can do this, too. That made a major difference in my life.”

Scurry said hearing the stories from Lopez Yrigoyen, Douglas and Delgado, who also grew up playing in Mexico, made her appreciate once again the significance of the Title IX legislation.

“I spend so much time supporting women’s soccer in the United States that I don’t hear how it is in Mexico or England. So thank you for that,” Scurry said. “It was very eye opening. It makes me feel even more fortunate and blessed that we do have Title IX here. It really has made such an amazing impact.”

Fourth-year PhD student Julianne Windham was recently awarded the annual Stephen G. Walker Graduate Support Fellowship from the School of Politics and Global Studies at Arizona State University for the 2022–23 school year, for her research into international relations.The fund for the award was established by former School of Politics and Global Studies students in honor of Emeritus Professor St...

Fourth-year PhD student Julianne Windham was recently awarded the annual Stephen G. Walker Graduate Support Fellowship from the School of Politics and Global Studies at Arizona State University for the 2022–23 school year, for her research into international relations.

The fund for the award was established by former School of Politics and Global Studies students in honor of Emeritus Professor Stephen Walker, who was a faculty member in the political science department from 1969 until his retirement in 2003. It is intended to support students studying international relations and foreign policy in particular. 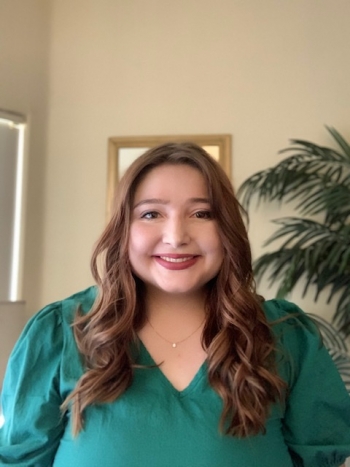 “Julianne is an excellent researcher and thinker,” said Windham’s advisor, Thorin Wright, associate professor and associate director of graduate studies in the School of Politics and Global Studies.

“Her dissertation project examines the harassment and restrictions that states place on civil society organizations. Civil society organizations have long shown to be key actors in promoting healthy democracies, so understanding how states restrict them is a key piece of the puzzle of understanding human rights and democracy. Her project employs methods like text analysis and machine learning to build new data for her project, which will be of service not only for her study but for the field as a whole.”

Windham holds a bachelor’s degree in political science and a master’s degree in comparative politics, both from Oklahoma State University.

“I would like to thank those that donated to the School of Politics and Global Studies and to the Stephen G. Walker (Graduate) Support Fellowship directly,” Windham said. “Without their support, fellowships like this would not be possible. I would also like to thank my advisor, Dr. Thorin Wright, and Dr. Luke Perez for their mentorship.”

Windham shared with ASU News more about her recent research and the impact of the Stephen G. Walker Graduate Support Fellowship:

Question: What is the current research project you are working on?

Answer: I am currently working on my dissertation project, which focuses on civil society repression and human rights. Civil society groups play a role in the enforcement and protection of human rights. I am currently utilizing machine learning methods to collect data that allows me to look at the relationship of identity and access to civil society. I focus specifically on the experiences of women and racial/ethnic minorities. My third chapter argues that country leaders may be strategically choosing modes of repression on civil society that are not recorded in public records as a means to conceal the extent to which they are impeding access to civil society. The Stephen G. Walker Graduate Support Fellowship will be a great help to me as I work to complete this ambitious project.

Q: What does it mean to you to be chosen for this award?

A: The past recipients of the Stephen G. Walker (Graduate) Support Fellowship have all been colleagues that I admire, with very impressive research. I felt very humbled and honored to also be selected for this award named after an inspiring scholar. I consider this a form of encouragement towards my research. I am now more confident and more enabled to continue my pursuits of a career in academia.