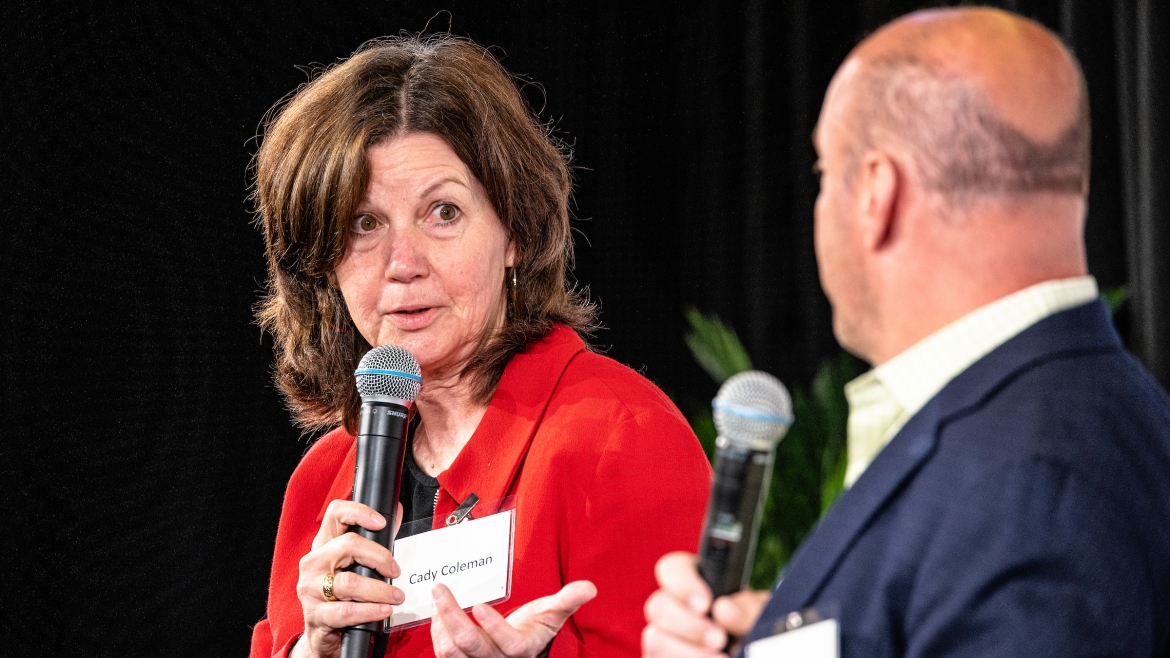 Former astronaut Cady Coleman spoke as part of a session on 'Space Exploration, Commerce and Stewardship'

“We’re not going to be successful if we only have people who look and think alike,” said Coleman, ASU global explorer-in-residence, who gave welcome remarks during the "Space Exploration, Commerce and Stewardship" event that took place at the ASU California Center on Oct. 6.

She’s been working with a group that is seeking to make space accessible to people with disabilities.

“It was eye opening to realize that I’ve been leaving a slew of the population out of my thoughts and ideas,” she said.

Coleman noted that the most recent group of people traveling to the International Space Station, who launched on Wednesday, includes two Americans, a Japanese man and a Russian woman.

“Some people think, especially in these times, how can we do that? But that is exactly what space exploration is about,” she said.

“Part of the reason we’re going back to the moon is that it’s not just one country. The way we behaved down here on Earth in terms of resources and countries not getting along and doing things that are not tolerable will repeat itself on the moon if we don’t figure out how to do it.”

“I want that Star Trek future where we can put our differences behind us and all get along, but you can’t ignore what happens on the ground,” he said.

“It’s incongruous to see us hugging each other in space when there are atrocities being committed on the ground.”

Our future in space 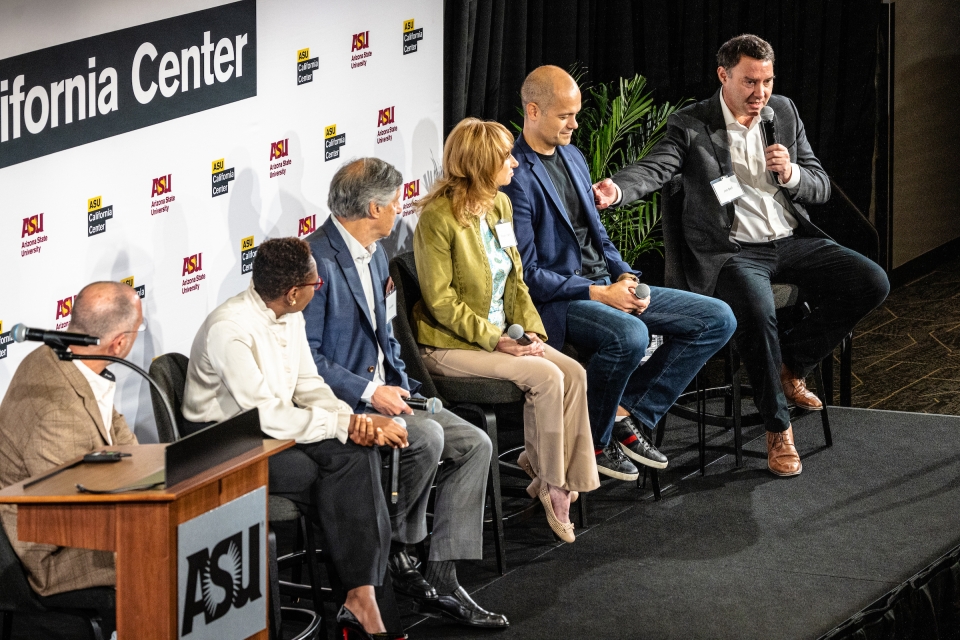 Coleman's remarks were followed by a panel discussion on industry outlooks for our future in space.

Space exploration is much different than when the U.S. and the Soviet Union were racing to the moon in the 1960s, according to the panel of experts who spoke Thursday.

“Returning to the moon is not to repeat the ‘flags and footprint’ mission of Apollo,” said Greg Autry, clinical professor of space leadership, policy and business in the Thunderbird School of Global Management and an affiliate professor with the Interplanetary Initiative.

The nature of the public-private partnerships and the increase in commercial space travel has changed the industry, according to Jim Bell, professor in the School of Earth and Space Exploration and director of the Space Technology and Science (NewSpace) Initiative.

“Our traditional aerospace partners are still there and still involved,” such as Lockheed Martin, he said. “But the new landscape is chock full of entrepreneurial, disruptive small companies that have great ambition and are being seeded with funding by the government.”

Josh Brost, who has a degree in aerospace engineering from ASU, is vice president of business development at Relativity Space, a company that is using 3D printing to create rocket parts.

But 3D printing changes that.

“In the public-private partnerships of today, what you’re seeing is no longer putting the financial reward and the financial risk onto one entity,” Brost said.

The new space industry needs all kinds of people to thrive. Timi Aganaba, professor of space and society in the School for the Future of Innovation in Society, is a space lawyer.

“I work with students and companies and all kinds of people talking about the stakeholders. Who are we talking about when we say we need to open up space to everyone? Who has access to financing? Who are the minority stakeholders?

“When it comes to stewardship, space is very individualistic,” she said.

“We’re starting to try to have common understanding, but we’re not there yet.”

Genetic research has captured the public’s attention in recent years as scientists have made important discoveries resulting in promising treatments for a variety of diseases and conditions.All of that groundbreaking research has led to a need for more genetic counselors to help patients understand their risk of a variety of genetic conditions and help alleviate some of the stress in making trea...

Genetic research has captured the public’s attention in recent years as scientists have made important discoveries resulting in promising treatments for a variety of diseases and conditions.

All of that groundbreaking research has led to a need for more genetic counselors to help patients understand their risk of a variety of genetic conditions and help alleviate some of the stress in making treatment decisions. 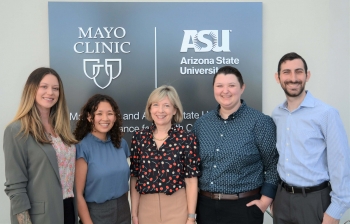 The new Master of Science in genetic counseling degree from the College of Health Solutions at Arizona State University will fill this shortfall and important need.

Developed in collaboration with Mayo Clinic and accredited by the Accreditation Council for Genetic Counseling, the master’s degree in genetic counseling started this August with its first cohort of students. The full-time, two-year program is based in the College of Health Solutions with classes taking place at the Health Futures Center in north Phoenix.

The need for genetic counseling is expected to increase

Those pioneering students, and the ones who follow, will be prepared to step into a growing field.

“Genetics is a hot topic right now in general,” Hunt Brendish said. “Everyone is interested in genetics and genomics. And for students, I think the field is attractive because it’s a two-year master’s degree, and after graduation, there are a plethora of jobs.”

According to the U.S. Bureau of Labor Statistics, the field of genetic counselors is projected to grow by 18% from 2021 to 2031, much faster than the average for all occupations, with about 300 openings per year.

Genetic counselors need expertise in both the science of genetics and counseling. In addition to helping patients understand and interpret risks and diagnosis, they collect information about family histories, order tests, educate about genetic disorders and serve as an advocate for patients and families.

“We’d like to have people who are very well rounded,” Hunt Brendish said. “Not just a high grade point average, but people who have experience in advocacy for communities, experience talking to people about genetics or volunteering in a field where you’re talking with people who are affected with a disorder or condition. We’re looking for candidates who have researched the field, have the background in science and understand what the job entails.”

In addition to the classroom time, the students will complete a rigorous schedule of clinical experience under the supervision of professionals working in the field. That’s part of the reason why the current class, four students, is so small.

Hunt Brendish said there are only about 50 accredited programs in the country, with each accepting between four to eight students per year. She said those students rely on a pool of about 5,000 professionals for their training.

“Right now, our accrediting body requires that the training be one-one-one with a genetic counselor in a clinic,” Hunt Brendish said. “So I’m asking the community genetic counselors to use some of their clinic time to train our students, and it’s very tricky. It’s chicken and egg, because we don’t have many genetic counselors in the city to train more students.”

For the students, the small class size has helped them forge a bond with each other and the faculty.

“I’m looking forward to the clinical rotations and going to the different conferences,” student Alyssa Rosetta said. “Overall, it’s been good. Everyone has been pretty accepting. It’s like a little family.”