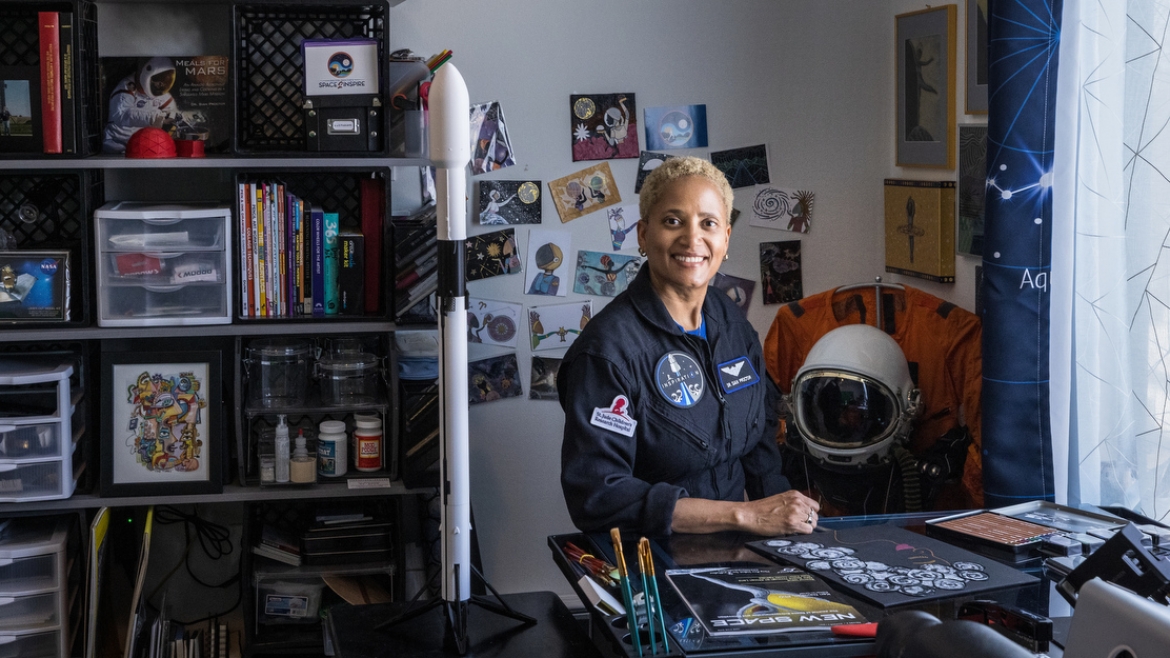 As artist- and explorer-in-residence, Sian Proctor shares her out-of-this-world experience with the ASU community

In 2021, at age 51, Sian Proctor became the first Black woman to pilot a spacecraft when she served on Inspiration4, a mission that marked several historic milestones for human space exploration.

Proctor was a member of the first all-civilian spaceflight to orbit Earth, flying farther than any human since the final Hubble mission in 2009.

The Crew Dragon capsule circumnavigated the Earth 47 times at the unfathomable speed of 17,500 miles per hour and at an altitude of 367 miles, higher than the International Space Station and Hubble Space Telescope.

Today, Proctor’s feet are on the ground, but her impact is sky-high as an artist- and explorer-in-residence at Arizona State University, jointly supported by The College of Liberal Arts and Sciences, the Center for Science and the Imagination, the Interplanetary Initiative and the School of Earth and Space Exploration.

In her new role, she will be working with the Interplanetary Initiative on a project called “JEDI Space,” a term she created and used in a poem to describe why we need a just, equitable, diverse and inclusive space for all of humanity.

That poem won her a seat to space as an artist and poet on the Inspiration4 mission. And now, Proctor has been awarded an XRts Immersive Media Fellowship with the ASU Herberger Institute for Design and the Arts. While at ASU, she will work on artistic projects as well as student and public engagement activities.

Proctor is also an ASU alumna, who earned an MS in geology and PhD in science education at ASU from 1994 to 2006.

Here, she discusses how she overcame great odds to fulfill her childhood dream to become an astronaut and reveals how the future of human spaceflight is more inclusive than ever before and how we can all overcome self-doubt to achieve goals that are literally out of this world.

Q: You piloted a SpaceX rocket on the first all-civilian spaceflight in history. How do you hope to inspire members of the ASU community who aren’t astronauts but share your fascination with space exploration?

A: I hope that my story can inspire students, faculty and staff to not put limits on themselves, to continue to believe and be determined, and have hope for those childhood dreams they once had. Often, life causes changes in your trajectory, but that doesn't mean you can't still achieve those things that you've wanted your entire life. I'm an excellent example of that. I didn’t make it to space until I was in my 50s, so there’s still plenty of time.

Q: How can we bring about a JEDI (just, equitable, diverse and inclusive) space for humanity?

A: Human spaceflight is opening up quicker than we ever could imagine. Commercial spaceflight is a new opportunity to bring everyone along. We're writing that narrative of human space flight right now. Whoever thinks they can't be a part of it, I'm here to tell you that you can be a part of it. In one year, commercial spaceflight sent the oldest male (actor William Shatner at age 90), the oldest female (Wally Funk, the first female flight instructor at a military base, at age 82), the youngest person (Oliver Daemen, an 18-year-old space tourist in a Blue Origin spacecraft) and me to space. That’s amazing.

Q: Who was your earliest role model who made you believe you could become an astronaut?

A: I was born in Guam, where my father worked as a Sperry UNIVAC engineer at the Guam Remote Ground Terminal, NASA’s tracking station, during the Apollo era. After Apollo 11, Neil Armstrong and other astronauts did a tour of the Guam tracking station, and my father got Neil Armstrong's personalized autograph, thanking him for all his help during the missions. I grew up with that and other NASA memorabilia at home on my dad's office wall.

Even though he was in space exploration for a limited period of time, it had a lasting impact on me. Both of my parents encouraged me, particularly my dad, that I could go off and do anything, regardless of race, gender or socioeconomic background. I think that’s one of the reasons I've been able to achieve so much. Q: What was a setback in your career and how did you overcome it?

A: I was 38 when someone said, “Hey, NASA is looking for astronauts.” I went through the astronaut selection process and competed against more than 3,500 applicants in 2009. I was chosen as one of the top 47 finalists but was not one of the nine astronaut candidates selected that year. I didn’t give up on my dreams. Instead, I became an analog astronaut and contributed to the advancement of human spaceflight — but here on Earth. I took part in a four-month NASA Mars simulation in Hawaii and projects in Poland and out at sea. It helped me prepare more for the mission ahead with SpaceX.

Q: Being an astronaut requires being in top physical shape and top-notch technical skills. How did you prepare?

A: It was a really fun, yet intense, six months before launch. There was intensive training with my crewmates — mission funder Jared Isaacman, physician assistant and pediatric cancer survivor Hayley Arceneaux, and Air Force veteran and engineer Christopher Sembroski. We completed centrifuge training, Dragon simulations at SpaceX, observations of other launch operations, Zero-G plane training, altitude training, and additional classroom, simulation and medical testing. As the mission pilot, I worked closely with Jared to go through all of the systems of the Dragon capsule, to learn what we could and could not do and how to deal with contingencies and emergencies. I essentially had to become a systems engineer in six months.

We also did crew bonding — hiking Mount Rainier, flying fighter jets and doing centrifuge training. We were trained the same way as NASA astronauts, except for the qualifications for being on the International Space Station.

At times, it was a struggle to overcome self-doubt. I learned to be patient with myself in managing my impostor syndrome — the fear of not being good enough, not being accepted, saying the wrong thing.

Q: You gave a TEDx talk about overcoming imposter syndrome. What tips do you have for other people who doubt their abilities and feel like a fraud at times?

A: It's how you talk to yourself. When a thought comes up that fills me with doubt and makes me feel fear, I try to have an inner conversation and rationalize with it. A lot of things my dad told me come to mind, such as, “Don't talk yourself out of opportunity.” And let somebody else decide if you're qualified or not. If I hear a voice that says, “They’ll never select you,” I counter it with, “What if they do select me?” You never know if they’ll select you if you don’t apply. So I at least apply and see what happens.

Q: Tell me about your role as mission pilot for Inspiration.

A: My role as the mission pilot was to help provide situational awareness for my commander and crew. The Dragon capsule is autonomous, and it's got a flight computer that will go through all of its sequences. My job was really to understand how all of the systems interact from a system engineering standpoint. And if something were to go wrong, what we could or could not do as a crew. It was pretty cool to learn how to be a systems engineer over six months, when I'm a geoscientist.

Q: On launch day, you’ve been quoted as saying you felt the hopes and dreams you carried for people of color, especially Black women. What was going through your head when Inspiration4 lifted off?

A: I was just so excited to be a part of it, but I was also relieved that we had made it to that point — I was actually going to space! I had a job to do as the mission pilot, so I was keenly focused on my tasks. But that 9-year-old in me who had dreamed of becoming an astronaut was just gleeful. 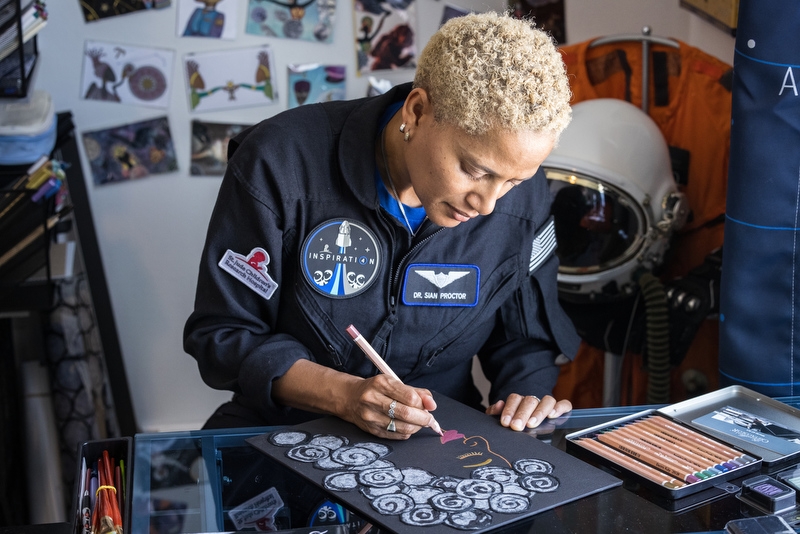 True to her motto, Space2inspire, Proctor creates artwork to encourage conversations about creating a just, equitable, diverse and inclusive space for all humanity to advance spaceflight. Photo by Charlie Leight/ASU News

Q: What messages do you hope to convey in your art, including your Space2Inspire theme?

A: I'm an Afrofuturist artist and poet, so thinking about the future of human space flight through an Afrocentric lens is important to me, particularly when it comes to creating that JEDI space for all humanity. I encourage people around the world to use their unique space to inspire those within their reach and beyond.

More than one-quarter, or 27%, of 7,651 suicides in Arizona between 2015 and 2020 involved a problem with the victim’s intimate partner, a new Arizona State University study reports.Other findings of the Arizona Violent Death Reporting System’s Suicide Summary Report, compiled by the ASU-based Center for Violence Prevention and Community Safety at the School of Criminology and Criminal Justice...

Research also showed 3 in 5 victims had a history of known suicidal thoughts, attempts or disclosure of intent

More than one-quarter, or 27%, of 7,651 suicides in Arizona between 2015 and 2020 involved a problem with the victim’s intimate partner, a new Arizona State University study reports.

Other findings of the Arizona Violent Death Reporting System’s Suicide Summary Report, compiled by the ASU-based Center for Violence Prevention and Community Safety at the School of Criminology and Criminal Justice: 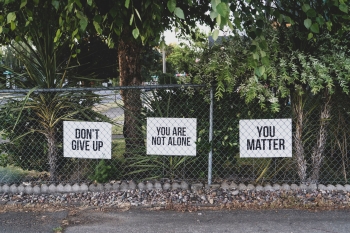 Charles Katz, the center’s director and an ASU criminology and criminal justice professor, said the data tell the story of how premeditation, mental illness and substance abuse can affect an action many people consider to be spontaneous — and how others might be able to influence prevention.

“(In many cases), people knew (the victims) were thinking about it, that they had attempted suicide in the past or had told someone they were intending to kill themselves,” Katz said. “While it might make some people uncomfortable, we all need to be more aggressive in reaching out and try to help them get the help they need.”

“When we think someone is contemplating suicide or is at risk of suicide, we need to be more aggressive in removing guns from the home,” Katz said. “We need to think about others who care about the person such as parents, friends and others who have the ability to step in and say, ‘You don’t need this in the house at this time,’ and remove it for their safety. It is a terribly hard conversation to have, but it can save someone’s life.”

The Center for Violence Prevention and Community Safety and the School of Criminology and Criminal Justice are part of ASU’s Watts College of Public Service and Community Solutions. September is Suicide Prevention Awareness Month.