The ASU Library, in collaboration with Tempe Sister Cities and The Melikian Center: Russian, Eurasian and East European Studies, celebrates 50 years of citizen diplomacy in the Sister Cities program.

Visitors to Noble Library on the Tempe campus can explore stories and photographs documenting the program’s history. 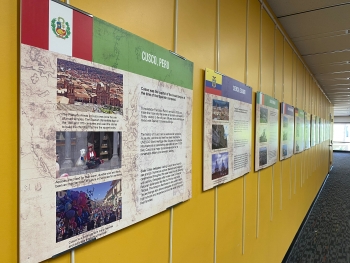 The displays illustrate how citizens can function as international diplomats for their countries by fostering high quality one-on-one relationships.

The catalyst for the partnership was a 2018–19 research cluster project with the Institute for Humanities Research led by Keith Brown, director of The Melikian Center.

“The idea evolved into setting up an exhibition that would celebrate the 50th anniversary of Sister Cities and a partnership between the Melikian Center, ASU Library and the Tempe History Museum came from that,” Humphreys said. “Deanna Carrera from the Tempe Sister Cities also joined the partnership by providing materials, logistical help and organizing the opening of the main exhibition in the Tempe History Museum.”

The Tempe Sister Cities program began 50 years ago when Tempe entered into a relationship with Skopje, Yugoslavia (presently North Macedonia), and became the first city in America with a sister city in communist Eastern Europe. Today, Tempe has 11 sister cities on five continents, and continues to promote peace and understanding through international friendship.

The exhibit explores these fascinating and diverse places and shows the history and impact of the Sister Cities program at home and abroad. 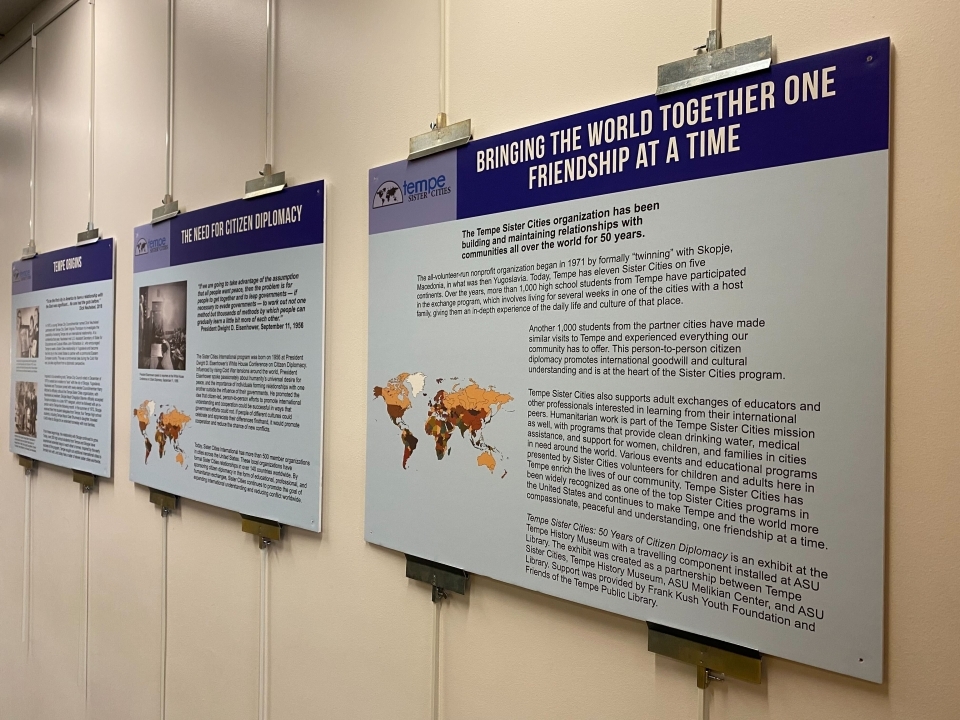 This relationship with Skopje has a special connection to ASU. Brown, who also serves as a professor at ASU's School of Politics and Global Studies, has written extensively about the history of the sister city relationship between Tempe and Skopje. And Humphreys also lived in the city for many years.

“In 1963, Skopje was hit with a major earthquake, which killed a lot of people and left about 200,000 people homeless,” Humphreys said. “I knew several people whose relatives, some of them parents and siblings, perished in the earthquake. Seventy-eight nations from all over the world cut across political divisions and offered supplies or took part in rebuilding the city. It was the first time since the onset of the Cold War that American, Soviet and other nations came together to launch a major humanitarian initiative.”

Joshua Roffler, Tempe History Museum curator said, “We’re excited to be able to bring this exhibit to more locations and help promote citizen diplomacy. The Tempe Sister Cities program has had an incredible impact on our city, and we’re excited to share these highlights of the 11 cities with ASU Library visitors.”

The exhibit will be on display on the second floor of Noble Library through October.

“We’re lifelong learners” is a saying that Arizona State University students are used to hearing. It is three simple words that the university abides by, but it is also a quote from Kim Kiyosaki, one of the featured speakers at a speaker series event hosted by the T.W. Lewis Center for Personal Development in Barrett, The Honors College at ASU. The seminar, the first in a five-session series...

“We’re lifelong learners” is a saying that Arizona State University students are used to hearing. It is three simple words that the university abides by, but it is also a quote from Kim Kiyosaki, one of the featured speakers at a speaker series event hosted by the T.W. Lewis Center for Personal Development in Barrett, The Honors College at ASU. The seminar, the first in a five-session series, featured special guests and Barrett supporters Robert and Kim Kiyosaki. There will be four more sessions of the series, each focusing on various topics relating to finance and financial education.

Robert Kiyosaki was born and raised in Hawaii. After graduating college in New York, he joined the United States Marine Corps, serving in Vietnam as an officer and helicopter gunship pilot. Now, he is an American businessman, entrepreneur and author of more than 26 books, including the No. 1 personal finance book "Rich Dad Poor Dad." 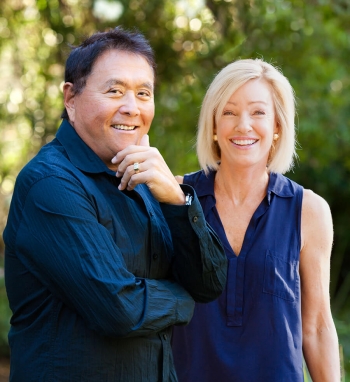 Robert and Kim Kiyosaki shared their knowledge of personal finance with students through a seminar series presented by the T.W. Lewis Center for Personal Development at Barrett, The Honors College at Arizona State University. Download Full Image

Kim Kiyosaki is a successful real estate investor, entrepreneur, speaker and author who is passionate about financial education. She has built her brand upon the international success of her books "Rich Woman" and "It’s Rising Time."

In 1996, the Kiyosakis created and launched the CASHFLOW board game, which was made to teach people about money, real estate and investing, as well as building a business and challenging perceptions of how to generate and sustain wealth, in a way that was fun and entertaining. Robert Kiyosaki said the purpose the board game was to change one’s internal dialogue, explaining, “If you don’t change your internal dialogue, your life doesn’t change.”

In 1997, they founded The Rich Dad Company with the mission “to elevate the financial well-being of humanity,” Robert said. It is centered on providing a financial education based on thinking like the rich.

“'Rich Dad Poor Dad' started when I was 9 years old,” Robert said. “When I was 9, I asked my teacher when we would learn about money and she was shocked.” His teacher responded to his question by telling him to ask his father.

Robert’s father, whom he alluded to as "poor dad," was brilliant and had a successful career. His father worked his entire life, set money aside for retirement, but never accumulated any wealth. After speaking to his father about money, Robert said his father told him to “ask my rich friend’s dad; he’s an entrepreneur.”

The friend’s dad, whom Robert called "rich dad," understood the difference between an asset and a liability, and that assets put money in your pocket. Robert’s "rich dad" taught him how to become financially free by taking risks, using debt, buying assets and creating cash flow.

These two very different ways of thinking inspired Robert to write "Rich Dad Poor Dad" to teach financial education that is necessary in order to think like "rich dad." Robert and Kim aimed to impart some of these lessons to Barrett students who were present at the speaker series, in hopes of teaching financial education to the next generation.

Ann Atkinson, executive director of the T.W. Lewis Center, said one of her favorite takeaways from the seminar is Robert’s coin flip concept, in which he explained there is no such thing as a two-sided coin, and it’s the reason why there will always be disagreements. “All coins have three sides: Heads, tails and the edge,” he explained. “Intelligence is standing on the edge; not taking a side.”

"I am not interested in working a 9-to-5 job after college, but I still want to make money,” she said.

The lesson from the Kiyosakis’ presentation that most stood out to Reyes was “if you don’t change your internal thinking, your life won’t change.”

“I feel like a lot of people struggle with that,” Reyes said. 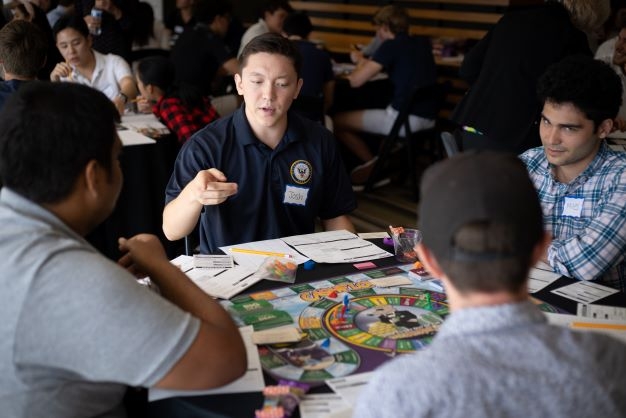 Isabella Meadows, a Barrett Honors College junior majoring in accounting and finance with a minor in real estate, said she attended this workshop series because she has looked up to Robert her whole life.

“He has been one of my biggest role models,” she said. “I admire his mindset and I want to be surrounded by and soak in his mentality, the mentality that sees the good in life and the abundance in life and the power to shape your reality through learning and mindset changes,” Meadows said.

“My experience from the lecture part of the workshop gave me the chills. Chills of inspiration, of empowerment, of life,” added Meadows, who has read Robert’s books and played the CASHFLOW board game as a kid.

“To hear Mr. Kiyosaki speak words of life and of truth right in front of me... (it) stirred something in my soul,” she said. “If I had to describe my experience in one word, I would say ‘magic.’”

Following the Kiyosakis’ presentation, students played the CASHFLOW board game, with the winner of each game receiving the board game as a prize.

“Playing CASHFLOW, I learned that sometimes you need to have patience and not take the first deal that comes your way,” Meadows said. “When you say ‘yes’ immediately to something, you are saying ‘no’ to something else, and that ‘no’ might actually have been 10 times more valuable than the fastest option to present itself.”

“I learned something that I could immediately apply to my daily life. I learned that there is no such thing as a rich person or a poor person. Rather, there are people with a rich mindset and those with a poor mindset, and that mindset determines the ultimate financial situation of their lives,” she said

“I had an incredible experience throughout the first session of the Cash Flow Workshop Program,” Naik added. “The lessons I learned are such valuable lessons that I will never forget and that I am sure will provide endless benefits for me in the future.”

Along with the continuation of this speaker series, the T.W. Lewis Center will have many more events like this throughout this academic year.

“If there’s anything I recommend in this world, it is that students attend the T.W. Lewis Center programs,” Shivani said. “There is infinite value in the T.W. Lewis Center’s mission of personal development, and no matter what type of student attends the center’s events, every single person benefits in some way.”