The new Center for American Institutions, housed in The College of Liberal Arts and Sciences at Arizona State University and established in summer 2022, has a single mission: to foster and renew respect for foundational American institutions through undergraduate education and public outreach.

Surveys show that many Americans have lost confidence in their institutions. The Center for American Institutions seeks to restore that confidence, especially in college-aged audiences, who may not understand how these institutions work within a constitutional framework. 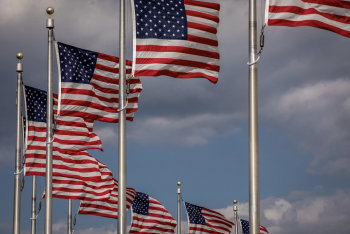 “There are many common questions I’ve heard from students about our institutions, such as: Why are Supreme Court justices appointed without term limits? Why was the Federal Reserve Bank created and how are interest rates set? What role does organized religion play in maintaining a well-ordered society? What is religious liberty and why did the framers of the Constitution guarantee religious freedom? What role should the media play in society?” said Donald Critchlow, professor of American political history at the School of Historical, Philosophical and Religious Studies and director of the center.

“We want to answer these questions and help foster respect for our institutions through public forums, discussions and research.”

“Over the course of the next five years, the Center for American Institutions will form national panels composed of leading public officials to examine key institutions," Critchlow said. "These panels are charged with issuing national reports based on objective data and prescriptive remedies to improve these institutions. These reports will be widely distributed to the media, public officials and the public. These panel reports will present an opportunity for ASU to have a national impact on these discussions.”

ASU students will serve as research assistants for these panels and will have the opportunity to meet national public figures. Additionally, the center will provide opportunities for students to participate in education forums sponsored by the center.

“For example, the center is facilitating a Reagan Ranch Retreat in Santa Barbara, (California), this year where 15 ASU students will participate in a moot Supreme Court case about free speech,” Critchlow said. “The center is funding travel and lodging expenses for students participating in this three-day workshop. This is the first of many such workshops that the new center will sponsor.”

In addition, the center will continue offering the ASU High School Leadership Academy, which attracts hundreds of high school students from the area each year. The center plans on expanding this program statewide by sponsoring one-day workshops in cities and towns across the state.

The official launch event is planned for 6 p.m. on Friday, Oct. 14, in Armstrong Hall on ASU's Tempe campus, and event RSVPs are now being accepted. It will feature comments by Arizona Board of Regents’ Jessica Pacheco, Arizona Supreme Court Justice Bill Montgomery, Ingrid Gregg, center Director Donald Critchlow and Associate Director Jonathan Barth, and will include a keynote by author Bret Weinstein.

Marchand, Brown Among Many Who Shine in Maroon & Gold

Marchand, Brown Among Many Who Shine in Maroon & Gold