Arizona State University's Office of National Scholarships and Advisement proved to be an indispensable resource for him in that pursuit, allowing him to make networking a habit to absorb wisdom from professionals who were once in his shoes. 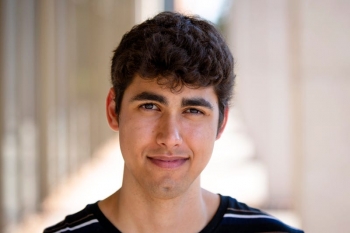 “What I lack for in resources, I make up for in determination,” Al-Asady said.

Spurred on by his desire for education, he gained admittance into selective programs.

Al-Asady’s motivation helped him earn financial aid from the School of Politics and Global Studies Director’s Scholarship and the Ross R. Rice Award, both of which allowed him to leverage the resources of a world-class research university by living on campus.

The scholarships afforded him the chance to engage with professors, attend evening lectures and have the space for thought and reflection.

“I am grateful to (the school) and the Rice family for their meaningful investment in my academics,” Al-Asady said.

The School of Politics and Global Studies laid a foundation for him to explore his academic interests as a student in Barrett, The Honors College studying political science and civic economic thought and leadership. His studies have led him to analyze issues from a multifaceted perspective with the understanding of social sciences and liberal education.

“These converging academic experiences enable me to develop as a thinker, student and future leader,” Al-Asady said.

Beyond his academic interests, he aims to gain hands-on experience in the professional world that help sharpen his skill set for post-graduation.

As a board member of Secular AZ, Al-Asady advocates for the constitutional separation of church and state through public policy. His work mainly adheres to influencing public opinion in the media on topics including LGBTQ rights, gun reform and reproductive freedom.

“As a first-generation American with First Amendment rights enshrined in the Constitution, I feel a moral responsibility to use my freedom of speech to tilt the arrow of justice forward,” Al-Asady said.

“In this vein, writing holds a nearly sacred value, as a funnel through which my ideas can be communicated to the community at large.”

As Al-Asady looks forward to the future, he hopes to be recognized not just for his accomplishments but also for his character. At 19 years old, he is proud of where his purpose has led him.

“My successes are also the successes of my parents, teachers and mentors. Each person I have encountered has left, for better or for worse, an effect on me; it is the accumulation of these effects that have shaped the person I am today,” he said.

Al-Asady acknowledges that mentorship and networking are vital to any industry, especially those in political science and international relations. He notes that hard work and perseverance will get you to your desired future.

“University is an exciting time to explore your interests without having to commit to a single path. You are shaping the person you want to become, so please never lose sight of that when adversities manifest. We are stronger than we often realize,” Al-Asady said.

During his 44 years at The Washington Post, Leonard Downie Jr. investigated and led coverage of some of the most significant events of the 20th century. Downie, the Weil Family Professor of Journalism at Arizona State University's Walter Cronkite School of Journalism and Mass Communication, was an editor for The Post’s investigation of the Watergate scandal, which resulted in President Richard ...

Cronkite School Professor Leonard Downie Jr. investigated, led coverage of some of the most significant events of the 20th century

During his 44 years at The Washington Post, Leonard Downie Jr. investigated and led coverage of some of the most significant events of the 20th century.

Downie, the Weil Family Professor of Journalism at Arizona State University's Walter Cronkite School of Journalism and Mass Communication, was an editor for The Post’s investigation of the Watergate scandal, which resulted in President Richard Nixon’s resignation, covered the Jonestown massacre in 1978 and, as executive editor, oversaw The Post’s coverage of President Bill Clinton’s affair with Monica Lewinsky, which ultimately led to Clinton’s impeachment. Downie amassed a trove of historical documents, notes, manuscripts and other materials from those stories, as well as other significant events that occurred during his journalism career, from his days as a college student at Ohio State University to his time with The Post.

And now those items are available to the public.

The Library of Congress has archived and made available to the public Downie’s papers, an expansive collection of notes, correspondence, public records, unpublished writings and other documents spanning his distinguished career.

Downie started at The Washington Post in 1964, progressing from intern to investigative reporter, local and national editor, London correspondent, managing editor and then leading the newspaper as executive editor from 1991 to 2008. Under his leadership, The Post won 25 Pulitzer Prizes, more than any other newspaper under a single executive editor.

The Library of Congress reached out to Downie regarding his materials about five years ago, but Downie wanted to finish his memoir, “All About the Story: News, Power, Politics and The Washington Post,” before donating any items.

The library maintains a manuscript section that includes collections from people of interest in an effort to preserve their work and life stories.

“It was an honor for the Library of Congress to want my material. It’s a privilege,” Downie said. “I discovered a lot of things I didn’t realize I had.”

A historian from the library met with Downie and reviewed the materials to see what was most interesting, eventually taking most of his items.

Downie said his collection was already sorted because he used most of the documents to write his memoir.

“They said I was much more organized than most people they encounter,” he said.

The documents include the original police report from the Watergate scandal, as well as reporter Bob Woodward’s notes from the preliminary hearing for the men arrested at the Watergate complex. Downie also submitted the manifesto written by Unabomber Ted Kaczynski.

Other documents include a script from “The Post,” the 2017 movie about Post publisher Katherine Graham’s decision to publish the Pentagon Papers detailing the United States’ involvement in Vietnam, with Downie serving as a consultant for the film; notes from his coverage of the Jonestown massacre; and documents from meetings and retreats that give insight into the newspaper and its operations.

There are also transcripts from interviews for his book, “The News About the News,” with Tom Brokaw, Peter Jennings and Dan Rather, who were once the leading anchors of the three major television networks.

Downie, who has taught at the Cronkite School for 13 years, said he is grateful for the opportunity to share this significant historical information with a wider audience.

“It’s important for me to do this,” he said.