​When he received his first bachelor’s degree in management from the United States Coast Guard Academy, Mike Freeman had every intention to become a businessman after his five years of Coast Guard service were completed. But all of that changed when Freeman reported to his first assignment.

“Working with aviators landing their helicopters on the tiny flight deck of the Coast Guard’s USCGC Confidence ship convinced me that aviation was the path for me,” he says. “Once accepted into flight school, I became a fanatic and learned as much about aviation and aerospace as possible.” 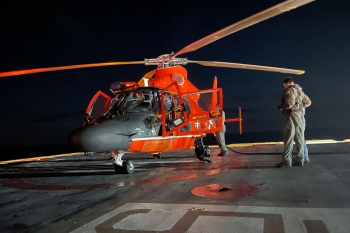 With his newfound passion, Freeman didn’t wait to leave service to pursue his next goal and started his journey to earn a bachelor’s degree in electrical engineering from the School of Electrical, Computer and Energy Engineering, part of the Ira A. Fulton Schools of Engineering at Arizona State University. The field has many applications in aviation and aerospace technology, such as designing sensors and aircraft instrumentation. Because his military assignments had him moving around the country, Freeman chose the program’s online delivery method, which shares the same course path and ABET accreditation as the in-person offering.

Freeman also knew he wanted to earn an advanced degree and became interested in pursuing the accelerated master’s degree program, enabling him to complete both his bachelor’s and master’s degrees in five years.

“I first heard of the accelerated degree program when I was applying for school in 2017 and knew that it would be a great option for me with my full-time career and family commitments,” he says.

However, the accelerated electrical engineering master’s degree program was only offered on campus when Freeman started at ASU. Yet, he was determined to complete it as an online student.

“Our success in online deployment of our undergraduate, master’s and accelerated degrees has greatly expanded our reach to students who would otherwise not have access to our programs,” says Stephen Phillips, director of the School of Electrical, Computer and Energy Engineering. “Graduates like Mike Freeman demonstrate what our highly motivated students can accomplish.”

The accelerated program’s online delivery method follows the same curriculum as its in-person counterpart, including the same rigorous expectations for students to gain hands-on engineering experience. Freeman’s favorite part of the program was the undergraduate senior capstone project.

“My capstone team had a fantastic mentor, David Ramirez, who at the time worked at General Dynamics Mission Systems. He helped us get a home-built radar set off the ground and running,” Freeman says. “It was really enjoyable figuring that challenge out.” 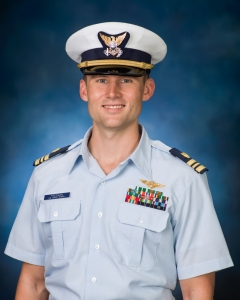 As an online student, Freeman says communication was key. He informed his instructors early on that his schedule as an active duty service member could be unpredictable at times, and with tasks like hurricane response deployments, he might need flexible deadlines to complete his assignments.

“It’s gotten much easier to connect with professors and other students during my time at ASU, and that will hopefully continue to improve,” Freeman says.

He credits a large part of his success in the program to School of Electrical, Computer and Energy Engineering academic advising staff members Robert Monahan and Lynn Pratte.

Monahan sought authorization of the online delivery method for the accelerated electrical engineering master’s program and Pratte served as Freeman’s academic advisor for the graduate portion of the program. Freeman praises Pratte as being highly invested in her students’ success.

“Working with Mike has been awesome,” Pratte says. “He advocated for himself and other students who are interested in this program. Actions like his are what make ASU No. 1 in innovation.”

Freeman took two courses in electronic materials and quantum mechanics with Michael Goryll, an associate professor of electrical engineering who remembers Freeman as a standout student.

Goryll helped Freeman prepare for his comprehensive exam, a requirement to receive his master’s degree, and was so impressed with Freeman’s achievements that he nominated him to the Institute of Electrical and Electronics Engineers Eta Kappa Nu honor society.

“My experience working with Mike has been great,” Goryll says. “While the quantum mechanics course is very mathematical, Mike was very enthusiastic about it and never lost his motivation.”

Now a lieutenant commander, Freeman works as a helicopter flight examiner and instructor pilot at the Coast Guard’s Air Station Houston in Texas.

He hopes to use his new degree to seek further technical leadership roles in the Coast Guard. After his military service is up, Freeman will pursue work in technical roles in the aerospace industry.

“I’m a total space nerd and look forward to advancing humanity’s presence in space,” he says.

In 2019, Maria Cornejo-Terry, a senior Arizona State University political science student, was looking forward to studying abroad as a participant in the U.S.-U..K Fulbright Commission U.K. Summer Institutes (FUKSI), but the pandemic put a damper on her plans.The Fulbright U.K. Summer Institutes are three- to four-week programs for undergraduate students from the United States who have no or ver...

A bold cure for the irrelevant university?

In 2019, Maria Cornejo-Terry, a senior Arizona State University political science student, was looking forward to studying abroad as a participant in the U.S.-U..K Fulbright Commission U.K. Summer Institutes (FUKSI), but the pandemic put a damper on her plans.

The Fulbright U.K. Summer Institutes are three- to four-week programs for undergraduate students from the United States who have no or very little travel experience outside North America. Participants explore the culture, heritage and history of the U.K. while experiencing higher education at a U.K. university. 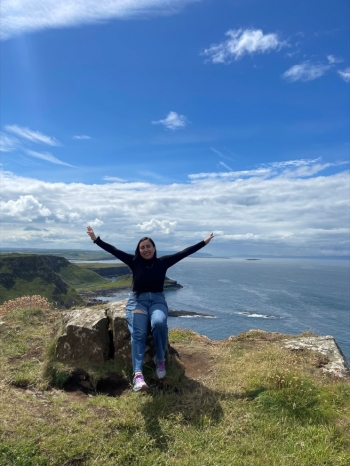 The U.K. Summer Institutes are supported by donations from private individuals and through a Study Abroad Engagement Grant from USA Study Abroad within the Bureau of Educational and Cultural Affairs, U.S. Department of State, and the Fulbright Commission’s partnership with top U.K. educational institutions.

Students participating in the program receive round-trip airfare, paid tuition and fees at their host institutions, accommodations and, in some cases, a daily stipend for meals.

This past summer, Cornejo-Terry finally got her chance to travel to the U.K., where she spent two weeks studying at Queen’s University Belfast in Northern Ireland.

“I feel very grateful for being able to participate in the FUKSI program, especially because I was chosen for it when the pandemic began. I was afraid I would not be able to participate due to COVID-19 restrictions, but thankfully, this summer I was able to attend my program,” Cornejo-Terry said.

Cornejo-Terry, a student in Barrett, The Honors College at ASU, was raised in Douglas, Arizona, and Agua Prieta, Sonora, Mexico. As a Latina border native, she is interested in pursuing a master’s degree in migration studies and learning more about border securitization and policies related to border communities and migrants.

She has been working on her honors thesis, which focuses on Title 42, a policy implemented at the start of the COVID-19 pandemic in the U.S. to prevent migrants from seeking asylum, and its application at the U.S.-Mexico border port of entry between Douglas and Agua Prieta.

We asked Cornejo-Terry about her interests and experiences as a FUKSI participant. Here’s what she had to say.

Question: What did you study in your program at Queen’s University Belfast?

Answer: An integral part of my study was to analyze the reconciliation process between Protestants and Catholics in Northern Ireland in relation to the Good Friday Agreement signed in 1998 after Bloody Friday and the Troubles.

Q: How will your experience in FUKSI inform your studies at ASU?

A: Religion was not entirely the focal point of my program, but identities formed through religion in Northern Ireland were an integral part of understanding how systems oppressed groups in predominantly white homogenous communities outside of racial identities. I think my experience made me realize the importance of recognizing religion as a social construct in domestic and foreign policies, which motivated me to take a course in religion, ethics and international politics.

Q: What are your goals, and how will your participation in FUKSI help you achieve them?

A: I’m from Douglas, Arizona, and Agua Prieta, Sonora, two border towns that have shaped my desire to question border militarization. One aspect of my FUKSI program was to show the aftereffects of the Good Friday Agreement, which included taking away border militarization between the border region of Ireland and Northern Ireland. Although the resolution is far from over between both groups, I think the way local communities use art to maintain their history and beliefs is an important way to resist the erasure of historical moments that fatally impacted their communities. In contrast, the erasure of border history at the U.S.-Mexico border is a prevailing issue that can be highlighted and partially resolved by border communities using art to share their stories and keep them alive for future generations. Thus, I hope that I can foster discussion of border erasure through art in my community.

Q: This was your first time traveling outside of North America. What are your impressions of the trip and the places you went?

A: I was not quite sure what to expect when I arrived in Northern Ireland, but I was not expecting to feel so connected to nature. Another FUKSI participant and I went to multiple nature locations, such as the Giant's Causeway and the Dark Hedges. I absolutely loved the Giant's Causeway, although I accidentally hiked in the wrong direction. Everywhere we went, you could see sheep, which was a concept foreign to me, coming from a life in the desert. Despite the contrasting climates and environments, my trip made me appreciate nature a lot more. I also immensely enjoyed the museums in Belfast, specifically the Titanic Museum. The Titanic was built and first sailed in Belfast, making it incredibly exciting to visit as it was interactive and showed letters written by passengers on the ship that, sadly, were never sent.

Q: If a fellow student was interested in applying for FUKSI, what would you tell them?

A: I think I would tell all students to apply. Specifically students with diverse backgrounds. In my case, I think my border identity and my LatinxThe gender-neutral term for a person from, or whose ancestors were from, a Spanish-speaking land or culture or from Latin America. identity made me stand out from other applicants. My identities also helped me be conscious of cultural identities that exist within and outside of border lines, which was important to understand in regard to my own program. It will be different for someone else, but I think highlighting your passions and identities emphasizes why you deserve to be in the program because no one is exactly the same as you. Even if you feel outside of your comfort zone because you question your ability to succeed, apply. Don’t limit yourself based on what you feel like you deserve, because you most likely are smarter and worth more than you realize.

Q: You worked on your FUKSI application with the Office of National Scholarships Advisement (ONSA) at ASU. What kind of assistance did you receive there?

A: I went to their workshops and set up personal meetings with Dr. Jacquelyn Scott Lynch and Dr. Laurie Stoff. However, I spent most of my time working with Dr. Scott Lynch, who helped me home in on my strengths. I highly recommend anyone applying for national scholarships to connect with ONSA. In my case, Dr. Scott Lynch and Dr. Stoff were extremely knowledgeable about the FUKSI program and Northern Ireland, which made it easier for me to understand what I should focus on to stand out in my application and my interview process.