As a senior in high school, Angie Haskovec’s future career plans centered around becoming a nurse. She grew up with parents who consistently role-modeled caring for others, and her aunt, someone who always inspired her, was a nurse.

“I think it was always about helping people, and I thought, what better way to do that than through helping them at some of their most vulnerable and difficult times?” Haskovec said. 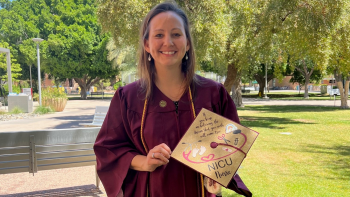 After years of working with Sun Devil alumni nurses, Angie Haskovec decided it was time to become one of them. Photo courtesy Angie Haskovec Download Full Image

But life took her in a different direction. Haskovec pursued a career in higher education, and along the way, she started a family. When she joined Arizona State University's Edson College of Nursing and Health Innovation in 2016 as the alumni coordinator, the idea of recommitting to her goal of becoming a nurse started to take shape.

“I always felt rewarded in my career, but then when I came to Edson College I met so many people who are doing incredible things to make a difference in the world,” she said. “That was really the catalyst. The dream was always there, it just kind of had sparks added to it, and I decided the time is now.”

Haskovec started in the college’s concurrent enrollment program, a time-efficient and cost-effective option that enables students to earn an associate degree and a bachelor’s degree in nursing simultaneously.

As a concurrent enrollment student, Haskovec took the required in-person coursework necessary to become a registered nurse at a community college. At the same time, she was taking classes online at Edson College.

Throughout the program, she knew exactly where she wanted to work in the hospital, the newborn intensive care unit, or NICU as it’s known. It’s a unit she was intimately familiar with. In 2015, her son was born at 24 weeks and spent 12 days in the NICU.

“I had been impacted so deeply by the nurses who cared for me and my family that I wanted to be able to give back in a similar way to what they gave to me as a complete stranger,” Haskovec said.

In what she described as one of her favorite moments during her nursing education, Haskovec was able to bridge her personal, community college and Edson College experiences through her bachelor’s program capstone project.

“I was able to create a training program for new nurses in the NICU on how to be a bereavement support person for families that my former OB instructor now shares in her class at the community college,” she said. “It felt like that was my full circle moment. Even though I’m just a new grad and I don’t know very much compared to more experienced nurses, I was still able to make a difference.”

This May, Haskovec turned her tassel, making her long-held dream a reality and joining the ranks of the alumni she’s worked with all these years. She’s always held health care workers in high regard but has gained even more respect for them during this process.

Right now Haskovec is in the middle of orienting at a local hospital in their NICU while continuing her alumni coordinator role. In many ways, she says becoming a nurse has allowed her to connect on a new level with many alumni because now she knows firsthand what it’s like.

“I take what I learn in the hospital and bring it here and use it when I talk to alumni and even current students about what they’re going through. It allows me to encourage them along the way,” she said.

As for what the future holds, Haskovec is hopeful she’ll find a way to balance her nursing career and higher education career. In the meantime, she’s savoring the here and now and feeling proud of her accomplishments.

“You only live once. I’m a proud mother of six and I want to be a source of inspiration for my children and demonstrate that it’s never too late to follow your dreams and achieve a goal,” she said.

Arizona State University has announced the appointment of Dr. Sherine Gabriel to the position of University Professor of the Future of Health Outcomes and Medicine, and chair of the ASU Health Outcomes Design Council.Reporting to ASU President Michael Crow, Gabriel will be responsible for facilitating the continuing evolution of a unified health and health outcomes focus at ASU.She will partner wi...

Barrett, The Honors College , School of Politics and Global Studies , The College of Liberal Arts and Sciences , Office of National Scholarship Advisement

Reporting to ASU President Michael Crow, Gabriel will be responsible for facilitating the continuing evolution of a unified health and health outcomes focus at ASU. 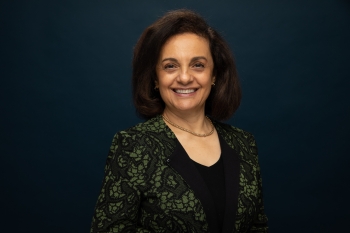 She will partner with faculty and staff across the university’s complete health care portfolio, leveraging existing assets to design new, transdisciplinary approaches to teaching and forming collaborations to tackle some of the most complex medical education challenges and opportunities facing our society today.

Gabriel has dedicated her career to advancing innovative education training and equitable health outcomes as an epidemiologist and rheumatologist. She worked closely with teams and in collaboration with academic partners to conduct research, and to design and implement new education models to better prepare future health scientists and health care providers to advance health equity and improve health.

She completed her medical training at the University of Saskatchewan, Canada, where she was named a 2022 recipient of the USask Alumni Lifetime Achievement Award, the highest honor bestowed by the university. She completed her residency at the Mayo Graduate School of Medicine in internal medicine and completed fellowships in rheumatology at the Mayo Graduate School of Medicine and Wellesley Hospital in Toronto. She received a master’s degree in clinical epidemiology and biostatistics from McMaster University in Hamilton Ontario, Canada.

Gabriel's resume includes an extensive list of leadership positions in medicine and academia, including: numerous professorial appointments within the Mayo Medical School, culminating with being awarded the William J. and Charles H. Mayo Endowed Professor and serving as dean; professor, dean, Distinguished University Professor and CEO appointments at the Rutgers Robert Wood Johnson Medical School and Medical Group; and most recently the James A. Campbell, MD Distinguished Professor and President of Rush University, as well as Chief Academic Officer of the Rush University System for Health. Rush University is a nationally ranked academic medical center in Chicago and includes a medical college, college of nursing, college of health sciences and a graduate college. One hallmark of Gabriel's time at Rush was establishing the Rush BMO Institute for Health Equity, which now coordinates Rush’s health equity initiatives across all system hospitals.

Among her long history of service to professional associations and on government and non-government boards and committees, Gabriel is a former President of the American College of Rheumatology, the world’s leading professional organization of rheumatologists and rheumatology health professionals dedicated to advancing research and training to improve health outcomes for individuals with rheumatic diseases. She has also served on many national committees, most significantly as a member of the Advisory Council of the National Institute of Arthritis and Musculoskeletal and Skin Diseases at the National Institutes of Health, as chair of the FDA Drug Safety and Risk Management Committee and as founding chair of the Methodology Committee of the U.S. Government Accountability Office’s Patient-Centered Outcomes Research Institute, an institute created through the Patient Protection and Affordable Care Act. She is an elected member of the National Academy of Medicine and an elected member of the Association of American Physicians, the society of leading physician-scientists in the U.S.

Notably, Gabriel comes to ASU with a history of building strong working relationships within the university. During her tenure as dean at Mayo Clinic, she worked closely with the College of Health Solutions and EdPlus to develop and launch the new Mayo Medical School in Arizona and to incorporate the MS/certificate and MD/MS programs in the science of health care delivery. These innovative programs introduce Mayo medical students to health systems design and engineering principles, as well as health economics, leadership and management, with the goal of optimizing health care delivery and health outcomes for all.