The bacteria that reside in the human gut, otherwise known as “the gut microbiome,” are known to play both beneficial and harmful roles in human health.

Because these bacteria are transmitted through milk, mothers can directly impact the composition of bacteria that their offspring harbor, potentially giving moms another pathway to influence their infant’s future development and health. 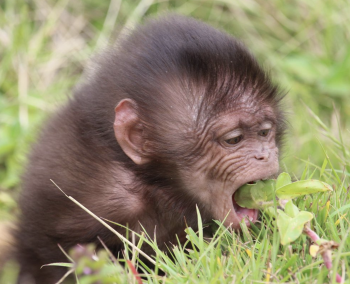 A baby gelada foraging in Simien Mountains National Park in Ethiopia. Their early-life gut microbiome, from infancy through first years of life, are shown to be maternally influenced as they get older. Photo credit: Sharmi Sen/University of Michigan Download Full Image

Now, a study of wild geladas — a non-human primate that lives in Ethiopia — provides the first evidence of clear and significant maternal effects on the gut microbiome both before and after weaning in a wild mammal.

This finding, published in Current Biology, suggests the impact of mothers on the offspring gut microbiome community extends far beyond when the infant has stopped nursing.

A research team co-led by Stony Brook University anthropologist Amy Lu and biologists Alice Baniel and Noah Snyder-Mackler at Arizona State University came to this conclusion by analyzing one of the largest data sets on gut microbiome  development in a wild mammal.

They used high throughput DNA sequencing to identify and characterize the bacteria residing in the guts of young geladas and identified 3,784 different genetic strains of bacteria belonging to 19 phyla and 76 families. However, this diversity was not equally distributed across the developmental spectrum: similar to what is seen in humans, younger infants had the least diverse microbial communities that gradually became more diverse as they got older.

These changes reflected what the infant was eating, specifically when they switched from consuming milk to consuming more solid foods. These diet-focused bacteria actually help infants process foods — for instance, milk glycans, which cannot be digested without the help of bacteria.

However, it was the team’s findings of strong maternal effects on the infant gut microbiome both before and after weaning that was the most groundbreaking.

“Infants of first-time moms showed slower development of their gut microbiota, meaning that their guts were specialized toward milk digestion for longer compared to kids from other moms. This may put offspring of newer moms at a slight developmental disadvantage,” Baniel said. “In addition, even after infants were weaned, their microbiome community was more similar to mom’s than to other adult females in the population, suggesting that moms may be sharing microbes with their offspring.”

According to Lu, “Early life gut microbial development is known to have a large impact on later life health in humans and other model organisms. Now we have solid evidence that mothers can influence this process, both before and after weaning. Although we’re not 100% certain how mothers do this, one possible explanation is that they transfer specific bacteria to their offspring.”

According to Snyder-Mackler, “These early life changes might have far-reaching consequences – impacting the health and survival of these offspring once they become adults.”

Future work from this research team is therefore going to examine how differences in the gut microbiome during infancy influence other aspects of development, such as growth, the maturation of the immune system or the pace of reproductive maturation. Luckily, because they are continuing to study the same infants as they age, they’ll eventually be able to link the infant gut microbiome and the early-life maternal effects to health, reproduction and survival in adulthood.

Alzheimer's conference at ASU to highlight advances in fight against disease

The Arizona Alzheimer’s Consortium Conference, which brings together some of the nation’s top scientists and physicians to discuss advances in the fight against Alzheimer’s disease, will be held Sept. 22 at Arizona State University’s Tempe campus.The one-day conference will include more than 100 interactive scientific presentations, 10 Q&A sessions with neurological research leaders an... 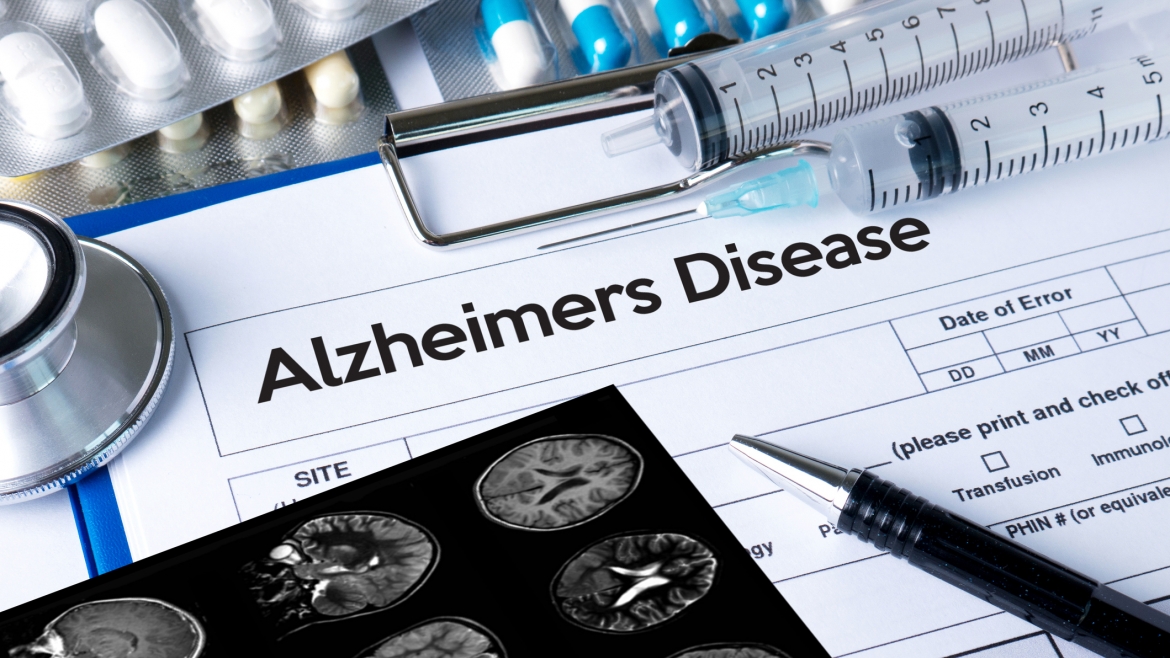 Alzheimer's conference at ASU to highlight advances in fight against disease

Event brings together some of the nation’s top scientists, physicians

The Arizona Alzheimer’s Consortium Conference, which brings together some of the nation’s top scientists and physicians to discuss advances in the fight against Alzheimer’s disease, will be held Sept. 22 at Arizona State University’s Tempe campus.

The one-day conference will include more than 100 interactive scientific presentations, 10 Q&A sessions with neurological research leaders and a keynote address by Sterling Johnson, the associate director for the Wisconsin Alzheimer Disease Research Center and the principal investigator for one of the world’s largest and longest-running studies of individuals at risk for Alzheimer’s disease.

Editor's note: The following interview has been edited for length and clarity.

Question: What advances in Alzheimer’s research will be talked about at this conference?

Reiman: One of the areas that there’s tremendous excitement about is the emerging role of potentially blood-based biomarkers. We now have brain imaging techniques and cerebral spinal fluid biomarker measurements that require you to put a needle in somebody’s back, and not a lot of people volunteer to do that. So, with the emerging development of potentially affordable, repeatable and widely accessible blood tests, you can imagine the chance to galvanize research and support drug development.

One of the real challenges to Alzheimer’s research has been the inclusion of individuals from underrepresented and underserved minority groups, an area that David has spent an awful lot of time thinking about. (Having blood tests) would help us know how these biological measurements or treatments that were investigated behave in these underrepresented groups.

Q: Would these blood tests be as simple as scheduling an appointment at your doctor’s office?

Reiman: We’re not really where we need to be yet in this space, but it has the potential to transform research, treatment development and clinical care.

I’ll give you an example in the clinical care space. There was a treatment that was approved by the FDA last year called aducanumab, which can help reduce amyloid beta plaque in the brain, a hallmark of Alzheimer’s disease. But you would need an amyloid PET scan to know who has plaque in the brain, and the test would be expensive and it’s not going to be feasible to do an expensive PET scan every two years. So instead of doing a $5,000 PET scan, what if you could do a $75 blood test to either reduce or eliminate the need for those PET scans? It could be helpful in reaching out to people who aren’t close to specialty centers and imaging centers.

Q: How close are we to those blood tests becoming a reality?

Reiman: These blood tests look very promising, but there’s more work that needs to be done. But I think they could be available in the next year or two.

Q: David, Eric mentioned underserved communities. What is known about the preponderance of Alzheimer’s in these communities?

Coon: There may be risk factors that increase the proportion of folks that are impacted in these communities. We really have to continue to establish ongoing relationships with these communities. I think there’s some myth that everything has to be hand-in-hand. The bottom line is there are a growing number of folks from underserved communities, from minority communities, that do engage in social media and utilize smartphones to help them stay connected, not only to providers but also to what’s happening in the research world. So, how do we provide ongoing education? How do we provide opportunities to help serve these families that are already impacted by Alzheimer’s disease?

Q: What are those risk factors you mentioned?

Reiman: We believe that genetic factors account for about 70% of a person’s risk in developing Alzheimer’s disease, leaving 30% which you could potentially intervene with to promote cognitive health and slow or delay the onset of symptoms. Also, we see a number of factors that promote a healthy heart that have been suggested to promote a healthy brain, like a heart-healthy diet, like the Mediterranean diet.

In the meantime, we are waiting to see what happens with some disease-modifying treatments. We’ve seen so much progress on Alzheimer’s research, understanding risk factors … but the glaring exception to this progress has been finding effective treatments. Once we have treatments that work, we’ll be able to know what biological changes are associated with the clinical benefit, further inform the development of treatments and speed up the evaluation of prevention therapies.

We’ll see what happens in the next year, but we have a 50-50 chance that these treatments (being currently tested) will demonstrate a benefit in the next few months in cognitively impaired individuals. And if they do, we’ll have a great chance in supporting and finding the approval of prevention therapies potentially in the next five years. There’s no guarantee, but we’ll know soon.

Reiman: We’ve just completed the world’s first trial of an investigational drug to prevent Alzheimer’s disease. We did a five-to-eight-year trial for which we were disappointed that we did not see a statistically significant benefit. But what this study did was show that prevention trials were possible, and it led to ways to accelerate the evaluation and approval of prevention therapy.

We have other prevention trials going on right now. And if those treatments work in the next few months, we’ll have an outstanding chance to find and support the ... prevention of clinical onset of Alzheimer’s disease by 2025. So there’s a lot of work happening in this space.