The School of Civic and Economic Thought and Leadership at Arizona State University has partnered with the Sandra Day O'Connor Institute for American Democracy to celebrate Constitution Day on Sept. 17 and the newly established Sandra Day O'Connor Civics Celebration Day, which will be observed on Sept. 26 this year.

Civics Celebration Day was signed into law in 2020 by Arizona Gov. Doug Ducey to celebrate a day when a majority of classroom instruction in the state's K–12 public schools is devoted to civics education. School districts and charter schools across Arizona are encouraged to use a wide range of engaging activities to teach students about civics. 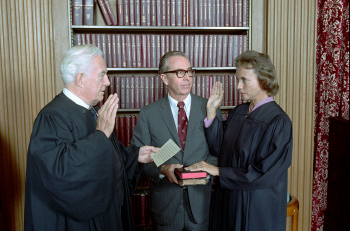 The week honors Justice Sandra Day O'Connor taking her seat on the bench as the first woman on the U.S. Supreme Court and commends her dedication to promoting civics education.

"We are proud to partner with the Sandra Day O'Connor Institute for American Democracy to empower teachers, students and Arizona citizens with civic education content," said Paul Carrese, founding director of the School of Civic and Economic Thought and Leadership. "As Justice O'Connor warned us, the country faces a civics crisis, and our school is ready to help bridge this alarming gap."

During the week between Constitution Day and Sandra Day O'Connor Civics Celebration Day, the center will provide expert visits to classrooms, connecting current issues and events with the principles of American civics; offer ready-made, short lesson plan designs; and present a special civics seminar for teachers hosted by the Center for Political Thought and Leadership in September and October.

"The Center for Political Thought and Leadership at ASU has the sole mission of supporting civic education, and we are grateful for Gov. Ducey's commitment to civic education," said Lucian Spataro, interim director of the center. "Civics Celebration Day takes us one step closer to increasing civics literacy in our state, and we are excited to provide teachers across Arizona with tools and content to share with their students."

As part of the collaborative effort, the Sandra Day O'Connor Institute for American Democracy will pay tribute to their founder with the following events:

"Civics education is vitally important to Justice O'Connor and the institute she founded," said Sarah Suggs, president and CEO of the Sandra Day O'Connor Institute for American Democracy. "We are committed to multigenerational civics education, civil discourse and civic engagement, each embodied in the life and work of Justice O'Connor, and are honored to work with (the school)."

Interactive dance performance asks audiences: 'Good or bad: Which witch is which?'

When Liz Lerman visited an art exhibition in the Scottish National Gallery titled “Witches and Wicked Bodies,” a display of prints and art depicting witches over the course of 500 years, she was struck by how the bodies of the women were shown as grotesque and unsightly, yet somehow still appeared powerful.“Every culture has its witches and every historical period – even now – has its wi...

Interactive dance performance asks audiences: 'Good or bad: Which witch is which?'

When Liz Lerman visited an art exhibition in the Scottish National Gallery titled “Witches and Wicked Bodies,” a display of prints and art depicting witches over the course of 500 years, she was struck by how the bodies of the women were shown as grotesque and unsightly, yet somehow still appeared powerful.

“Every culture has its witches and every historical period – even now – has its witches, so when you realize that thousands of these women who were depicted were criminalized and essentially murdered completely legally, I thought this was something worth looking more into,” said Lerman, a professor in the School of Music, Dance and Theatre at Arizona State University. At the beginning of "Wicked Bodies," the witches enter the performance and walk through the seats in the audience. Photo courtesy Brennan Spark Photography Download Full Image

Inspired by the exhibit, Lerman created and co-choreographed an interactive dance performance based on the true histories and hardships of witches and those accused of being one. "Wicked Bodies" premieres Saturday, Sept. 24, at ASU Gammage. Tickets are on sale now at asugammage.com/wickedbodies.

The story of “Wicked Bodies” follows a group of witches and the people around them while reflecting on issues about women’s bodies as they address the “fear of bodily functions, horror at what knowledge women might possess, disgust at the way women carry on daily existence, and the crumbling of beauty as women age,” Lerman said.

Lerman started building the basis for the story by asking what knowledge we as a society choose to celebrate, erase and even criminalize.

“In the time these depictions were created, it became a frenzy to point fingers and it had nothing to do with being a witch. In fact, you didn’t have to do much to be considered a witch, and yet we had to ask ourselves, ‘If anyone can be a witch, then why are we killing people for being witches?’” she said.

In 2016, Lerman was named the first Institute Professor at the Herberger Institute for Design and the Arts at ASU. She is also a choreographer, performer, writer and public speaker.

She met her “Wicked Bodies” co-choreographer and rehearsal director, Keith Thompson, in 2008 while he was studying under and shadowing Lerman. The two hit it off and have been working on projects together ever since. Thompson is also an accredited dancer, choreographer and the assistant director of the dance program at ASU.

Many other people along the way have helped and supported Lerman throughout her career, including Colleen Jennings-Roggensack, ASU vice president for cultural affairs and executive director of ASU Gammage, who is instrumental in bringing such programming as “Wicked Bodies” to the stage — along with many other artists and performance groups — through the Beyond series.

The two met when Lerman was performing at Dartmouth College while Jennings-Roggensack was the acting director at Hopkins Center for the Arts at Dartmouth.

“I probably wouldn't still be working or have the successes that I do without the support of some people, like Colleen, who have always believed in me and told me to keep going, especially in the face of obstacles,” Lerman said.

The show uses a variety of different mediums to illustrate and convey messages throughout. Performers dance on and off stage while accompanied by vibrant lighting, emotional music, spoken word and projected images and video. 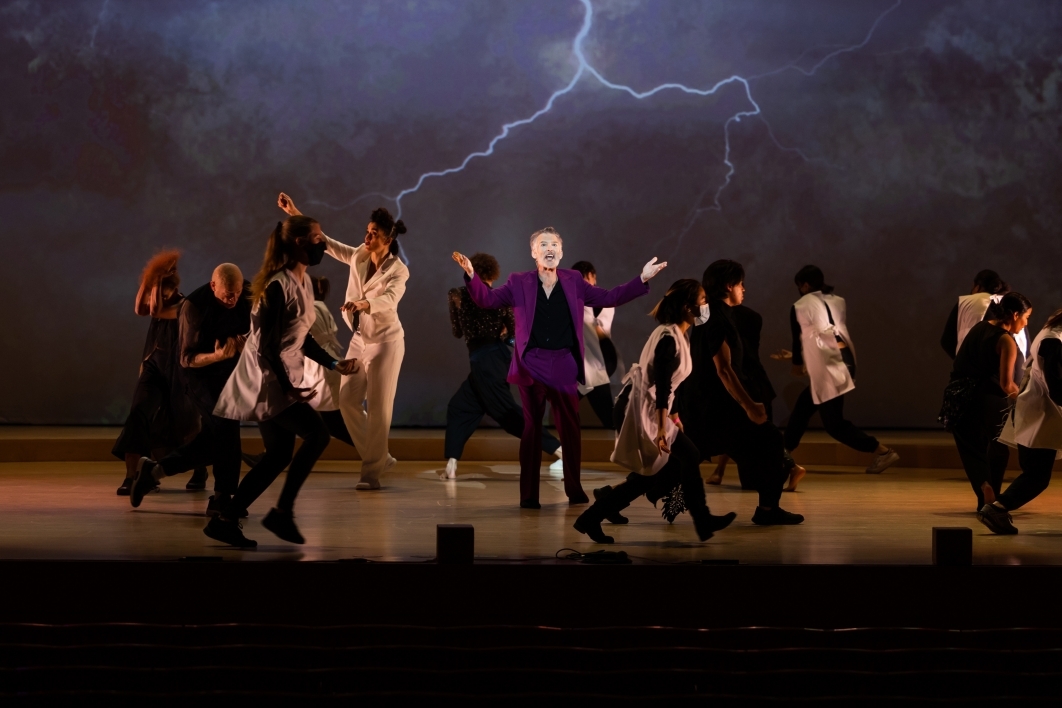 The witches in the Beyond series show "Wicked Bodies" gather on stage during their performance. 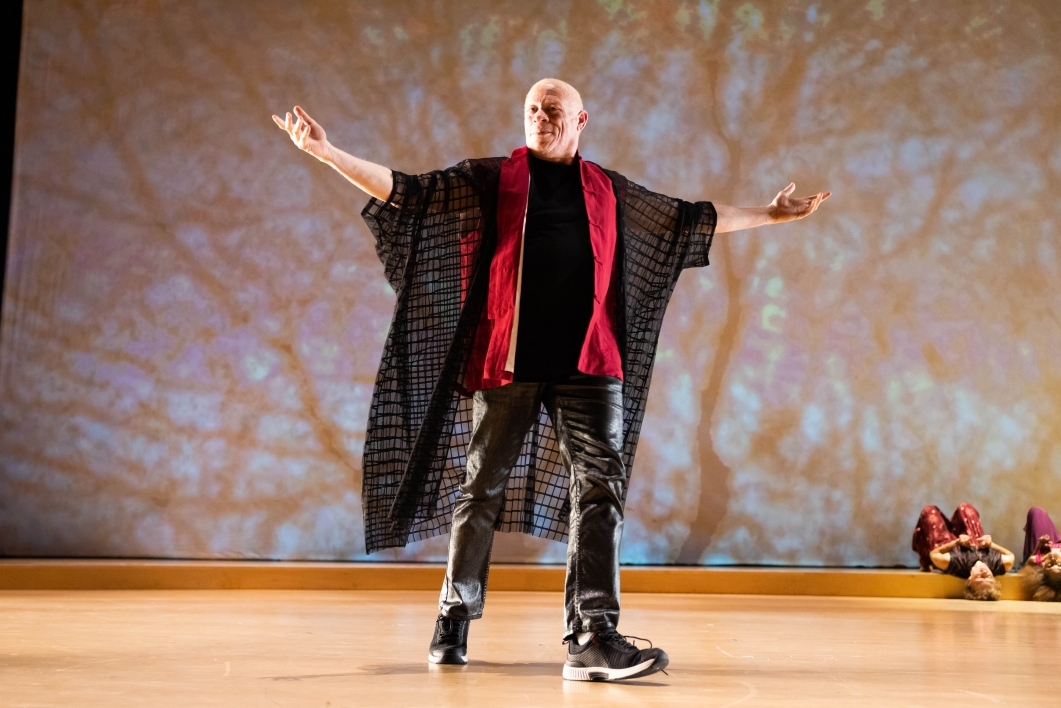 During their performance, the witches in the show interact and dance among the audience members.

"Wicked Bodies" is a performance that encourages audience participation. In the first act, the witches speak and dance with the audience in their small sections that Lerman refers to as “pods.” Local students will also join the performance as witches' apprentices in the show. The witches themselves will engage audience members in conversation and push them to interact and connect with the people around them as well.

This collaborative performance also means that the show changes for every venue. No two performances are exactly the same. The fluid nature and connectivity of the show creates a special and deeply personal experience for both the witches and audience members.

“The idea behind the show is to address the assumptions we have about witches. Who gets to decide what a witch is, what they look like or even who can exist that is completely good or bad?” Thompson said. “The conversation allows you to address the people around you and actually learn about them. It’s learning about humanity and your fellow human beings and finding yourself to be more open than when you started.”

The show starts out with a focus on closeness and human intimacy in the theater, with the dancers performing amongst the seats and aisles with the audience in their pods. As the show progresses into the second act the performers take those same ideas and apply them to the larger picture while tying in lessons within the show as the performers move on stage.

Audience members are asked to think about what burdens they carry with them, both physical and emotional, and the witches encourage them to share those experiences, good and bad, whether they have to do with love, trauma or loss – especially the loss of others, animals or even themselves.

“I like to ask them if there is anything I can help them carry, because I want to take that from them and carry it through into the rest of my performance. It becomes a catharsis for them that they can see and relate our work to how they are feeling and experiencing their own lives,” Thompson said.

He and Lerman hope that the witches can offer themselves as a way for the audience to open up emotionally and intellectually, and also show how witches are still relevant in today’s world and how their stories and hardships are often more universal than people are led to believe.

"Wicked Bodies" puts forth the idea that people should get to control their own stories and how those stories are told and represented in the future. Future generations of witches can see that generational trauma is not the sole message that they receive. The witches also pass down love, healing, body autonomy and other traits to carry on.

“It starts to become about healing and the journey towards forgiveness, especially when you consider the history of women and the small insignificant things that they are criticized for; you start to realize that the way forward can’t be with conflict, but instead human kindness, understanding and the willingness to communicate and empathize with each other,” Thompson said.