ASU business graduate has role in 'Wicked' on Broadway

Gish, who was born in Las Vegas and moved to Bullhead City, Arizona, when he was 11, earned a bachelor’s degree in business management from the W. P. Carey School of Business with honors from Barrett, The Honors College at ASU. 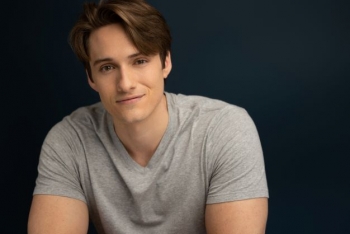 In his Broadway debut, he is currently performing the role of Fiyero in "Wicked" eight times per week at the Gershwin Theatre in New York City.

Gish credits his mother and a childhood friend with encouraging him to pursue singing and performing.

“Culturally, Bullhead City is quite sports-focused. So growing up, I'd always aspired to be an athlete. Sadly, I'm about as coordinated as a newborn calf,” Gish said.

Gish’s love of music and performance led him beyond productions at his alma mater Mohave High School. He appeared as a guest artist with Colorado River Concerts, an organization that brings live concerts and performances to Bullhead City and other Colorado River-area communities. He has performed in national tours of "Beautiful: The Carol King Musical" and "Les Misérables"; with Phoenix Theater Company in "Newsies," "Jersey Boys," "Westside Story," "Daddy Long Legs" and "My Way"; with Hippodrome Theater in "Forever Plaid" and "The Toxic Avenger"; and with Desert Stage Theater in "Shrek: The Musical."

In 2017, Gish released an album titled "So In Love," produced by DW Music at Warner Brothers Music and Oceanway Studios in Nashville, Tennessee. The album made it to the iTunes Top 10 Classical Chart. He promoted the album with West Coast performances in 2017 and in a Las Vegas tour in 2018. He performed with Caesars Palace Concerts at Cleopatra’s Barge on the Las Vegas Strip in 2018.

How does Gish feel about making it to Broadway?

“Broadway has been a dream of mine for over a decade. Words are paltry things to describe what the actualization of that really feels like,” Gish said.

“I have this beautiful moment every night in the 'Wicked' finale in which I watch Elphaba (also called the Wicked Witch of the West) downstage for several moments before we make our final exit, and it gives me a perfect view of the stage, the cast, the audience and the theater. It's rare that I don't have a tear in my eye by the end of it. That being said, Broadway is also a great challenge. There's a much higher level of precision and consistency expected of performers here, and accomplishing that eight times a week is no small feat. It takes a whole lot of sleep, water and Mucinex!”

Gish took time out from his busy schedule to answer a few questions about his journey from small-town Arizona to the Big Apple. Here’s what he had to say.

Question: When did you attend ASU and Barrett Honors College?

Answer: I started in the fall of 2014 and graduated in the spring of 2017. I majored in business management because, coming from such a small town, I didn't feel confident I had what it takes to actually compete at a professional level in performing, so I wanted something to fall back on. Fortunately, I greatly enjoyed studying at W. P. Carey.

My sophomore year, I also started performing at a regional theater in downtown Phoenix, the Phoenix Theatre Company, where I was able to learn the ropes of that world while also going to school. Simultaneously, I started taking extra classes and summer courses at ASU in order to graduate a year early and get to work even sooner.

Q: How did you decide on ASU and Barrett?

A: Many reasons. It's a beautiful campus and well-respected institution, it was close to home, I was lucky enough to get a great scholarship, and it was located near professional theaters where I'd hoped to start working while going to school.

I graduated in 2017 and had the chance to return to perform at Gammage Auditorium as Gerry Goffin with the national tour of "Beautiful: The Carole King Musical" in February 2020. I was honored with the ASU Gammage Rising Star Award, which currently resides on a shelf in my parents' living room. It was an unforgettable evening!

Q: What did you get out of your ASU and Barrett experience?

A: I got much more out of it than I could fit in this interview! I studied under a lot of really outstanding professors. Their courses have helped me tremendously in understanding the business side of performing. For instance, I've drafted a lot of my own concert and touring contracts myself and have helped other friends of mine as well, which I certainly wouldn't be able to do without that knowledge.

Q: How would you describe your performance and singing style?

A: The official genre of my solo album, "So In Love," is called classical crossover. Think Josh Groban-style songs through a more contemporary lens. I've been writing a lot of my own music while touring with these shows and now joining "Wicked," and I can feel my genre shifting a bit, but admittedly I'm still figuring out exactly where it's going. I suppose that's part of the fun of it, and I look forward to releasing some original music soon.

Q: What is the process to get to the point where you are performing on Broadway? Do you need to have a certain number of off-Broadway or regional performances under your belt before you can be cast for a Broadway production? How competitive is it?

A: There's no official requirement for Broadway. It certainly helps to have more experience because producers and creative teams will always seek the safest choice, but they've also often plucked talent from obscurity when the fit is just right. Auditions, work sessions with creatives, callbacks in front of a panel of producers and directors. It's quite a process. The competition is as intense as you can imagine, but I've always had a leg up in that I have an excellent manager, Nyle Brenner, who's done an exceptional job of getting my name out there.

Q: If you were speaking to an ASU Barrett student, what would you tell them?

A: One of the biggest lessons I learned is that what you get out of school is equivalent to what you put in. It sounds cheesy, but it's so true. One can attend the classes, study for tests, get decent grades and land a decent job, but taking the time to foster relationships with professors personally, join the clubs and make lasting connections is what can guarantee an excellent job instead of a decent one.

Q: What advice do you have for a young person who aspires to be a performer, and maybe make it to Broadway?

A: Take every opportunity that knocks. Everyone has to start somewhere, so any and all exposure is paramount. This business is about people far more than talent. I've taken many difficult or inconvenient gigs that didn't pay much because they gave me the chance to foster important connections, and they paid off almost every time. Trust that the grueling work will pay off later.

The Pac-12 Conference released the weekly matchups and site designations for the league's 2022-23 women's basketball season on Thursday. ...

The Pac-12 Conference released the weekly matchups and site designations for the league's 2022-23 women's basketball season on Thursday.