One of the most serious threats to wildlife biodiversity, in addition to the climate crisis, is the illegal killing and trafficking of animals and plants. Despite many laws against the black-market wildlife trade, it is considered to be one of the most lucrative illicit industries in the world.

Animals, especially endangered and threatened species, are often exploited and sold for their pelts or used as medicine, aphrodisiacs, curios, food and spiritual artifacts. 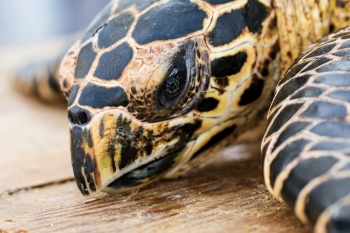 A new ASU study shows during a 30-year period, 95% of poached sea turtles came from two species — green and hawksbill turtles — both of which are listed under the U.S. Endangered Species Act. Also, Southeast Asia and Madagascar emerged as major hot spots for illegal sea turtle take and trade, particularly for critically endangered hawksbills, which are prized in the illicit wildlife trade for their beautiful shells. The East Pacific hawksbill turtle is among the most endangered sea turtle populations. Photo by Lindsay Lauckner Gundlock Download Full Image

In a new study published in “Global Change Biology,” Arizona State University researchers estimate that more than 1.1 million sea turtles have been illegally killed and, in some cases, trafficked between 1990 and 2020. Even with existing laws prohibiting their capture and use, as many as 44,000 sea turtles were exploited each year over the past decade in 65 countries or territories and in 44 of the world’s 58 major sea turtle populations.

Despite the seemingly large number of poached turtles, the study shows that the reported illegal exploitation of sea turtles declined by approximately 28% over the last decade — something that surprised the researchers. They initially expected to see an overall increase in reported poaching.

“The decline over the past decade could be due to increased protective legislation and enhanced conservation efforts, coupled with an increase in awareness of the problem or changing local norms and traditions,” says Kayla Burgher, co-first author of the study and a doctoral student in ASU’s environmental life sciences program in the School of Life Sciences.

In addition to the slight decline, the researchers found that most of the reported illegal exploitation over the past decade occurred in large, stable and genetically diverse sea turtle populations.

Jesse Senko, co-first author of the study and an assistant research professor with the ASU School for the Future of Innovation in Society, says this discovery may be a silver lining to the high number of turtles illegally exploited.

“What this means is that most of these sea turtles came from healthy, low-risk populations, which suggests that, with a few exceptions, current levels of illegal exploitation are likely not having a major detrimental impact on most major sea turtle populations throughout the world’s oceans," Senko says.

Senko adds, however, the results should be cautiously considered.

“Assessing any illegal activity is difficult, and the take and trade of sea turtles is no exception, especially when it becomes organized or connected to crime syndicates. Our assessment also did not include eggs or turtle products, such as bracelets or earrings made from sea turtle shells that could not be easily attributed to individual turtles,” he says. 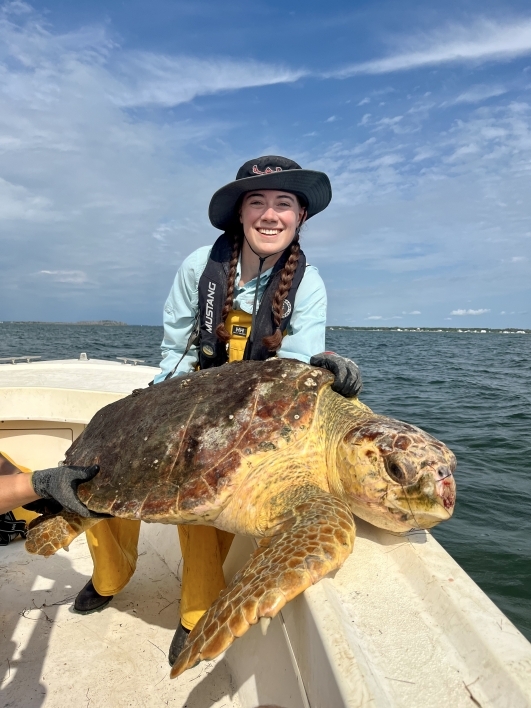 Kayla Burgher, a co-first author of the study and ASU doctoral student, found that the number of reported exploited sea turtles has declined over the last decade. She is pictured here holding a loggerhead turtle in Core Sound, North Carolina, which was captured and released unharmed under NMFS ESA permit no. 21233-04. 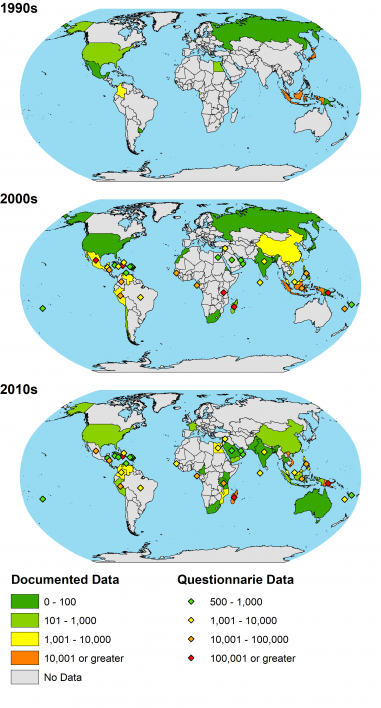 Global maps depict the magnitude of illegal exploitation by country during the 1990s, 2000s and 2010s. Data from the documented literature are shown by colored countries, while data from the in-country expert online questionnaire are shown with the diamond symbols (no questionnaire data were collected for the 1990s).

In the study, the researchers reviewed data from peer-reviewed journal articles, archived media reports, NGO reports and online questionnaires to determine a comprehensive look at existing information on exploited sea turtles. The study revealed additional patterns and trends that may assist in determining conservation management priorities. For example, Vietnam was the most common country of origin for illegal sea turtle trafficking, while China and Japan served as destinations for nearly all trafficked sea turtle products. Similarly, Vietnam to China was the most common trade route across all three decades.

Across the 30-year study period, 95% of poached sea turtles came from two species — green and hawksbill turtles — both of which are listed under the U.S. Endangered Species Act. Also, Southeast Asia and Madagascar emerged as major hot spots for illegal sea turtle take and trade, particularly for critically endangered hawksbills, which are prized in the illicit wildlife trade for their beautiful shells.

"Our assessment is an important foundation for future research and outreach efforts regarding illegal sea turtle exploitation. We believe this study can help conservation practitioners and legislators prioritize conservation efforts and allocate their resources to best help protect sea turtle populations from harmful levels of exploitation worldwide," Burgher says.

The research team says much more needs to be done to sustain global biodiversity.

“Increased support for governments lacking the resources to protect sea turtles is needed, along with support for communities to sustain human well-being in the face of restrictions or bans on sea turtle exploitation. We must develop conservation strategies that benefit both people and turtles,” Senko says.

The ASU School for the Future of Innovation in Society is a unit of the College of Global Futures, within the Julie Ann Wrigley Global Futures Laboratory at ASU.

Sun Devil Volleyball will participate in the Baylor Invitational on Friday and Saturday, hosted by the No. 15 Bears. ... Sun Devil Volleyball will participate in the Baylor Invitational on Friday and Saturday, hosted by the No. 15 Bears.