Helping people isn’t something former Sun Devil Michael White only does when he’s feeling generous; for him, it’s a daily mission.

Having earned a sociology bachelor’s degree in 2011 and a criminal justice master’s degree in 2013, White is now the director of community programs at Hushabye Nursery, a Phoenix nonprofit assisting pregnant women with opioid use disorder. The organization specializes in treating neonatal abstinence syndrome, where a baby experiences opioid withdrawals due to exposure during pregnancy. 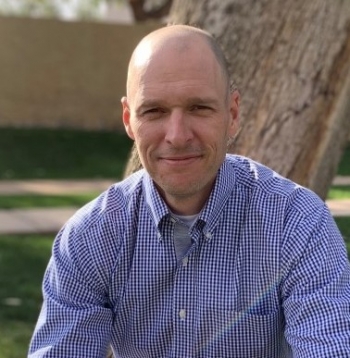 Besides his work at the nursery, White is involved in numerous policy groups. He’s a member of the Harvard Medical School Policy Group, the Georgetown Recovery Policy Collaborative, Gov. Doug Ducey’s Substance Abuse Task Force and is also a technical assistant with the Department of Justice for the Comprehensive Opioid, Stimulant, and Substance Abuse Program grant. When he isn’t strategizing with government leaders to improve opioid treatment, he is educating local hospitals and other institutions on the services available to them.

Throughout his career, White has advocated for Medication-Assisted Treatment (MAT), an effective opioid addiction treatment method, according to the U.S. Department of Health and Human Services. He has helped 14 states integrate the treatment into their correctional facilities so patients can choose it if they wish, and has helped the American Civil Liberties Union and Legal Action Center with several litigations regarding MAT. A big win for White and his colleagues occurred earlier this year when the Department of Justice issued protections for individuals seeking this form of treatment.

White says he loves this work and rates it a 10 out of 10. “It does not feel like work; just helping people,” he says.

White’s journey began as a sociology major at ASU’s T. Denny Sanford School of Social and Family Dynamics, where he wasn’t sure exactly what he wanted to do.

“I knew I wanted to help people, but that was about it,” White says. “I wanted to change the world for people that are usually not cared for or (are) treated poorly.”

White says sociology gave him a crucial foundation of skills such as empathy, active listening and open-mindedness. It has been especially helpful, he says, to understand models of social and human behavior in different settings and groups.

While pursuing his degree, White cultivated his passion through internships. He first interned at a juvenile facility where he interacted with young people navigating the criminal justice system, and then at Head Start, where he learned to work with families and children needing early childhood support. These experiences culminated in a full-time counseling position for an opioid treatment program, where he was able to act as both a nurturing force and an advocate for people struggling with drug use disorders.

After completing his master’s degree in criminal justice from the School of Criminology and Criminal Justice, he felt that significant, systemic change was possible in this field, but was amazed by how many people felt powerless to truly help others.

Nearly 10 years after graduating from ASU, White knows that even one person can have a big impact.

His advice to current students? “Go change the world,” he says. “It's messed up.”

An expanding entry point into a fast-evolving field

Joining the student chapter of the Institute of Industrial and Systems Engineers, or IISE, wasn’t on Jaden Heidbreder’s list of priorities when she began her college studies.Only when Heidbreder was in the same class as the IISE chapter president at the time, who strongly encouraged her to check out the organization, did she decide to attend one of its meetings.She got around to it by the grou...

An expanding entry point into a fast-evolving field

Joining the student chapter of the Institute of Industrial and Systems Engineers, or IISE, wasn’t on Jaden Heidbreder’s list of priorities when she began her college studies.

Only when Heidbreder was in the same class as the IISE chapter president at the time, who strongly encouraged her to check out the organization, did she decide to attend one of its meetings.

She got around to it by the group’s final meeting before the summer break, at the end of her first year of studies in the Ira A. Fulton Schools of Engineering at Arizona State University. But not long after that, Heidbreder would be elected to the chapter’s executive board and as its vice president of creative and web design.

Later came a stint as the group’s marketing manager, which would include overseeing social media activities, leading a redesign of the chapter’s artwork, and helping further develop its brand and promote its activities.

Heidbreder, a third-year industrial engineering major, served as the ASU IISE chapter president for a little more than a year, during which she gained additional experience in organizational management — including involvement in finances, student outreach, professional development and industry networking.

Now three semesters away from graduation, she is reaping the benefits of these edifying efforts beyond her coursework.

“I know that my resume would not look half as good as it does if I hadn’t been able to take advantage of the club’s annual resume reviews and professional development events,” Heidbreder says. “And I probably wouldn’t know anyone in the industry. But now my friends include a lot of industry representatives.”

It’s all about making connections, says Javier Romero, who succeeded Heidbreder as president. In his view, one of the most valuable assets the organization offers members are opportunities to develop communications skills to help them become successful relationship-builders — skills essential to nurturing students’ self-assurance in their potential as future engineers.

“They’re learning how to reach out effectively, and they’re not getting intimidated by talking to senior level people,” says Romero, a senior industrial engineering major. “They’re able to approach people they want to work for or collaborate with in a very confident way.” 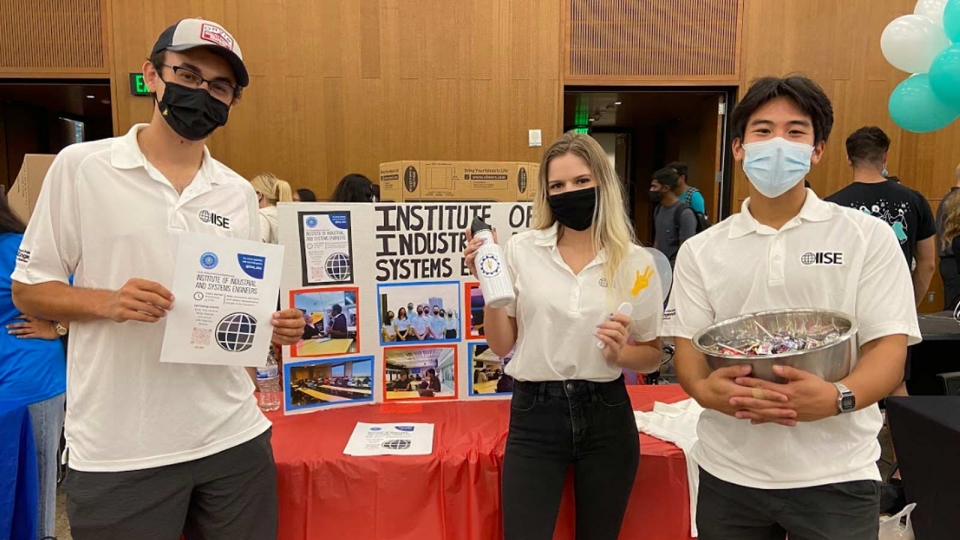 The IISE chapter also focuses on deepening students’ proficiency in problem-solving, the most vital skill in their field, says the chapter’s faculty advisor, Feng Ju, an associate professor in the School of Computing and Augmented Intelligence, one of the seven Fulton Schools.

“Industrial engineering is not a narrowly specialized field. You may have to do problem-solving in manufacturing, and then next solve health care industry problems, and then later help to find logistics solutions,” says Ju, who has served on the leadership team of the Arizona IISE professional chapter.

The ASU IISE student chapter is currently establishing a working relationship with Arizona’s professional chapter that should provide students more opportunities to connect with state chapter members. In addition to networking sessions with company representatives, there are professional development events like LinkedIn workshops and resume reviews and social events, including bowling and student-teacher mixers.

The group has also organized events and activities through which students have learned how engineers in the field are making important contributions to the success of major international companies like Honeywell, the Boeing Company, Mitsubishi UFJ Financial Group, W.L. Gore & Associates, Deloitte and the Walt Disney Company, among others.

The student chapter currently has more than 100 members. But the group’s leaders plan to initiate efforts to expand membership and participation, and do that in large part by offering more connections to professional engineers and the industries that employ them. 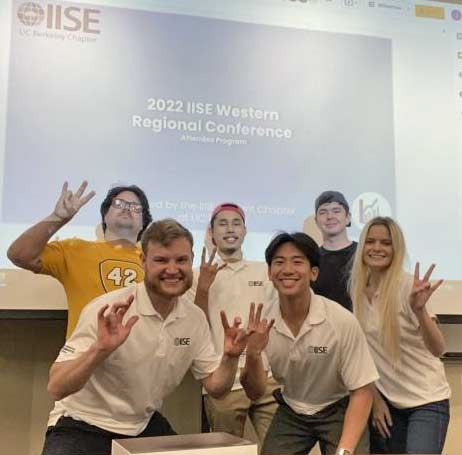 Leaders of the IISE ASU student chapter flash the ASU pitchfork hand sign during their virtual participation in this year’s IISE Western Regional Conference. The group is in the process of establishing a working relationship with the Arizona professional IISE chapter. Photo courtesy the ASU student chapter of the Institute of Industrial and Systems Engineering

Ju emphasizes that the field of industrial and systems engineering overall is evolving in ways that will expand its usefulness and impact across a widening range of technological and societal pursuits.

Work in the field now spans across a variety of growing areas, including materials, information, energy, physical and social sciences, new methods of engineering analytics, evaluation and design, and making use of the increasing capabilities of today’s artificial intelligence and machine learning technologies, all of which have increasing importance in areas like manufacturing and health care.

Those varied developmental trends can make the IISE chapter more relevant to students in other branches of engineering, Ju says.

The group has already drawn interest from students in other Fulton Schools’ degree programs — including engineering management and computer science students — and the chapter is exploring joint ventures with other student organizations, including ASU’s chapters of the Society of Hispanic Professional Engineers and the Society of Women Engineers.

“I feel like there is a broader community being created, and that it will help give our members more meaningful preparation for an engineering career,” Romero says.

“Our chapter is doing better in connecting the dots for students to see how the things they are learning in the classroom translate into the real industrial world,” Ju says, “and how they can use what they learn and experience in our student chapter to build a foundation for their career path.”

More information about the chapter can be found on Instagram @IISE_ASU and at Sundevilsync.