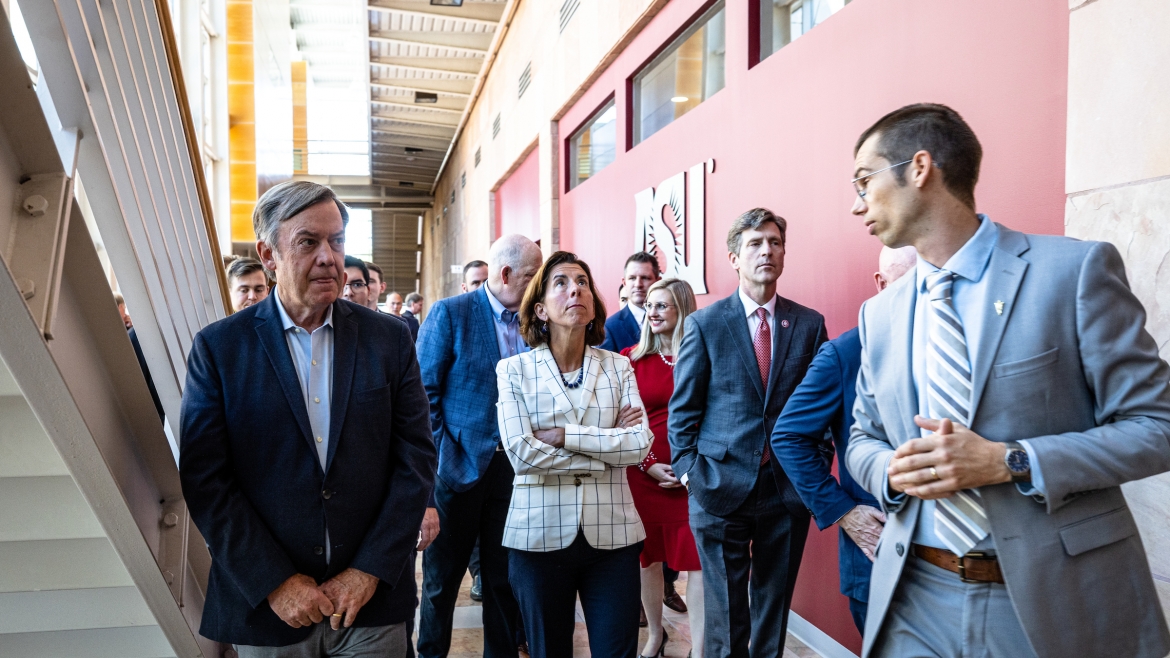 State and federal leaders, led by U.S. Secretary of Commerce Gina Raimondo and U.S. Sen. Mark Kelly and hosted by ASU President Michael Crow, touted the recent passage of the CHIPS and Science Act and got a look at Arizona State University’s MacroTechnology Works facility in Tempe on Tuesday.

The goal of the gathering?

To focus on the work ahead.

Congressional approval of the CHIPS and Science Act delivers $52 billion in funding that will go directly into commercial development of microchips in the United States, but also into research and workforce development.

ASU’s MacroTechnology Works provides an environment where the public and private sectors come together, a model that national and local public policymakers are looking to as a framework for how to advance the industry domestically through CHIPS investment. The facility operates as both a lab and a fab — unique to the microchip research and development space — and is a resource for companies of all sizes.

Joined by Phoenix Mayor Kate Gallego, Tempe Mayor Corey Woods and other Valley and state economic development professionals, Raimondo and Kelly's tour included a look at the workspace of a small startup company, Swift Coat, which is a spinout based on research conducted at ASU that has doubled in size over the past year.

After the tour, Raimondo and Kelly convened a roundtable discussion that included observations from leaders of companies that are working to make the ambitions of the CHIPS and Science Act come to life.

In his opening remarks, Kelly said the CHIPS and Science Act presents an incredible opportunity to the country and to the state of Arizona, and its passage enjoyed bipartisan support.

“Of all of the things I have worked on in the United States Senate over the last year and a half — and there have been a lot of them — this legislation, and this industry and the impact it is going to have, this is the thing I am most proud of.”

Raimondo and Kelly expressed gratitude to those in attendance, including U.S. Rep. Greg Stanton and Gallego, for their support of the CHIPS Act, but they were quick to note that the work is only beginning.

Future challenges include building a workforce to fill the jobs that are coming because growing companies need talent.

Crow said that MacroTechnology Works tenants are required to commit to collaborative research engagements with ASU. As a result, ASU already has a number of partnerships in place to build the workforce needed for the growing microchip industry. 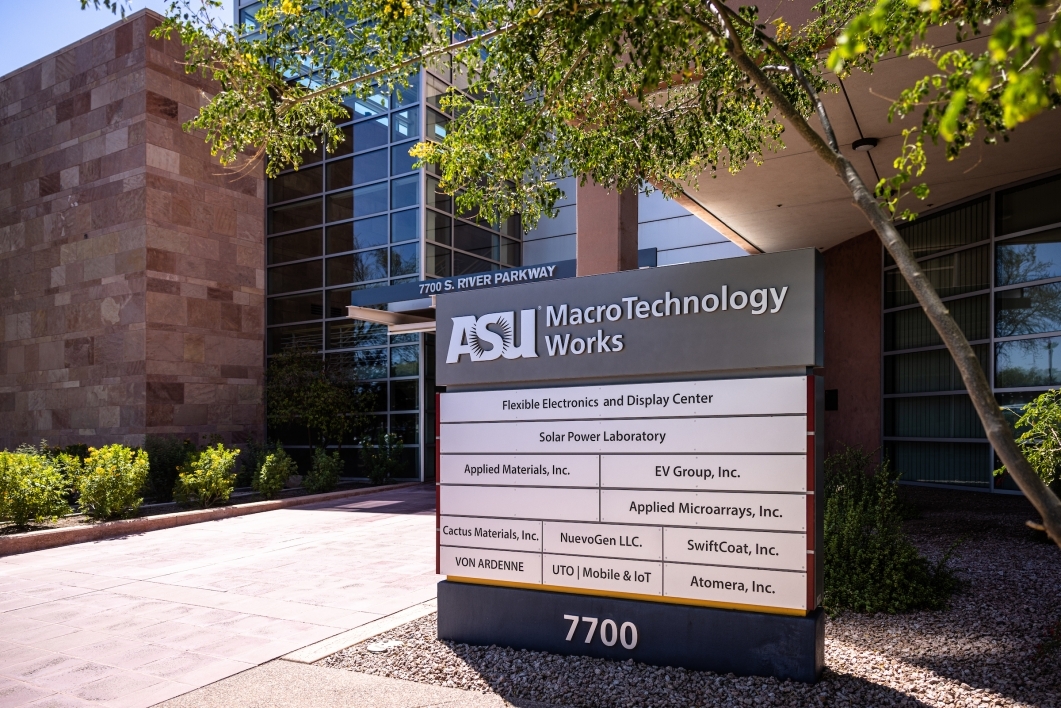 The MacroTechnology Works facility in ASU's Research Park in Tempe is accelerating semiconductor, advanced materials and energy device research in the United States. 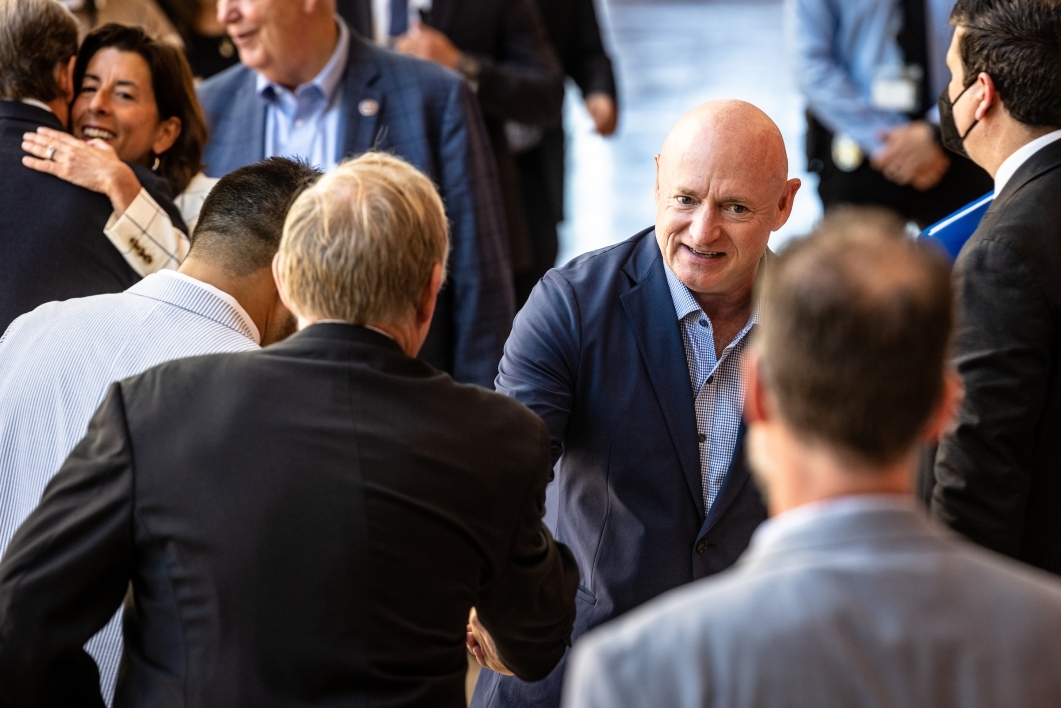 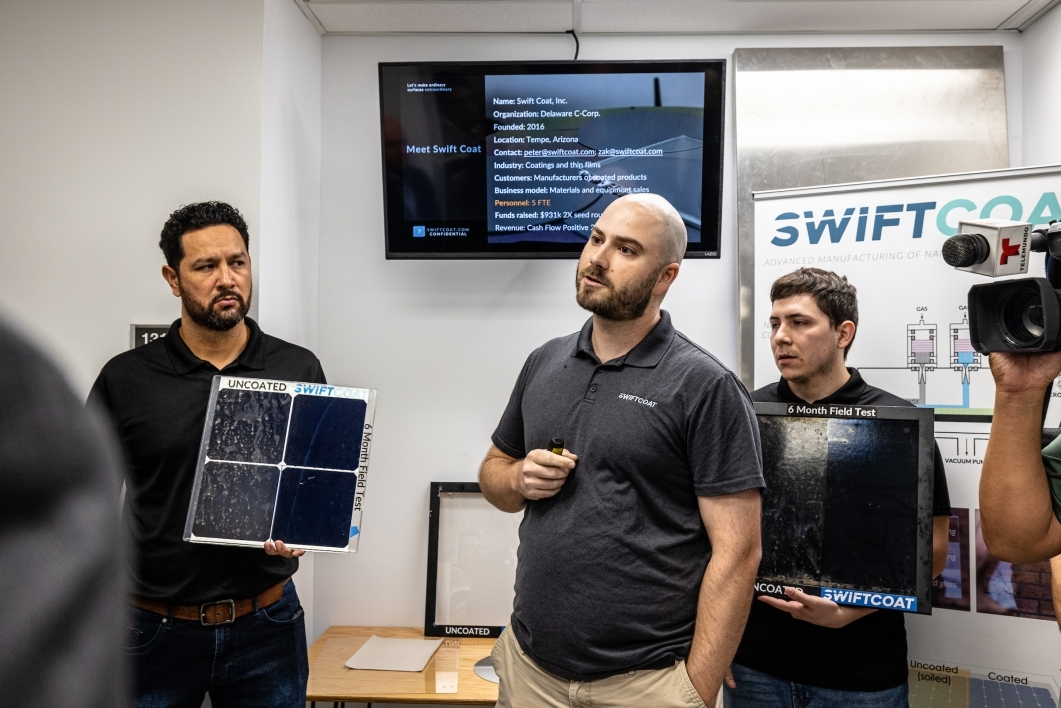 Swift Coat's Peter Firth (center) talks about the company that he and ASU Associate Professor Zachary Holman created, which specializes in nanoparticle coatings. The company conducts its research out of the MacroTechnology Works facility. 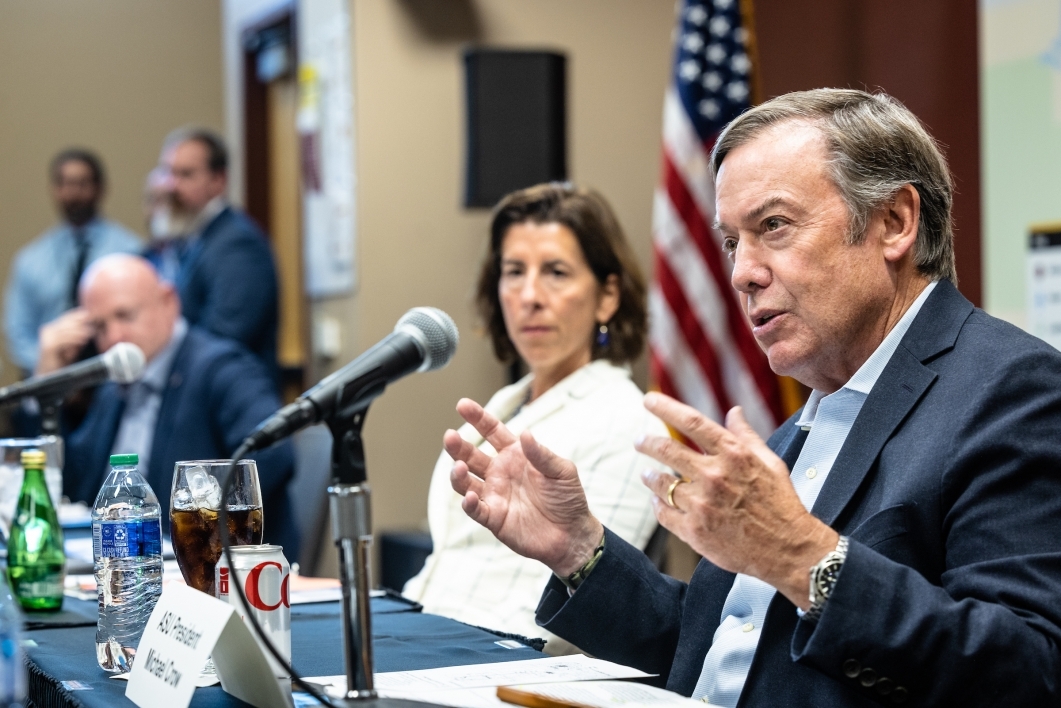 ASU President Michael Crow, along with U.S. Secretary of Commerce Gina Raimondo, speaks during a roundtable discussion following the tour of ASU's MacroTechnology Works on Tuesday. The discussion looked at what comes next, after President Joe Biden signed the CHIPS and Science Act into law earlier in August. 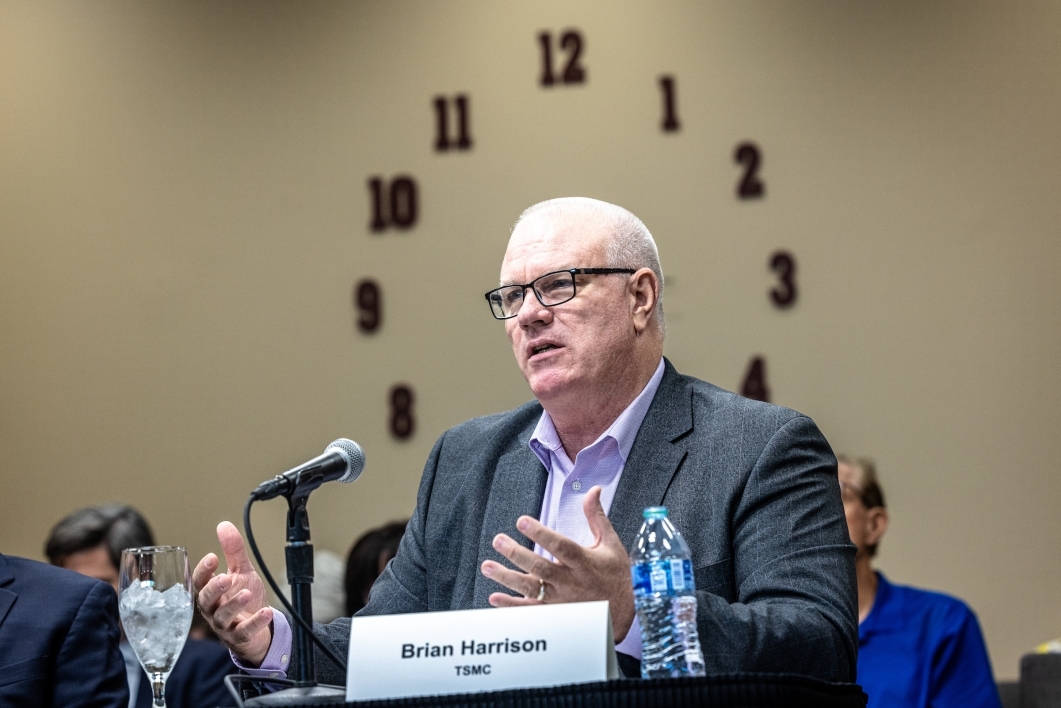 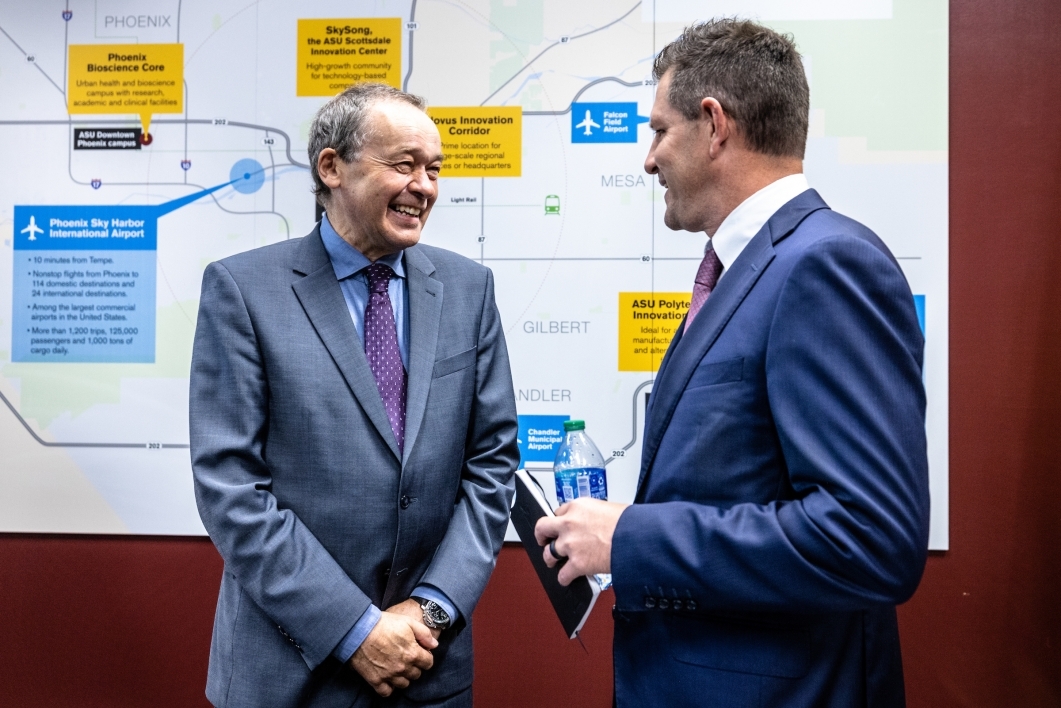 Raimondo said the role ASU is playing and the work being done to develop partnerships and invest in student success is something that “every public university in the country should be doing.”

Other challenges that were discussed included: How will the America build and train the diverse workforce needed to take on the tasks ahead? How can a career in the semiconductor industry be made appealing to a diverse sector of new students and future employees? What is the national competitive environment and how can Arizona create partnerships that will assure the state will shine and be successful in the semiconductor industry of the future?

Raimondo said the Department of Commerce is committed to driving the agenda, building partnerships and tackling all of these challenges.

“It is my mission, my obsession at the Commerce Department to help America compete, to enhance America's competitiveness in the world,” she said. “And enhancing America's competitiveness in the world begins right here in buildings just like this, which is to say the basic research and development money from the government coming together with business — from the biggest to the smallest — with academics, solving the problems of today and tomorrow.”

Both Rawlinson and Harrison spoke to the need to inspire a new generation of STEM students, young people who are inspired by the opportunity to address challenges — from climate change to supply chain to manufacturing prowess — through the innovative application of technology.

“At Lucid, we don’t build cars, we build computers on four wheels,” Rawlinson said, adding that the creative opportunities that come with doing work in that kind of environment is what will help inspire interest in STEM fields, and microelectronics in particular.

Top photo: Arizona State University Associate Professor Zachary Holman (right) leads a tour of the MacroTechnology Works at the ASU Research Park in Tempe on Aug. 30. The tour showcased the university's and the Valley’s commitment to making Arizona a manufacturing hub for microchips. U.S. Sen. Mark Kelly, U.S. Secretary of Commerce Gina Raimondo (center), President Michael Crow (left), U.S. Rep. Greg Stanton (second from right) and other dignitaries talked about the recently signed CHIPS and Science Act of 2022 that will provide more than $50 billion for subsidies to build chip plants in the U.S., with $11 billion to be designated for research and workforce programs. Photo by Charlie Leight/ASU News

Sun Devil Volleyball's month-long road trip opens with a trip to Atlanta this weekend to compete in the Georgia Tech Invitational. ... Sun Devil Volleyball's month-long road trip opens with a trip to Atlanta this weekend to compete in the Georgia Tech Invitational.