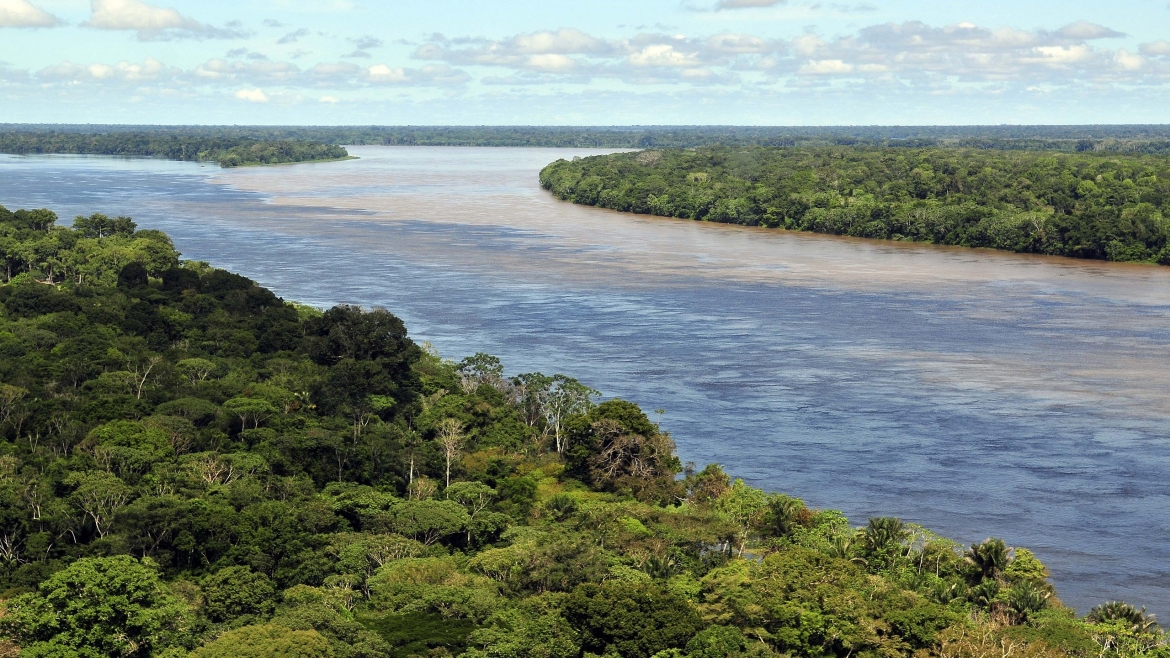 What if nature had legal rights?

Imagine if the Amazon River had legal representation. Or if the Colorado River had a bill of rights. Or if an ecosystem was granted personhood.

These are examples of the Rights of Nature movement, a concept that has been deeply rooted in Indigenous knowledge for millennia and is now gaining traction globally.

The idea: Nature and ecosystems should no longer be regarded as property that can be owned but as entities that have a legal and inalienable right to exist, flourish and defend themselves in courts of law as “rights-bearing entities.”

One example: In 2018, the White Earth Band of Ojibwe, an Indigenous people in Minnesota, recognized the rights of Manoomin (wild rice) to “exist, flourish, regenerate and evolve.” The action, taken in tribal court, was in response to a corporation wanting to use 5 billion gallons of water for the construction of an oil pipeline.

Earlier this year, a court in India declared that the “natural world” should have legal rights on par with humans. Justice Sundarim Srimathy wrote in the opinion that Mother Nature should be granted “all corresponding rights, duties and liabilities of a living person. … The past generations have handed over the ‘Mother Earth’ to us in its pristine glory, and we are morally bound to hand over the same Mother Earth to the next generation.”

These are not isolated examples. Rights of nature laws have been established in more than 30 Indigenous and non-Indigenous communities across the United States, and rights of nature legislation, as well as judicial rulings and constitutional amendments, have been adopted in 24 countries around the world, including Canada, Mexico, New Zealand, Colombia and Ecuador.

Why are these rights needed? How exactly does an ecosystem, a river, even a food source, acquire legal rights? And what protections could these rights create?

Those and other questions were addressed Wednesday during a panel discussion put on by Arizona State University’s Project Humanities in the Labriola National American Indian Data Center on the second floor of Hayden Library on the Tempe campus.

“How often do we think about anything beyond ourselves?” asked panel moderator Alycia de Mesa, Project Humanities’ associate director and a senior Global Futures scholar in the Julie Ann Wrigley Global Futures Laboratory. “If you happen to have come from an Indigenous culture, you probably have thought about it a lot, but if you have not come from an Indigenous culture, there’s a good chance that you have not thought about it very much in terms of what is life, what are rights, who speaks for non-humans altogether?”

Chinonso Anozie, a visiting assistant professor at the Sandra Day O’Connor College of Law, said rights of nature are needed because current environmental laws do not sufficiently protect the environment.

“Let's say, for example, in a community, one particular organization or corporate body is polluting the water,” Anozie said. “And the people who are supposed to bring an action in court are not interested. What should we do? Water does not have any rights of standing before the courts of law.

It might sound strange to, say, give wild rice rights, but there would be greater acceptance of that concept if the notion of personhood was expanded, argued Joni Adamson, President’s Professor of English and environmental humanities at ASU.

Melissa Nelson, a member of the Turtle Mountain Chippewa Band of Indians and a professor of Indigenous sustainability in ASU’s School of Sustainability, said Indigenous tribes are using the movement in tribal courts to protect bodies of water, food, even a sacred mountain. On July 6, the Ponca Tribe in Oklahoma unanimously adopted a statute recognizing the immutable rights of the Arkansas River and South Fork River, which flow through their territory.

“As we often say, the Bureau of Reclamation may have legal authority, but those are spiritually occupied lands and our ancestors have authority there,” Nelson said.

But Anozie said he’s skeptical of how Rights of Nature rulings might hold up in state and federal courts. He noted that in 2019, voters in Toledo, Ohio, passed the "Lake Erie Bill of Rights" law during a special election. But the law, which would have elevated the rights of the community and its natural environment over rights claimed by corporations, was struck down by a federal judge in 2020.

“In the United States, you see this growing advocacy for advancing the rights to nature or giving legal personhood to bodies of water, but it has been met with a lot of resistance,” Anozie said. “Because this is Western civilization, most people do not really believe that or do not understand why it’s necessary for us to have that.

“And with the legislative gridlock in Congress, it’s easier for a camel to pass through the eye of a needle than to have a constitutional amendment granting the rights of nature. That’s how hard it is.”

“There are disparities, so it’s going to be a hard thing to do going forward,” he said. “But I take faith in the environmental justice movement. I believe there’s light at the end of the tunnel and we should keep pushing.”

In Nelson's mind, it's simple: Nature has to be protected from those who are supposeed to protect it.

"We wouldn't have the need for a Rights of Nature movement if humans were more responsible," she said. "Beause it's really humans who are creating the havoc with the extraction mentality that is destroying the natural world."

Top photo: Aerial view of the Amazon rainforest, near Manaus, the capital of the Brazilian state of Amazonas. Photo by Neil Palmer (CIAT), courtesy of Wikimedia Commons

A team of planetary scientists, including Arizona State University Associate Professor Michael Line, have detected carbon dioxide in the atmosphere of a gas giant exoplanet with the James Webb Space Telescope (JWST).The discovery demonstrates the long-awaited capabilities of JWST to observe the atmospheres of planets outside our solar system, revealing their composition and formation histories. ... 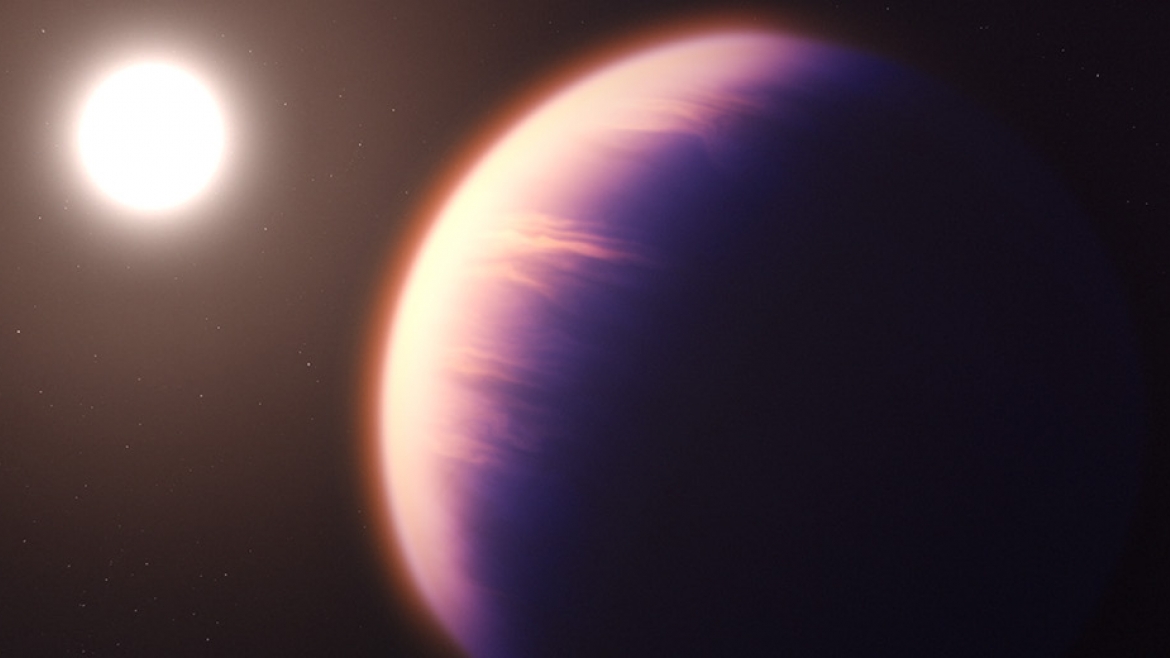 A team of planetary scientists, including Arizona State University Associate Professor Michael Line, have detected carbon dioxide in the atmosphere of a gas giant exoplanet with the James Webb Space Telescope (JWST).

The discovery demonstrates the long-awaited capabilities of JWST to observe the atmospheres of planets outside our solar system, revealing their composition and formation histories. These results open the door to the possibility of learning about the composition of smaller rocky planets that are thought to also have carbon dioxide in their atmospheres.

The results of their findings have been accepted in Nature, titled “Identification of Carbon Dioxide in an Exoplanet Atmosphere.” This is the first accepted publication detailing exoplanet observations with JWST.

The gas giant exoplanet WASP-39 b was discovered in 2011 and orbits a star similar to our sun but 700 light years away. It has a mass approximately that of Saturn and it takes only four days to complete one orbit of its star, making it extremely hot, about 1,400 degrees Celsius. WASP-39b and other transiting exoplanets will allow researchers to examine the atmospheres of these worlds. A transit is when a planet passes between a star and the observer causing a slight dimming of the starlight.

For the study, Line, who is an associate professor in the School of Earth and Space Exploration, and the team used JWST’s Near-Infrared Spectrograph (NIRSpec) to make the observations of the planet in different wavelengths, or colors, of light as it passed in front of its host star. These observations, also known as a transit spectrum, allowed the team of researchers to determine exactly what the planet’s atmosphere is made of. 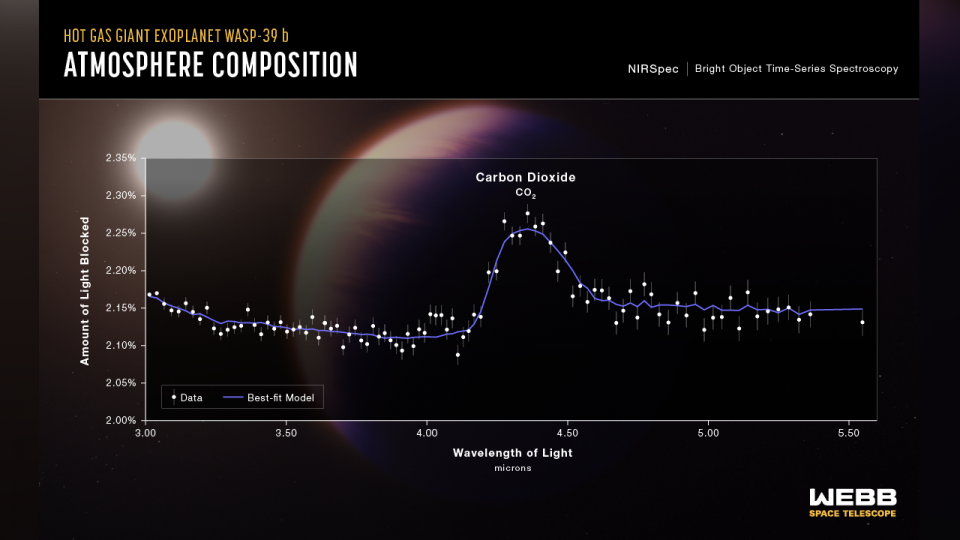 A transmission spectrum of the hot gas giant exoplanet WASP-39 b captured by Webb’s Near-Infrared Spectrograph (NIRSpec) on July 10 reveals the first definitive evidence for carbon dioxide in a planet outside the solar system. This is the first detailed transmission spectrum ever captured that covers wavelengths between 3 and 5.5 microns. Chart courtesy NASA, ESA, CSA, Leah Hustak (STScI), Joseph Olmsted (STScI)

“I felt like a kid in a candy store when I first saw this spectrum. The fact that we can see unambiguous bumps and wiggles – point to them and say, 'Hey, that’s carbon dioxide, hey, that’s water vapor, whoa, here’s this other bump and I don’t know what it is!' — suggests enormous potential for discovery in the worlds beyond our solar system. It truly is a game changer,” Line said.

Understanding the composition of a planet’s atmosphere is important because it tells us something about the origin of the planet and how it evolved.

“Carbon dioxide molecules are sensitive tracers of the story of planet formation,” Line said. “By measuring this carbon dioxide feature, we can determine how much solid (carbon and oxygen rich ices) versus how much gaseous (hydrogen and helium) material was used to form this gas giant planet. In the coming decade, JWST will make this measurement for a variety of planets, providing insight into the details of how planets form and the uniqueness of our own solar system.”

The NIRSpec prism observation of WASP-39 b is just one part of a larger investigation that includes observations of this planet using multiple instruments on board JWST, as well as observations of two other transiting planets. The investigation, which is part of the Early Release Science program, was designed to provide the exoplanet research community with robust JWST data as soon as possible.

“The goal is to analyze the Early Release Science observations quickly and develop open-source tools for the science community to use,” said Vivien Parmentier of Oxford University, co-author of the study. “This enables contributions from all over the world and ensures that the best possible science will come out of the coming decades of observations.”

Line, along with NASA Hubble Postdoctoral Fellow Luis Welbanks and graduate student Lindsey Wiser, both in the School of Earth and Space Exploration, are leading the theoretical interpretations of the data arising from the Early Release Science program.

“This is a once in a lifetime opportunity,” Welbanks said. “For the first time in the history of the field, hundreds of people around the world are working together to learn as much as we can from these precious observations.”

“This is just the beginning. We have many more datasets to analyze from this program — and several others — over the next months and years,” Line said. “I’m still trying to process in my head that we are finally obtaining data from JWST. I thought I would have seen this data as a graduate student a decade ago. The wait was worth it."