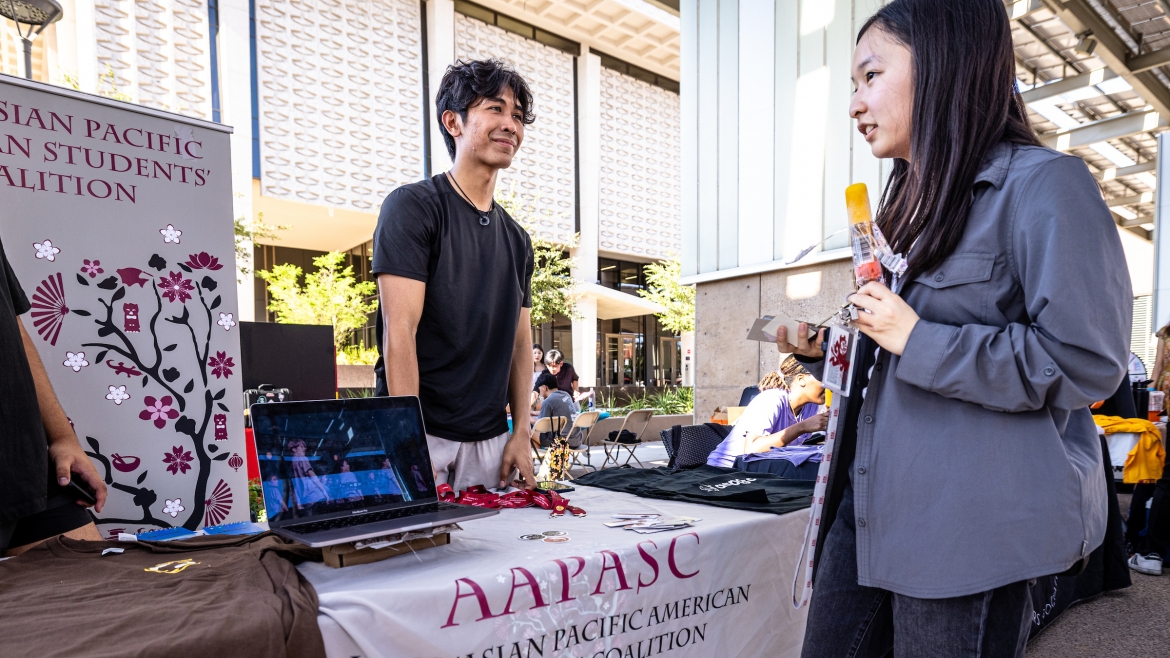 Variety of events welcome students back to ASU for fall 2022

This week, as incoming students began their college journeys at Arizona State University and returning students came back for the fall semester, there was no shortage of events to welcome them to campus.

ASU's Welcome Week events are designed to help students succeed, connect with new people and make the most of their Sun Devil experience.

Take a look at some of the events from each campus. First-year students R.J. Ramos (left), Libbi Crago and Diego Lara listen to academic success advice during the Solera Experience on Monday at ASU West. Solera is a three-day interactive program for all incoming first-year and transfer students to the West campus to help them navigate and succeed at ASU. 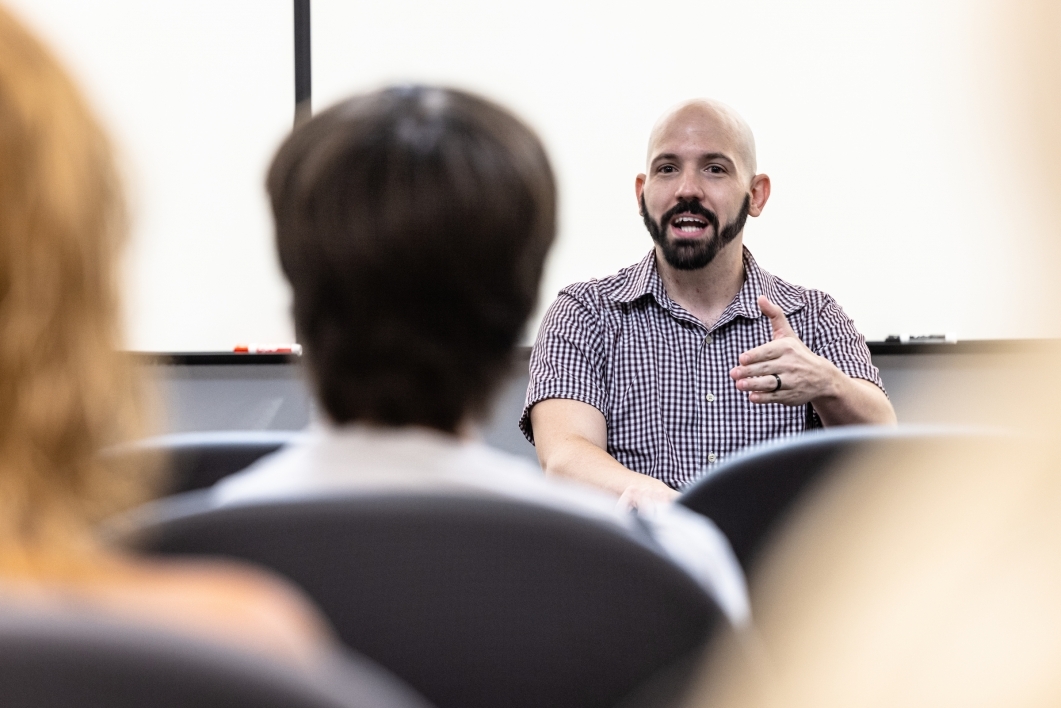 Ken Kunkel, an instructor in New College's Social and Behavioral Sciences, talks to incoming students about how to develop strong communication skills during the Solera Experience. 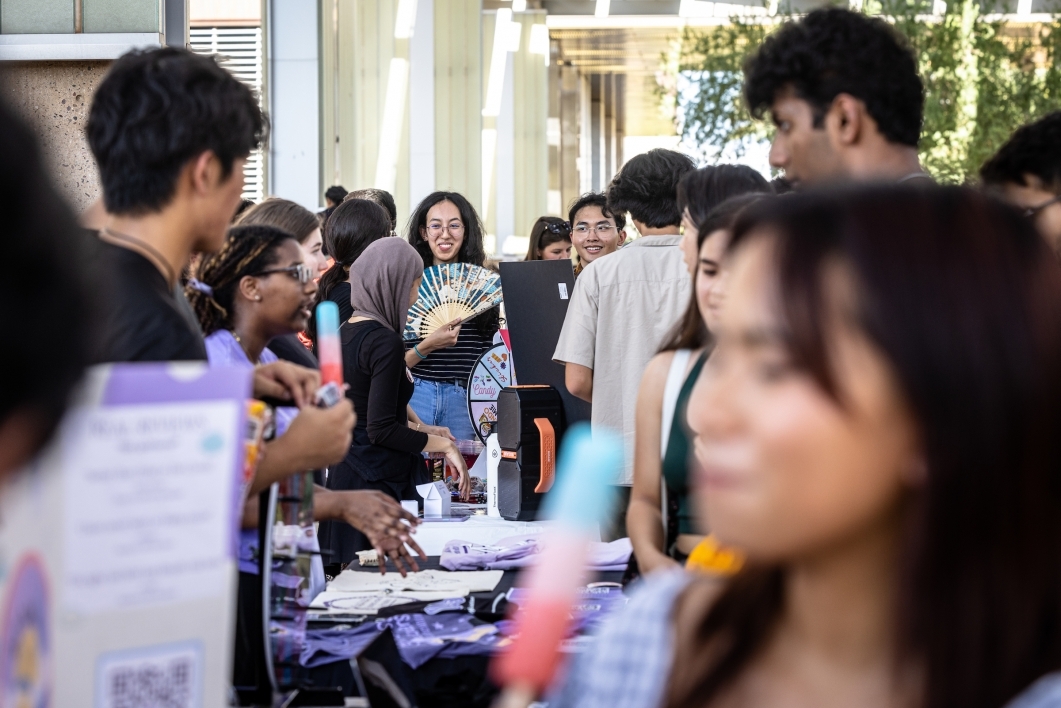 Culture@ASU held its annual Culture Kickoff on Tuesday outside the Memorial Union on the Tempe campus. The two-hour event attracted hundreds of people to tables and displays from culturally based student coalitions, inviting everyone to explore their identity, promote inclusion and celebrate their cultural expression. 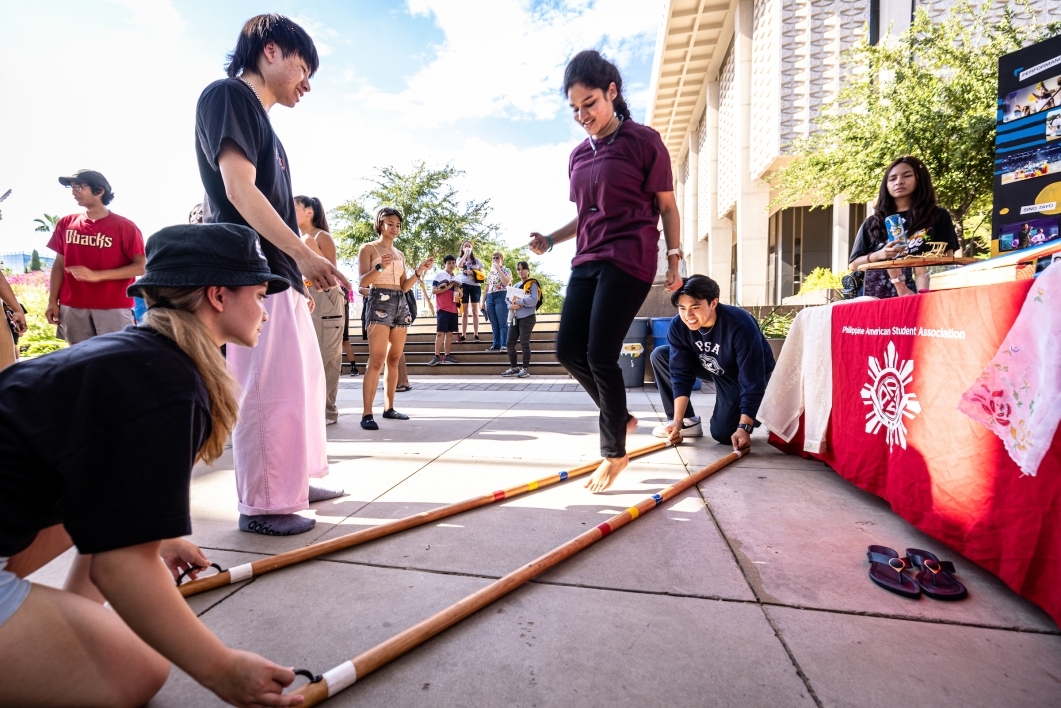 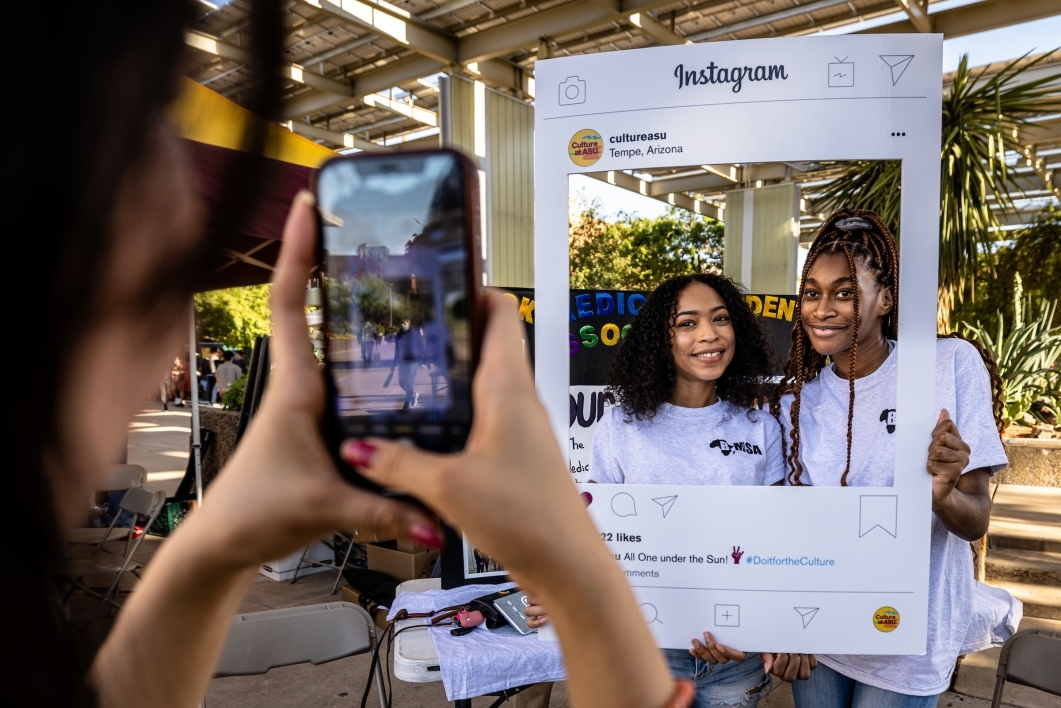 Fourth-year biomedical science students Shabathya Williams (left) and Destiny Ogbeama pose for an Instagram picture during Culture Kickoff. The two are representatives of the Black Medical Students Association on campus. 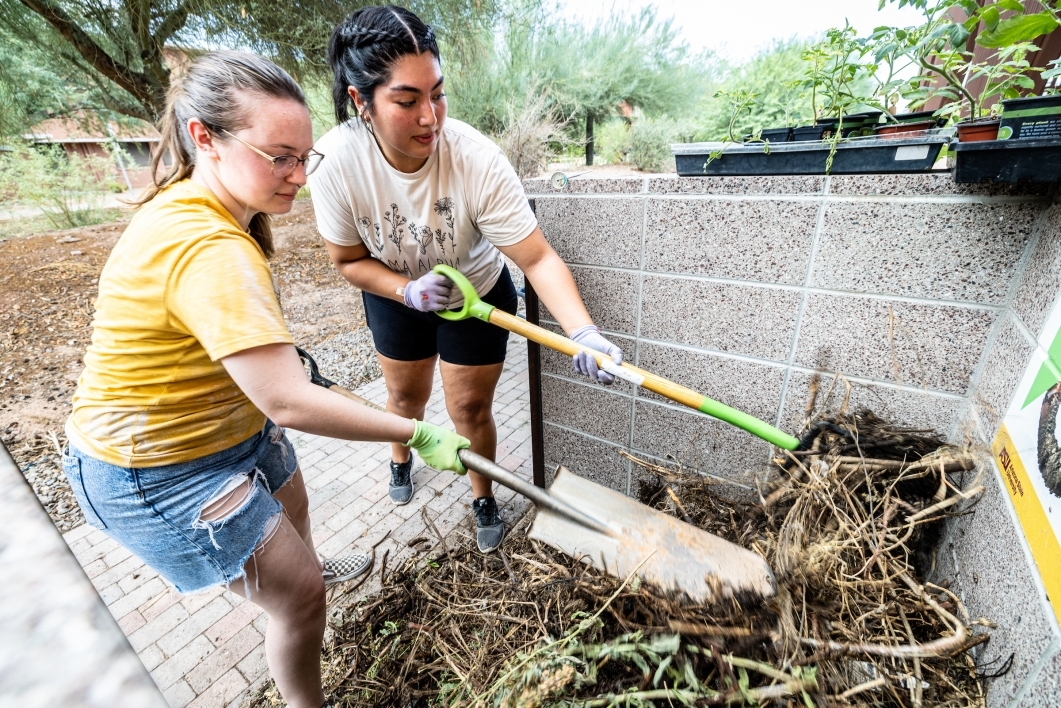 Fourth-year global agribusiness students Zoie Sherman (left) and Kimberly Aranda Fausto mix up a compost pile during the Day of Service on Wednesday at the Garden Commons on the Polytechnic campus. The Changemaker Central event gave students an opportunity to volunteer in a variety of positions around the campus for the day. 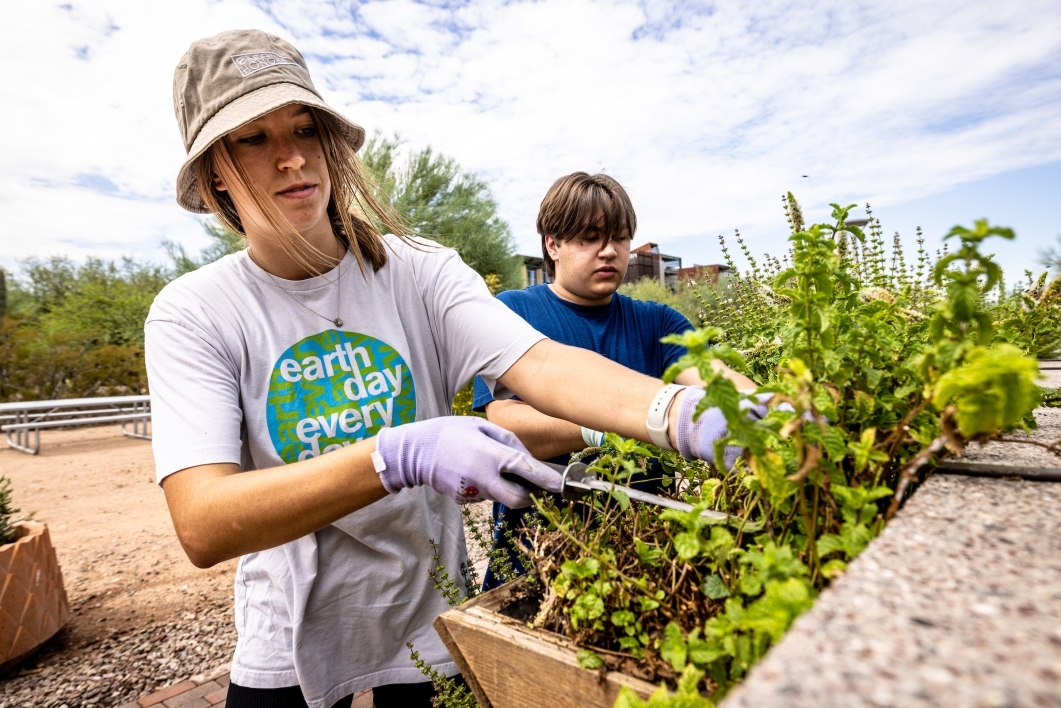 Siblings Madelynne and Owen Greathouse clear a flowerbed of mint during the Day of Service at the Polytechnic campus. Madelynne is a graduate student in sustainability solutions, and Owen is a first-year student in business communications. Alondra Ceja, an applied biological sciences and pre-veterinary first-year student pulls the flowering top off a large basil plant during the Day of Service at the Garden Commons on the Polytechnic campus. Thunderbird graduate student Viral Kundhadia, an international student from India, fills out an application with Laura Guzman, the HR coordinator with GEN Korean BBQ House, during the employment fair held Wednesday at the Downtown Phoenix campus. Around 200 students spoke to recruiters at the part-time job fair sponsored by ASU’s Career and Professional Development Services. The gates to Sun Devil Stadium opened at 6:30 p.m. and here they came.They wore gold Sun Devil first-year T-shirts and quickly walked down the aisles to get their seats on the west side of the stadium, facing the stage. They were loud and boisterous, and you would have thought they were getting ready to party.In a sense, they were.Sun Devil Welcome is not just an introduction to incoming students ... 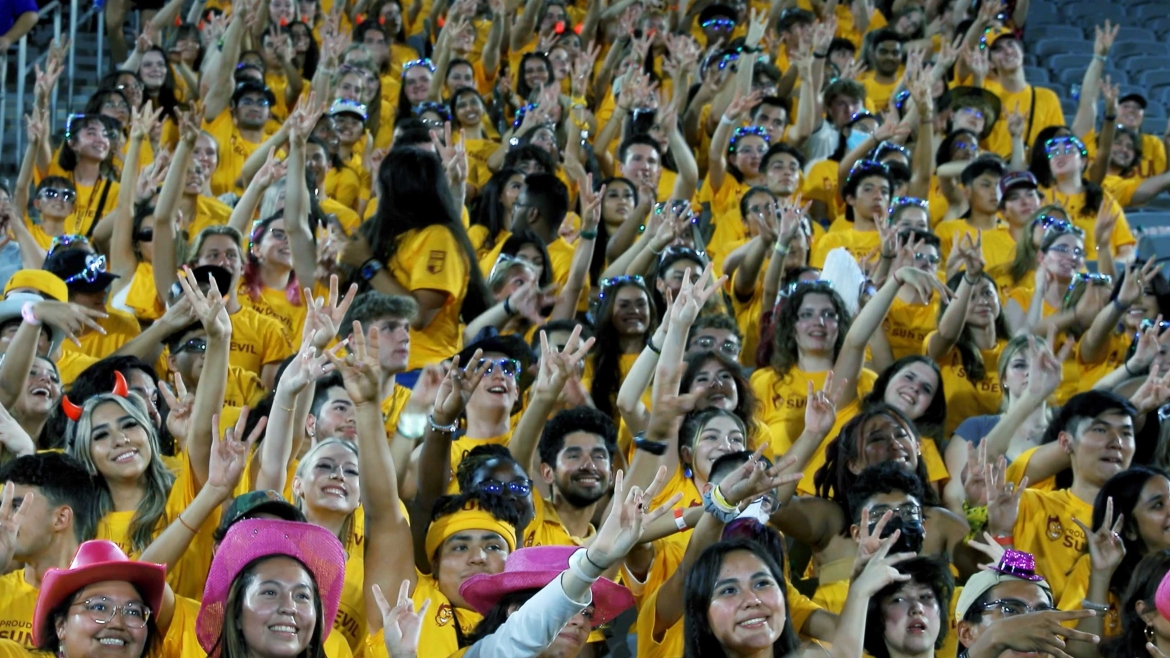 The gates to Sun Devil Stadium opened at 6:30 p.m. and here they came.

They wore gold Sun Devil first-year T-shirts and quickly walked down the aisles to get their seats on the west side of the stadium, facing the stage. They were loud and boisterous, and you would have thought they were getting ready to party.

In a sense, they were.

Sun Devil Welcome is not just an introduction to incoming students about what it means to be a Sun Devil. It’s a loud and proud celebration, full of sights and sounds and, on Tuesday, was followed by a concert by the alternative rock band Wallows.

The music started blaring from the loudspeakers at 6:28 p.m. It was 101 degrees but that didn’t seem to bother a soul. By 6:45 p.m., the sections directly in front of the stage were nearly full, and if you didn’t know any better you might have thought an ASU football game was about to break out.

Talk about setting a mood.

“There are so many people,” one student said as he headed to his seat. “I can’t believe this.”

A few minutes before 7 p.m., the lights situated on the east end of the field began flashing. A video about ASU played on the large screens, extolling, through the voices of leaders, faculty and students, the virtues of the university.

Then, after students stood and swayed their arms back and forth to Rascal Flatts’ "Life Is A Highway," members of the Delta Sigma Theta Sorority performed a dance, Saturday’s Echo from the Buttes event was promoted (where students will paint the “A” on Tempe Butte white), and athletes from some of ASU’s 26 varsity sports invited students to attend games and introduced highlights from the past several seasons of Sun Devil athletics.

Every few minutes, host Brian Askins, a fourth-year student majoring in elementary education, interviewed new students. One group of three students took part in a trivia contest and had to answer this question: How many years in a row has ASU been named No. 1 in innovation by U.S. News and World Report?

The choices: Five, six or seven.

The answer: Seven. (They got it right.)

The night also included a dance number from the Bollywood Fusion dance team Andaaz; students’ tweets were featured on a big screen at the south end of the stadium; and remarks from ASU’s four campus student body presidents were given.

Just after 8 p.m., ASU President Michael Crow and Provost Nancy Gonzalez took the stage, and students from each college were asked to stand up and make some noise.

Crow, in what he termed the “serious part of the show,” asked students to think about why they came to ASU, what their objective is and what kind of person they want to be.

As music once again blasted from the loudspeakers, members of ASU’s Spirit Squad and Sun Devil Marching band made their entrance. The lights went down, the noise went up and Sparky appeared on the video screens, marching through Tempe on the way to Sun Devil Stadium. The band then taught the first-year students some game-night traditions, including the Pitchfork sign and the words to the fight song.

At 8:45 p.m., as fireworks exploded into the sky, the stage emptied. The concert was about to begin. So is the school year.