Winners can earn investment funds to advance their companies

Up to $50,000 in seed investments is available for faculty who recently started a company to commercialize Arizona State University-owned inventions during the fourth annual Skysong Innovations Startup Challenge.

The annual pitch event is accepting applications through Aug. 31. Up to six finalists will be selected following a pitch event in November to receive $25,000 in convertible notes. The winner will receive an additional $25,000. 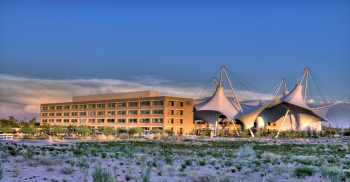 Skysong Innovations is based at the ASU, Scottsdale Innovation Center in south Scottsdale. Download Full Image

“This exciting annual event showcases the cutting-edge technologies being developed within ASU labs and commercialized through job-creating ASU startups,” said Charlie Lewis, vice president of venture development and physical sciences at Skysong Innovations. “The Startup Challenge utilizes outside venture capitalists and entrepreneurs to select the companies most worthy of investment amongst a highly competitive pool of applicants.”

To participate in the competition, the company must have signed a license agreement or option agreement with pre-negotiated license terms with Skysong Innovations between July 1, 2021, and Aug. 31, 2022. Skysong Innovations is ASU’s specialized technology commercialization organization. It helps translate research into real-world impact by protecting innovative technologies developed in ASU labs and negotiating licensing deals with commercial partners. Those commercial partners, which range from new companies spun out of ASU to large Fortune 100 enterprises, then advance such technologies into product development with the goal of bringing new solutions to the marketplace.

The 2021 Startup Challenge grand-prize winner was GenexGen Inc., which was co-founded by Samira Kiani and won $50,000. The company, selected by a panel of judges out of 12 entries, develops epigenetic-based immunosuppressants that supercharge other gene therapies and help to combat cancer and autoimmune diseases. Kiani was formerly an assistant professor in the School of Biological and Health Systems Engineering at ASU.

"The Skysong Innovations challenge win was a great boost to our fledgling company at a time that we needed it the most,” Kiani said. “It brought in further validation, as well as resources to enable the company to push the operation and R&D forward. We are very grateful for this opportunity."

The following companies were finalists in the 2021 competition, and each received a $25,000 convertible note.

Digital learning and economic advancement are inextricably linked. That’s why Arizona State University is using advanced technology with pedagogical tools to chart new pathways for learners of all ages, transforming and expanding the university's reach.These tools are needed to help Arizona and the nation lead – not follow – the rapid transformation of digital learning, workforce development... 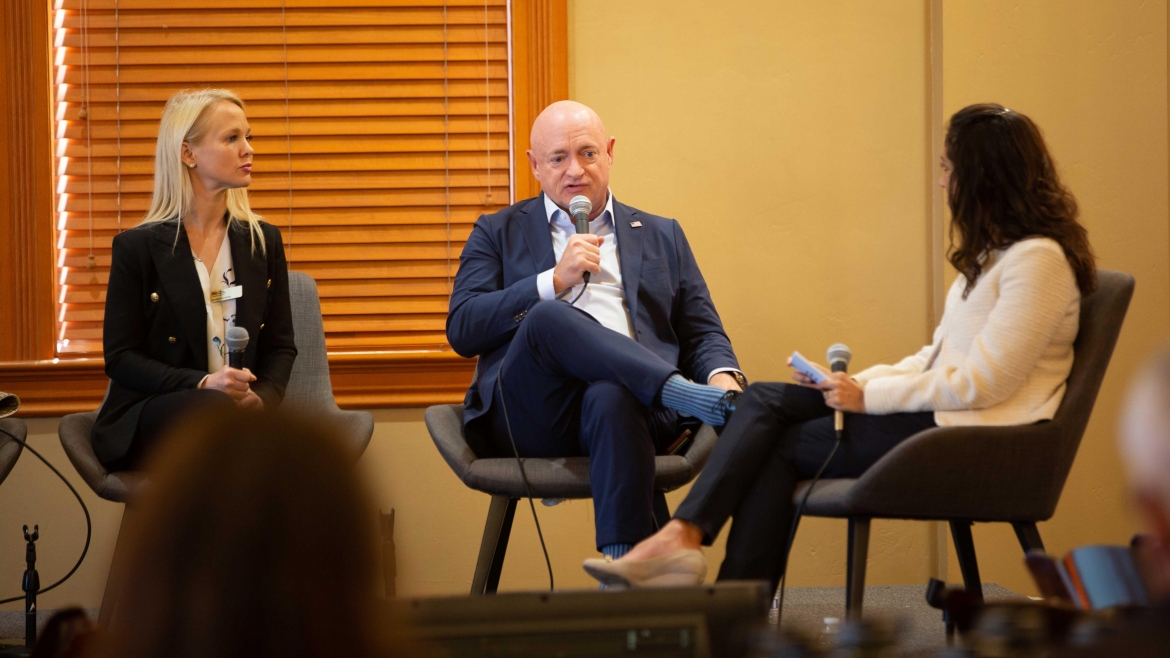 Digital learning and economic advancement are inextricably linked. That’s why Arizona State University is using advanced technology with pedagogical tools to chart new pathways for learners of all ages, transforming and expanding the university's reach.

These tools are needed to help Arizona and the nation lead – not follow – the rapid transformation of digital learning, workforce development and military readiness.

That was the theme of discussion at the sixth annual Congressional Conference on Aug. 16 at Old Main on the Tempe campus, titled “Advancing Innovation and Access in Digital Learning.” The daylong event showcases the many ways in which the digital world has already changed the way we live and learn, and determined who can participate in a rapidly shifting economy.

The event featured panels and attendees that included members of the Arizona Senate, Congress, academic leaders and industry experts.

“Our affiliations with government and private industry are key to our ability to bring greater opportunity to the people of our state,” said Sally C. Morton, executive vice president of ASU’s Knowledge Enterprise. Knowledge Enterprise supports research across ASU, a university with an annual research expenditure of $673 million. “That is why we are so excited to have so many of Arizona’s leaders of government and commerce with us today.” 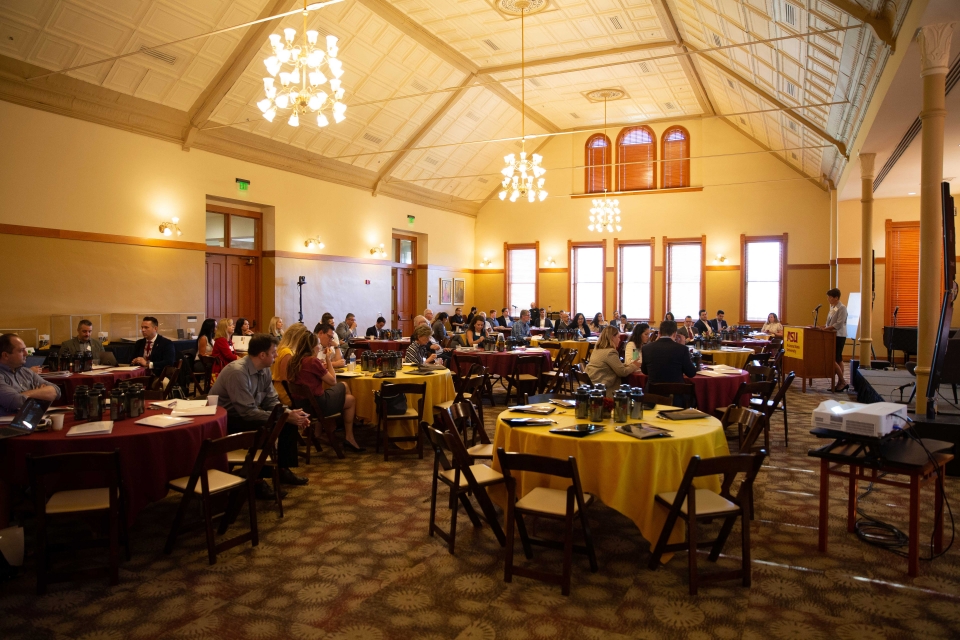 'Digital Enablement and the Future of Higher Education'

ASU and universities throughout the nation should think about students in a much wider scope than in the past, said panelists who spoke at the panel titled "Digital Enablement and the Future of Higher Education."

The 18- to 22-year-old students are usually the ones front-and-present on college campuses, but there are millions of others — nontraditional, lifelong, military — in the workforce who now populate higher education. Digital technology is starting to allow universities the capability to teach them, but now it needs to be done at scale.

“Consumer needs and demands are changing the needs of education,” deLaski said. “We need to offer a degree in a stepladder approach and lead the way in an innovative approach.” The recent passage of the CHIPS and Science Act is a historic investment to surge production of American-made semiconductors and is tied to the nation’s economic and national security. It will have an especially big impact in Arizona. Southern Maricopa County is home to several chipmakers, and the new bill means large investments in facilities and mass education of this new workforce.

“I look at the CHIPS Act as the biggest piece of legislation in the time I’ve been in office,” Kelly said. "It’s transformative, and we need this capability in Arizona. It’s exciting.” 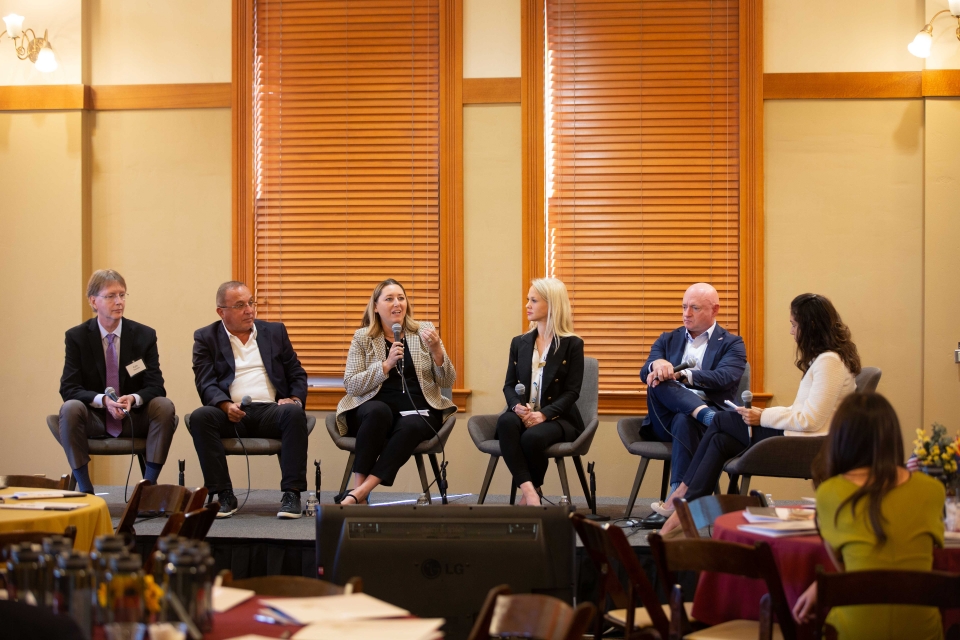 The importance of a socially impactful university

Higher education in the United States is archaic and generations of students have wasted millions of dollars in Pell Grants and left college deeply disappointed or in debt, said ASU President Michael M. Crow, who gave a keynote address to a crowd of approximately 100 people during the conference.

“We have made unbelievable investments in human capital, but they’re poorly executed,” he said. “The goal is to build a university that is quick, agile, egalitarian, socially impactful and takes responsibility for outcomes in the community.”

Crow was quick to point out that ASU is that university and is making the country a better place because it educates at scale to fulfill the nation’s needs and conducts research that is meaningful.

“Being a national service university means you’re not going to build something that is small, rigid and exclusive,” Crow said. “That works for private colleges and narrow-scope institutions, but it’s not what we want. So the only way to get there, which is the spirit of this conference, is to advance all that we have achieved.”

During the pandemic, Crow said ASU never slowed down and was fully operational and engaged. In the last year, Crow said, the university produced 50 new online degrees and launched several key facilities and capital projects. This includes the Rob and Melani Walton Center for Planetary Health, the ASU California Center at the Herald Examiner Building in downtown Los Angeles, the Thunderbird School of Global Management building in downtown Phoenix, the Media and Immersive eXperience (MIX) Center in Mesa, and the Health Futures Center, which is the home of the Mayo Clinic and ASU Alliance for Health Care in northeast Phoenix.

“We have a deep commitment to the success of Arizona,” Crow said. 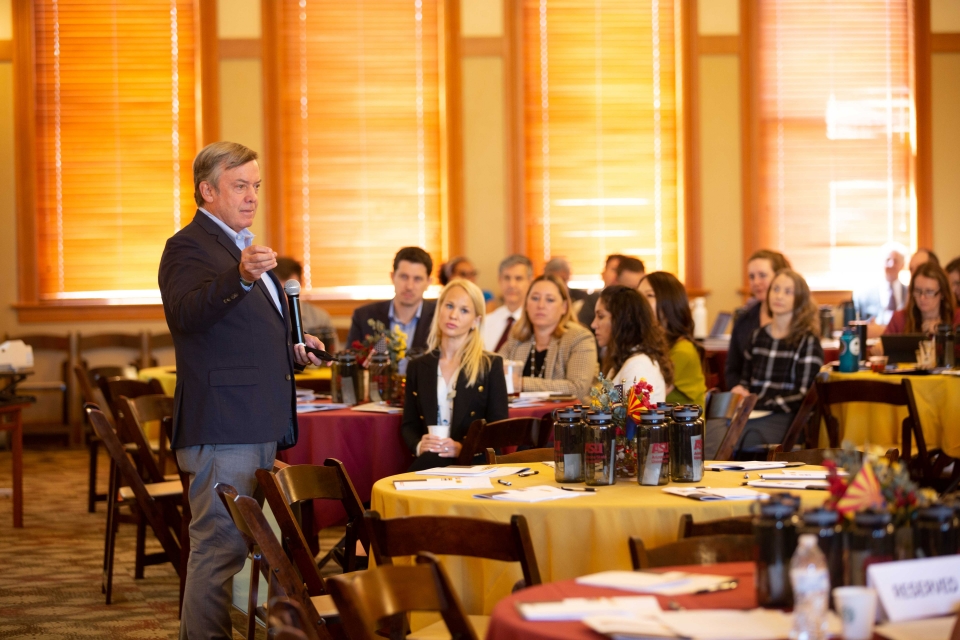 There’s a nationwide “digital divide” when it comes to delivery and equity of internet services, and it’s only getting wider, according to panelists at the Congressional Conference who talked about how to bridge this divide.

They said it’s getting wider because people need more access to the internet than ever before, and that was underscored with the pandemic when it came to jobs, education and delivery of mental and health services.

Wilde said that approximately 1 million people in Arizona don’t have access to the internet. The panel agreed that it’s an opportune time to address this issue and narrow the gap by making the necessary investments in broadband so that everyone has equal access to technology, education and opportunity.

“COVID-19 shone a light on a lot of insecurities in Indian Country and made us realize the system isn’t working,” Moore said. “We now have the opportunity to rebuild the system. We’re at a great place to figure this out.” 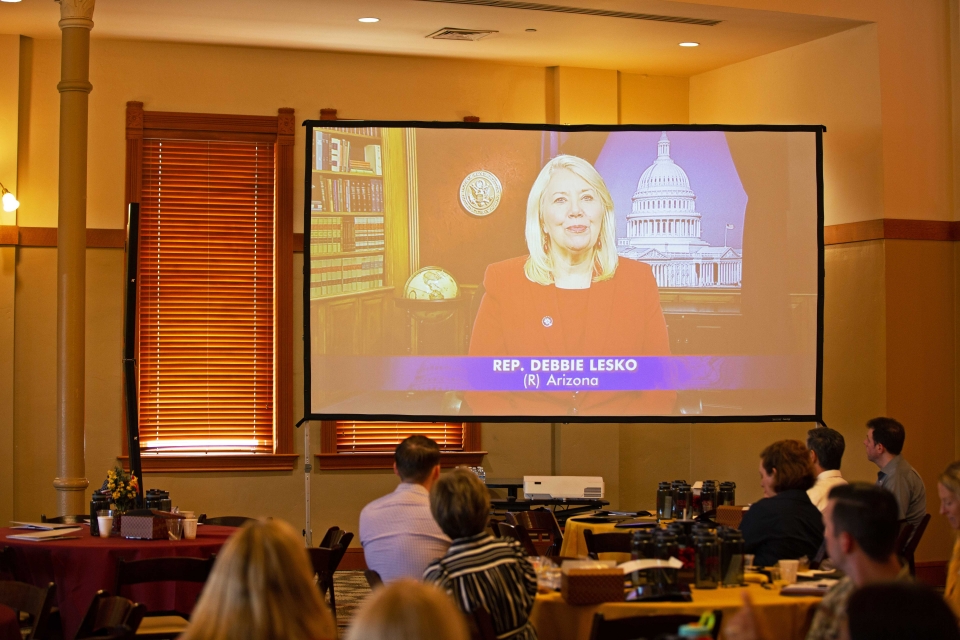 U.S. Rep. Debbie Lesko, from Arizona’s 8th Congressional District, spoke during a video introduction for the "Bridging the Digital Divide" panel at the Congressional Conference on Aug. 16.

Investing in our infrastructure

The new law aspires to give every American — including those in rural communities and tribal communities — access to reliable high-speed internet through a historic investment in broadband infrastructure deployment. Additionally, she said it will help the country become more competitive, bolster education and health care services, and create a wealth of new jobs.

Following passage of the infrastructure law, the Federal Communications Commission established the Affordable Connectivity Program using the funding Sinema helped secure to assist Arizonans in accessing affordable internet. The program provides eligible families $30 a month toward their internet bills and $75 a month toward internet service in tribal areas. Arizonans can apply at GetInternet.gov. 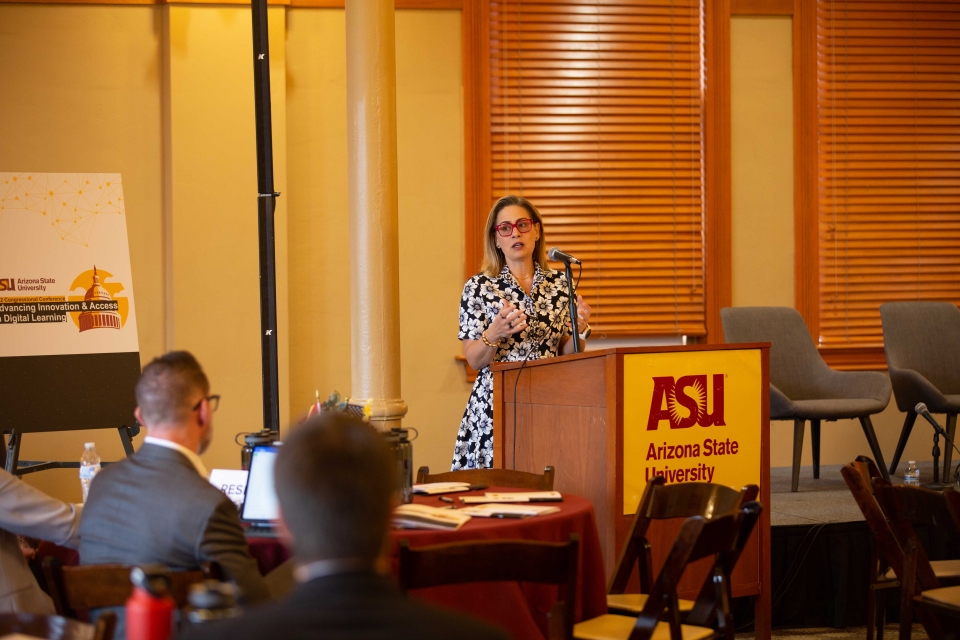 U.S. Sen. Kyrsten Sinema speaks to attendees at the 2022 Congressional Conference on the Tempe campus.

Technology has transformed both our world and national security. The speed at which events can alter global relationships has vastly accelerated, and ASU is doing all that it can to ensure that our military is receiving quality education at scale.

Chris Howard, a graduate of the U.S. Air Force Academy and executive vice president and chief operating officer of ASU Public Enterprise, led a distinguished group of military and education experts in a panel that talked about how military education is complex, competitive, technical, strategic and dynamic in nature.

Shaw said when he started in the military, his unit had one computer, which took up almost an entire desk. Now almost every soldier is “simultaneously operating computers.”

“It dramatically expands the need for education both horizontally and vertically,” Shaw said.