When she first started at Arizona State University, Lezxandra Saguid's passion was music therapy. While waiting for entrance into the program, she decided to pursue another interest and went for a psychology degree. At first, she wasn't sure which direction to take, but eventually found that psychology was the perfect field to connect with her interests in music and the arts.

During her time in the Emerging Minds Lab, where researchers investigate how infants and young children learn about the world around them, Saguid bridged all her interests into one discipline: researching creativity development. Today, after graduating with her degree in psychology, she serves as project lead at the lab. 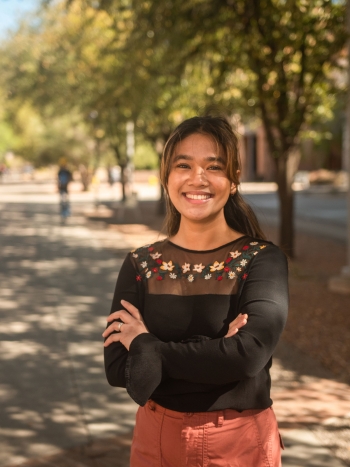 “I just think that every person is creative in their own way, whether they realize it or not,” said Saguid, adding, “A lot of times, creativity is encapsulated by music or art, but it can also affect our daily lives in the way we problem-solve, the way we invent things or innovate.”

Saguid's musical passion pushed her interests toward how individuals can create music or become creative in general. She wanted to research how music is utilized in order to make a difference in people’s lives.

“Music just has that cultural impact on everyone. We listen to music, and we share experiences,” she said.

After deciding to pursue psychology, Saguid began researching what she could do with her degree and found herself browsing the labs in the Department of Psychology for research that aligned with her focus. She came across the Emerging Minds Lab in the fall of 2019, but applications had closed already.

Undeterred, she emailed the lab manager and said, “I really want to be in this lab; how do I make this happen?”

The next semester she applied and was accepted.

The Emerging Minds Lab is led by Assistant Professor Kelsey Lucca and investigates a variety of topics within early cognitive development, such as social cognition, decision-making, problem-solving, communication and reasoning.

“We are a team of researchers at Arizona State University investigating how infants and young children learn about the world around them. Our primary research focus is in understanding how children’s early curiosity supports their thinking and reasoning, and what role the social and cultural environment plays in shaping early learning,” said Lucca.

Saguid was able to start her own project on creativity and mentor other student researchers in the lab.

“Since it was a brand-new lab, I was able to be part of the process in every step of the research journey. It was really interesting, and I felt like not many students who go into research get to experience the whole process from start to finish,” said Saguid. “When I went into being a research assistant in the Emerging Minds lab, I didn't realize how much I was actually putting into real-life research. I really thought that I was just going to be on the computer, coding or typing out reports the entire time. Instead, I was actually making stimuli for actual research that was going to be published.”

This led to Saguid's aspiration to work for Disney or Pixar as a user experience researcher.

“I believe that user experience and UX design works hand-in-hand with developmental psychology research. This experience has positioned me so uniquely that I’m really excited to see where my user experience journey takes me,” said Saguid.

RELATED: Explore the Emerging Minds Lab on Instagram or on its research site.

Saguid used her time in the Emerging Minds Lab to conduct an independent project on creativity in children. Her project examined whether creativity plays a role in how children explore and learn about the world around them.

“Lex was one of the first students to join the Emerging Minds Lab when we opened in the 2019–20 academic year. Lex has always been interested in trying to figure out ways to promote young children’s creativity. One of the challenges in identifying how to support children’s creativity is coming up with effective ways to measure creativity — since creativity looks different on everyone,” said Lucca, adding, “In this study, Lex is collaborating with other researchers in the lab to measure different types of creativity in young children (for example, both verbal and non-verbal expressions of creativity), along with children’s curiosity, vocabulary and ... executive functioning skills.”

“Over the years, it’s been so fun to see the development of Lex’s own creativity, as she has been spearheading our lab’s partnership with Psych-for-Life and designing interactive video modules for families designed to promote children’s creativity and early learning,” said Lucca.

Editor's note: ASU News is highlighting some of its notable incoming students for fall 2022.Although incoming Arizona State University student Abigail Campbell grew up in Phoenix, one of the top five U.S. cities in population size, she says she prefers the more intimate space that ASU's West campus offers, where she will major in medical studies within the College of Health Solutions.Campbell gr... 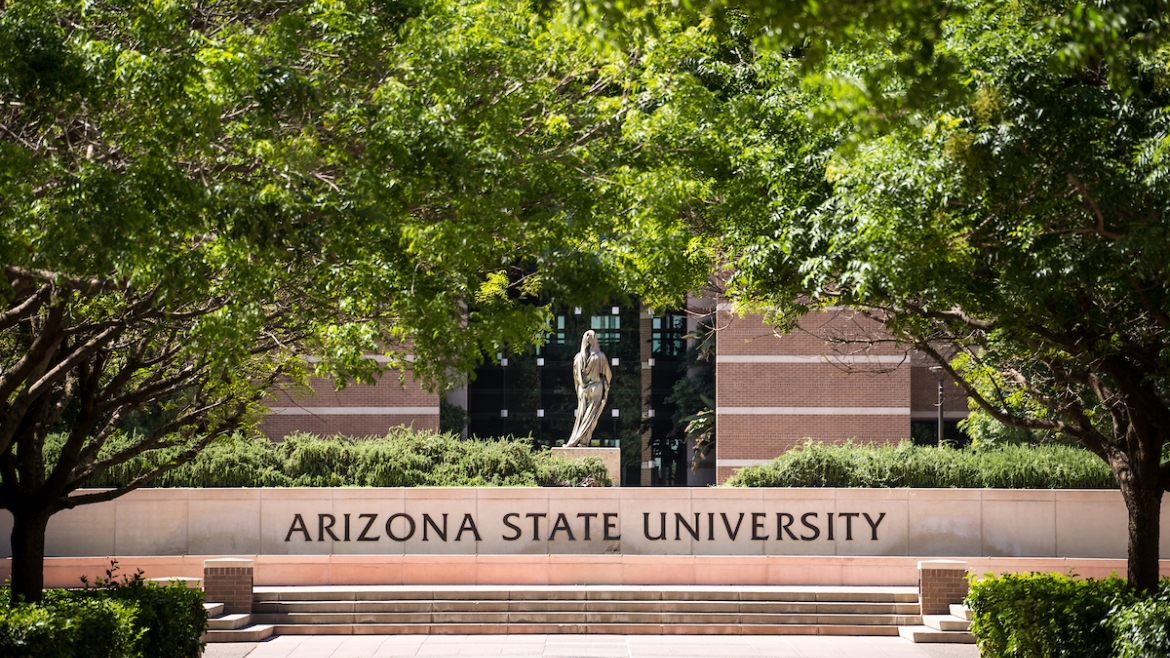 Editor's note: ASU News is highlighting some of its notable incoming students for fall 2022.

Although incoming Arizona State University student Abigail Campbell grew up in Phoenix, one of the top five U.S. cities in population size, she says she prefers the more intimate space that ASU's West campus offers, where she will major in medical studies within the College of Health Solutions.

Campbell graduated from Sandra Day O’Connor High School at the top of her class and is a first-generation U.S. college student, whose parents immigrated from Romania. Campbell said that while medical studies will be new to her, caregiving runs in the family.

Her mom ran a care facility for seniors where Campbell would often play Yahtzee and other games with residents. Then, later in her mom’s career, she became a hospice nurse. Campbell credits her mom as her own inspiration to serve others.

“It was maybe what sparked my interest in the medical field,” she said. “Sometimes I think about it and I'm like, ‘How do you do it?’ Like visiting all these people and just seeing them at the end of life.”

Here she answer some questions about her journey to ASU. 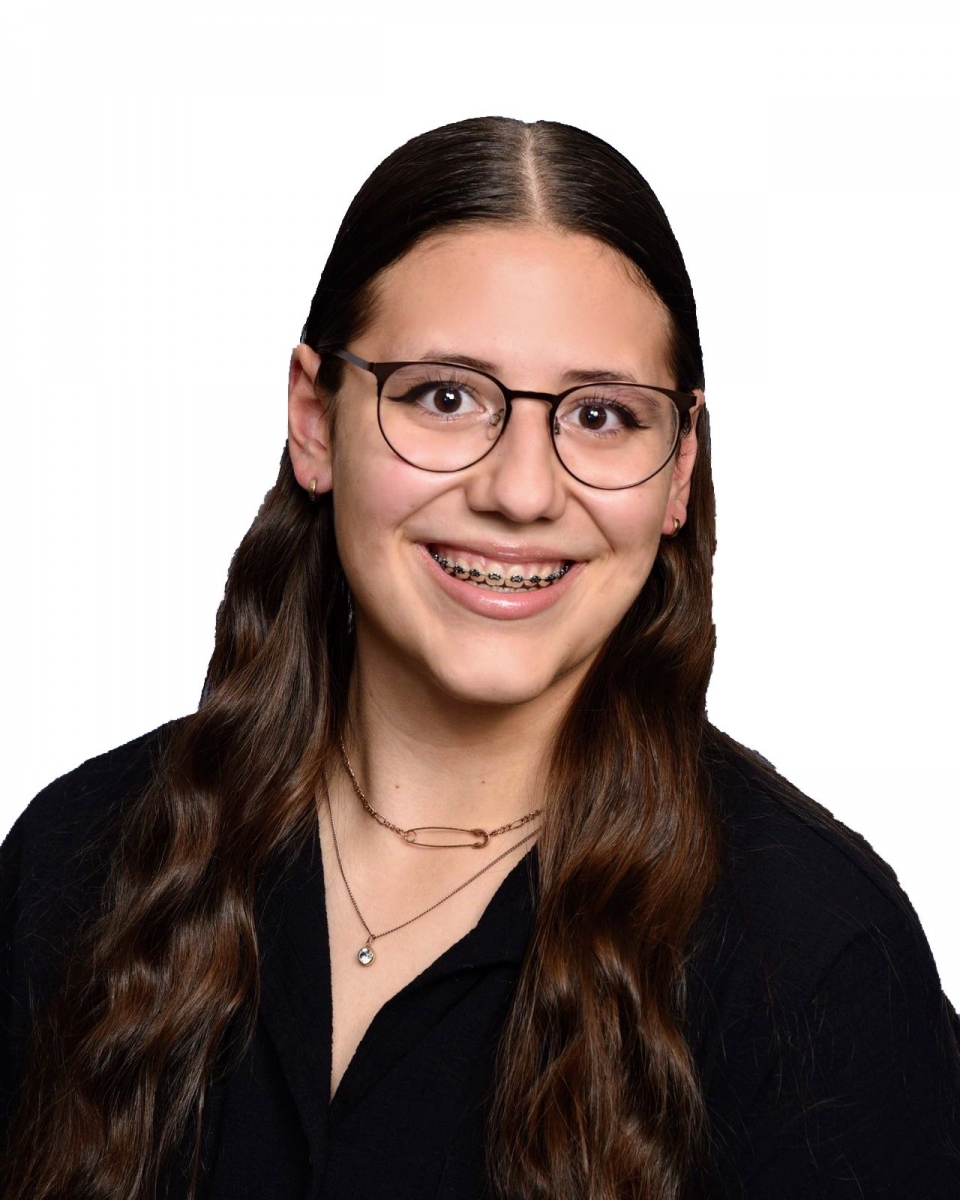 Answer: It was in state, so I could be close to my family, and I thought ASU was a great choice for a school and community for my major. I'm kinda interested to see what other opportunities I can explore at ASU and see the whole environment.

Q. What are you most excited to experience during your first semester?

A.  I'm pretty excited to just meet new friends and see the (West) campus. I really like it, it's a really beautiful campus.

Q. What do you think you might want to do with your medical studies degree?

A.  Right now, I'm kind of looking to explore the medical field. I know I'm interested in all the different things. Maybe neurology, because the brain really fascinates me. Maybe a neurosurgeon? Maybe that's kind of a big dream, but who knows? Maybe I'll find something super interesting and I can always explore that further.

Q. What do you like to brag about to friends about ASU?

A. There's lots of opportunities and diversity as well. Obviously I'll get more of an experience with that when I start school. I mean, also that (ASU) is No. 1 in innovation.

Q. What talents and skills are you bringing to the ASU community?

A. I graduated in the top 1% of my class, so I'd say I'm pretty excited, academically. But I also like doing art and I love learning languages as well.

Q. Do you speak any other languages right now?

A. So my first language was Romanian, because my parents came from Romania. They all went to college there, so I'll be the first to go to college here in the United States. I used to speak it a lot when I was younger too, but now I haven't spoken it as much.

Q. What do you hope to accomplish during your college years?

A. I hope to stay on top of my schoolwork, obviously. Definitely reach out, make new friends, make more connections with different people. Sometimes I tend to like to keep to myself, so I want to be able to branch out a bit more.

Q. If someone gave you $40 million to solve one problem in our world, what would you choose?

A. To solve one problem? Oh, there's so many different things. In the United States, I'd maybe say solving homelessness, because there's a lot of unhoused people. Definitely helping people who are struggling to have their basic needs met.