Bipartisan congressional approval of the CHIPS and Science Act, signed into law Tuesday by President Joe Biden, will drive a $52 billion investment by the federal government to help expand and accelerate U.S. semiconductor manufacturing, an important step for an industry critical to both economic competitiveness and national security. Arizona State University, along with a host of state economic ... 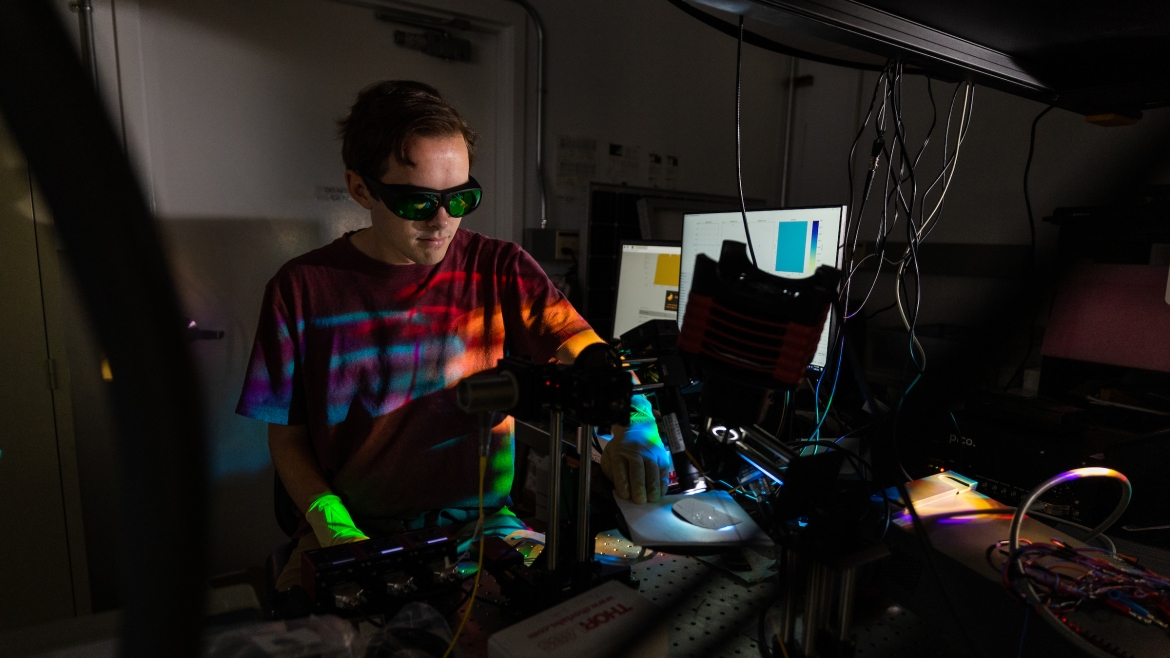 Bipartisan congressional approval of the CHIPS and Science Act, signed into law Tuesday by President Joe Biden, will drive a $52 billion investment by the federal government to help expand and accelerate U.S. semiconductor manufacturing, an important step for an industry critical to both economic competitiveness and national security.

Arizona State University, along with a host of state economic development and business leaders, has been deeply engaged to support Sen. Mark Kelly’s efforts to build a consensus in Washington, D.C., for the CHIPS and Science Act. That’s not by accident.

“Universities are the place in which the basic ideas of electronics, electrical engineering, computational systems and algorithm-driven tools have all been invented, discovered and advanced,” ASU President Michael Crow said. “Universities have been essential and integral to all aspects of the development of computation.”

ASU’s work in this space began when Motorola moved to metropolitan Phoenix in the 1950s and began looking for engineering talent — at a place then called Arizona State College.

“ASU is a foundational institution, deeply connected to the semiconductor industry,” Crow said. “The early seeds of the advancement of ASU as an engineering and industrial-oriented institution, long before it became a university, began around the semiconductor industry. ASU has evolved one of the most significant engineering schools in the world. We have advanced materials and research activity equal to any university on the planet.”

Nevertheless, while research and discovery continued in the United States, microchip manufacturing began moving offshore in the late 20th century, and today the country imports more than 90% of the chips it needs for consumer goods and national security. The gap is obvious. The issues addressed in the CHIPS and Science Act legislation have been in the university’s sights for several years.

“This is a validation,” said Kyle Squires, dean of ASU’s Ira A. Fulton Schools of Engineering. “We have made investments, hires and we’ve focused in areas that are directly relevant to the CHIPS Act through hiring, facilities, unique tool sets and one of the science and technology centers that are in line with this.”

What the federal investment means, according to Squires, is a greater focus and a more accelerated pace of activity. The state of Arizona has seen a lot of investment from companies in microelectronics and a greater focus on semiconductor manufacturing in the last two years. Congressional approval of federal investment in this industry will fuel private-sector activity that will advance America’s global competitiveness. China has been making national investments in this technology for years.

“The big deal about the CHIPS Act is that it provides certainty,” Squires said. “If you are one of the companies making these investments, having certainty unlocks a lot more conversation about what is next in terms of expansion and, for the big players like TSMC and Intel, the next step in their strategic plans.”

In addition to an infusion of resources into where the market stands today, Crow is quick to point out that along with expanded manufacturing comes additional research and development.

“What is essential to Arizona is not just the expansion of manufacturing, but also the leading research, discovery and development for innovation of what comes next,” Crow said.

ASU’s Knowledge Enterprise is already working to connect the laboratories where research is done to the fabrication plants where chips are manufactured — a “lab-to-fab connection.”

“Having research and development as part of this bill not only recognizes the nation’s capability in innovation and research, but actually supports it in a real way and is a very important commitment,” said Executive Vice President Sally Morton, who leads the ASU Knowledge Enterprise. “ASU has been planning for this and is already dedicated to this as a public university. We have the capability to scale education on all fronts, which is terribly important to achieving success.”

ASU has already been at work in anticipation of congressional approval. Now, the work expands and accelerates. But the assignment is truly national in scope; no single company, agency or institution can deliver the necessary resources to provide the solution.

Informed by that, the university’s next step is to advance the creation of a National Network for Microelectronics Research and Development, a nationwide network of chip manufacturers, labs and universities such as ASU with complementary strengths allowing secure transfer of knowledge between member institutions and researchers, which is critical.

ASU’s unique technical capabilities, its world-class faculty, and the scale and breadth of the Fulton Schools of Engineering and its graduates are of the highest quality. Add to it the university’s proximity to and relationships with industry leaders like Intel and TSMC, and it makes ASU a singular center of value for what the CHIPS and Science Act will enable.

As a bonus, congressional action at the federal level corresponds to the strategic investment for the past two years by the state of Arizona. The CHIPS and Science Act is an investment that works in strategic harmony with Arizona’s New Economy Initiative.

“The parallels are strong,” Crow said. “Arizona’s New Economy Initiative is built around the advanced semiconductor materials and advanced systems. The key to all of it is the building of the Fulton Schools of Engineering. We are doing that, have been doing that and will continue to do that. This is exactly what we have been preparing for, and everyone involved at the university is eager to take things to the next level.”

After the CHIPS and Science Act, what comes next for ASU?

1. Support all U.S.-based semiconductor manufacturers and their supply chains.

2. Development of human capital for industry — more and higher quality engineers and scientists.

4. Compete to make Arizona a national center for advanced semiconductor research and development, as prescribed in the CHIPS and Science Act.

Top photo: Researcher Mason Mahaffey works inside a research area with lasers at the MacroTechnology Works research facility in the ASU Research Park in Tempe, Arizona, on July 28. Photo by Deanna Dent/ASU