Alex Gulotta, Arizona state director of All Voting is Local, is a passionate advocate for voting equity and inclusion issues in Arizona and beyond.

On Sept. 7, he will deliver a lecture titled "Don’t Believe the Propaganda, Our Elections Are Secure," which is the first of three webinars in the 18th annual Seeking Justice in Arizona lecture series hosted by the School of Social Transformation at Arizona State University. The school sat down with Gulotta to talk about voter participation, the state of democracy and ways that the ASU community can get involved in policy change.

Question: Please tell us about your background and your current position.

Answer: I'm currently the Arizona state director for All Voting is Local. We work to expose and dismantle threats to voter freedom in order to make voting safe, fair and accessible, to build a democracy for us all. I've been doing this work since the summer of 2018. Before that, I was a legal aid lawyer, an anti-poverty lawyer and was the executive director of legal aid programs in Charlottesville, Virginia, and the San Francisco Bay Area before I came to Arizona in 2018.

Q: What is something that you learned during your academic journey or your professional journey that surprised you or changed or perspective?

A: I learned the importance of maintaining hope in the face of tough odds, because fighting for real equity and fairness in the world – it's a long road. Sometimes it's hard to maintain hope, but, in fact, maintaining hope is critical. There are victories every day. If we focus on them, that can give us hope, but it requires effort. As best we can, we need to focus on the ways we are making progress and then work together to make the leaps of progress bigger and more expansive.

Q: Can you describe the social problems you work on, and why you think these issues are important?

A: I was an anti-poverty advocate for 33 years as a lawyer, fighting to make systems fairer for low-income families. I moved to Arizona in 2018 to continue to do consulting with anti-poverty groups, but I grew concerned about the status of our democracy. It was under attack. Although we were beginning to see a democracy where the voices of communities that had historically been suppressed and disenfranchised were starting to be heard, some powerful and well-financed politicians didn't like that. They started doing everything they could do to change the rules to prevent those new voices from being heard, and those new communities from exercising real power.

So that seemed like a critical issue to me. I decided to get involved in democracy work and happened upon All Voting is Local. We fight for fair rules, regulations and processes to make voting safe, fair and accessible. I felt like I was at the right place at the right time, because guess what? The other rights we fight for, like access to housing, fairness surrounding consumer protection or creating a real and fair justice system … they're not going to happen unless we do a better job electing leaders that reflect those values. We can't do that if anti-democratic people successfully silence those voices.

Q: Why do you think these fundamental problems exist?

A: They exist because we live in a system where people with the biggest pocketbook get to have the most power and make the most important decisions. That's not the way it should be. Until we change that dynamic and stop giving rich people the ability to rule the rest of us, then that's what we'll get.

Q: How did you become involved in this type of work? Where did this interest stem?

A: I was raised as a Catholic and, during my college years, had the good fortune to be around radical Jesuits who believed in social justice, fairness and racial equity. They not only preached their values, they lived them. I went to law school as a practical way to live out those values.

Q: Law school can be a direct avenue to advocate for those changes you hope to see. Earlier, you mentioned remaining hopeful despite messages that could make folks feel otherwise. Is there anything else that inspires you to keep working toward social change, even when you're feeling discouraged?

A: Arizona's amazing. In terms of the power of young people here, the energy they have to change the way that society treats people … it’s awe-inspiring. I don't think I've ever lived in such a vibrant place with so much hope and energy. In the voting rights work that I do, there's a group of young people — people who would have been victimized by SB1070, the “show me your papers law” from a decade ago — who were like, "No way. That's not going to happen here. We live here. This is our home. We're going to make this a place we can love and respect, and a place where we get love and respect." They've done an extraordinary job of becoming powerful leaders of nonprofits and other organizations. Eventually, inevitably, they're going to be the people who are leading our state legislature and sitting in the governor's office. That's what gives me so much hope. There are tons of energetic, engaged, young people here who are committed to making Arizona a place that reflects true community values.

Q: Arizona is a hidden gem. Some may think California is the hub of change, but there is a lot of it here, too. What do you like best about what you’re doing?

A: I was trained as a lawyer, practiced as a lawyer for 30-some years. It has huge advantages, but it also involves a fair amount of red tape. Now, I’m an advocate where I work to prevent there from being a lawsuit by convincing people why a policy is good and should be adopted or why a position is wrong or illegal and should be avoided.

Q: What are a few concrete steps that people in the community can take to address voting-related justice issues?

A: Vote. Make sure you're registered to vote. Have a plan to vote. Make sure all of your family and friends are doing the same thing. Figure out what's happening with the ballot initiatives. There's a ton that are going to be on the ballot this fall. Figure out what they do, which ones support democracy in the way that you believe democracy should be supported, and support those. There are opportunities to volunteer for election protection. In 2020, we had 1,100 volunteers during the early voting period and on election day. They were in the communities standing outside of polling places, guiding voters and helping voters who were having problems. There're tons of opportunities. Go to democracypledgeaz.com, sign the pledge and check out the Get Involved page. There are a multitude of ways to get involved in improving our democracy.

The Seeking Justice in Arizona Fall Lecture Series, now in its 18th year, brings in experts from our local communities to discuss critical national issues in an Arizona context. Each lecture is followed by a Q&A session and time to interact with the speaker informally. These events are free and open to the public, and are held virtually on Zoom from 3 to 4:15 p.m. Video recordings will be available on YouTube following each event.

Imagine being able to know if you're sleep deprived just by blowing into a device.That's the eventual goal of a $4.8 million multidisciplinary project between Arizona State University and Texas A&M University that will create artificial intelligence for detecting fatigued states using human breath.The project aims to better understand sleep deprivation and mental and physical fatigue in humans...

Imagine being able to know if you're sleep deprived just by blowing into a device. 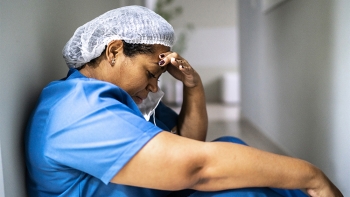 Human breath can detect health issues such as bowel inflammation and asthma. A new multidisciplinary collaborative project between Texas A&M and ASU will study human breath as a biometric to detect sleep deprivation, as well as mental and physical fatigue states. Photo courtesy Getty Images

The project aims to better understand sleep deprivation and mental and physical fatigue in humans by measuring breath volatile organic compound (VOC) biomarkers and how they can affect performance, especially in high-stakes environments. It is funded by the Defense Advanced Research Projects Agency’s Biological Technology Office.

Heather Bean, a researcher with the ASU Biodesign Center for Fundamental and Applied Microbiomics, along with Arul Jayaraman, executive associate dean of the Texas A&M College of Engineering and a chemical engineering professor, will measure VOCs in the breath samples.

Bean says the volume and combination of breath samples at different stages of fatigue protocols will help to advance the understanding of breath VOCs beyond the ability to predict fatigue.

“This study will generate more than 3,000 breath samples, which is an order of magnitude larger than any breath VOC study published to date,” said Bean, associate professor with the ASU School of Life Sciences.

Understanding the breath VOCs will enable researchers to create a set of AI algorithms to detect a person’s fatigued state.

“Fatigue is an important topic for the U.S. Department of Defense and many other sectors in our society. Yet, it is very challenging to quantify fatigue. I am pleased to see the DARPA’s investment in our rigorous scientific approach and its trust in our world-class team,” said Roozbeh Jafari, the Tim and Amy Leach Professor in Texas A&M’s College of Engineering and the project’s principal investigator.

Steven Riechman, associate professor of kinesiology in Texas A&M’s School of Education and Human Development, said the insights may lead to new opportunities for monitoring and predicting fatigue by using wearables to prevent catastrophic failures. He also said there may be new ways to intervene against fatigue to improve resilience in challenging environments and circumstances.

“Comprehensively examining the change in breath VOCs during the progression from rest to fatigue will provide valuable insights into the transitions in metabolic states,” Riechman said.

According to the project’s proposal, these compounds have been used before to detect other health issues, such as bowel inflammation and asthma. They will be key resources of chemical information from all body systems.

The project will be phased from a highly controlled environment, leading to less-controlled, real-life settings.

Texas A&M researchers will collect participants’ breath VOC samples at different states of fatigue with machines that can detect VOCs in the breath samples. They will use wearable monitors and sensors to measure heart rate, body temperature and other biometrics.

Ranjana Mehta, associate professor in the Wm Michael Barnes ’64 Department of Industrial and Systems Engineering and director of Texas A&M’s Neuroergonomics Laboratory, will lead the creation and execution of fatigue protocols with Riechman by inducing fatigue in a highly controlled environment.

“This project will not only enable us to develop breath and physiological biomarkers of fatigue in general and military populations but also expand our understanding of the interactions between fatigue due to a variety of sources,” Mehta said.

“The team will use pattern recognition and statistical modeling to identify VOCs that can detect and discriminate the types of fatigue studied during the course of the project,” said Ivan Ivanov, clinical professor of physiology and pharmacology at Texas A&M’s School of Veterinary Medicine and Biomedical Sciences.

Jafari will lead the project alongside co-investigators Bean, Mehta, Jayaraman, Riechman and Ivanov.