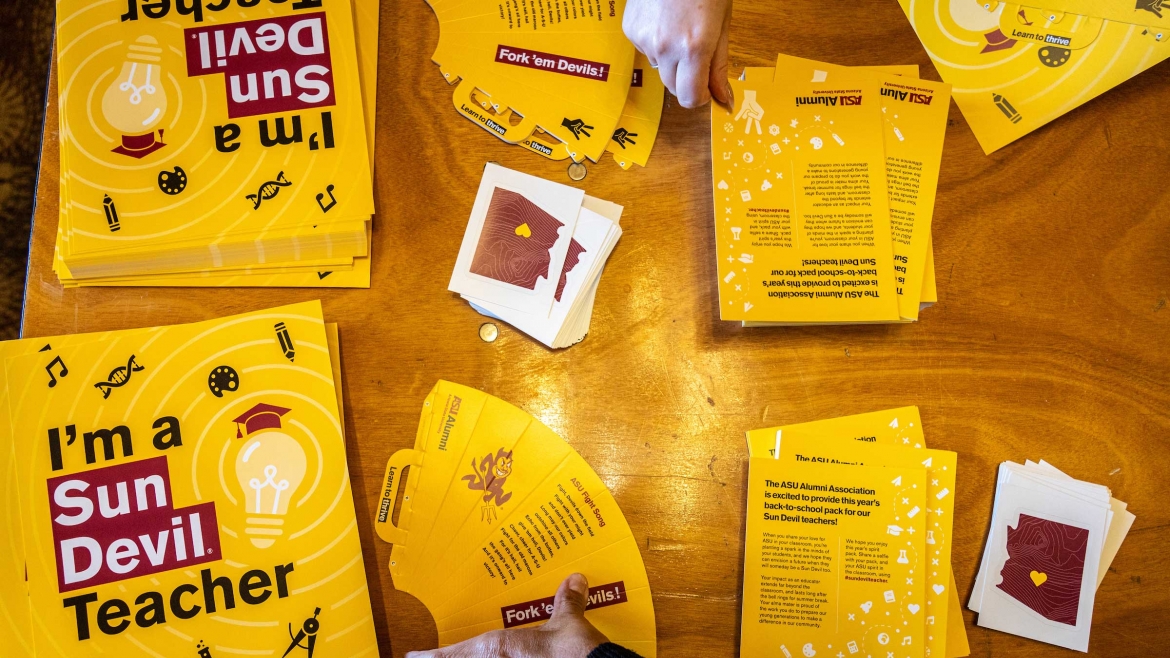 Each year, the Alumni Association offers Sun Devil swag for K–12 classrooms around the world

It's back-to-school time for Sun Devil teachers across the globe, and that means it's time to sign up for this year's Teacher Packs, put together by the ASU Alumni Association.

K–12 educators can show off their ASU spirit and inspire their students with a complimentary pack brimming with Sparky-themed goodies, gold-and-maroon supplies and ASU keepsakes.

“The ASU Alumni Association and its university partners want to thank our alumni educators who share ASU's mission to educate the next generation of community leaders,” said Christine K. Wilkinson, president and CEO of the association. “As educators begin to prepare for a new year, we want to provide materials and resources that allow them to show their Sun Devil pride and inspire their students.”

Through Friday, Sept. 9, ASU teacher alumni can visit alumni.asu.edu/sundevilteacherpack to sign up to receive the goodies.

Items includes an “I am a Sun Devil Teacher” sign, paperclips shaped like Sparky, a cactus and the Sun Devil pitchfork hand sign, a “#42 ASU” dog tag, ASU Alumni zipper pull, a sticker, a paper megaphone and more.

Teachers who post a selfie with the hashtag #sundevilteacher will be entered into a drawing for more ASU-themed swag.

This is the fifth year in a row that the Alumni Association has offered the pack to ASU-educated teachers around the world, and the popular program is growing.

Last year, the association sent out more than 3,900 Teacher Packs to kindergarten through high school teachers in all 50 states, the District of Columbia and eight countries.

This year, the association expects to top that by distributing 4,000 packs, which were recently packed by volunteers at the Alumni Association. 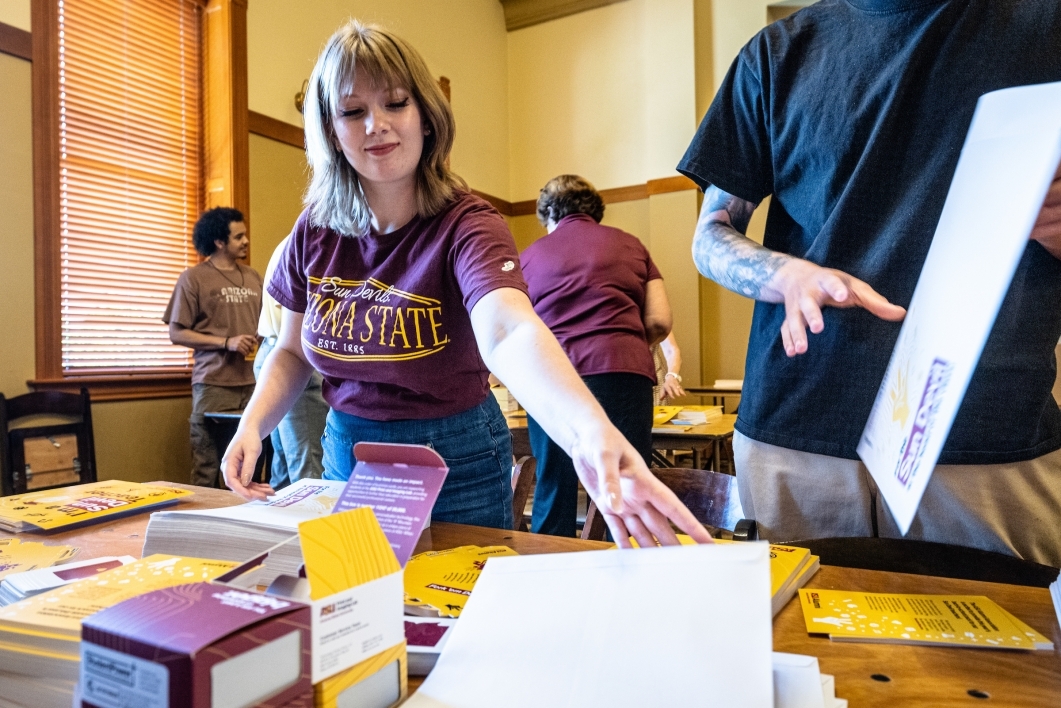 Annelise Strange, with the ASU Alumni Association, finishes up packing a back-to-school Teacher Pack on July 21, in the Carson Ballroom at Old Main on the Tempe campus. 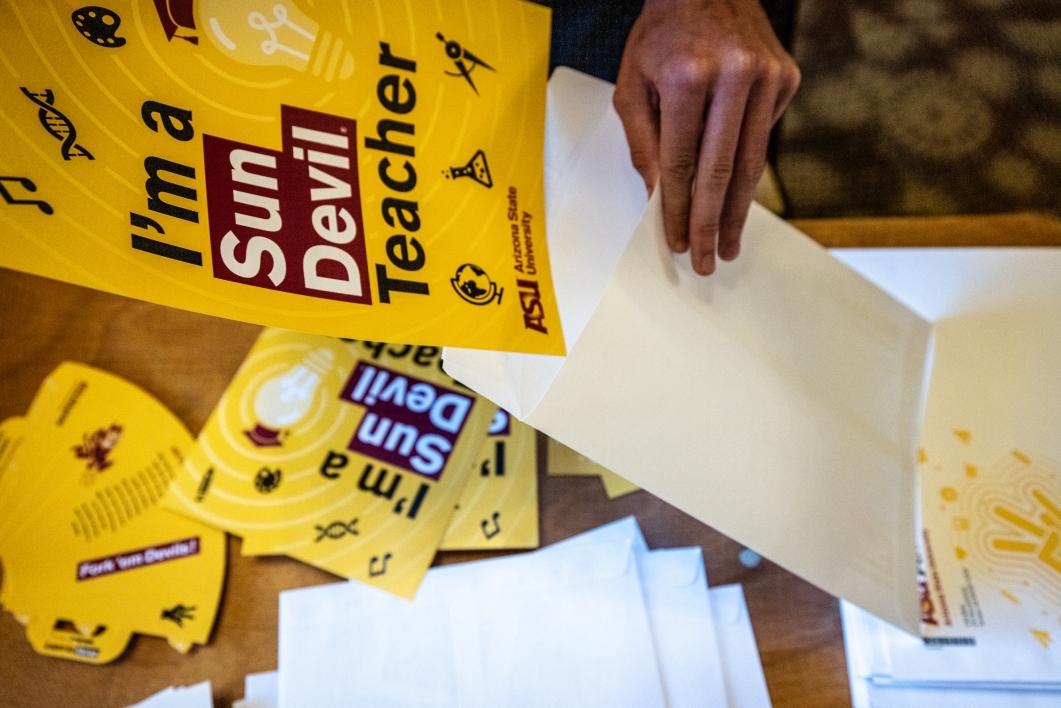 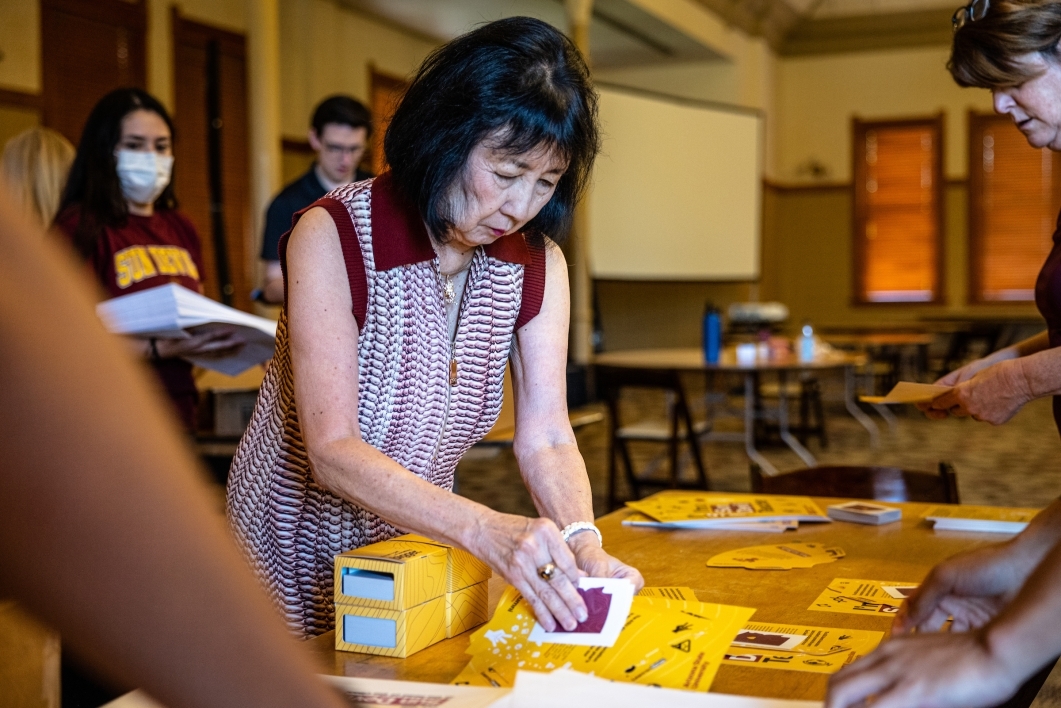 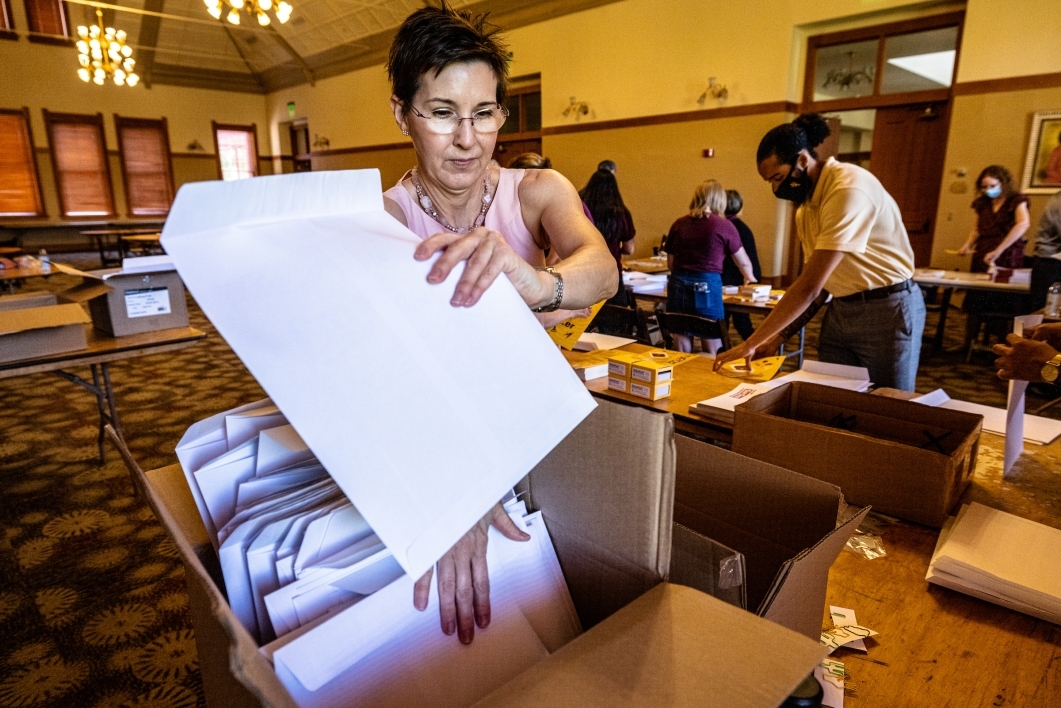 Kathy Montalvo, with the ASU Alumni Association, pulls out an envelope to put together a Teacher Pack. About 4,000 back-to-school Teacher Packs are expected to be shipped out to Sun Devil educators from around the world this fall.

Most people who fill up their gas tanks give little to no thought about where the gas comes from, or the effort it takes to get it to the pump.An online program at Arizona State University, which just celebrated its “tin anniversary," is devoted to this mission.The Global Oil and Gas Management Certificate program at ASU’s Thunderbird School of Global Management provides students with a well-r... 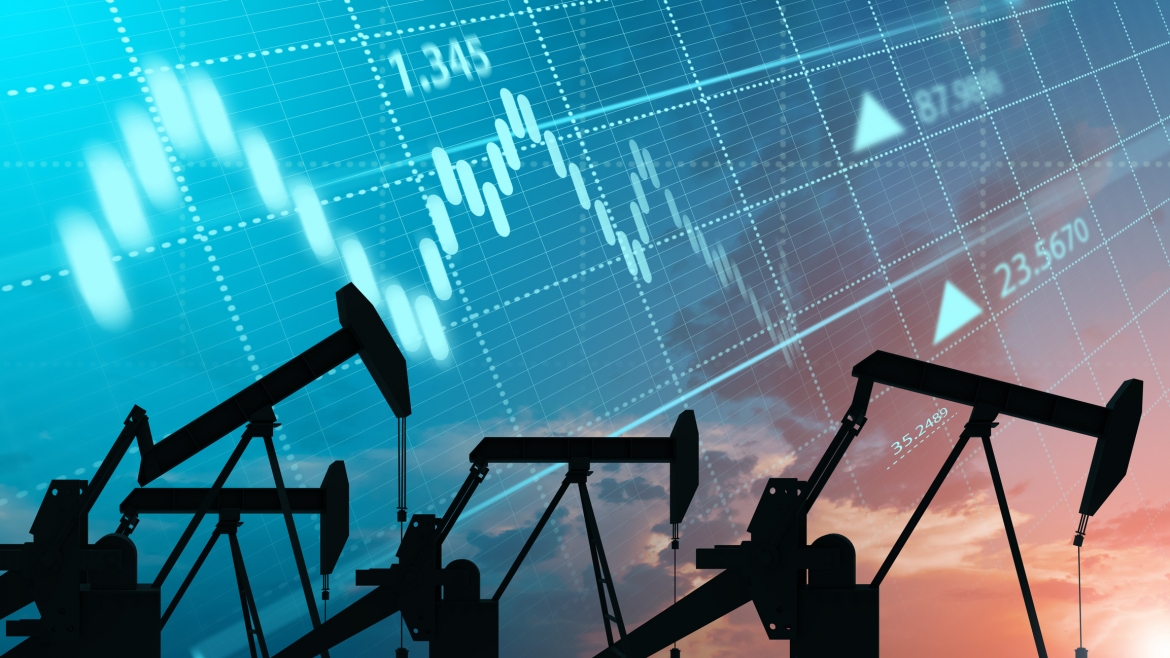 Most people who fill up their gas tanks give little to no thought about where the gas comes from, or the effort it takes to get it to the pump.

An online program at Arizona State University, which just celebrated its “tin anniversary," is devoted to this mission.

The Global Oil and Gas Management Certificate program at ASU’s Thunderbird School of Global Management provides students with a well-rounded understanding of how the oil and gas industry operates in an era of consolidation and competition. 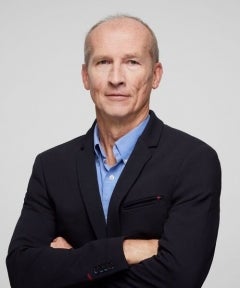 “This is a business-oriented program that will help an organization become a world leader in the highly competitive gas and oil market,” said Andrew Inkpen, professor of management and the J. Kenneth and Jeanette Seward Chair in Global Strategy at Thunderbird. “It is designed for people who either work in the industry or have hopes of working in the industry.”

Students must pass 12 modules, which come with pre- and post-tests, to understand how the oil and gas industry operates. They will receive a certificate at the end of the online, do-it-at-your-own-pace course.

While some students work in the gas and oil industry, others are employed by branches of the military, maritime security, conservation groups, exchange firms and large banks, according to a class roster provided by the school.

The online course is accessed by students from around the globe. Countries represented include UAE, South Africa, Columbia, Canada, Ecuador and Angola, along with multiple cities in the United States.

Inkpen said the class was co-designed with his colleague, finance Professor Michael Moffit. The two spent about a year designing the course before offering it to the public and updating the content as necessary.

“It’s a very technical and commodity-oriented class because it’s a complicated business,” Inpen said. “We designed this for technical people in the business and for people who don't know anything about the business but would benefit in understanding the industry. We didn’t find anything else out there that looked like our program.”

Some of the topics in the curriculum include:

Inkpen said the value of this industry must be understood on a global level and that gas and oil are here to stay — at least for a while.

“The transition away from oil and gas will take several decades, but we are on our way,” Inkpen said. “As of now, this industry remains our number one source of energy. Over time, renewable energy will grow in importance and oil and gas will decline.”

MORE: Thunderbird professor says gas prices will continue to climb in July and August because of summer travel

Rudy Aguado contributed to this article.