At Arizona State University's School of Molecular Sciences, ecological, ethical and molecular ways of thinking are being combined to design processes that are less hazardous, less polluting and more sustainable.

Associate Professor Ryan Trovitch and his students are taking this approach to improve chemical reactions by minimizing the use of toxic solvents and designing sustainable catalysts that offer enhanced energy efficiency. 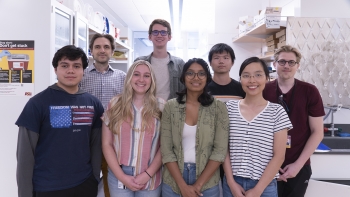 Catalysts for many reactions use precious metals such as rhodium and platinum, which are rarely found in high concentrations on Earth. This scarcity makes them expensive to mine and purify, and these processes can change entire landscapes and generate a considerable amount of waste.

These metals are also inherently toxic to humans and must be removed from pharmaceuticals and other fine chemicals before being sold to consumers.

That's why researchers in Trovitch’s lab are designing catalysts based on biologically-benign metals, such as manganese, iron and cobalt. These metals are much more abundant on Earth and are far less expensive to obtain.

Some of the reagentsA substance or mixture for use in chemical analysis or other reactions. Trovitch and his students have created are the most efficient reagents that have ever been recorded for specific reactions.

“We have developed some of the most active catalysts that are known for the reduction of unsaturated organic compounds,” Trovitch said. “This is noteworthy not only because of the turnover frequencies that are being observed, but also because we can use very low loadings of the Earth-abundant metal catalyst, avoid the use of solvent and run the reactions at room temperature.”

Manganese and nickel catalysts that were developed in the Trovitch lab have been commercialized in partnership with Sigma-Aldrich and ASU’s technology transfer office, Skysong Innovations. These catalysts were first discovered by Tufan MukhopadhyayMukhopadhyay is currently a postdoctoral researcher at NYU and Porter received his PhD from UCSD before accepting a staff scientist position at SRI International., who earned his PhD from the School of Molecular Sciences, and Tyler Porter, a graduate of the school who completed an honors thesis on the project. 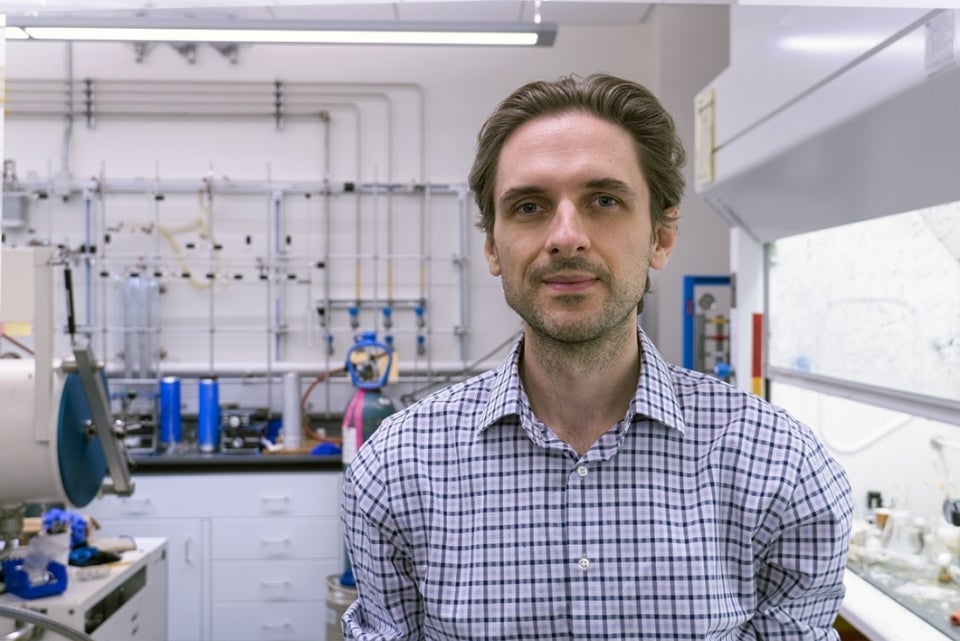 Trovitch and his students use mechanistic insight to guide the development of sustainable metal catalysts and to identify potential applications. For example, manganese catalysts developed in their lab have been used to replace platinum catalysts used in silicone curing, a reaction that allows for the production of oxygen-permeable contact lenses, transparent LED screen coatings, and silicone adhesives.

More recently, researchers in the group have discovered that manganese catalysts can be used to form Si‒N bonds in an atom-efficient way from silane and amine coupling partners. The corresponding silylamines are used in industry to deposit coatings that prevent the oxidation of silicon in semiconductors and solar panels.

The Trovitch lab is currently expanding these efforts to develop halogen-free methods of preparing organic polysilazanes. Solutions containing these polymers are often sprayed onto metal surfaces to protect them from corrosion and extreme temperatures; one relatable example is the application of clearcoat to protect automobile paint.

Because of their widespread use, developing catalysts that produce polysilazanes without the need for elaborate purification can minimize waste generation and circumvent the use of corrosive reagents.

As a member of the Green Chemistry Commitment Advisory Board, Trovitch has collaborated with ecologists, toxicologists and industry stakeholders to develop educational content aimed at preparing future chemists to consider the environmental impacts of the reactions that they perform. The students advised by Trovitch are being recognized for successfully applying these concepts.

“Chemistry must respond to changing societal needs and pressures, and must take ecological and ethical considerations into account when developing new science," Gould said. "The kind of chemistry that Ryan and his group are doing takes us in that direction."

Arizona State University has become widely recognized as one of the most innovative universities in the nation, and the establishment of the Glaunsinger Innovation Award by William and Lorna Glaunsinger in 2019 further reinforced that reputation.The award is given to a graduate student, or a team of graduate students, in the School of Molecular Sciences for excellence in achieving the school's mi...

Arizona State University has become widely recognized as one of the most innovative universities in the nation, and the establishment of the Glaunsinger Innovation Award by William and Lorna Glaunsinger in 2019 further reinforced that reputation.

The award is given to a graduate student, or a team of graduate students, in the School of Molecular Sciences for excellence in achieving the school's mission of discovering molecular-level solutions to real-world challenges through the development of research ideas, methodologies or inventions and entrepreneurship. 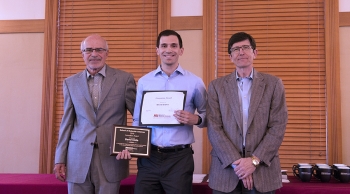 It includes a commemorative plaque, a grant to support further near-term development and access to expert entrepreneurial assistance and potential additional financial support after evaluation by SkySong, The ASU Scottsdale Innovation Center.

Thanks to a recent generous gift from the Glausingers to the ASU Foundation, the award has been funded in perpetuity.

William Glausinger chaired the ASU Department of Chemistry and Biochemistry from 1986 to 1989. During his time as a faculty member at ASU, he supervised several research facilities, directed industry-university cooperative programs and founded ASU’s first high-technology, venture capital-funded corporation.

Most recently, Glausinger served the ASU Emeritus College as assistant dean of sciences and professions. As a faculty member, he published over 140 articles in peer-reviewed scientific journals. He has eight patents in chemical micro-sensor technology based on 43 inventions. Glausinger received numerous awards throughout his academic career, including the first Outstanding Teaching Award in the Department of Chemistry at ASU, the ASU Distinguished Research and Creativity Award, the national Award for Innovative Excellence in Teaching, Learning and Technology, and the International Scientist of the Year Award for outstanding contributions to the field of solid-state science.

“The germ of the idea for this award came from my prior inventions at ASU as a faculty member and later on with my involvement with ISEF (Intel’s International Science and Engineering Fair), where many of the most creative high school students in the world display their inventions,” Glausinger said. “My primary motivation for establishing the SMS Innovation Award was to formally recognize significant inventions made by graduate students at this early stage of their careers and to provide a pathway for their further development via ASU’s SkySong Innovation Center.”

Glaunsinger added, “I think what sets this award apart from other graduate-level awards at ASU, as well as at other universities, is the emphasis on innovation and providing a viable mechanism for further development of the invention.”

There have been four Glausinger Innovation Award recipients to date: David Ciota in 2019 for the sustainable synthesis of nano-structured transition metal oxides; Swarup Dey in 2020 for rapid, inexpensive methodology for liquid biopsy-based cancer diagnostics; Nghi Nguyen in 2021 for converting carbon dioxide to fuels using sunlight and molecular-modified semiconductors; and Thu Thao Nguyen in 2022 for developing a catalyst that provides a sustainable and efficient method to produce semiconductor coatings.

“Their projects emphasize environmental sustainability and preserving human health,” Glaunsinger said. “In this regard, they are doing an admirable job of fulfilling the SMS mission. I have been very impressed with the research accomplishments of all of the awardees and hope that this award will help encourage these as well as future graduate students to continue to pursue their inventions.”

William and Lorna Glaunsinger continue to support innovation in a variety of venues. They have taught several courses on energy and the environment to high school teachers nationwide. They also served as judging chairs for the Intel International Science and Engineering Fair in Phoenix in 2005, 2013, 2016 and 2019. They were members of the Local Arrangements Committee responsible for volunteer recruitment, public outreach and providing an enduring legacy to science education in Arizona. They also served on an international judge advisory committee responsible for making improvements in the judging process.

William Glausinger recently received an inaugural Innovation Award from the Association of Retiree Organizations in Higher Education for the successful development of a science fair mentoring program for Arizona high school students who have been selected to attend ISEF.