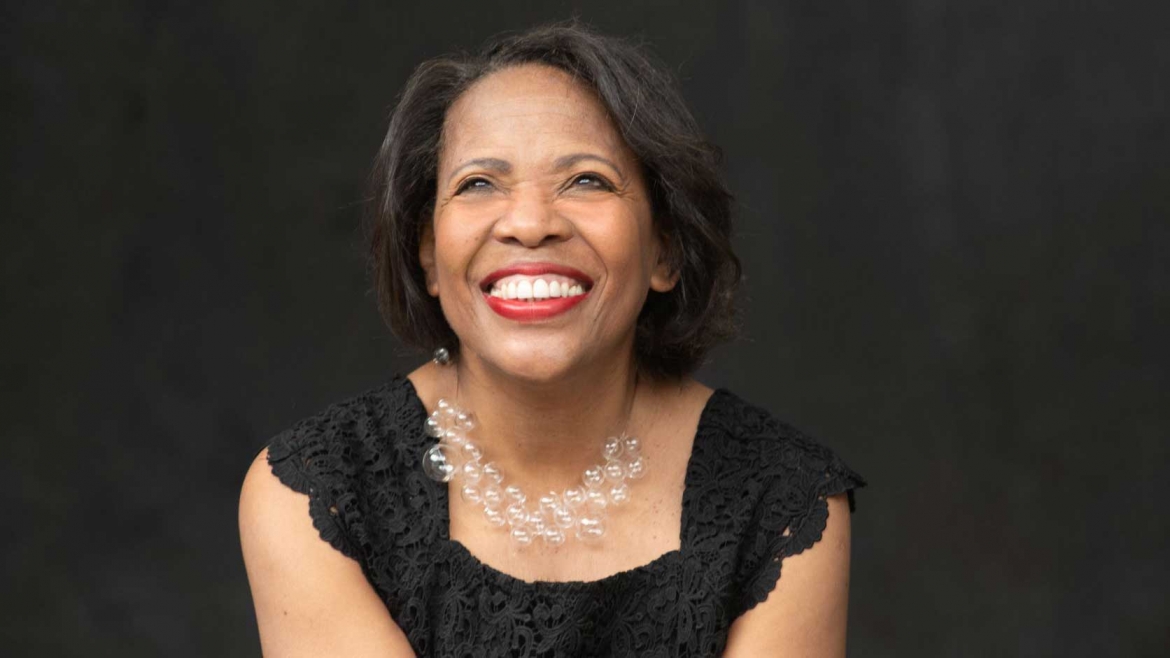 Thirty years ago, on her first night as executive director of ASU Gammage, a lackluster performance of “Evita” lit a fire in Colleen Jennings-Roggensack.

“The show looked tired, the cast was phoning it in, and I was distressed,” she recalled. “After the show, I went backstage looking for the company manager, and on the callboard in the hallway, there was a sign that said, ‘Hey everyone, we've got to gear up for our next stop, it’s a real theater town.’ I was livid. And from that moment, I knew I had to make a change.”

In the three decades since then, that fire has stoked not only the transformation of ASU Gammage into a well-respected and highly-regarded theater, but the creation of several cultural participation programs that have gone a long way in fostering the theater’s mission of “connecting communities.”

“It’s hard to believe it’s been 30 years,” said Jennings-Roggensack, who also serves as vice president of ASU Cultural Affairs. “I have loved every second.”

And with an impact that has reached not only the Sun Devil community, but the city of Tempe, the state of Arizona, the nation and the world, it may be safe to say she is a real-life superwoman.

Before coming to ASU, Jennings-Roggensack worked as acting director for the Hopkins Center for the Arts at Dartmouth University. Wanting a fresh start and place to raise her family, she first entered Sun Devil territory in 1992 with her husband and ASU volcanologist Kurt Roggensack.

She soon came to realize that the university could offer her the chance to make a true and meaningful difference in the community.

“I knew there was great opportunity here. I knew we could make ASU Gammage an internationally recognized performing arts center,” Jennings-Roggensack said.

Driven by that ambition and a vision to make ASU Gammage a bona fide cultural destination, she established the theater’s mission of connecting communities.

That mission is evident in every aspect of Jennings-Roggensack’s work, and is proof that ASU Gammage is not just a venue for shows and musicals, but a place for the community. Today, a variety of cultural participation programs introduce thousands of local children to the live-theater and performing arts world.

In addition, ASU Gammage offers programs ranging from Military Family First Nights, which provide military families the opportunity to attend Broadway productions, to Journey Home, a four-week arts program for incarcerated women at the Maricopa County Estrella Jail. And with the introduction of artist residencies, creative professionals have a space to grow in their craft and share their works with students in workshops and master classes. 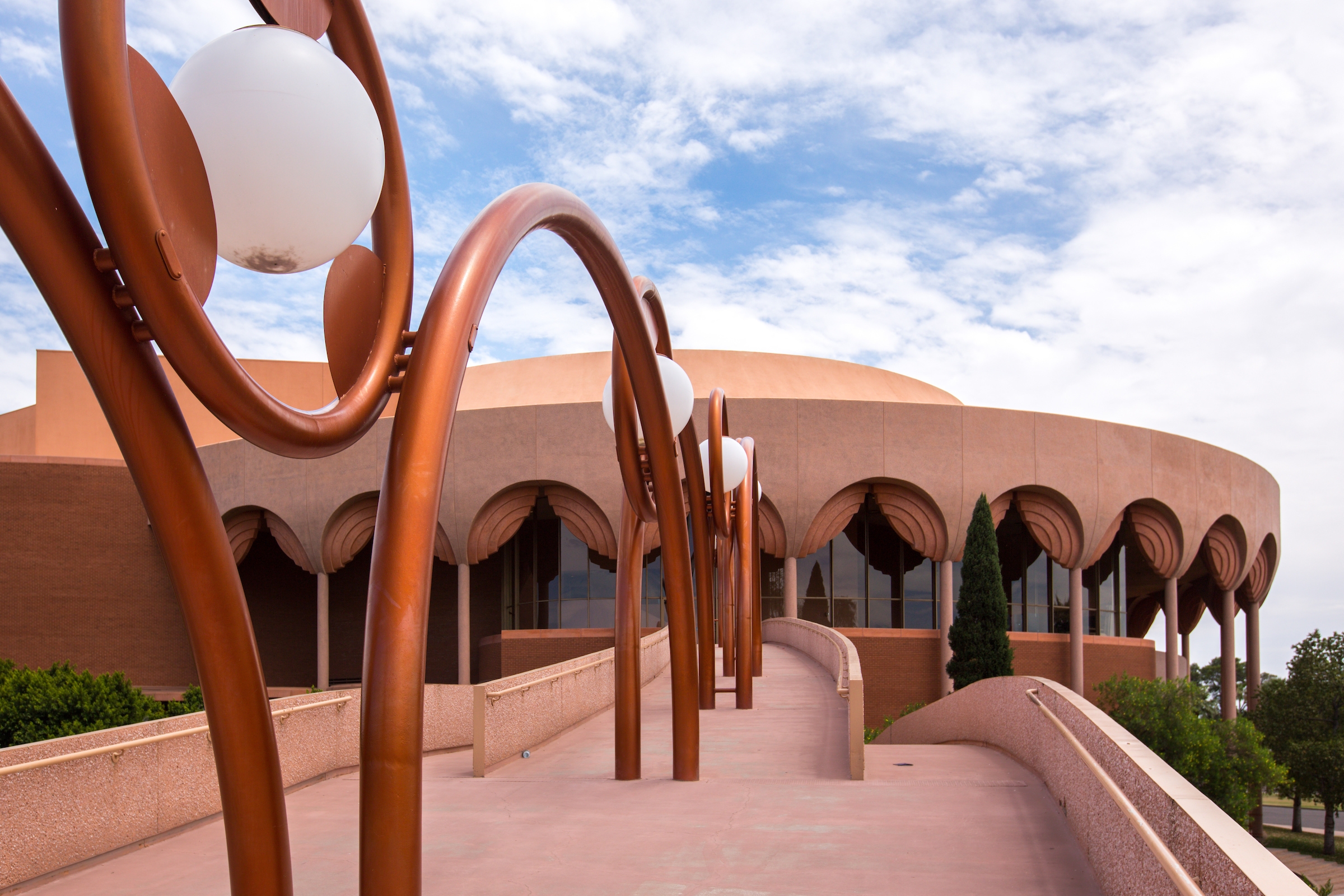 Marine corps veteran Ray Cook and his wife, Christa Cook, attend Operation Date Night at ASU Gammage in 2016. The event provided dinner and tickets to a Gammage show for 50 veterans and their guests. 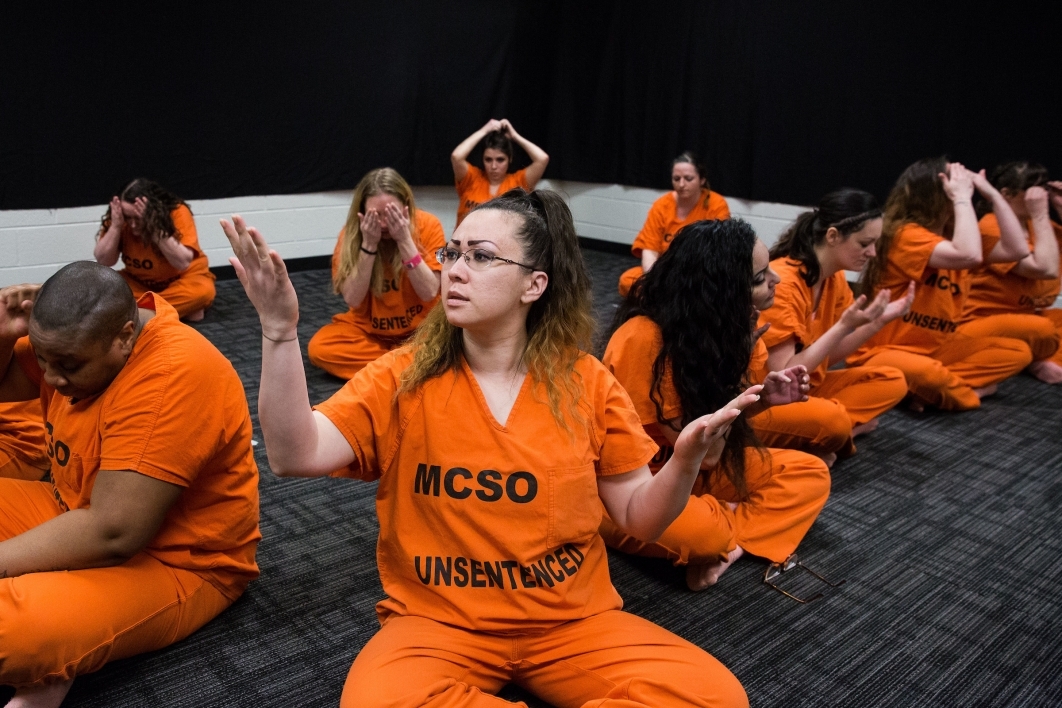 Women perform a seated dance during a Journey Home performance at the MCSO Estrella Jail facility in 2018. Journey Home is a four-week arts program ASU Gammage offers for incarcerated women. 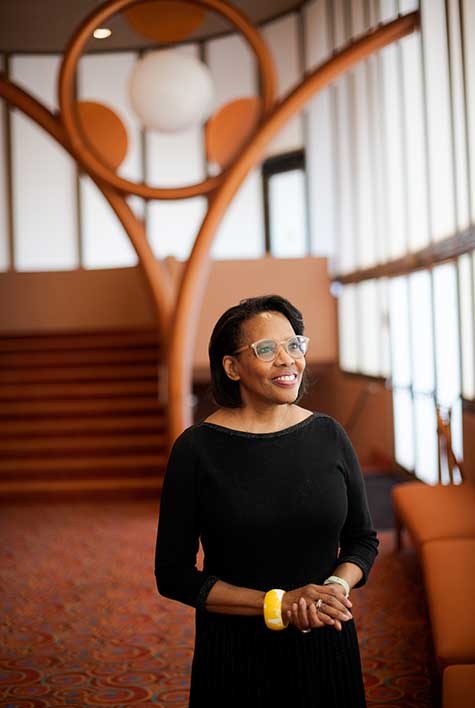 Colleen Jennings-Roggensack poses inside the lobby of ASU Gammage in 2020.

Aside from her impact on the community, Jennings-Roggensack has shown the theater industry that Tempe truly is an arts and cultural community, working day and night to create strong and lasting relationships with local leadership and arts community members. She has also strengthened and grown ASU Gammage’s relationship with Broadway Across America, the preeminent presenter of touring Broadway shows in North America, so that ASU Gammage now presents the best of Broadway.

But she didn’t stop there. Wanting to create arts experiences that were like nothing else, and present artists from around the world and from various disciplines, Jennings-Roggensack helped launch ASU Gammage’s Beyond series.

Over the past 30 years, not only has Jennings-Roggensack transformed ASU Gammage, but she has left a larger cultural mark on the ASU community through her work with ASU Kerr, the ASU Homecoming Block Party, the ASU Annual MLK Celebration, ASU’s LIFT initiative and the ASU 365 Community Union.

In the past, Sun Devil Stadium was used only seven times a year for home football games. ASU 365 Community Union was created to turn the football field into a university asset that is utilized 365 days a year. The football field now hosts a variety of events and cultural activities, from concerts to yoga classes.

“The reality is there is not another program like it,” Jennings-Roggensack said. “Through ASU 365 Community Union, we are looking at Sun Devil Stadium through a cultural lens and utilizing this space to make a difference.”

Looking ahead: The sky is the limit

While there are many accomplishments throughout her 30 years at ASU to celebrate, Jennings-Roggensack’s work is far from done as she plans to continue expanding and strengthening ASU Cultural Affairs’ mission of connecting communities.

She said the sky is the limit, and the key to continued success is surrounding yourself with great people.

"I am really good at hiring people who are really good,” Jennings-Roggensack said with a laugh. “My job is to lift up the people who work for me, give them the responsibility and the authority to be creative, and great things happen.”

And while she puts in the hours at work, she still manages to set aside time for herself and her family.

“One of the keys to work-life balance is having a really great partner. Kurt is amazing. We are beekeepers, ride tandem bikes and we always set aside time to do things that (are) only for us,” she said. “We also have an amazing daughter, who is very gifted in so many areas.”

Looking toward the future, Jennings-Roggensack said she hopes to continue lifting those around her, and one important thing she’s learned from her three decades at ASU is to be motivated by your passions.

“You can teach anyone anything, but you cannot give someone passion,” she said. “I tell everyone passion gets you up in the morning; passion keeps you going. It isn't your job title, or how much money you make, or how big a house you live in; it's the passion you have for whatever your work is. And the passion I have for this job is unmeasurable.”

Malcolm Holmes, an accomplished marketing and public affairs professional, will join Arizona State University’s Walter Cronkite School of Journalism and Mass Communication to serve as its executive director of strategic initiatives and diversity.Holmes will serve on the Cronkite School’s leadership team, tracking progress and measures on strategic initiatives, helping to enhance and expand the...

Malcolm Holmes, an accomplished marketing and public affairs professional, will join Arizona State University’s Walter Cronkite School of Journalism and Mass Communication to serve as its executive director of strategic initiatives and diversity.

Holmes will serve on the Cronkite School’s leadership team, tracking progress and measures on strategic initiatives, helping to enhance and expand the student experience, executing and assessing the school’s comprehensive diversity strategy, and directing the pursuit of, and reporting on government grant opportunities. 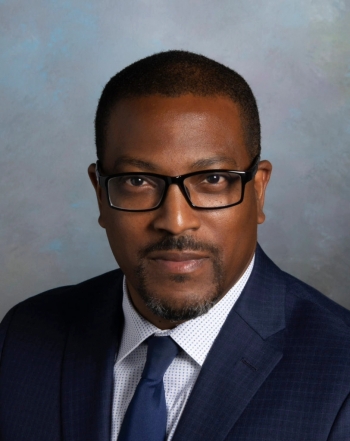 “I have known Malcolm Holmes for a very long time and have always respected his talent, work ethic and leadership. He is committed to quality, standards and, most importantly, student success. Malcolm will be an excellent addition to our leadership team and a tremendous asset to all of Cronkite nation,” Cronkite School Dean Battinto L. Batts Jr. said.

“I am humbled and grateful for this opportunity. I look forward to working with Dean Batts and the entire team to actualize the strategic vision, goals and priorities of the Cronkite School,” Holmes said.

Holmes was most recently the director of university marketing and brand manager at the University of Mary Washington in Fredericksburg, Virginia, where he was a member of the advancement and university relations leadership team since 2013. In that role, he was responsible for enhancing the university’s visibility and brand awareness, which included creating and implementing marketing plans for academic programs and admissions, and developing advertising objectives and media plans.

Holmes also served on a number of university committees and councils at Mary Washington, including the diversity task force, leadership council and marketing committee.

Prior to that position, Holmes was director of marketing communications and public affairs at J. Sargeant Reynolds Community College in Richmond, Virginia, where he worked to broaden the impact of the college’s programs, oversaw organizational messaging and promoted constituent services.

He started with the college in 1993 as printing and publications services manager before advancing through various positions during almost 20 years at the school.

During that time, Holmes also served as board chairman for the Carver Promise, a nonprofit mentoring partnership in Richmond between local colleges and universities and elementary-age students.

He graduated from Virginia Commonwealth University with a Bachelor of Science in mass communications and received a Master of Arts in media and communications from Norfolk State University.