Christi Jay Wells, associate professor of musicology in Arizona State Univeristy's School of Music, Dance and Theatre and the 2021–23 Center for the Study of Race and Democracy Race, Arts and Democracy Fellow, was recently awarded a $6,000 research grant from the National Endowment for the Humanities Summer Stipends program.

"Professor Wells' NEH research grant confirms the depth, breadth and promise of their scholarship and critical inquiry,” said Lois Brown, ASU Foundation Professor of English and director of the Center for the Study of Race and Democracy. “As one of the (the center's) Race, Arts and Democracy Fellows, Professor Wells has inspired audiences to consider the untold stories of the arts, and of music in particular. Their recent book and ongoing work confirm the importance of thinking intentionally about how society and institutions shape and calibrate our understanding of the public and private nature of music, especially jazz." 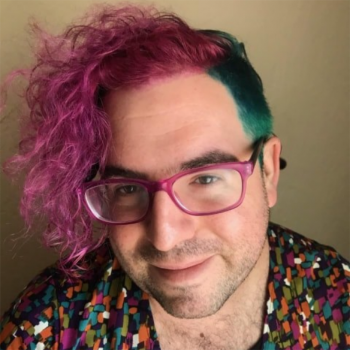 “Musicologists are increasingly discussing the private and public institutions that have shaped the United States’ arts patronage structure since the 1960s, yet jazz has not been the central point of focus,” Wells said. “My goal is to understand the Smithsonian’s role in jazz patronage as an institution with not only a national and international reach, but also an important place in the local arts economy and cultural ecosystem of Washington, D.C., and its environs.”

Wells said the Smithsonian has invested substantial attention and resources in the promotion of jazz music and in the documentation and preservation of that music’s history for more than half a century.

They said jazz has been a strong focus at the Smithsonian across agencies and museums, including Smithsonian Folkways, the National Museum of American History, the National Museum of African American History and Culture, the Portrait Gallery and the Anacostia Community Museum. In 1973, the Smithsonian released “The Smithsonian Collection of Classic Jazz,” which was the first major anthology of jazz recordings. As the only compilation of its kind at the time, Wells explained, it became the de facto companion anthology for a whole generation of jazz history textbooks, and defined and shaped jazz history curricula.

In addition, the Smithsonian’s National Museum of American History houses the largest collection of archival materials of Duke Ellington, documenting his life and career. The museum also maintains and operates a major jazz repertory orchestra, and founded Jazz Appreciation Month, which is now celebrated internationally.

The Smithsonian Institution Archives houses material of crucial importance to Wells’ project. They will spend most of their time conducting research at the archives and the National Museum of American History Behring Center. The Smithsonian’s archives have only recently reopened from COVID-19-related closures, though Wells’ digital research began in summer 2020 working with archival materials provided to them by the Smithsonian, including almost 300 hours of radio broadcasts and orchestra rehearsals.

By focusing on the Smithsonian and its relationship with jazz music, Wells said they hope their work contributes to important conversations in the interdisciplinary field of jazz studies, with implications in music history, public policy and urban studies.

“This book’s emphasis on institutional jazz patronage expands themes from my first book, ‘Between Beats: The Jazz Tradition and Black Vernacular Dance’ (2021),” Wells said. “‘Between Beats’ is about the relationship between jazz music and jazz dance, their intertwined histories and how narratives are formed and maintained in jazz. This second book will offer a major case study from an institutional history and cultural policy perspective that explores how these narratives both shape and are shaped by institutional structures.”

Their second book is currently conceived as a chronological study with one chapter devoted to each particularly important decade in the Smithsonian’s history, with jazz music from the 1960s through the 2010s.

Wells said their goal is to author a book about how the Smithsonian, as a large-scale institution with national and international reach, functions as part of a local arts economy and a steward of art forms from minoritized and marginalized cultures, specifically Black American culture. They hope their research will offer both positive models and cautionary tales for other large institutions, including ASU.

“I think that our School of Music, Dance and Theatre and Arizona State University as a whole are increasingly doing more to be inclusive of different kinds of music, especially forms of music from cultures that have been left out of the curriculum or out of the institution’s spaces in the past,” Wells said. “There is a duty to make sure that we are not acting as colonizers and that we are engaging with local communities in just, equitable and responsible ways.”

ASU Prep Learning Cloud is a streaming solution that empowers schools to deliver innovative and interactive 3D learning experiences to students using low-bandwidth devices. The technology was developed on and is powered by Google Cloud. 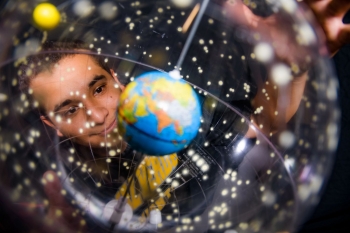 This new platform invites students to solve challenges by immersing themselves in interactive settings made possible by technology. Students can watch geologic formations emerge through simulations rather than reading about it in a textbook, or explore human organs in 3D, brining topics like erosion, hydrolysis and human anatomy to life.

To successfully complete a lesson, students must think critically about the concept, explore it and learn through discovery. Real-time, instructive feedback also helps contribute to a more individualized learning experience.

The ASU Prep Learning Cloud represents an important step toward accessibility for students in rural areas, with limited broadband access, and districts where limited technology funding makes it difficult to deliver cutting-edge learning opportunities. This immersive cloud-based education technology can be experienced from mobile devices or Chromebooks, increasing accessibility for all learners, anytime, anywhere. Removing those barriers is especially important for a program like ASU Prep Digital, which can be instrumental in bridging gaps for districts where resources are slim.

“ASU Prep Digital has allowed us to partner and advance educational opportunities for thousands of K–12 students who might not have otherwise had access to the courses, credits, mentors and teachers we offer,” said Arizona State University President Michael Crow, who is widely known as a pioneer of online education.

Crow’s vision has created a tech-enhanced learning environment across ASU, inclusive of pre-collegiate students via ASU Prep Digital. A key element of that vision is expanded opportunities in online education, which offers a path to higher education for students who are otherwise hindered from pursuing their education goals. In addition to its rapidly expanding K–12 enrollment, ASU Prep Digital’s School Partnerships continue to grow. The program supports entire school districts in states like Utah, Louisiana and Ohio, as well as schools in 22 states and 12 countries.

In addition to the full- and part-time students who enroll directly with ASU Prep Digital, the school also teams with private schools, public schools and districts worldwide to offer a K–12 curriculum and one-on-one instruction in a virtual environment. The program’s latest suite of courses, which will be available this fall to partner schools via the ASU Prep Learning Cloud, powered by Google Cloud, can be used in compliance with the Family Educational Rights and Privacy Act (FERPA).

“Our partnership with ASU Prep Digital has the ability to unlock new and innovative academic opportunities for learners across the country,” said Steven Butschi, director of education for Google Public Sector. “We’re unleashing the power of Google Cloud to help make individualized, digital and interactive learning the new standard in education.”

Courses integrate seamlessly into existing learning management systems, while supporting robust interactive features that personalize learning. The platform currently supports ASU Prep Digital partner schools, but in the future, could be rolled out to other educational institutions.

“As immersive technologies become more widely adapted in education, 3D-learning environments such as augmented reality and virtual reality offer great potential for engagement and retention,” Sudarma said. “Our collaboration with Google Public Sector is a terrific first step in expanding access to immersive solutions across many devices, and we’re working together to explore ways immersive technologies can be made even more universally available to eager learners.”

Preview a snapshot of ASU Prep Learning Cloud courses or take a deeper look at the immersive platform.