During this emerging era of geopolitical competition and compounding security challenges, it is imperative for international security practitioners to stay up to date on current trends that shape contemporary national statecraft.

Thanks to Arizona State University’s new, forward-thinking graduate certificate in global security and competitive statecraft, security-related professionals can stay ahead of developing trends and have a stronger grasp on contemporary problems in the global strategic environment. The online certificate, offered through ASU’s School of Politics and Global Studies, is an expansion of its Global Security graduate offerings, which include a Master of Arts in global security and a cybersecurity concentration.


“The new certificate builds on the success of our MA in global security, which students consistently describe as key to their career advancement,” said Daniel Rothenberg, a professor of practice at ASU and co-director of the global security graduate program and the Center on the Future of War.

“The complex evolving security environment requires nimble thinkers,” said Jeff Kubiak, a professor of practice at ASU and co-director of the MA in global security program. “Our new graduate certificate in global security and competitive statecraft helps train professionals to be prepared for the demands of a rapidly changing world.”

“The level of engagement I see in the courses I teach is unmatched for an online program,” said Alicia Ellis, an ASU lecturer in the global security program. “It’s an exciting place to be, and I’m thrilled that the certificate students will get that same benefit by being in the courses with our graduate student body.”

Program faculty for the certificate are leaders in their respective fields and provide policymakers’ views on everything from cybersecurity to counterterrorism to human rights.

“Students in the graduate certificate in global security and competitive statecraft will be learning from an all-star cast of experts. There is just nothing else out there that better prepares students for work in the security field,” said Magda Hinojosa, director of the School of Politics and Global Studies.

“Additionally, the certificate faculty are all a part of a much larger security network through ASU's Center on the Future of War, the ASU connection to the policy-forward Washington, D.C., think tank New America,” said Kubiak. “This network can expose students to research and employment opportunities across the security field.”

Question: What was the motivation behind the creation of the graduate certificate?

Answer: Actually, there were several. First, many security professionals are in search of a program to update their knowledge of the evolving security field, but either already have a graduate degree or for some other reason are not interested in completing a full MA. The coursework for the new certificate is the same as is available to students in the popular and successful MA in global security. Certificate students can pick and choose from several of the offered courses and get just the information they feel is interesting or necessary. The certificate is a bite-sized offering of the MA to make the coursework available to even more interested security practitioners.

Second, several employers make funding available to employees for continued professional development, which often includes grad certificates but not full graduate degrees. The certificate provides cutting-edge security education available as professional development without the commitment to a graduate degree. Finally, we have a number of partners in the Department of Defense and elsewhere in the security space interested in certificates for their workforce. We have the flexibility to create some specific coursework for them as part of the broader list of available courses.

Q: What will students learn while completing the certificate?

A: The focus of the courses included in the certificate is the dynamic global political arena in which states and other actors compete for security and prosperity. Students can take courses on the future of war from a bestselling thought leader, Peter W. Singer; courses in cybersecurity from the first deputy commander of USCYBERCOM (U.S. Cyber Command), retired Marine Corps Lt. Gen. Robert Schmidle; the impact of emerging technology on security from a former administration official and RAND political scientist, Anika Binnendijk; the impact of urbanization on security from one of the foremost experts in contemporary conflict, David Killcullen — and the list goes on. Each of the courses is taught by a top security expert and covers topics that are at the cutting edge of discourse and interest in the area of global security.

Q: How might this certificate and the faculty that lead it help advance the careers of its graduates?

A: The certificate will update current and aspiring security practitioners on the issues and ideas shaping the global security environment in a competitive era. They'll be exposed to the big ideas, the current research, and be provided new and useful frameworks for analyzing the dynamic security environment. At a minimum, students will walk away with the ability to engage in discourse on, and provide analysis of, a range of security issues and events, using cutting-edge ideas and vocabulary.

The world is composed of solids, liquids, gases and plasmas: the four forms in which all matter exists in the universe. At high concentrations, such as in tiny groups of atoms, matter has different “condensed” states represented by different formations, like ordered crystal patterns, random patterns and those that lie somewhere in between. One of those in-between states is called hyperuniformi...

The world is composed of solids, liquids, gases and plasmas: the four forms in which all matter exists in the universe. At high concentrations, such as in tiny groups of atoms, matter has different “condensed” states represented by different formations, like ordered crystal patterns, random patterns and those that lie somewhere in between. One of those in-between states is called hyperuniformity, and its disordered nature contributes unique properties.

Yang Jiao, an associate professor of materials science and engineering in the Ira A. Fulton Schools of Engineering at Arizona State University, is a co-principal investigator on a new Multidisciplinary University Research Initiative, or MURI, project funded by the U.S. Department of Defense to investigate disordered hyperuniformity and its applications. The project, “Transport in Disordered Hyperuniform Systems and Networks,” is led by Salvatore Torquato, a professor of chemistry at Princeton University. 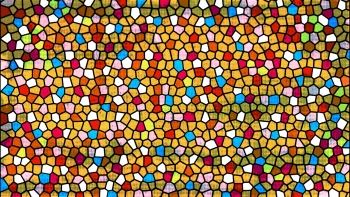 An illustration of a tessellated pattern inspired by the concept of a hyperuniform atomic structure. Hyperuniformity is a condensed state of matter that appears disorderly but exhibits patterns and symmetry at larger scales. A better understanding of the not-quite-uniform nature of hyperuniformity could lead to innovation in communications, transportation and networks. Graphic by Sarah Pierson/ASU based on figure courtesy of Yang Jiao Download Full Image

The five-year grant of just over $6 million reflects the DOD’s investment in interdisciplinary research for areas of strategic importance. In 2022, the department has awarded $195 million to 28 research teams spanning a variety of science and engineering disciplines.

Deeper knowledge of hyperuniformity could spark innovation in the field of photonics by providing new and more effective materials to transport light. Understanding hyperuniform networks can also improve communication and transportation networks, as well as our understanding of disordered networks in general, leading to new concepts for designing networks that can adapt to disorder and be highly robust against attacks.

Research into states of matter has continually advanced over the past 100 years. In the 1950s, scientists understood formations of atoms in two ways: an ordered formation called “crystal” and a disordered formation dubbed “random.”

Materials scientists discovered a third pattern in the 1980s that they called the “quasicrystal” pattern, which was not random but not completely ordered and uniform like the crystal pattern in that it lacks long-range translational order.

Then, in the 2000s, Torquato and Frank Stillinger, a theoretical chemist at Princeton University, discovered a new state of matter — the hyperuniform structure — that looks like a random pattern on local scales, yet possesses unique, hidden long-range order on large scales as in crystals.

Hyperuniform structures can be found throughout the natural world, for example, in birds’ eyes. Birds have great vision due to the wide variety of photoreceptors in their retina.

Other lifeforms with optimized vision typically have photoreceptors arranged in identical patterns, such as in hexagon shapes. However, the variety of photoreceptor cells in birds’ eyes does not allow for an ordered structure. Instead of exact geometric patterns, the hyperuniform system for birds’ vision includes photoreceptors in disorganized patterns of non-identical polygons or organic shapes that optimize the way they can perceive light. Outside of nature, hyperuniform materials have demonstrated increased proficiency in both electronic and photonic (light or photon) transport.

“Previously, researchers believed that the more disordered a material was, the less effective its electronic transport would be,” says Jiao, a faculty member in the School for Engineering of Matter, Transport and Energy, one of the seven Fulton Schools. “We proved that if the material is in a hyperuniform state, it actually has enhanced electronic transport compared to both crystal and disordered structures.”

When designing a device to interact with electromagnetic waves, it must achieve an ideal “band gap,” a frequency in which the photonic wavelength cannot propagate. Hyperuniform materials have demonstrated a larger bandwidth than other substances, making them ideal materials.

Understanding the network of a disordered system like hyperuniformity has other advantages.

Network theory is a very powerful model for revealing the workings of a variety of different systems, for example, electronic or photonic transport, social networks and the spread of disease. Many of these networks of interest are disordered like the hyperuniform structure. Therefore, using the machinery of hyperuniformity, researchers can better understand the behavior of disordered networks.

To explore hyperuniform structures, the research team has four “thrusts,” or sets of goals, for the MURI project. The first prioritizes further development of theories using the hyperuniform atomic system so these theories can also be generalized to networks.

The team will also evaluate information and energy transport in hyperuniform networks by mapping different physical systems in the networks, using the tool developed in the previous thrust to understand physical systems.

Lastly, the fourth thrust will explore the engineering of hyperuniform networks. Once the team understands the tools for the network and are able to apply these tools to understand different physical problems, they can design better materials and networks that meet the goals of the Department of Defense.

As an expert in both hyperuniformity and network theory, Jiao will participate closely in the development of the network-based analyses and the hyperuniform materials.

Outside of his work with this MURI project, Jiao continues to explore the nature of hyperuniformity. He is working in tandem with his colleague Houlong Zhuang, an assistant professor in the School for Engineering of Matter, Transport and Energy, on atomic hyperuniform materials and generalizing the notion of hyperuniformity to quantum states.

“Traditionally, people consider ‘disorder’ as a defect in materials,” says Jiao. “Now, we have demonstrated that disordered hyperuniform materials can achieve nearly optimal properties compared to their crystalline, or ordered, counterpart. This would suggest a new direction in material discovery and design; instead of minimizing defects, (making) them hyperuniform.”