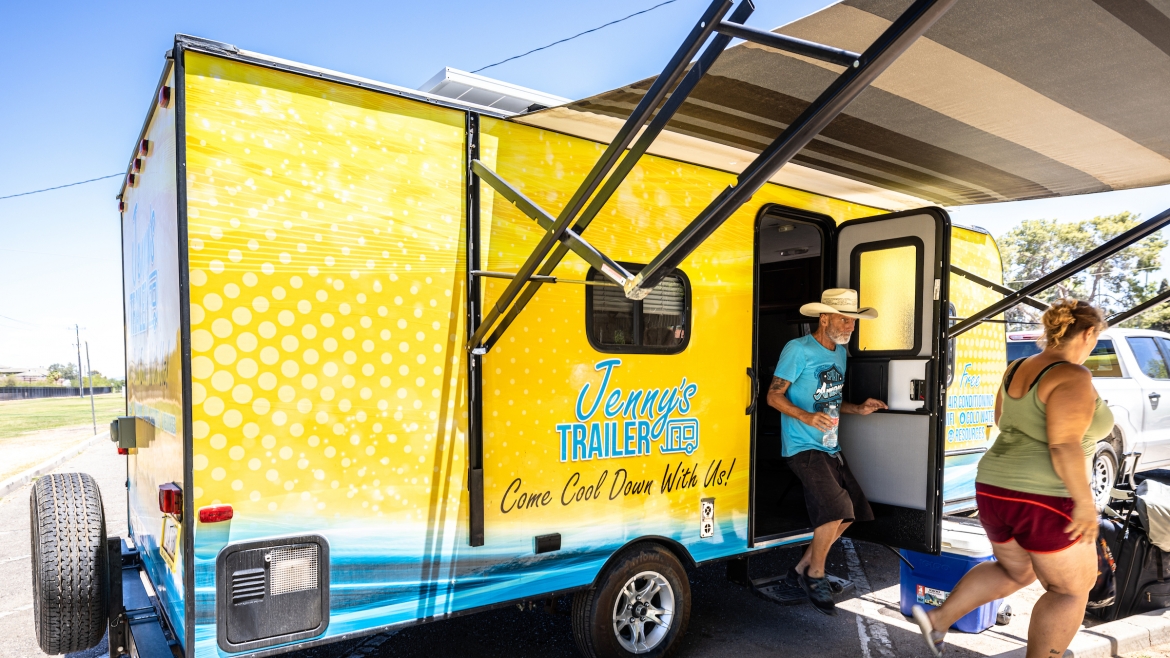 City of Tempe, ASU partner on 'Jenny’s Trailer' to provide space for homeless individuals to cool off during summer

As soon as the white Chevy pickup truck hauling a 20-foot yellow travel trailer wound its way into the parking lot of the city of Tempe’s Daley Park, Kennan Parrish knew he was among friends.

He could cool off, have a drink of water, watch television, charge up his smartphone and experience a touch of humanity. The latter is important to Parrish, who has been homeless for the last two months after a series of unfortunate circumstances, including the death of his longtime partner and getting evicted from his apartment.

“It’s amazing what I’ve learned about being on the street these past two months, but if I could survive my mother-in-law for 34 years, I can get through this,” said the 56-year-old on June 22, a day that featured triple-digit heat throughout the Valley. “Even though we’re homeless, we still have a heart and we still have something to offer. ... This trailer is phenomenal.”

Parrish is referring to Jenny’s Trailer, a new mobile cooling center that is a welcome respite and serves as a place of shelter from the brutal summer heat. It is a collaborative project in partnership with Tempe’s Homeless Outreach Prevention Effort (HOPE) and Arizona State University’s Healthy Urban Environments initiative, which designed the sustainable, solar-paneled trailer.

Staffed by the city of Tempe, the HOPE team travels around city parks and other locations each Wednesday for two hours, offering a safe, comfortable place to cool off and receive cold bottled water. The trailer is a place for people to connect to housing and social services offered by Tempe. It also offers the “milk of human coolness” to a segment of people who are often ignored by society.

“Many of us go about our daily lives and we forget about our unsheltered population, right?” said Geno Morris, who has been a homeless outreach specialist for Tempe for three years and has more than a decade of experience working with homeless individuals. “As we go about our lives, we get in and out of our air-conditioned cars and we go home to our air conditioning. We think, ‘Oh man, it’s so hot,’ and we forget about the individuals who don’t have a home and don’t have a place to cool off.”

In addition to Jenny’s Trailer, Tempe has seven city and community heat relief locations, as well as two sites available on excessive-heat-warning days. The centers offer a place for all residents in need, sheltered and unsheltered, to cool off, hydrate and access services as needed.

Morris said Jenny’s Trailer allows him to develop a special bond with individuals and families experiencing homelessness, who aren’t so quick to trust. During the June 22 visit at Daley Park, some went inside to cool off while others approached slowly. A few grabbed a bottle of water from an ice chest outside the door but never ventured inside.

Parrish said being homeless trains you to sleep with one eye open and to be wary of others until you know their true intent.

“You don’t know who you’re dealing with on the street or what their motives are,” said Parrish, who has already witnessed several overdoses and suicides and has experienced theft. “When I step inside and talk with that gentleman (Morris), I feel like I’m talking to an old friend. ‘What’s going on?’ ‘How’s your day going?’ That means a lot, especially to people who have no one.”

Luckily for Jamie Brenzo, she has someone — her husband Noah. She said they are saving money so that he can test for his Department of Transportation card, something the city is helping him obtain. However, until he is back working full time, they remain homeless.

Brenzo, who hails from Nebraska, was one of about a dozen people in Daley Park who cooled down inside Jenny’s Trailer. Before entering, she grabbed a few extra bottles of water to stay hydrated.

“From opening the door to walking inside the trailer, you can feel the air coming off,” she said, closing her eyes, allowing the breeze to hit her face. “The fact that I can go in, charge my phone and watch a movie is pretty amazing.” 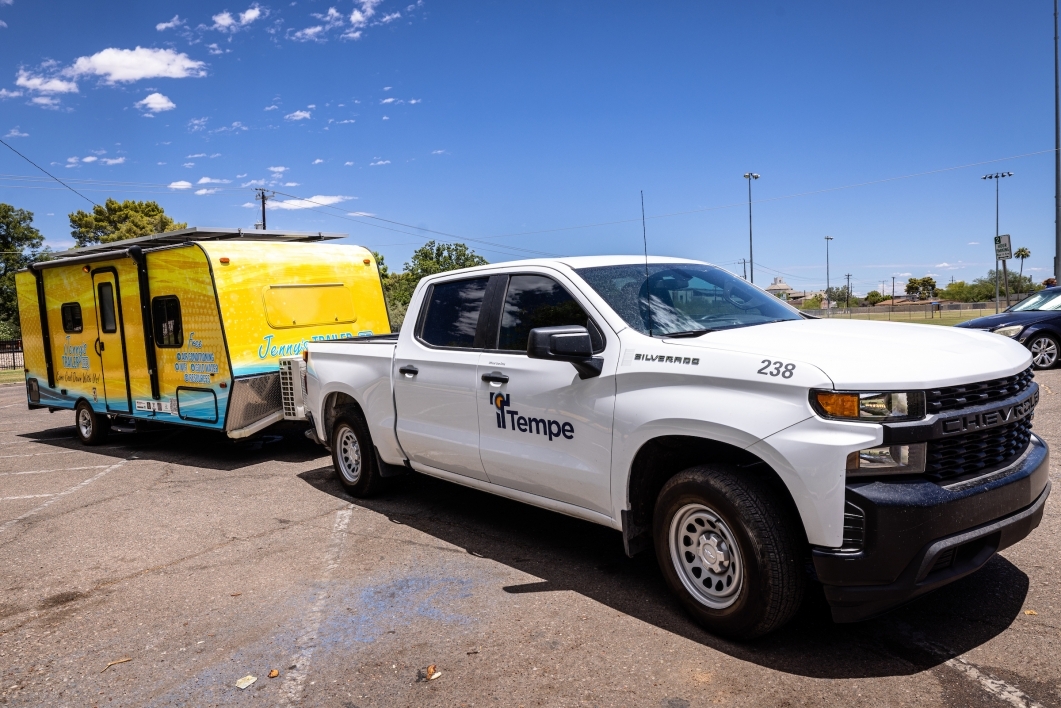 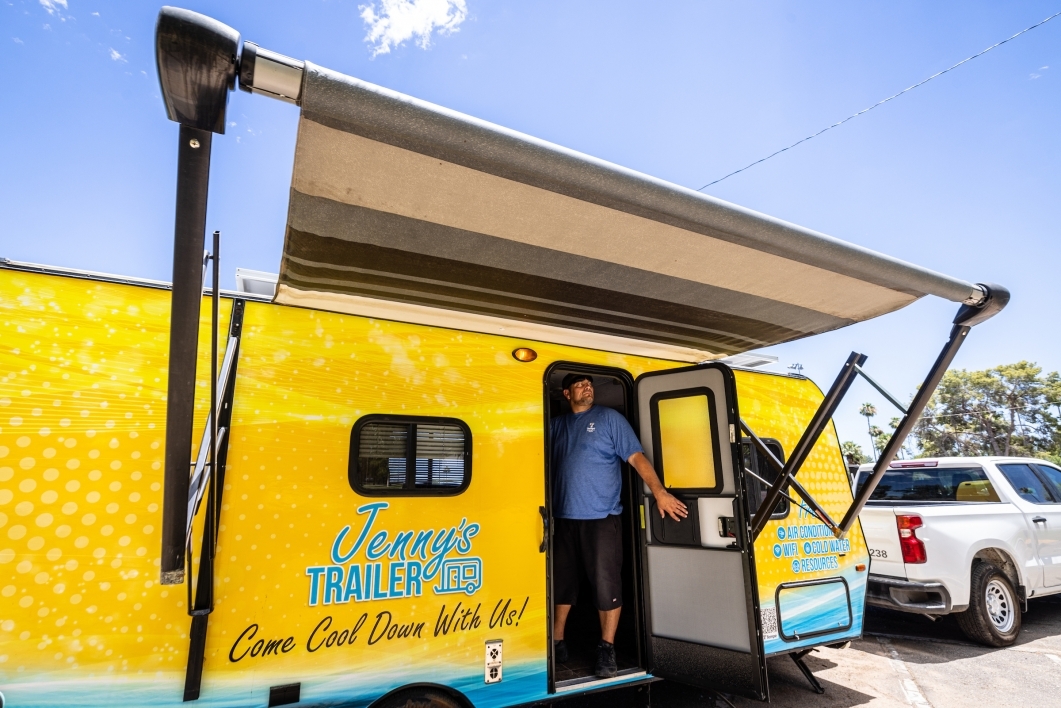 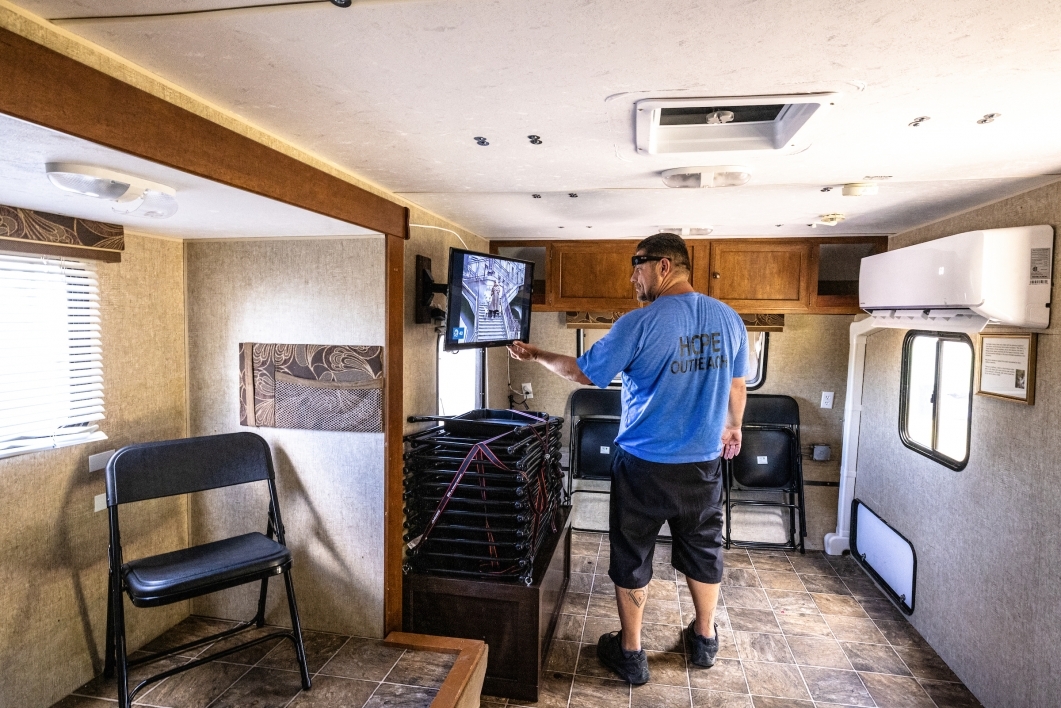 Morris turns on the TV and sets up chairs inside Jenny’s Trailer. 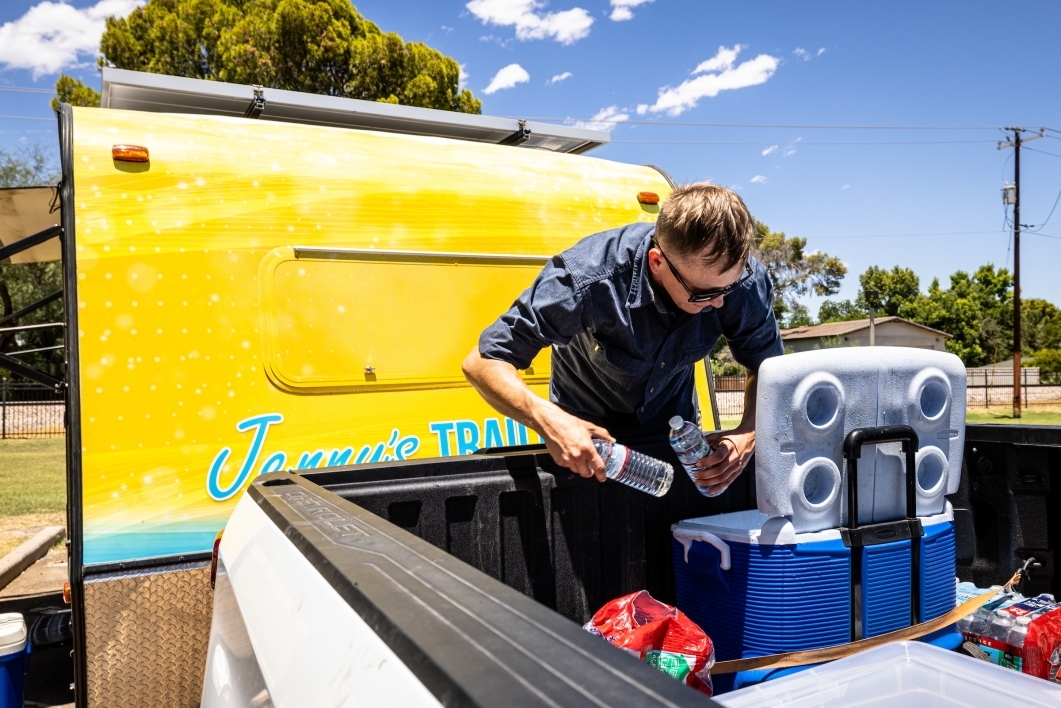 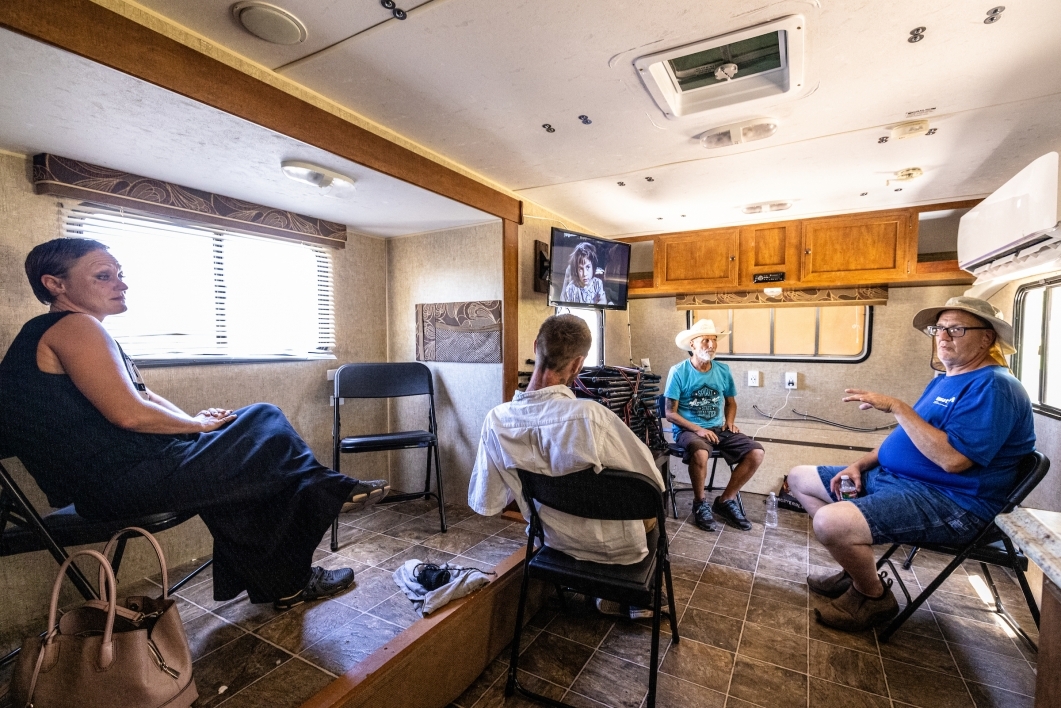 Kennan Parish (right) chats with other homeless people inside Jenny’s Trailer on June 22.

Jenny’s Trailer was named for ASU alumna Jenny Norton, a community advocate for those who are homeless. She funded the project in 2021 with a generous $15,000 donation. According to former Tempe councilmember Lauren Kuby, Norton was inspired to support the mobile cooling center by fond childhood memories of growing up in a South Phoenix trailer park. Schoolmates would often gather at “Jenny’s trailer” to enjoy the park’s common area and pool.

“Jenny Norton is not only a philanthropist but an activist, a humanitarian, and she’s a civil rights pioneer in our state and city, and a former representative,” said Kuby, who is a program manager for ASU’s Stardust Center for Affordable Homes and the Family in the Global Institute of Sustainability and Innovation. “Jenny was also the first person to own an electric car in the state of Arizona, way back in the 1970s.”

Because of Norton’s affinity for sustainability, something she knew she shared with ASU, Norton wanted the university to get on board. That’s when she enlisted the help of ASU’s Healthy Urban EnvironmentsHealthy Urban Environments is a collaborative initiative that combines the power of Arizona State University’s entrepreneurship, research and innovation infrastructure with partnership, support and collaboration from Maricopa County and its communities. initiative, which has partnered with the cities of Phoenix and Tempe on a number of projects to combat urban heat, including finding materials to cool streets, pavement and bus shelters.

Last September, Healthy Urban Environments recruited Engineering Projects in Community Service (EPICS) — a team of students who solve engineering-based problems for charities, schools and other not-for-profit organizations — on the interior design elements for the trailer.

While Parrish is thankful that Jenny’s Trailer will continue to make its weekly runs, he’s hoping that he doesn’t have to see it again anytime soon. Tempe is working to find him permanent housing.

“This little trailer’s going to save a lot of lives,” he said. “And that’s so important, because everybody matters.”

Top photo: Raymond Edmonds and Jamie Brunzo leave Jenny’s Trailer on June 22 at Daley Park. The trailer was designed in part by ASU’s Fulton Schools of Engineering and receives assistance from the Global Institute of Sustainability and Innovation and its Healthy Urban Environments initiative. Photo by Charlie Leight/ASU News

Ryan Johnston admits that he never saw himself as a university student.In fact, 12 days after graduating high school in 2012, he entered the United States Marine Corps boot camp in San Diego, where he trained as a firefighter.After boot camp, he was stationed at Camp Pendleton in California as an aircraft rescue firefighter.“In my first year of service, I was grateful to be deployed to Afghanist...

Ryan Johnston admits that he never saw himself as a university student.

In fact, 12 days after graduating high school in 2012, he entered the United States Marine Corps boot camp in San Diego, where he trained as a firefighter. 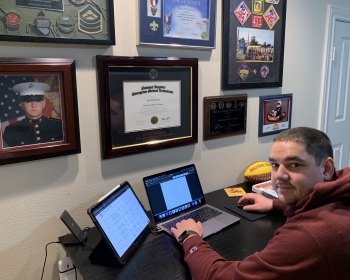 After a career in the military and work as a firefighter, dispatcher and emergency medical technician, Ryan Johnston decided to go back to school. He is an ASU Online student pursuing a bachelor's degree and was in the first cohort of the Barrett Online program. Download Full Image

After boot camp, he was stationed at Camp Pendleton in California as an aircraft rescue firefighter.

“In my first year of service, I was grateful to be deployed to Afghanistan in support of Operation Enduring Freedom,” he said. He finished the rest of his four years in the Marines in the U.S.

After his service, he studied fire technology, prevention and safety at a community college and combined that with his Marine experience to work as a park ranger in Glendale, Arizona, and a firefighter, dispatcher and emergency medical technician in the Republic of the Marshall Islands.

“I never saw myself going to a university. It wasn't until years after my service that I was in my professional career as a firefighter that I decided to utilize my GI Bill and go back to school,” said Johnston, who currently is an online student at Arizona State University working toward a bachelor’s degree in public service and public policy with a concentration in emergency management and homeland security.

The program started last year with 48 upper division students who studied together in a hybrid format, with some sitting in class and others joining online via Zoom. Johnston’s class was in Barrett at the ASU Polytechnic campus. After a successful pilot, Barrett Honors College is continuing its online program this fall.

“I chose ASU Online, as I was working overseas at the time I applied, and saw that ASU had one of the top-ranked online programs. As for Barrett, I was always curious about the program, but there wasn't an opportunity for any honors online courses. It wasn't till I was between sophomore and junior year that I received an email from Barrett saying they were starting an online inaugural program,” he said.

Johnston, a Southern California native, said he is gratified to be able to take university courses online and reap the benefits of Barrett Honors College.

“Barrett has benefitted me in a multitude of ways. The first class I took with Barrett, The History of Ideas, taught by Dr. Mary-Ingram Waters, has made me think much more critically,” he said.

“Another benefit is the multitude of programs within Barrett — everything from cultural development to engineering, and more. If you want to learn about something, you can at Barrett. I've enjoyed this opportunity very much. It has opened a lot of doors that I never even considered before going back to school, let alone attending Barrett,” he said.

Johnston said through Barrett Online he has connected with and developed helpful relationships with faculty.

“I plan on working towards my master’s degree by utilizing ASU’s 4+1 program and also plan to apply for Georgetown’s MPS program in disaster management. In both programs, I will need academic references. Barrett has given me the ability to work with a multitude of professors that truly enjoy seeing their students succeed in our academic goals. I now know many professors who would be glad to write an academic reference,” he said.

What advice does Johnston have for folks like himself who may have been away from academia for a while and are contemplating becoming students again?

“I was unsure about going back to school at first because I had been away from structured education for a very long time. Once I did start going back, I was surprised at how much my life experience was able to benefit me academically,” he said.

“I believe that if you want to earn your degree, you should definitely go back to school, as there are many programs that will help you along the way. I think most people will be surprised at how well they will actually do.”