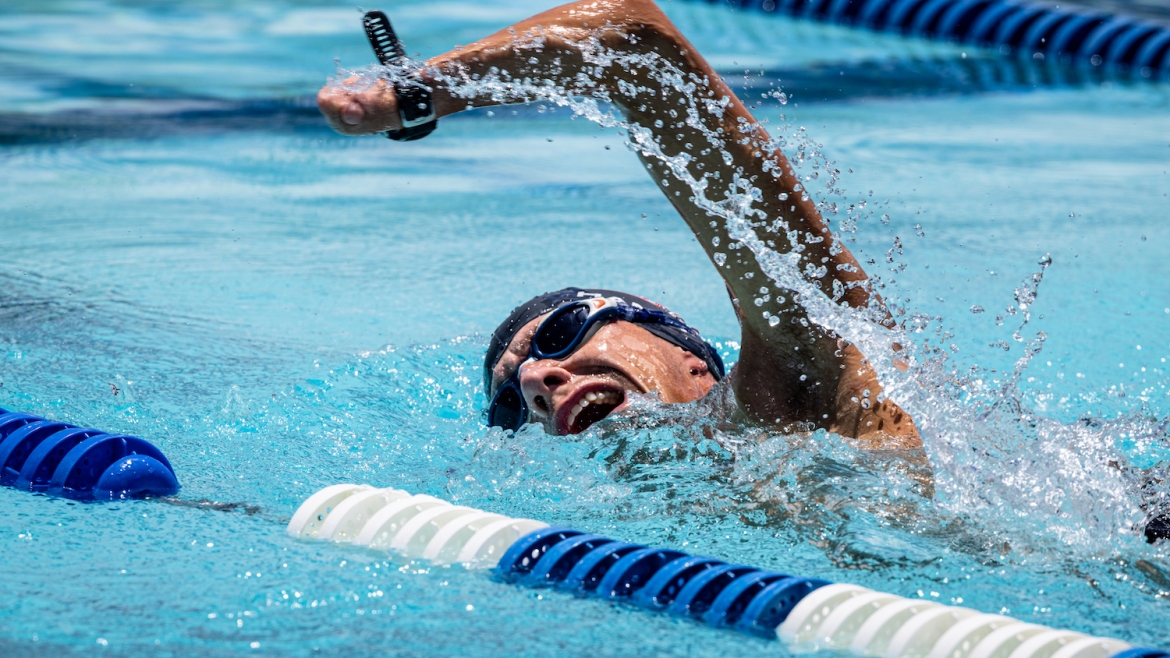 Imagine a four-to-five-hour daily fitness regimen. Wake up at 5 a.m., hit the bike for about two hours, then immediately head out for a run, followed by intensive core and strength training.

By this point, it’s about 9 a.m. and Chris Hammer is still not done exercising for the day.

At lunch time, he’ll hit the Mona Plummer Aquatic Center on Arizona State University's Tempe campus for his daily 60-plus-minute swim. Some days are less intense and focus more on recovery, but this is a day in the life of a professional triathlete.

Hammer, project coordinator for the Academic Enterprise Enrollment team, is new to ASU and to training in the desert, but he is no stranger to competing at elite levels in both sports and academic arenas.

Hammer grew up in Troy, Michigan, where he played baseball, hockey and ran track as an all-star runner. He then went on to become a five-time NCAA All-American, running cross-country and track for Grand Valley State University in Allendale, Michigan.

As far as his academic accolades, Hammer earned a PhD in sport psychology and an MBA from the University of Utah, as well as a master's degree in sport administration from Eastern Washington University.

"Growing up, hockey was my favorite sport, being from Michigan, but I was comparably a much better runner," he said. "I loved to compete, so as I raced, the more I fell in love with it and knew it was something I wanted to do for as long as I could, which in my mind at the time was to run in college."

Hammer was born without his left hand and an underdeveloped left arm, but his parents never let this be an excuse; not in sports and certainly not in life. Sports were so ingrained in his life that he didn’t even know what the Paralympics were until he was recruited.

“I was expected to compete in exactly the same sports at the same level as anyone else, and I was expected to do it as well,” he said. “I really never gave it any consideration. I had no idea that Paralympics or parasport or adapted sport, whatever you wanna call it, even existed. I just played in the regular sport all growing up.”

His dad always told him, “If something's worth doing, it's worth doing right.” This became Hammer’s inspiration and motto to compete professionally as a world-class athlete.

“If I'm going to make the sacrifices to be an athlete, I'm not going to go halfway with it,” he said. “I'm going to do everything I can to be as good as I can be. That's something that I've lived by my whole life.” 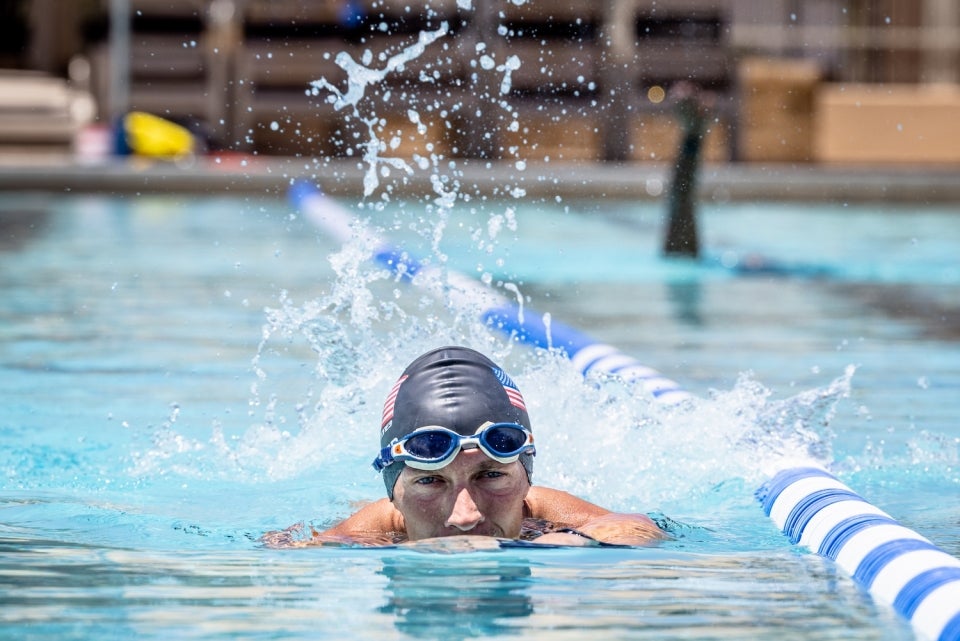 Chris Hammer, project coordinator with ASU’s Academic Enterprise Enrollment, warms up using a kick board for a hard swim workout, on June 23, at the Arrowhead Pool in Chandler, Arizona. Photo by Charlie Leight/ASU News

In 2011, Hammer’s athletic career took off at the Parapan American Games in Guadalajara, Mexico, where he won a gold medal representing the United States in para track. Just one year later, he made the final in the 1,500 meter and competed in the marathon at the 2012 Paralympic Games in London.

Following the London Games, Hammer transitioned to the sport of triathlon. In his nearly 10 years as a triathlete, Hammer has competed in 34 international paratriathlon events, resulting in 25 podium finishes, 11 of which were in first place. He finished on the podium at four world championships and was named world champion in 2021 at the World Triathlon para championship.

While amassing these athletic achievements, Hammer was also teaching sports psychology and coaching NCAA triathlon at Davis & Elkins College, a liberal arts college in Elkins, West Virginia, when the USA Triathlon began to heavily recruit him.

They asked him several times to move to Colorado Springs to train at Team USA’s Olympic and Paralympic Training Center. He never moved to Colorado, but he did compete in triathlons at the 2016 Rio Paralympic Games and the 2021 Tokyo Paralympic Games, where he finished fourth in both games.

“I was six seconds off of the podium; I was just so close,” he recalled. Hammer constantly asked himself what he could do differently. He knew he’d given his all in each race, that he was as fast as he possibly could be by this stage in his career and for a pro athlete his age, but USA Triathlon still courted him, and this time, they asked Hammer to move to Arizona.

Enter Project Podium, a USA Triathlon men's elite development program based at ASU. The decision for Hammer to move to Arizona to train wasn’t without sacrifice. It meant his wife, Amy, would be leaving behind her friends and a job she loved. But Amy knew this opportunity would allow Hammer to attain another athletic career milestone.

Hammer moved to Phoenix metro area in January to begin training with the Project Podium team and start his new position in ASU's Academic Enterprise Enrollment unit. Amy and their two daughters, Peyton and Brooklyn, will move later this summer.

“I was approached by Rocky Harris, CEO of USA Triathlon with the idea of having Chris join our team as he prepared for the 2024 Paralympic Games in Paris,” said Kent Hopkins, vice president for academic enterprise enrollment. “Once I met Chris and learned about his academic and career credentials I knew he would be an incredible asset to the work of Academic Enterprise Enrollment. We look forward to the impact he will make during his time at ASU and will be cheering him on in Paris in 2024.” 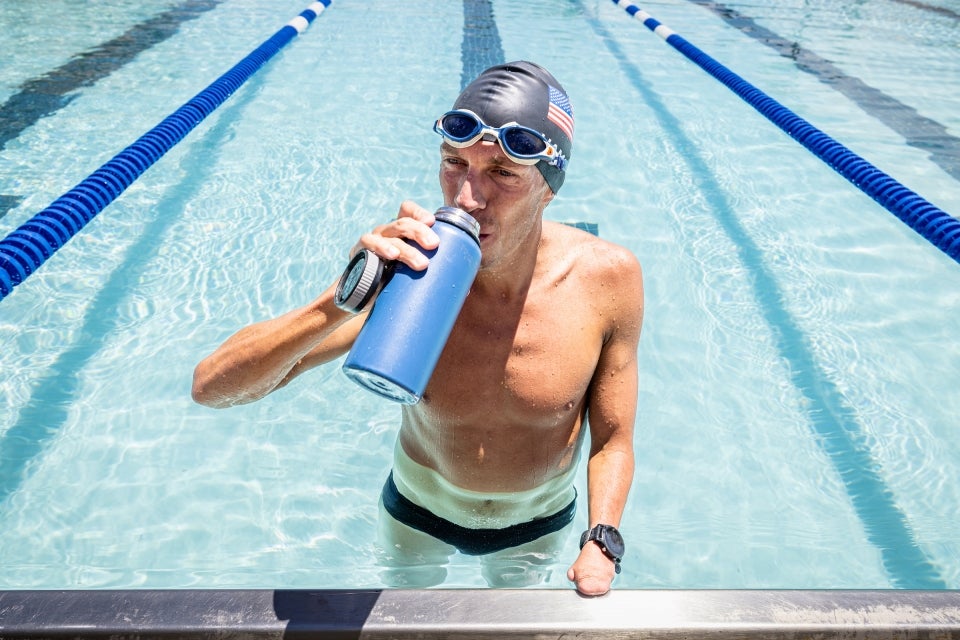 Project Podium Head Coach Parker Spencer said that Hammer is one of the team’s most successful athletes, making him the first paratriathlete to earn a standard USA Triathlon elite license.

“When Chris decided he needed a new training environment to prepare him for the 2024 Paris Paralympic Games, our staff at USA Triathlon felt Project Podium might be the perfect fit for him to further his athletic development,” Spencer said.

In his new role at ASU, Hammer will lead a research study in partnership with the Pat Tillman Veterans Center to measure the impact of implementing a mindfulness-based intervention to enhance well-being among student veteran populations.

According to Jeff Guimarin, executive director of the Pat Tillman Veterans Center, this work is crucial to supporting veteran learners transition from military service to the civilian world at ASU, as well as civilian life in general.

“Anything we can do to help with that process will increase their chances of finding a successful career. And to figure out what we need to do to help, we need to better understand the complexities associated with this demographic,” he said. “So far, we've discovered there isn't a lot of academic research done in this area. As a result, we think Dr. Hammer can make some great strides towards supporting our student veterans."

Hammer’s work at ASU and his spot on the Project Podium roster have allowed him to marry his career passions. As a professional paratriathlete, he’s competed and trained alongside many veterans, who he says inspire him every day.

“They might have had a traumatic injury, and they bounce back to this incredible life,” he said. “But I also know a lot of people aren't so lucky and they're dealing with a lot of things, and I hope this research can, in a small way, help them.”

What’s not so small is Hammer’s preparation for the 2024 Paralympic Games in Paris.

“It really is an honor to represent your country, and it's an honor to be a part of something so much bigger than yourself,” he said.

In recognition of Juneteenth, Sun Devil Athletics hosted a celebration and education session on June 20 at the Student Athlete Facility. ... In recognition of Juneteenth, Sun Devil Athletics hosted a celebration and education session on June 20 at the Student Athlete Facility.