As we age, our bodies deteriorate, making daily life more difficult. Along with physical challenges, the loss of cognitive function, such as memory loss, can also impede performance of basic tasks. From misplacing keys or a wallet to more serious memory issues like forgetting to take medication or leaving the stove on, memory loss is a prevalent issue among older adults.

Troy McDaniel, an assistant professor of engineering at The Polytechnic School, one of the seven schools in the Ira A. Fulton Schools of Engineering at Arizona State University, is using advancements in haptics, wearable technologies, machine learning and sensor fusion to alleviate memory issues in older adults through the use of intelligent, hand-centric, wrist-worn wearables. 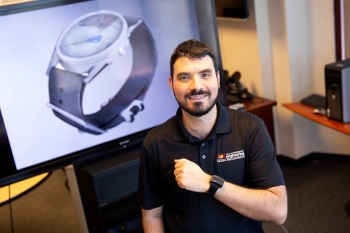 Troy McDaniel, an assistant professor at The Polytechnic School, one of the seven Ira A. Fulton Schools of Engineering at Arizona State University, is pictured on ASU’s Tempe campus at the Center for Cognitive Ubiquitous Computing, or CUbiC, where he serves as the director. He explores the use of intelligent wearable technology to benefit older adults with memory challenges. McDaniel also conducts research at his lab, HAPT-X Lab, at ASU’s Polytechnic campus. Photo by Erika Gronek/ASU Download Full Image

Not many researchers have leveraged a hand-centric view of the world to understand activities of daily living and the associated challenges that affect older adults — making McDaniel’s research unique.

“By 2050, more than 9 billion people will call Earth home, and of those 9 billion people, it’s estimated that 20% will be 65 or older,” McDaniel says. “Such changes will further exacerbate current health care worker shortages and we will be in desperate need of innovative assistive technology solutions.”

McDaniel is actively working toward contributions to gerontechnology — technology to benefit aging adults — to fill that gap and provide the support soon to be needed by a growing elderly population.

So much of human activity revolves around the use of our hands; it’s how we interact with objects in our environment. Through the use of haptics, which is the study of how human senses can propel or be used in conjunction with technology, there are several opportunities to advance assistive solutions.

Much of McDaniel’s research aims to assist older adults, and this project is no exception. Taking into account humans’ heavy reliance on their hands, he began exploring “hand-centric” camera views to aid memory function in this population three years ago.

In McDaniel’s “cognitive augmentation aid,” users load images of their belongings, like keys or a wallet, onto a device that can recognize and recall those images upon request, enabling users to locate misplaced belongings. This is just one of the technology’s many functionalities.

“Think of this device as a personal assistant,” McDaniel says. “Did the person take their medication? Did they pick the correct pill? Did they put it in their mouth? These hand movements were all captured by the camera and can offer important insight to the user so they can continue living independently and maintain their quality of life.”

Wearable assistive technology is also a significant development for older adults who move around frequently to support their health needs. Whether they are at home, in an assisted living facility or in a hospital, the technology is made to move with the user so it can be integrated into a daily routine.

The application potential that can stem from this interactive system, which is made up of “sophisticated software and intelligent algorithms,” is extensive McDaniel says.

“From exercise adherence to compliance and safety, inventory tracking or manufacturing, the opportunities for this core technology are endless,” he says. “The video data collected from the hand-centric cameras specifically are also crucial for other researchers who want to explore the field of haptics, and its use extends beyond just seniors.”

Privacy issues and ethical concerns are at the forefront of the conversation. The technology is designed so data does not leave the device, ensuring data integrity. However, depending upon the application and with the user’s consent, it may be acceptable for video data to leave the device for analysis, for example, when used for rehabilitative therapies or inventory tracking.

In addition to broadening the application outlook, McDaniel has plans to design a new haptics course for the Fulton Schools to allow undergraduate students to explore this pathway. Experiential learning is important to McDaniel, so his course will offer a hands-on haptics kit for students to employ in various course projects. He also plans to develop an introductory haptics textbook for students and researchers new to the subject.

McDaniel says that none of this work would have been possible if it wasn’t for ASU’s interdisciplinary and collaborative research environment. During his undergraduate and doctoral studies in computer science at ASU, he says this was one of the qualities that set ASU apart from other universities.

For this project, he utilized his background in computer science and integrated neuroscience, psychology, human factors, costume design, ethics and more.

“I pulled from all of these areas to build the foundation for my research,” McDaniel says. “ASU presents an ecosystem where I can flourish and I firmly believe this is something I could do only here.”

Looking to the future

Along with refining this technology, McDaniel hopes to change the perception that there isn’t a space for wearable technology among older adults.

In his research endeavors, McDaniel discovered that older adults are open to technology provided it is user-friendly, doesn’t require daily updates, has an easy-to-read interface and maintains privacy and independence.

He has plans to put this technology into action with residents who are interested in participating at Mirabella, an intergenerational, lifelong learning community on the ASU Tempe campus allowing residents to test the new hardware.

With all of this in mind, McDaniel also hopes to improve the device’s accuracy and reliability and pursue licensing and commercialization to get the technology into the hands of people who most need it.

“This innovation will be a game-changer in the wearable technology industry,” he says.

An interdisciplinary team at Arizona State University aims to change this. 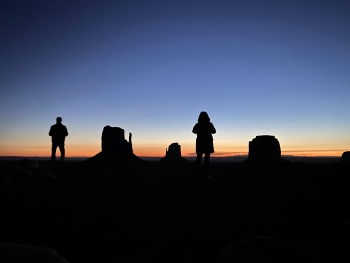 Faculty with a vast array of experience and expertise from the five collaborating ASU programs will provide a comprehensive, state-of-the-science training program that will develop competency in integrated health, behavioral health and opioid and other substance use disorder treatment, with a focus on serving Native Americans.

These trainings will be open to faculty and graduate students from the five collaborating programs, as well as to community providers.

In addition to the training component, this grant includes partnerships with two community providers where psychology graduate students will have hands-on training in assisting Indigenous and underserved populations in the state.

“One of those locations that our students will be working in is located in Navajo Nation. We also have a Native American consultant for the grant who will be helping us navigate how we provide culturally competent services that improve the trust with the health care system among the Native American population,” said Matthew Meier, clinical associate professor and co-director of clinical training. Meier is also the director of the new online master’s degree in addiction psychology launching in fall 2022.

“Through the learned experiences of research and maintaining positive collaborative relationships with tribes, it is imperative that tribal understanding is developed and maintained. Most importantly, ensuring that tribal sovereignty and respect to cultural and traditional practices is adhered to,” said Valaura Imus-Nahsonhoya, the founder and executive director of Honwungsi Consulting Services.

ASU is partnering with the Canyonlands Healthcare Agency, a community mental health agency, that has local clinics, primary care, as well as integrated behavioral health in the north and east areas of Arizona. This facility has been designated as a Federally Qualified Health Center and is supported by federal grants under the U.S. Public Health Service Act.

Additionally, the department is partnering with Solutions of Sobriety, which has an existing contract with Indian Health Services to provide substance abuse, recovery, housing, outpatient and intensive inpatient care.

“The goal for this grant is to train psychologists to do integrated health. We are providing behavioral health services in primary care settings, as well as opioid and other substance use disorder treatments. Additionally, the training provides experience with telehealth treatment for populations that have been traditionally unable to access treatment,” Meier said.

“One major goal of this grant is to expose trainees to rural settings and provide training in culturally competent care, which will increase the likelihood that they will provide services in these rural communities in the future. This is a major challenge to encourage licensed professionals to move into isolated communities to solve that treatment gap,” Meier said.

“Telehealth now opens a whole new avenue to get services into underserved areas without having to move professionals into these small communities."

“The HRSA grant will allow us to develop and disseminate a state-of-the-science training to a broad range of students, faculty and community providers, as well as increase access to culturally competent psychological services for Native Americans,” Meier said.