Bonobos, which share 99% of their DNA with humans, have a reputation as peaceful creatures because of their socio-sexual behavior and nonviolent interactions among different bonobo groups. Some researchers, however, have challenged this idea because of a lack of detailed data on how these groups interact and how they maintain a separation. 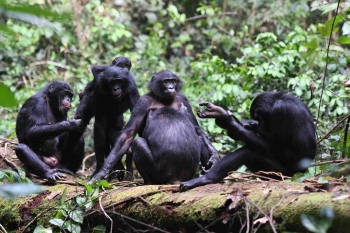 Bonobos grooming each other in a group. Photo courtesy of Martin Surbeck Download Full Image

The research, published in the Proceedings of the National Academy of Sciences, shows that four neighboring groups of bonobos, studied at the Kokolopori Bonobo Reserve in the Democratic Republic of Congo, maintained exclusive and stable social and spatial borders between groups, showing that they are part of distinct social groups that interact regularly, but peacefully, with each other.

The work sets up bonobos as an evolutionary model for how humans developed their capacity for tolerance and cooperation among different social groups.

“The finding that bonobo groups are much more cohesive and clearly defined than are chimpanzee neighborhoods suggests that the peaceful interactions observed between bonobo groups are indeed meaningful,” said Langergraber. “Knowing this about bonobos helps us better understand how peaceful interactions between human groups could have evolved — a process that is harder to imagine if all you have as a model is chimpanzees, whose groups are invariably hostile.”

Langergraber is a research scientist with ASU’s Institute of Human Origins and an associate professor with the School of Human Evolution and Social Change.

The study is a result of three consecutive years of observing the bonobo community in the Kokolopori reserve, from 2017 to 2019. Previous research showed evidence of the 59 bonobos forming four separate groups that routinely cross paths to interact, groom each other and share meals. What hasn’t been clear is if these bonobo groups work more like the chimpanzee subgroups that form within one larger community.

“It was a very necessary first step,” said Samuni, a postdoctoral fellow in Harvard’s Pan Lab and the paper’s lead author. “Now that we know that despite the fact that they spend so much time together, (neighboring) bonobo populations still have these distinct groups, we can really examine the bonobo model as something that is potentially the building block or the state upon which us humans evolved our way more complex, multilevel societies and cooperation that extends beyond borders.”

In chimpanzee populations, which are highly territorial and hostile to different communities, primatologists refer to these subgroups as neighborhoods. Essentially, members of these subgroups don’t spend all their time together as part of one large group but are all still part of it, maintaining relationships with each other and (most importantly) not battling each other when they meet.

Bonobos are far less studied than chimpanzees due to political instability in countries where there are groups to observe and additional logistical challenges of reaching those groups in the wild.

“There aren’t really behavioral indications that allow us to distinguish group A from group B when they meet,” Samuni said. “They behave the same way they behave with their own group members. People are basically asking us, 'How do we know these are two different groups?' Maybe instead of those being two different groups, these groups are just one very large group made up of individuals that just don’t spend all their time together (like we see with chimpanzee neighborhoods).”

To get at the answer, at least two observers from the Kokolopori Bonobo Reserve followed each bonobo group daily from dawn to dusk, recording behavioral data and location data that was then analyzed.

The researchers primarily looked at how much time individual bonobos spent together to gather data on whom they prefer to associate with and how, and also when and how they associate with other bonobos outside those main associations. This helped the researchers perform a statistical method called a cluster analysis.

Essentially, they saw which bonobos shared significant associations with each other, which ones tended to come together for meals more often, which ones tended to stick together when faced with a choice of whom to go with, and who interacted more in the same home range. This helped them draw clear distinctions between which bonobos are part of the same group and when members of one group are having peaceful interactions with neighboring groups across one another’s borders.

The bonobo data was then compared with data collected on 104 chimpanzees that lived in the Ngogo community in Uganda’s Kibale National Park between 2011 and 2013.

The researchers found the bonobo clusters were overall more consistent and stable versus subgroups of chimpanzees. This means that the bonobos within each of these clusters have a strong and mutual social preference toward hanging out with one another, much stronger than seen within chimpanzee subgroups.

For research on the Kokolopori bonobos, these observations helped the researchers not only confirm the four groups — the Ekalakala, the Kokoalongo, the Fekako and the Bekako — but also come up with a reliable way to predict which bonobos are most likely to stick together when the different groups of bonobos meet and separate.

The results show that bonobos, like humans, are capable of more complicated relationships outside their immediate core network.

Now that it has been firmly established that these bonobos have distinct groups, researchers want to explore what cooperation and trade look like between the groups and if it can potentially represent what it looked like in our common ancestor. This would help explain how humans, to an extent, overcame antagonism between different groups and developed peaceful cooperation.

Martin Surbeck, who founded and directs the Kokolopori Bonobo Research Project, said that the window to gaining these powerful insights is closing as bonobos near extinction.

“There are very few left,” he said. “We are gathering information that potentially will not be available anymore in 50 years if things continue the way they do.”

For humans, exposure to adversity early in life, and the negative social effects that may result, increase our susceptibility to illness and an early demise.ASU primatologist Joan Silk, along with ASU doctoral graduate Sam Patterson and researcher Shirley Strum, turn to our primate cousins — female olive baboons — to understand the elemental behaviors that shape the processes connecting early ...

For humans, exposure to adversity early in life, and the negative social effects that may result, increase our susceptibility to illness and an early demise. 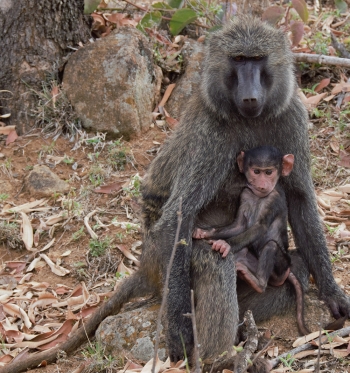 Their research, published this week in the Proceedings of the Royal Society B, demonstrates that female baboons who experience more adverse circumstances very early in life (i.e., during their first year of life) develop less benign interaction styles and weaker social bonds with others as adults.

“Baboons are an ideal study system for examining links between early life adversity, temperament and sociality,” said Silk, a Regents Professor in the School of Human Evolution and Social Change and research scientist with the Institute of Human Origins. “The females tend to remain in the same group throughout their lives and develop strong and supportive relationships with selected female partners.”

The analysis used behavioral data on 31 female olive baboons from three groups in Laikipia, Kenya. The researchers evaluated the links between early life adversity, interaction styles and female sociality. For baboons, early life adversity includes evaluations for environmental conditions in the year they were born, group size at birth, early loss of mother, the interval between successive births of the mother, and whether the individual was the first child of the mother.

Interaction styles among baboon females are measured as the tendency to utter quiet, low frequency calls — called grunts — as they approach another baboon. Grunts play an important role in negotiating social interactions because they function as honest signals of benign intent and are associated with lower levels of aggression and high levels of social connectedness. Baboon females with a baby grooming each other. Photo courtesy Joan Silk

An interesting result of this research is that early life adversity had a stronger effect on behaviors directed toward another female than behaviors initiated by the individual.

“Because adversity influenced their interaction style, it seems to impact social connectedness via multiple pathways, including physical condition and social attractiveness," said Patterson, who graduated with a PhD from ASU in 2021 and is now a postdoctoral scholar at New York University. "Females who are ‘nicer’ — by approaching another female with benign grunts — form stronger social ties and are more likely to be approached by others than those who are less ‘nice.’”

This work ties together threads from previous work that established links between early life experiences and adult sociality, temperament and sociality, and sociality and fitness in baboons. It is significant because it shows how unfavorable experiences early in life can have lasting influences on development and well-being throughout the life span.

The research article, “Early life adversity has long-term effects on sociality and interaction style in female baboons,” by Sam K. Patterson, Shirley C. Strum and Joan B. Silk, can be accessed online at https://royalsocietypublishing.org/doi/full/10.1098/rspb.2021.2244.