Arizona State University’s New College of Interdisciplinary Arts and Sciences celebrated its largest-ever graduating class this spring, with 1,285 students receiving bachelor’s and master’s degrees. Of these graduates, 780 completed their degrees through ASU Online.

On May 12, New College welcomed online grads and their friends and families to celebrate their accomplishments at a pre-convocation reception. Over 350 grads, friends and family members attended the reception from across the country and the world. 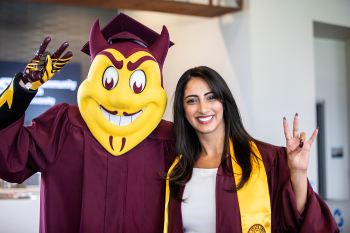 For many of the online grads who attended, it was the first time they met faculty, staff and their online peers.

“Innovation looks like what you’re experiencing today and what you’ve experienced for the past four years. Many of you who I’ve spoken to have said the last several years have been really, really hard. The world changed in a way that none of us could’ve predicted,” Todd Sandrin, dean of New College and vice provost of ASU's West campus, said in his remarks during the reception.

“When the pandemic hit, we forged on — you forged on. You kept going.”

Jessica Alyea, a military veteran who received a master’s degree in forensic psychology, and her son traveled from Germany to attend the reception.

The spring 2022 convocation was the first graduation ceremony Alyea had ever attended. 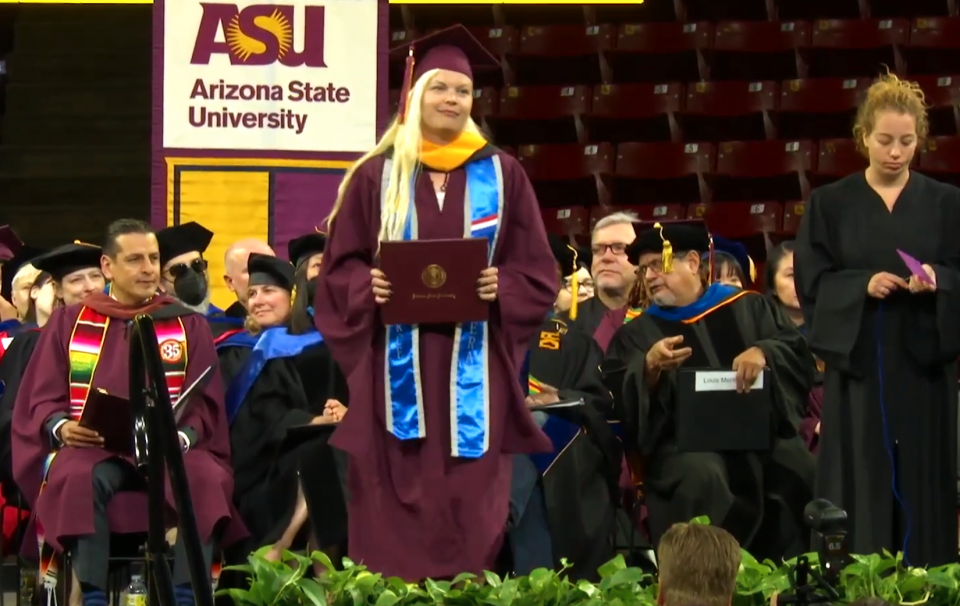 Jessica Alyea poses for a photo as she walks the stage at New College's spring 2022 convocation. She and her son traveled from Germany for graduation.

Alyea said she was amazed at the community she found at ASU — something she hadn’t experienced since her time in the military.

“It was a huge milestone. It was something I always wanted to do, and it meant a lot to me,” Alyea said. “I had always wanted to experience a ceremony for myself, to see what it is like to walk the stage.

“Going to school at ASU gave me newfound confidence. It gave me a sense of purpose. Being awarded my degree, hearing my name called and being able to walk the stage was an emotional experience for me because before that it didn't really seem real. I think I needed that validation for myself. It was also important for me to show my son that no matter what life throws at you, if you put your mind to it, you can accomplish anything.” 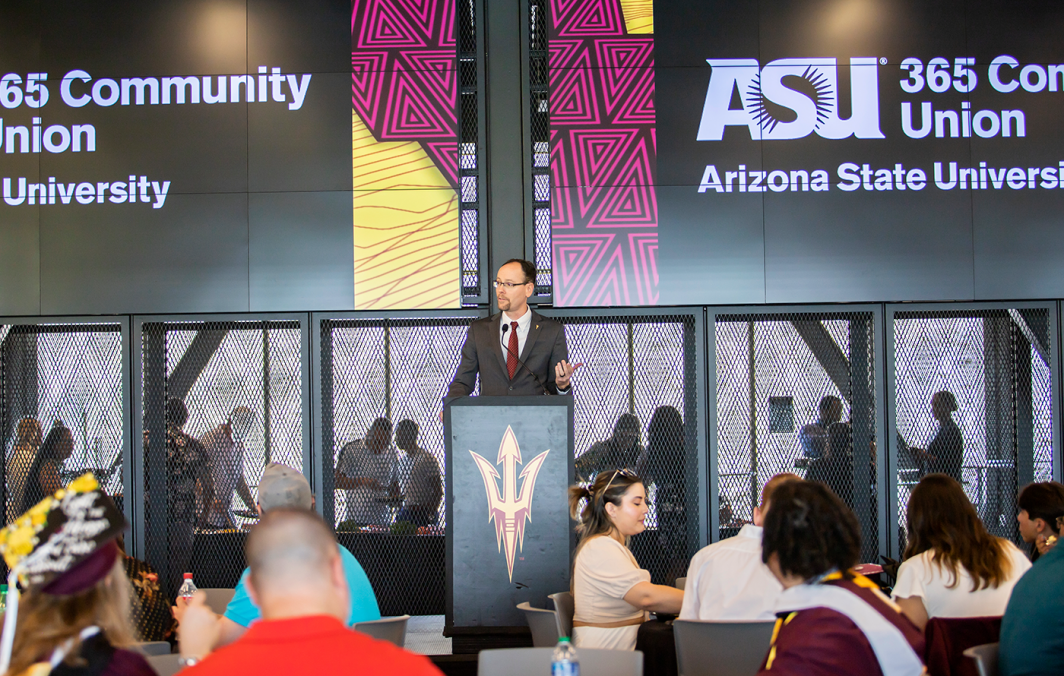 Dean Todd Sandrin speaks to grad Alexandra Fagan and her family at the online reception. 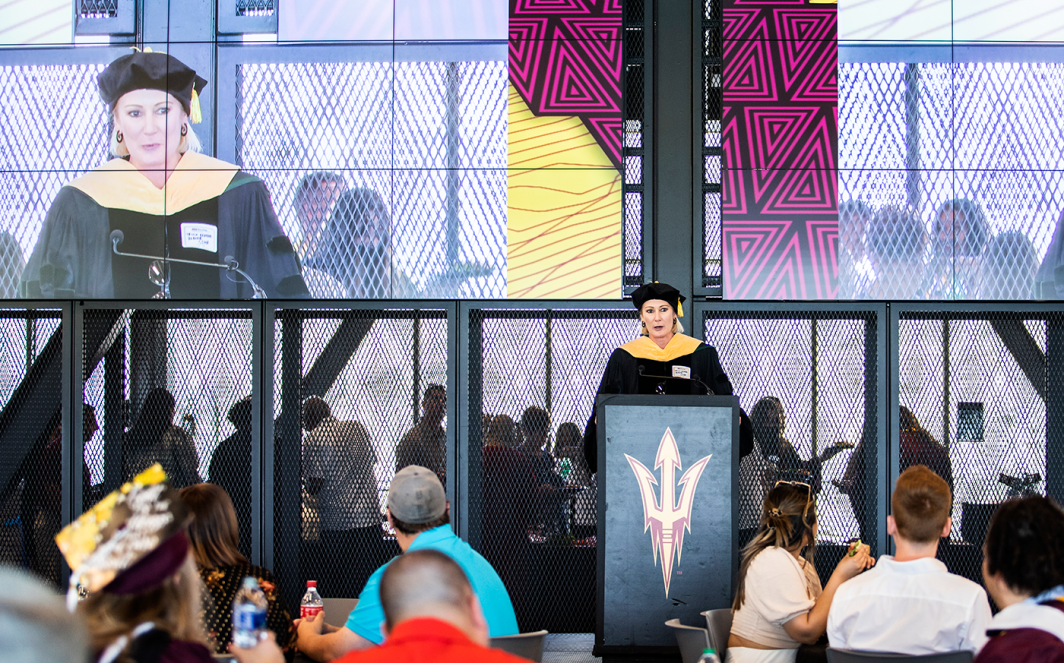 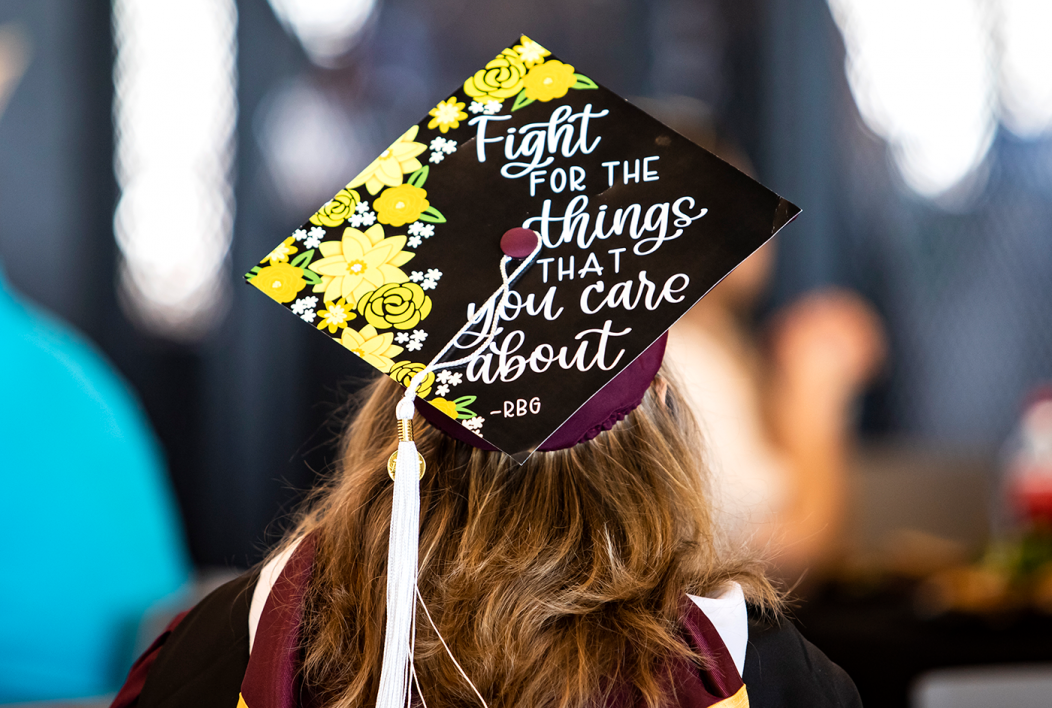 A grad's cap at the online gradution reception.

The experience was also emotional for first-generation grad Alexander Castillo, who attended the reception with his brothers and his parents. Castillo, who traveled from Boston, received a master’s degree in social justice and human rights.

The new ASU California Center hosted the first Media Summit of the Americas on Tuesday, a global journalism conference that drew a top government official and a major whistleblower, as well as Latin American journalists who work under threat from their own governments.The new California Center is a perfect place for a journalism conference because it’s in the Herald Examiner Building, which used...

The College of Liberal Arts and Sciences , School of Politics and Global Studies , Politics , Alumni 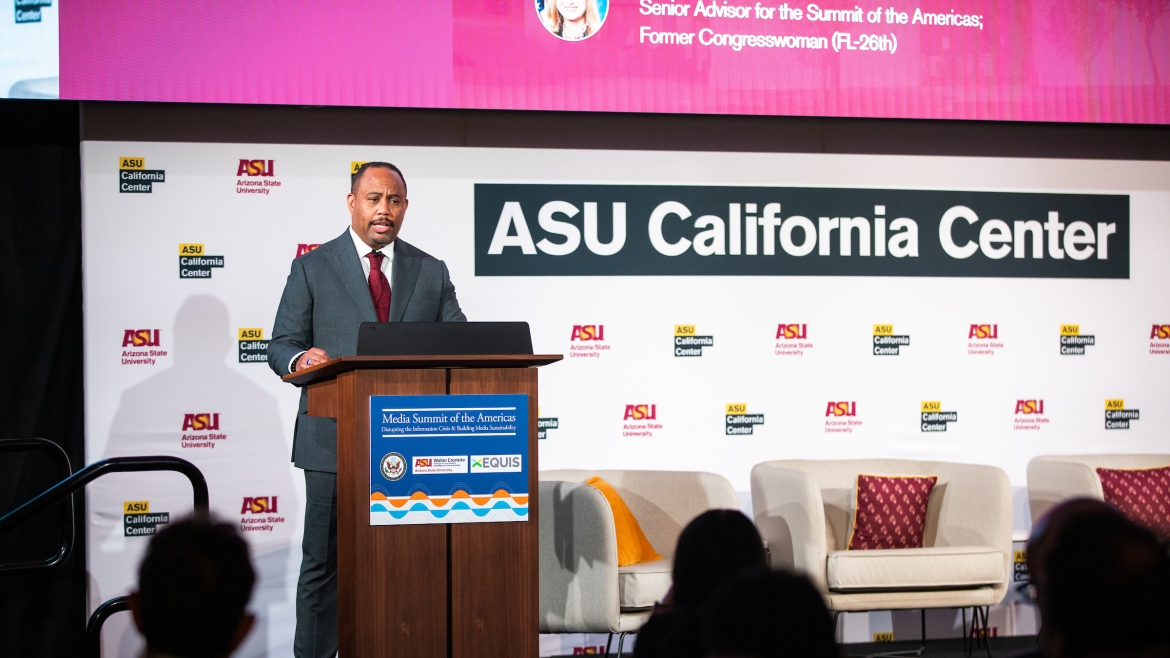 The new ASU California Center hosted the first Media Summit of the Americas on Tuesday, a global journalism conference that drew a top government official and a major whistleblower, as well as Latin American journalists who work under threat from their own governments.

The new California Center is a perfect place for a journalism conference because it’s in the Herald Examiner Building, which used to house one of the top newspapers in the country, said Battinto Batts Jr., the dean of the Walter Cronkite School of Journalism and Mass Communication. The Cronkite School hosted the conference in partnership with the Equis Institute, a hub for leaders in the Latino community working to increase civic participation in American democracy.

“Where we are gathering is a former press room for the Herald Examiner,” Batts said, asking the crowd to visualize the presses running during the newspaper’s heyday. The building sat vacant after the Herald Examiner went out of business in 1989, and ASU spent four years renovating the structure in downtown Los Angeles.

“We are leaders in the fight against mis- and disinformation,” he said. “We couldn’t be more thrilled to be the platform to discuss this global threat.

RELATED: Secretary of state emphasizes value of a free press at ASU-hosted event

Roberta Braga is the director for counter-disinformation strategies at Equis. She said that the conference was intended to discuss the broader ecosystem of disinformation.

“If we’re all living in an era where we can’t even agree on what truth is and we’re all consuming information in silos, then we’re in a moment of time — and our research has found this — where we’re too unsure to believe or too exhausted to get engaged with information, and both of those things are problematic for democracy,” she said. Facebook whistleblower Frances Haugen was one of the speakers at the Media Summit of the Americas, hosted by the Walter Cronkite School of Journalism and Mass Communication on Tuesday at the ASU California Center in downtown Los Angeles. Photo by Deanna Dent/ASU News

One of the conference speakers was whistleblower Frances Haugen, a data engineer at Facebook who released internal documents that she said showed how the social media giant’s algorithms prioritized hyperpartisan content and hate speech.

Haugen said that people think of Facebook as a way to connect with friends and family.

In the early years, Facebook’s goal was to increase time spent on the site. But the company realized that higher engagement created more content, and emotional content drives more engagement.

“The shortest path to a click is anger,” she said. “The angrier the comment thread, the more it gets reshared.”

Algorithms don’t show everyone the same content, she said.

“Eighty percent of the COVID disinformation in the United States only went to about 4% of the population.

“For the part of the population in that 4%, post after post after post was ‘Your children are in danger.’ And it’s a rational response if all you’re seeing is ‘Your child is in danger,’ wouldn’t you show up at a school board meeting and threaten a teacher if that’s all you saw?”

This is critical because in some parts of the world, Facebook is more than social media — it’s actually the internet. In some countries, Facebook subsidizes people’s data when they use the platform, while they must pay for the data if they visit sites on the open internet.

Haugen said that after the initial frenzy of attention over Facebook’s algorithms, it seems that nothing has changed.

“But we’ve already seen some amazing steps forward,” she said, noting a children’s privacy bill in the Senate that has bipartisan support. “I think there will probably be a web-free, Facebook-like site that will come along that will be owned by its users,” she said.

While Haugen’s revelations were horrifying, she remains optimistic.

“Every single time we invented a new kind of media, it’s been super disruptive,” she said.

The printing press unleashed the first era of disinformation.

“You had people printing pamphlets on how your neighbors were witches,” she said.

“Until we wrestle with it and until we push for something that works, it will feel chaotic. But we’ve done it before and we can do it again.”

WATCH: What it was like to be part of the summit

The Media Summit of the Americas featured several other sessions, in both Spanish and English:

The Media Summit of the Americas also hosted a talk by U.S. Secretary of State Antony Blinken, who described efforts by the U.S. government to support independent journalism in the Americas. 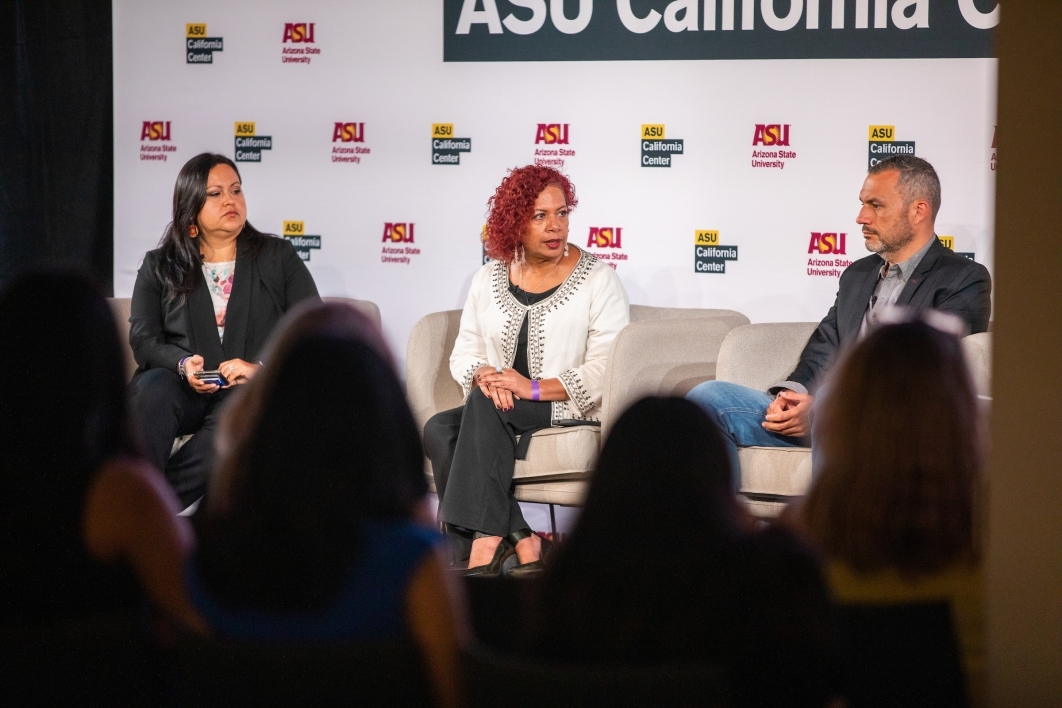 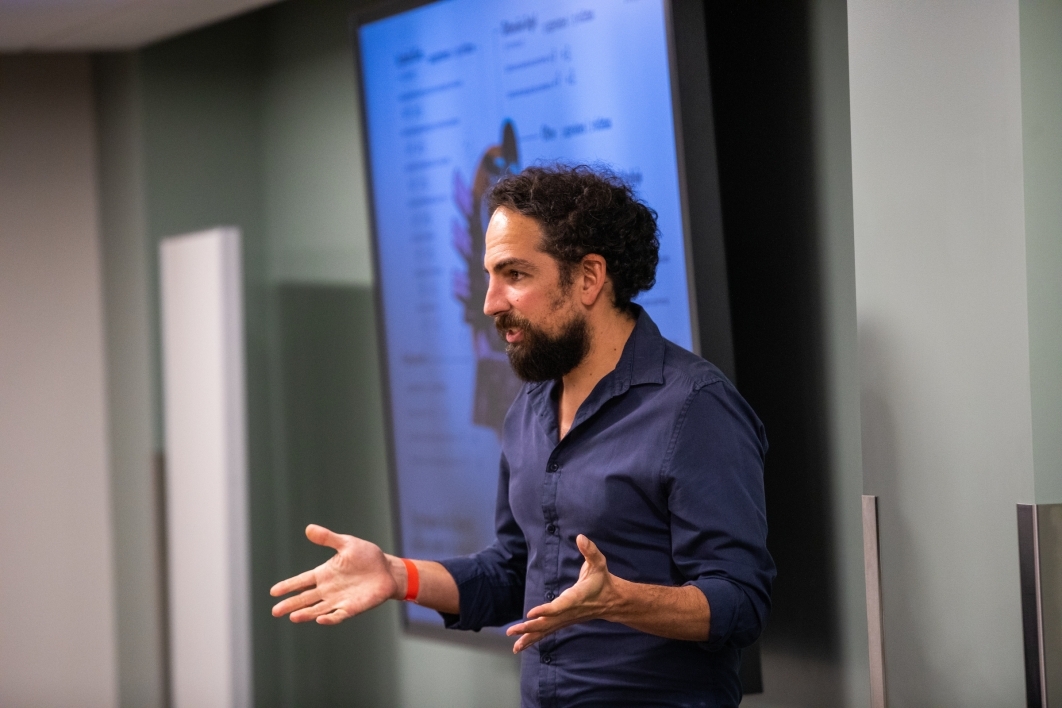 Jonathan Bock Ruiz, executive director of the Foundation for the Freedom of the Press, spoke at a session titled “Reporting Under High Stakes: The Effects of Disinformation, Violence and Censorship on Coverage of Elections, Migration, Natural Disasters, Pandemics and Protests" at the Media Summit of the Americas event at the ASU Calfornia Center. 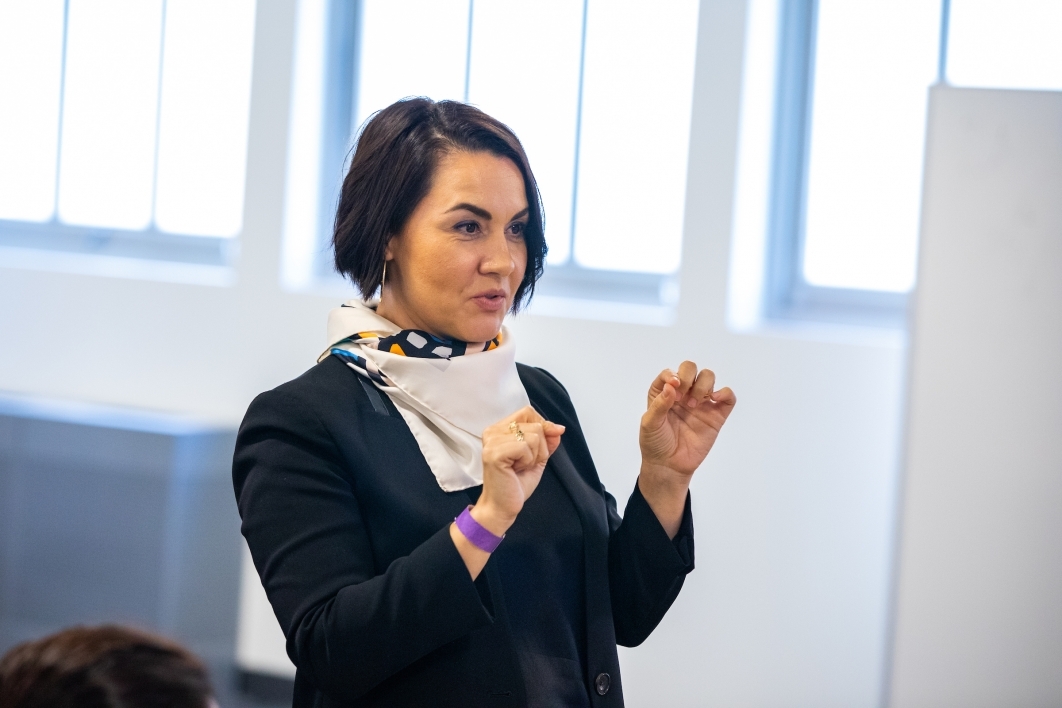 Nora Benavidez, an adjunct professor at ASU's Cronkite School and senior counsel and director of digital justice and civil rights at Free Press, leads a breakout session titled “Data Privacy, Transparency and Platform Accountability: Spanish and Portuguese-language Gaps and Solutions" at the Media Summit of the Americas on Tuesday in LA. 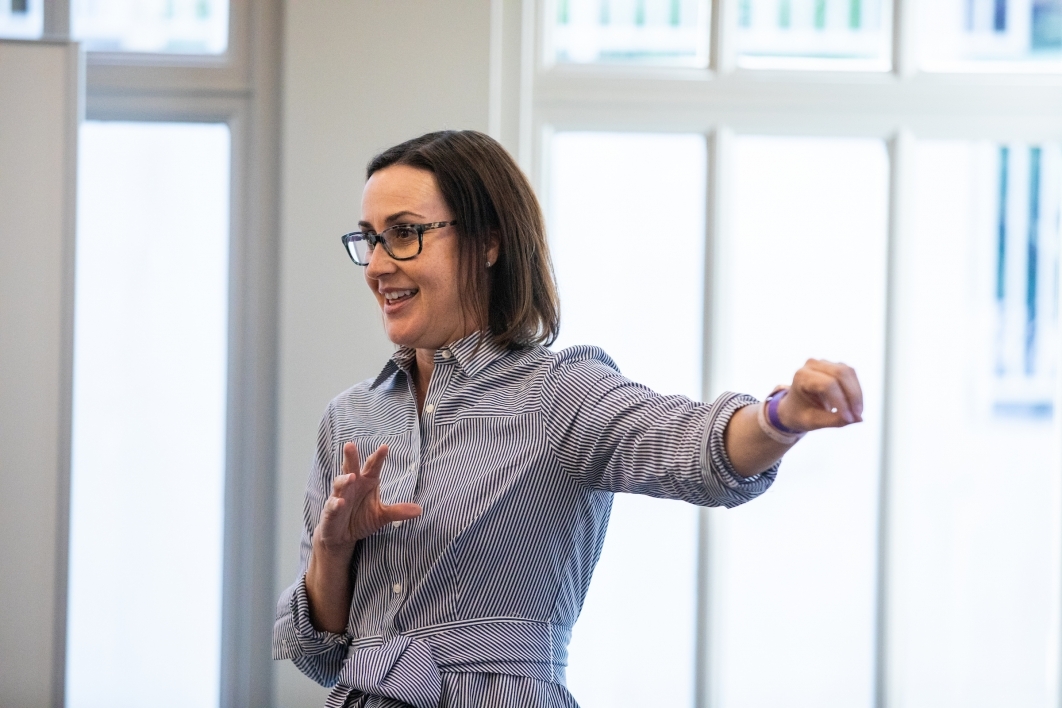 Blinken participated in a Q&A with two current students and one graduate of the Cronkite School. He said he was inspired by them.

“I am so glad that you’re doing this, as I’m dead-serious about the proposition that this lies at the heart of our democracies. And as goes journalism, as goes a free media, so go our democracies,” he said.

Top photo: Battinto Batts, dean of the Walter Cronkite School of Journalism and Mass Communication, said on Tuesday that the ASU California Center was the perfect place to host a journalism conference because it's the former home of the Herald Examiner newspaper. Photo by Deanna Dent/ASU News