Teenagers who talk about drugs with friends are more likely to abuse drugs later in life, according to a new study.

The research, published in the Journal of Psychopathology and Clinical Science, was a collaboration between Arizona State University and Radboud University Nijmegen in the Netherlands.

“How adolescents talk to each other sets standards, or norms, that can predict future behavior. This study shows that positive conversations about drugs and alcohol — like how fun it is use cannabis or drink, admiration of other kids’ use, or discussing places/homes where you can drink — as a 17-year-old predicts future severe use and being diagnosed with a substance use disorder 10 years later,” said Thao Ha, assistant professor of psychology at ASU.

This work used data from a long-term study testing the effectiveness of the Family Check-Up, which is an evidence-based intervention designed to better the lives of children by supporting and educating caregivers. This data set was based on a wide-ranging assessment of a teenager’s environment and included evaluating a teenager’s relationships with friends.

The research team analyzed 10-minute conversations between 497 pairs of 17-year-old friends. They tracked how the teens talked about alcohol, cannabis or hard drugs, including whether the conversation was positive or negative towards drugs and alcohol and also how long they talked. Then, the team assessed whether those conversations were related to the teens being diagnosed with a substance use disorder in the next 10 years.

“This study shows how important it is to listen and observe to what adolescents have to say, rather than making them fill out questionnaires. What they talk about is important to them and is predictive of later behaviors,” said Roy Otten, a professor of psychology at Radboud University Nijmegen.

Discussing hard drugs at age 17 was weakly related to future use, and this finding could be because the rate of use of hard drugs is lower than alcohol and cannabis.

A cascade of peer influences

The still-developing adolescent brain is susceptible to addiction — and is especially attuned to social information, like what peers care about. Interactions with peers can steer teens towards thinking that drug or alcohol use is benign while also connecting them with peer groups who endorse drinking or drug use.

“These types of peer interactions can create a cascade effect — they can start a process in motion that then leads to other processes — resulting in behaviors in adolescence that increase the risk of later problem use of alcohol or drugs,” Otten said.

This study was based on in-person conversations between pairs of friends that were video recorded at a time when social media use was not as prevalent as it is presently. Today, many teenagers interact with each other online through social media. Ha said the understanding of how kids influence each other’s substance use when interacting online is in its infancy, and more research is needed.

“We think the digital social media world could create an even bigger peer influence than conversations with a friend. Social media is very public — with its likes and views — but also private that is available all the time, day and night,” Ha said.

Top photo: Research published in the Journal of Psychopathology and Clinical Science has shown that teenagers who talk positively about drugs and alcohol are more likely to be diagnosed with drug or alcohol use disorders in the future. Photo by Eliott Reyna/Unsplash

Arizona State University Associate Professor Michael Varnum was recently announced as a 2021 Association for Psychological Science Fellow.Varnum is an evolutionary social psychologist and primary investigator for the Culture and Ecology Lab, where he conducts research on cultural variation and the causes of cultural change.  The Culture and Ecology Lab focuses on how cultural patterns may be unde...

Varnum is an evolutionary social psychologist and primary investigator for the Culture and Ecology Lab, where he conducts research on cultural variation and the causes of cultural change. 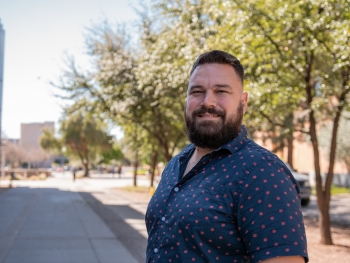 Associate Professor Michael Varnum was recently announced as a 2021 Association for Psychological Science Fellow. Varnum was previously named a Rising Star by the association in 2016 as an early career recognition for outstanding researchers who are advancing the field forward. Download Full Image

The Culture and Ecology Lab focuses on how cultural patterns may be understood as responses to changes in basic ecological conditions (i.e., population density, pathogen prevalence or resource scarcity). His work hasn’t been limited to these topics, though. Varnum has studied everything from the importance of mate selection and kin care to how we may respond to the presence of alien life.

“There's been a number of different kinds of questions I've looked at, but most of them have really tried to focus on this question of thinking about ecology and its relationship to culture,” Varnum said.

Fellow status is awarded to Association for Psychological Science members who have made sustained outstanding contributions to the science of psychology in the areas of research, teaching, service and/or application, and additionally have at least 10 years of postdoctoral service. This status is typically awarded for the recipient's scientific contributions, but may also be awarded for exceptional contributions to the field through the development of research opportunities and settings.

Varnum was previously named an Association for Psychological Science Rising Star in 2016 as an early career recognition for outstanding researchers who are advancing the field forward.

Varnum was also recognized this spring as part of a 43-person cohort of fellows from across the world, including peers like Azim Shariff, an associate professor from the University of British Columbia, who presented a research colloquium for the department last fall.

While the Rising Star award might have predicted this honor, it was incredibly validating for Varnum to receive this next award.

“It’s a huge honor to be recognized with this designation. Earlier I was looking up other members of the faculty at ASU who had received this award, and they are all giants in the field — Steven Neuberg, Robert Cialdini, Nancy Eisenberg, Doug Kenrick, Dave MacKinnon, Steve West and Leona Aiken,” said Varnum. “To even have my name on that list is amazing.”

The impact of seasons

When asked about his current research, Varnum described a systematic review aimed at understanding the role of the seasons on human psychology. When thinking about factors that cause variation in human behavior, psychologists often think about the role of factors like personality, development or culture. But one source of variability that’s often overlooked is that of seasons.

“There’s lots aspects of the human experience that are familiar — so familiar, in fact, that we don't actually think about them in a scientific sense, and one of these is the impact of seasons on our psychology,” Varnum said.

Our understanding of many non-human species includes an emphasis on seasonal effects on their behavior — brown bears that hibernate during the winter, or sockeye salmon that swim upstream for thousands of miles in the fall to spawn and die. Yet we tend not to pay much attention to seasonal aspects of human nature.

“Humans show not only physiological changes over the course of the year but also interesting psychological and behavioral changes in everything from mood to mating behavior to preferences for different colors and types of music,” Varnum said.

“All of these things show a kind of seasonal variation and fluctuation. We're investigating how there might be a hole, so to speak, in our picture of human nature having to do with the seasonality of our minds. One with implications for everything from the replicability of psychological findings to patterns of cultural variation.”

Responding to the pandemic

While undergraduate students in spring 2020 had their worlds turned upside down, many young faculty members did as well, and Varnum was no different.

“I think when this all hit, and especially early days of lockdown, like a lot of people I was really scared. I felt really helpless; the world seemed to be spiraling out of control. But one of the things I knew how to do was to think about and try to study the pandemic’s impact. It actually turned out to be a golden opportunity,” Varnum said.

Varnum and his colleagues were awarded an NSF Rapid Response Research Grant to study how the pandemic affects prejudices that arise from the behavioral immune system — the psychological mechanisms that allow individuals to detect the potential presence of infectious diseases or pathogens in their immediate environment and avoid them. One negative consequence of this behavioral immune system can be an increase in prejudice. The extent to which COVID-19 might have shaped changes in various kinds of prejudice is something the team is currently preparing for publication.

Together with his longtime collaborator Igor Grossmann, Varnum also helped lead two large-scale efforts to assess the ability of psychologists and other social scientists to accurately predict how the pandemic would affect societal trends.

“It turns out we weren’t very good at predicting how things like levels of political polarization, depression or violence might unfold over the course of the pandemic,” Varnum said. “This was true in studies when we asked for more spontaneous predictions and in formal forecasting tournaments where teams had time and past data to build models.

“I think an important step toward more accurate models of the human mind and social dynamics is assessing to what extent can we actually predict things in the real world — are psychologists’ intuitions actually any good? Are our formal forecasts any better? Realizing that psychologists typically aren’t any better at this kind of thing than the average person — and that generally, neither group is very accurate — should be a wake-up call.

“It may be that our understanding is really bounded by the sort of controlled environments of our studies and experiments. I think we could benefit from stepping outside of the lab more often to test our theories.”