International student team recognized for its success through adversity

When members of the team that built the Quetzal-1 CubeSat watched their satellite take off on a SpaceX Falcon 9 rocket in 2020, it was the culmination of six years of hard work, overcoming financial and personnel hurdles, and challenging cultural barriers.

That hard work and ingenuity has garnered the team the CubeSat Delivery Prize award through Arizona State University's Interplanetary Initiative. The award is just the latest step in the team's remarkable journey. 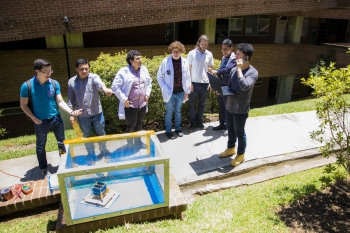 Members of the Quetzal-1 CubeSat team test their satellite. The team, based at Universidad del Valle de Guatemala, undertook the project despite having no infrastructure, no industry experts at the university and no history of launching small satellites from that country. Download Full Image

In 2014, a team based at the Universidad del Valle de Guatemala (UVG) decided to undertake an aerospace project despite having no infrastructure to do so. There are no graduate programs in aerospace in Guatemala and no history of launching small satellites from that country, and there were no industry experts at the university.

Two years before the team decided to build a CubeSat, they started with a more modest CanSat — a soda-can-size simulated satellite launched to a few hundred meters — but they were confident in their ability to think bigger.

“It seemed like a really challenging project. The natural step would have been choosing to make a high-altitude balloon after the CanSat. But we were really confident in the work we did on the CanSat. We were really happy with the results, so we decided to take a higher risk and get into CubeSats,” said Jose Bagur, the head of hardware on the project who was an undergraduate student when the project started.

A CubeSat is a class of miniature satellites roughly the size of a loaf of bread.

The team started working on the project in different laboratories and the UVG cafeteria. There was no lab space that could be dedicated to a project like this so they looked for somewhere with a lot of electrical sockets. Still, morale was high among this early group.

“The first year with the first group of students, we were motivated because we were doing something new and learning a lot,” said Victor Ayerdi, the co-director of the project.

However, as time went on and the possibility of a successful completion for the project remained uncertain, student recruitment became more difficult.

“At one point, one of the students said, ‘No, I want to do my senior project on something I know is going to be done, not on something that is not going to be done.’ There was simply not enough motivation to do it because a lot of people didn’t trust that this was going to be possible, and, to be honest, we couldn’t say, ‘Yes, we’re going to do this, we’re going to finish’ at that point because it was difficult for us to see the future,” Ayerdi said. “It was like that for three years. After three years, it was getting harder to continue because the motivation was difficult.”

Two years in, funds to complete the project had also become a challenge. The team started looking for funds in 2016. They attracted one donor who gave $5,000, which barely made a dent in what they needed, and their applications to several other funding competitions were unsuccessful. Finally, their fortunes turned.

“The main reason we could continue was because we applied at the beginning of 2017 to the KiboCUBE program of the United Nations Office for Outer Space Affairs and JAXA,” Ayerdi said. “At that point, after three years of work, we had a design of a CubeSat. It needed a lot of improvement, but we had a design.

“One of the criteria to apply was that the country had never launched a CubeSat into space and the country hadn’t had the capability to do it, so we were the ideal candidate. We were selected as winners, and that changed the history of the project because before KiboCUBE it was difficult for us to convince students that this was going to be possible.

“After we were announced as winners, we had a waiting list of students who wanted to be involved in the project. That was nice because it gave us the credibility that was difficult to have before that.”

The KiboCUBE award gave the team the opportunity to deploy Quetzal-1 from the International Space Station and covered the cost of transporting the satellite to the space station, but money for CubeSat components was still an issue. They set out to gather public support.

They pitched a series of articles to the one of the biggest newspapers in Guatemala, Prensa Libre. The newspaper staff threw its full support behind the team, incorporating infographics and multimedia elements into the articles. The team published 55 articles over two years.

“One of the most impactful articles came out in Women’s Day magazine. We had few women, which happens in engineering, and at that point we realized we could also use the project to motivate women to study engineering because even though they were few in the team, maybe 10%, they were really enthusiastic and motivated,” Ayerdi said.

It was also through these publications that the project got its name. The newspaper ran a “name the satellite” contest. The winner was a high school student who suggested the name quetzal, which is the national bird of Guatemala and a symbol of goodness and light.

Because of these publications, word of the project reached the UK Space Agency, which offered to cover the costs of some of the testing. The team also received support from several other international and national organizations, and UVG covered the remaining 30% of the costs. 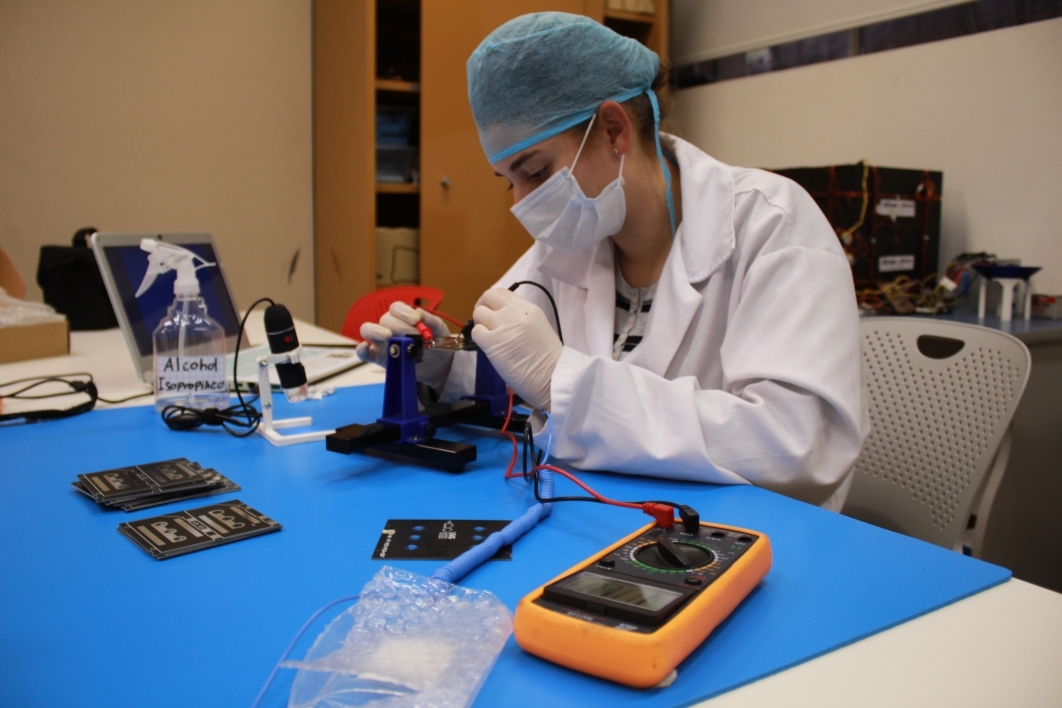 A team member works on the Quetzal-1 CubeSat, which was deployed from the International Space Station in April 2020. 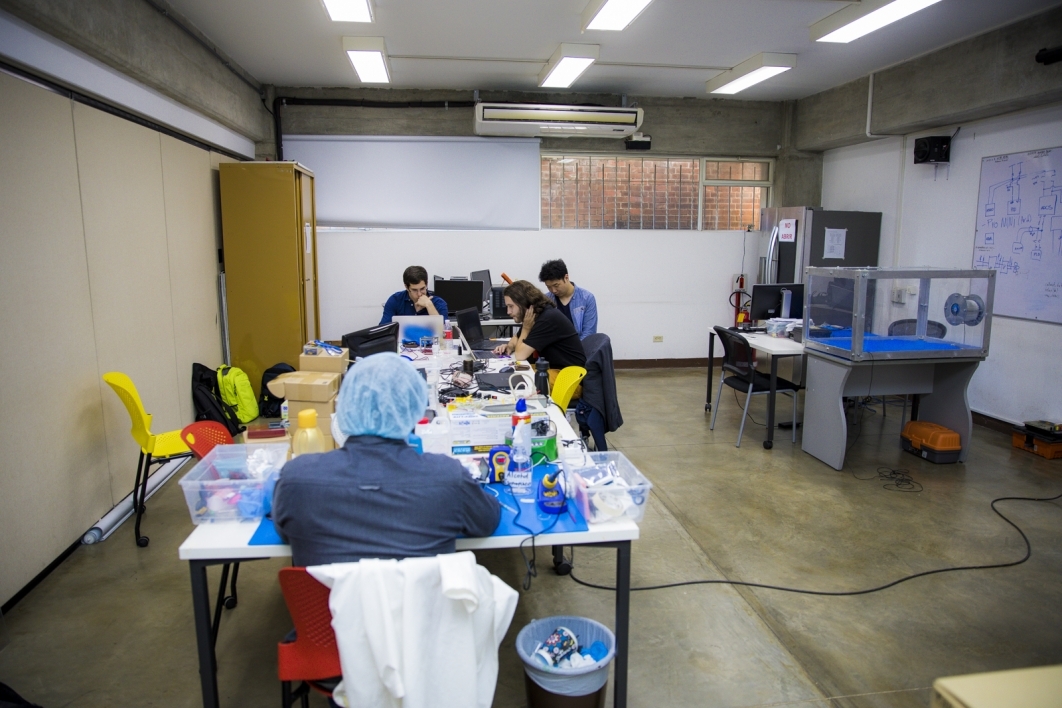 The Quetzal-1 team works in their laboratory at the Universidad del Valle de Guatemala. When the project began, the team worked out of different laboratories and the UVG cafeteria, as there was no lab space that could be dedicated to a project like this. The university now has an aerospace lab and infrastructure in place so students can carry out similar projects. 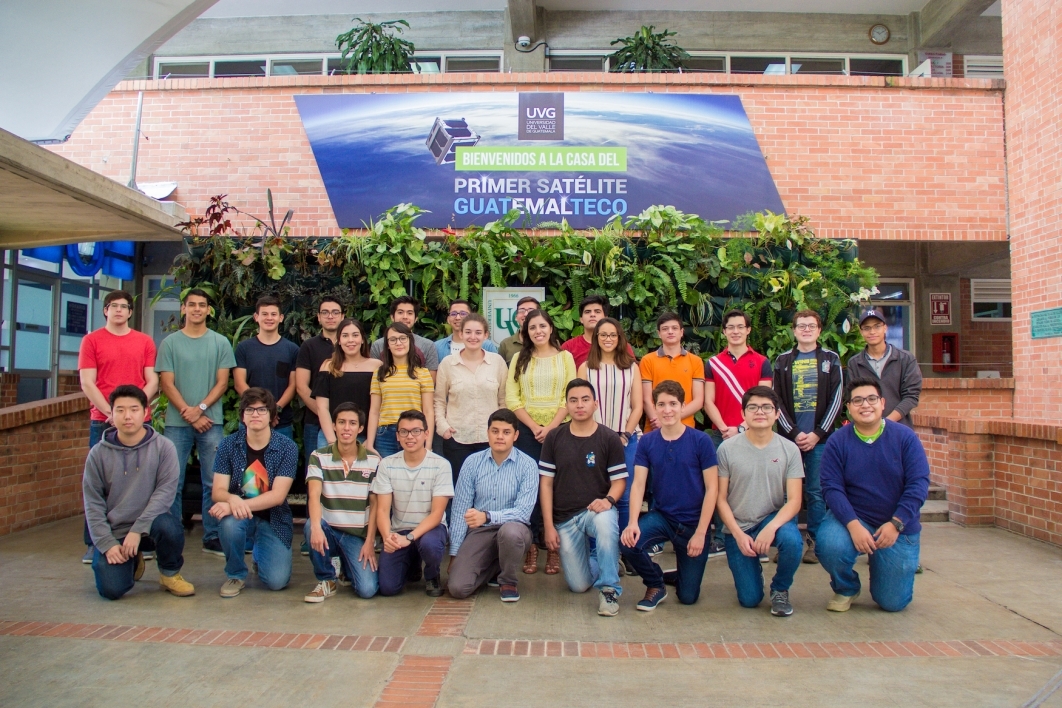 The Quetzal-1 team poses in front of UVG. Thanks to outreach efforts to the Prensa Libre newspaper, which would publish 55 articles over two years about the project, the wider community across the nation followed along on the progress and became fans. There were celebrations when it was sent into space, and some bars showed the launch on their TVs. The Quetzal-1 CubeSat. A CubeSat is a class of miniature satellites roughly the size of a loaf of bread or a shoebox. The goal of the team's satellite was to develop a sensor with four light filters, which were selected to capture chlorophyll-a concentrations with remote sensing.

Three years into the project, the original students were graduating from their programs, leaving the team trying to come up with a system for transferring the knowledge to the next generation of students working on the project. Until this point, there was no culture of documenting processes among team members.

“That was one of the biggest challenges and lessons learned from the project. We got better as years passed,” said Dan Alvarez, ADCS (attitude determination and control system) and operations leader of the project, who started on the project as an undergraduate student.

“Usually the way we made it work was that students would work on the CubeSat for their last year of university. During the first half of that last year, they would work on research and whatever they had to do for their respective research projects or subsystems, and the second semester they would continue working on that, but they would also meet with the incoming team for the next year to start to pass on the new information and let them know what the next steps were.

“We started to create a lot of internal documentation where we talked about every subsystem that was being developed.”

The method the team adopted is now routinely taught at UVG.

The team was trying to develop a sensor with four light filters, which were selected to capture chlorophyll-a concentrations with remote sensing. The team ran out of time to finish the coding, but the satellite was still able to position one filter, capture the images and return the carousel of filters to the initial position.

Throughout the project, the team was fighting against a stigma of failure they say is prevalent in Guatemala.

“In Guatemalan culture, failure is a real issue, so fighting against the thoughts of failure was the hardest part, but when we started just letting go and working on things, I think that’s when magic happened and that’s why we had a satellite in space,” Bagur said.

Luis Zea, co-director of the project, described their strategies for fighting that mindset in the community.

“One of the ways we tried to combat the stigma around failing was just trying to communicate to people, particularly the people of Guatemala in general, what we were doing and how hard it was and how valuable and interesting it was in the simplest terms possible,” Zea said. “The main thing we did with that was the publications in the newspaper about the project. We really tried with those short articles to give people a general sense of what we were doing.”

After winning the KiboCUBE award, the U.S. embassy in Guatemala provided funds to bring CubeSat experts to Guatemala to check the team’s design and final integration of the CubeSat. Those professionals helped the team gain perspective.

“The big lesson that most of the people who came gave us was that failing was just an integral part of the process and failing said nothing about you personally, just about how hard the problem you have to solve is. Trying to get that into our minds was a very important step towards not giving up,” Alvarez said.

By the time Quetzal-1 launched in 2020, the whole country had been following along with its story in the newspaper for two years.

“There were a lot of people here in Guatemala that were really happy about it,” Bagur said. “I’m so impressed because there were bars where they put the launch on their TVs. In Guatemala something like that is unique. It was one of the best days of my life. It was really cool. Watching the rocket reaching out to space was a magical moment, and it was one of the greatest moments in Guatemalan scientific history so far.”

Quetzal-1 launched to the International Space Station in March 2020 and stayed there until April 2020, when it was deployed. An hour after deployment, the team saw the first information being transmitted and knew the CubeSat worked. It was operational in space for 211 days.

Gone are the days of students working in the cafeteria of their university. UVG now has an aerospace lab and infrastructure in place so students can carry out similar projects. On a national level, policy discussions are underway due in part to this project.

The team was awarded $7,500 through the ASU Interplanetary Initiative’s CubeSat Delivery Prize award thanks to the generosity of the Shojaee Foundation. The prize money will be the first funds for Quetzal-2 and will likely go to the solar panels for the next project.

Sun Devil Tennis' top freshman absolutely dominated in year one with the Maroon and Gold ...