The partnership sought to honor and celebrate the school’s 100th anniversary through different projects that included planting 100 trees, collecting oral histories from school faculty and alumni, and diorama building. 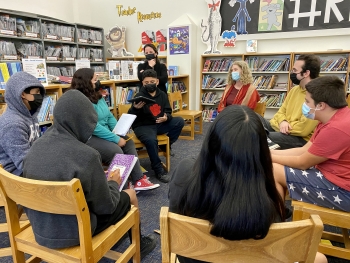 The Design and Arts Corps, which is within the Herberger Institute for Design and the Arts, is an integrated, community-engaged design and arts program that engages in direct and ethical partnerships and collaborations with communities through design-and-arts-based programming.

The project's main goals were to promote “a sense of belonging in the Emerson community and encouraging the current students at Emerson to understand the legacy of the school,” according to the leader of the project, Kristina Friedgen, a graduating MFA student from the School of Music, Dance and Theatre and graduate student artist-in-residence for the Design and Arts Corps.

“I would say that building that trust and connection between Arizona State University's team and the students and faculty at Emerson was a major success of this project,” Friedgen said. “It should set up future projects to make a lot of progress toward those two bigger goals.”

“Seeing both the middle schoolers and college students learn from each other and create something together made the complications all worth it,” Friedgen said. “I'm also very proud of the interpersonal growth and connection made by all of the students involved.” 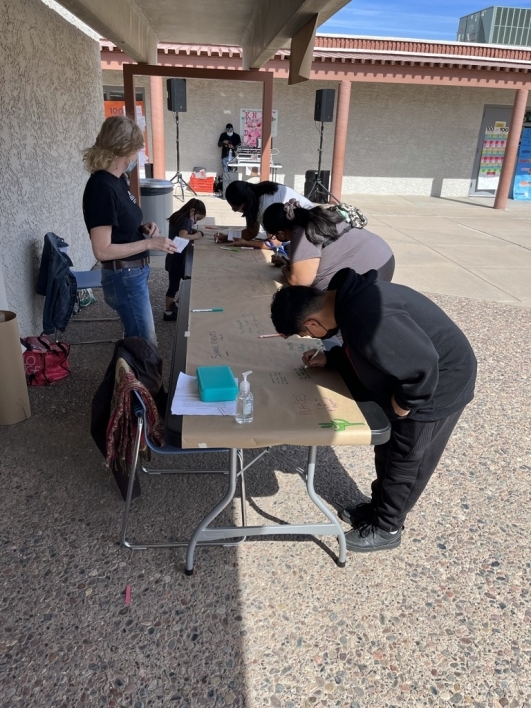 Emerson students participate in an activity during the day the project planted 100 trees. 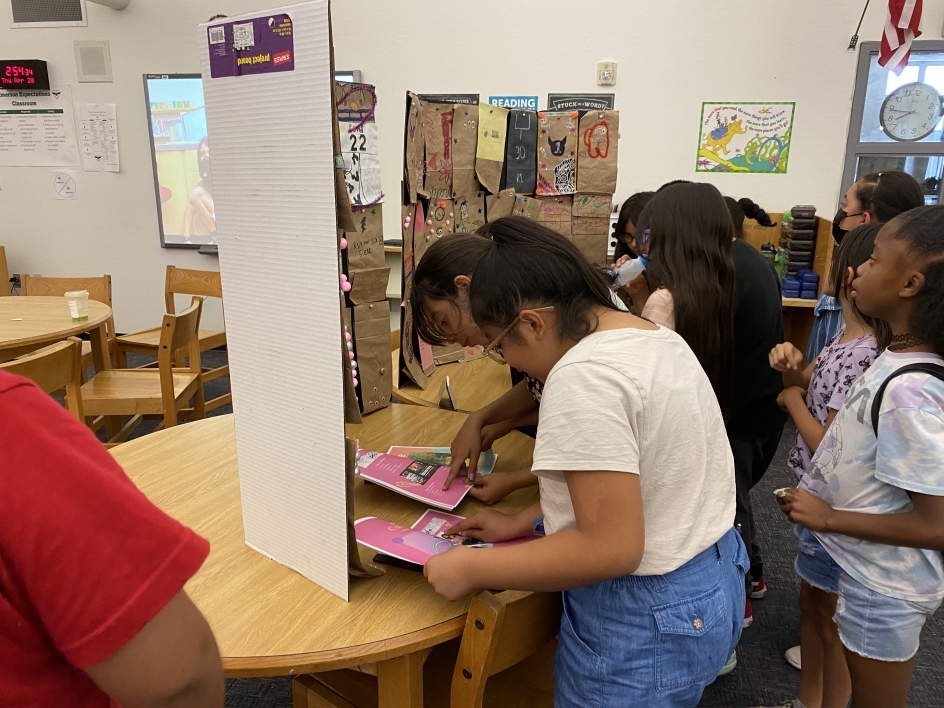 Emerson students browse magazines and displays made by other students. 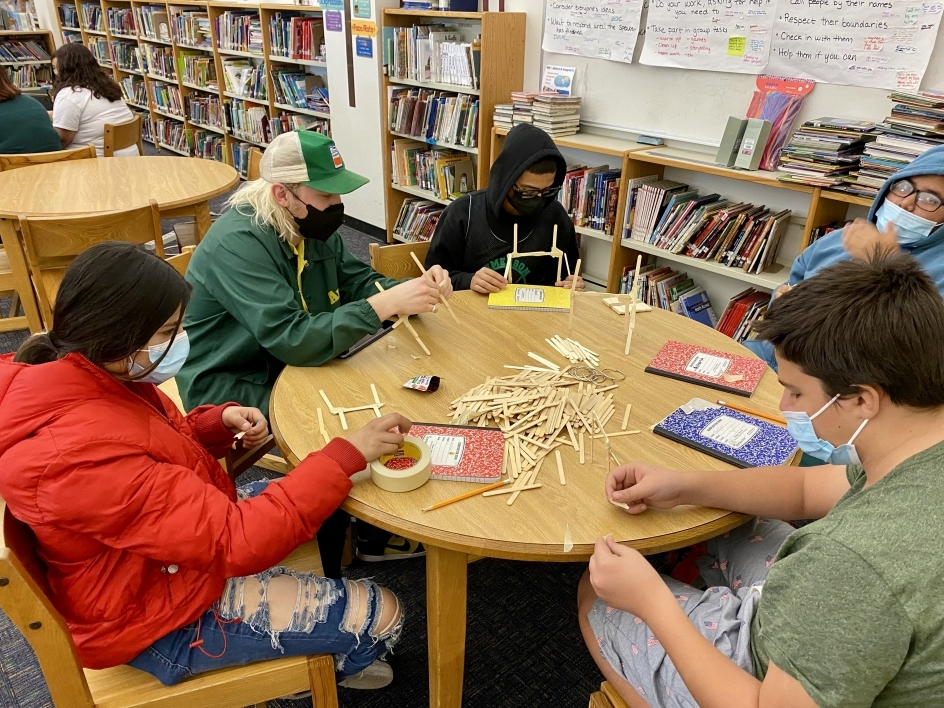 Emerson students work on building dioramas for the project. 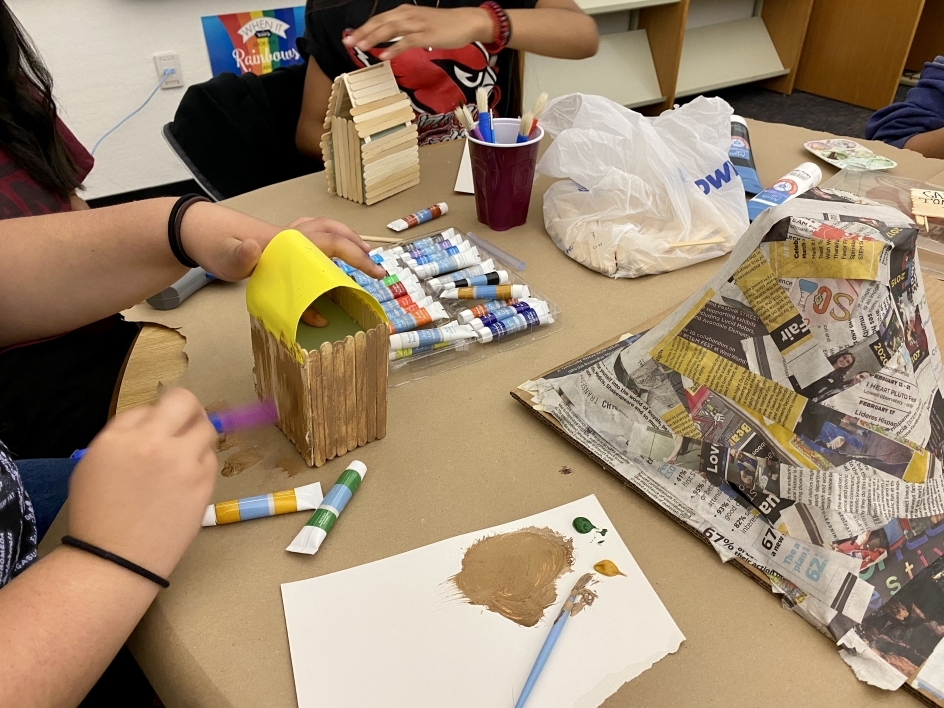 A student paints a diorama for the project.

Friedgen remembers one class struggling to work with each other near the beginning of the project, but ultimately coming together to write, design and star in their own movie called “Zombie Apocalypse at Emerson.” Other projects from other classes included a short story, a magazine, a year book and a comic book.

“I was so excited to see the ways in which the students co-designed and co-created their projects to celebrate the 100 year anniversary,” said Xanthia Walker, program coordinator for the Design and Arts Corps and Herberger Institute alumna. “Each group of seventh- and eighth-grade students worked with (Friedgen) and the team to design and build their projects, using the oral histories and their own lived experience of being a part of the school community as a guide.”

The oral histories that students did with parents, staff and Emerson alumni were recorded and edited into small audio files that were placed in relation to some of the sculptures or other art projects students made as part of the final display of the 100 year celebration.

“It is our hope that as we continue to grow this partnership, more students can become part of the collaboration from both Emerson and ASU, growing our capacity for intergenerational creative partnership,” Walker said.

While the attention of public health authorities has been rivetted on the current COVID-19 pandemic, caused by the novel coronavirus SARS-CoV-2, many other viruses have been stealthily circling the globe, causing serious disease and death in humans and other animals.One such pathogen is a virus responsible for African Swine Fever. The highly contagious, often lethal disease has devastated swine po...

While the attention of public health authorities has been rivetted on the current COVID-19 pandemic, caused by the novel coronavirus SARS-CoV-2, many other viruses have been stealthily circling the globe, causing serious disease and death in humans and other animals.

One such pathogen is a virus responsible for African Swine Fever. The highly contagious, often lethal disease has devastated swine populations around the world and is currently spreading rapidly across Africa, Europe, Asia and the Americas. 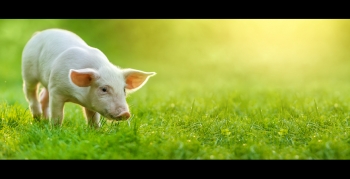 African Swine Fever is a lethal and highly contagious affliction affecting domestic and wild pigs. It has been spreading explosively across Africa, Europe, Asia and the Americas. The study describes the development of a rapid, inexpensive and highly accurate diagnostic that could be deployed in the field to help stem the tide of this illness. Download Full Image

No treatment or vaccine exists for African Swine Fever. Swine herds must be continuously monitored for any signs of the disease. If African Swine Fever is suspected, laboratory confirmation is carried out. This is often a costly and time-consuming undertaking, (typically a few days from sample collection to test result output), which makes containing outbreaks challenging. Positive test results are usually followed by the slaughtering of all animals affected or exposed.

In a new study, Arizona State University researcher Chao Wang and his colleagues advance an innovative method for rapidly diagnosing the disease, which could revolutionize the process and help safeguard millions of animals worldwide. Wang is a researcher with the Biodesign Center for Molecular Design and Biomimetics and the School of Electrical, Computer and Energy Engineering.

The project is a collaboration between ASU and Centro de Investigación en Sanidad Animal in Spain, which is also the European Union reference laboratory and the Food and Agriculture Organization reference center for African Swine Fever.

Wang and his colleagues have received about $750,000 in funding from the Agriculture and Food Research Initiative program of the National Institute of Food and Agriculture of U.S. Department of Agriculture to pursue their diagnostic test, dubbed NaSRED (for nanoparticle-supported rapid, electronic detection), a highly accurate means of detecting ASFV, the virus responsible for African Swine Fever. 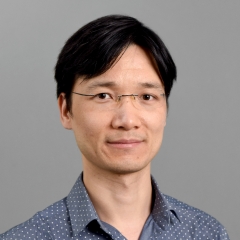 Chao Wang is a researcher with the Biodesign Center for Molecular Design and Biomimetics and the School of Electrical, Computer and Energy Engineering.

NaSRED offers several advantages over existing methods. The test can be performed at drastically reduced cost, yielding results in minutes rather than hours or days. It can easily be carried out in the field, without recourse to the sophisticated laboratory facilities required for processing similar diagnostic tests.

Remarkably, NaSRED’s diagnostic sensitivity is estimated to exceed that of enzyme-linked immunosorbent assays (ELISA), the current gold standard for such tests, by more than 10 times and surpass ELISA’s dynamic range by over 100 times. (The dynamic range is the range from the lowest to the highest quantities a diagnostic test can measure.)

The basic technique has already shown impressive results, where an earlier prototype was used to pinpoint the presence of two global human pathogens, SARS-CoV-2 and Ebola.

“I came across the (African Swine Fever) virus and was immediately amazed by its complexity,” Wang says. “The virus particle itself is protected with multiple layers and decorated with more than 50 structural proteins, in contrast to the SARS-CoV-2 virus particle, with only one single lipid bilayer and a few surface proteins.

"This makes it extremely difficult to understand how the virus works to cause the damage. This is also one big reason there is no effective vaccine available. Therefore, virus diagnostics for (African Swine Fever) are of paramount importance.”

African Swine Fever is an extremely contagious viral disease, often spreading like a wildfire throughout swine populations and inflicting mortality rates of 95–100%. The virus causes severe disease in both domestic and wild pigs.

The disease was first detected in East Africa in the early 1900s, later spreading to Europe in the late 1950s. More recently, it has carved a swath of destruction through many Asian countries. China has been especially hard hit, losing roughly 50% of its pigs to the disease since its first appearance there in 2018, causing direct economic losses of $141 billion in just one year.

The disease is causing considerable socioeconomic hardship in countries that export live pigs and pork products, as well as in countries where pigs are important food sources in the diet.

While the U.S., including Puerto Rico and the U.S. Virgin Islands, is currently African Swine Fever-free, it is believed to be at increased risk of importing the disease through other countries in the Americas where the disease is already present, including in the Dominican Republic and Haiti.

The effect of African Swine Fever reaching the states could be devastating as the U.S. is the world’s third largest pig producer, with more than 11.5 million tons of pork produced each year, and it’s also the world’s second largest pork exporter. The U.S. may face far-reaching economic consequences if the disease is introduced.

Ideally, swine populations should be under continual surveillance by means of a portable diagnostic, stockpiled near animal pens, enabling earlier and faster disease detection at reduced cost. Such a method would also permit widespread, high-frequency testing, a crucial factor in disrupting the transmission chain of the virus and containing an outbreak.

The project involves the design and validation of NaSRED, a portable diagnostic sensing device, using metal nanoparticles. The NaSRED test uses collections of metal nanoparticles with different optical characteristics to ferret out ASF biomarkers — telltale signals of the presence of the virus.

The project proposal describes detection of a specific African Swine Fever protein known as p72 and two ASF antibodies, anti-p54, anti-p30, making for a much more accurate and sensitive test, compared with diagnostics that only test for one of these disease signatures.

As the African Swine Fever proteins and antibodies adhere to the nanoparticles, they aggregate to form clusters. The increased weight of these clusters causes them to sink to the bottom of the test tube, causing a detectable color change in the solution. The unique optical properties of these clusters, which signal positive identification of the virus, are observed when light is passed through the solution.

Using simple and inexpensive electronic circuits, the system can easily convert the optical signals produced by the metal nanoparticles into a quantitative electronic readout of test results. The collected signals will be automatically recorded by circuitry and transmitted to computers or phone, where negative or positive results will be displayed, making the testing an even easier task that could eventually be performed by farmers.

The final sensing system, ideal for pen-side testing, will be hand-held, and the cost of materials is expected to be around $20, while individual tests can be performed for under $1. Rapid testing, requiring less than a microliter of blood, will deliver results within minutes.

The technology is a particularly attractive option for testing swine in resource-limited settings and promises to dramatically enhance efforts to combat this global scourge.