Brent Nannenga, an associate professor of chemical engineering in the Ira A. Fulton Schools of Engineering at Arizona State University, is being recognized with an Early Career Impact Award from his alma mater, the University of Washington. The award recognizes a graduate who has made significant contributions to engineering in industry, academia, government or public or volunteer service within 15 years of receiving their degree.

“Brent was selected for this departmental award on the basis of his stellar achievements in research and teaching,” says Jim Pfaendtner, chemical engineering department chair and professor of chemistry at the University of Washington. “The drive and creativity he displayed as a graduate student in our department have been on full display during the first phase of his independent faculty career. We are so proud of his excellent work.” 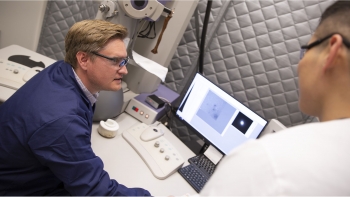 Brent Nannenga conducts research in his Arizona State University lab, where he helped develop the innovative technique called microcrystal electron diffraction, or MicroED. The associate professor of chemical engineering in the Ira A. Fulton Schools of Engineering recently earned recognition for his work with an Early Career Impact Award from the University of Washington, where he earned his doctoral degree. Photo by Erika Gronek/ASU Download Full Image

Nannenga earned both his bachelor’s and master’s degrees in chemical engineering from ASU before pursuing his doctoral degree from the University of Washington. He credits the program for preparing him for success as a researcher and instructor at ASU.

“It was a really supportive environment. It was what I needed at that time in my life to really grow: awesome mentorship and top quality research,” he says. “I definitely don’t think I’d be here without the experiences I had at the University of Washington.”

“He was an outstanding adviser, and I owe a ton to his mentorship,” Nannenga says. “The way I run my lab and the way I mentor students, I learned from him, which is why this award back in my home department at the University of Washington is so exciting. It recognizes how much the programs really offered me.”

Baneyx says, “Brent has the unique blend of creativity, intellect and grit that characterizes the best researchers, and the deep-seated desire to mentor, teach and elevate others that defines the best teachers. I couldn’t be prouder of his accomplishments.”

At this point in his career, Nannenga’s most impactful innovation is in the field of cryo-electron microscopy. He helped develop a technique called microcrystal electron diffraction, or MicroED. The technique helps better understand the internal structure of a variety of materials on a near-atomic level by freezing a sample and analyzing it with an electron microscope. MicroED allows researchers to examine structures millions of times smaller than the traditional X-ray method.

Knowing the arrangement of atoms and molecules in a substance is invaluable to research in a wide variety of disciplines. The technique is so popular that Nannenga is processing samples from countries around the world. His contributions in crystallographic research earned him the 2022 Margaret C. Etter Early Career Award from the American Crystallographic Association.

Innovative work of this kind requires highly specialized instruments like electron microscopes. Access to this equipment is in part what brought Nannenga back to ASU after completing his postdoctoral work in structural biology at the Janelia Research Campus of the Howard Hughes Medical Institute.

In 2020, Nannenga was recognized by the National Science Foundation with the Faculty Early Career Development Program Award for his work in MicroED and his use of the technique to investigate biological methods to develop nanotechnology. The award is intended to honor faculty with potential to become role models in their field, and provides about half a million dollars to each recipient to support their research.

Though his research is important to him, Nannenga also sought a position at ASU for the opportunity to mentor students. He considers it an honor to work with students as part of his lab group at the School for Engineering of Matter, Transport and Energy, one of the seven Fulton Schools at ASU.

“It’s helpful to work on a project together with students who have different perspectives, and it’s fulfilling to see how students grow. When they first join a lab, I’m telling them how to do everything step by step. Then I watch them slowly grow until, at the end, when they graduate, they’re telling me what they’re doing as opposed to me teaching them. That’s the part I like,” Nannenga says.

There is much on the horizon for Nannenga. He aspires to continue honing the MicroED technique, building relationships with students and forging new paths in chemical engineering. His most recent research focuses on protein engineering and studying the structure-function relationships of these designed proteins.

Nannenga will be presented with the University of Washington Chemical Engineering Early Career Impact Award in fall 2022.

A three-bedroom house with a dock is for sale in coastal Lafitte, Louisiana, near a marina and a seafood restaurant, for $160,000, according to a popular real estate app.What the app doesn’t tell you is that the person who buys that house is likely to face costs of about $6,232 a year due to environmental hazards like wind and rain. And financial assistance from the government after the storm is... 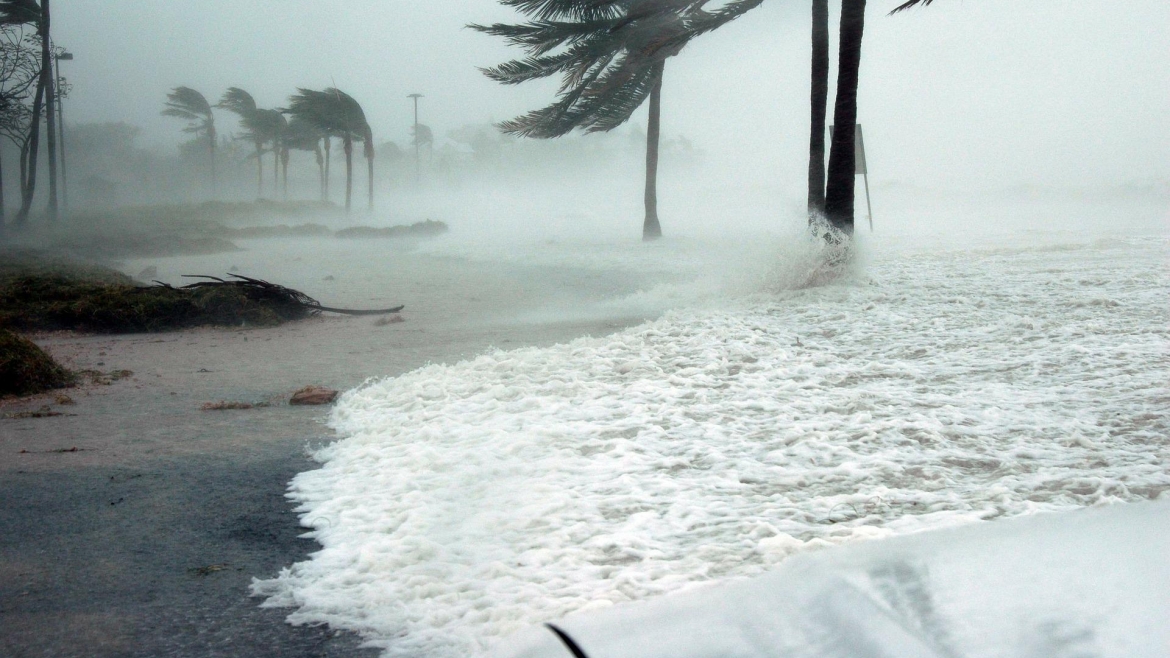 Downtown Phoenix campus
ASU contributes to database of properties at risk of wind, flooding damage.
May 20, 2022

A three-bedroom house with a dock is for sale in coastal Lafitte, Louisiana, near a marina and a seafood restaurant, for $160,000, according to a popular real estate app.

What the app doesn’t tell you is that the person who buys that house is likely to face costs of about $6,232 a year due to environmental hazards like wind and rain. And financial assistance from the government after the storm is iffy.

That valuable information can be found on a new website called HazardAware, based on research from several institutions, including Arizona State University.

Melanie Gall, clinical professor and co-director of the Center for Emergency Management and Homeland Security at ASU, and Natasha Mendoza, an associate professor in the School of Social Work, are part of a team that developed HazardAware, a new tool to help Gulf states homeowners, as well as renters and buyers, assess a property’s risk and make informed decisions.

HazardAware can provide disaster risk reports for 13.3 million addresses in nearly 200 counties along the Gulf of Mexico — including all of Florida, and parts of Mississippi, Alabama, Louisiana and Texas.

HazardAware, which took three years to create, was made possible by a $3.4 million grant from the Gulf Research Program, which is funded by settlements from the Deepwater Horizon offshore oil spill in 2010.

“Zillow gives you information on how much a house costs and an estimate for homeowner’s insurance and maybe monthly mortgage payments, and you get a sense of the financial burden if you buy that house,” said Gall, who also is an affiliate faculty member in the of School of Geographical Sciences and Urban Planning at ASU.

“But you have no idea the context you’re putting yourself into or the risk you’re taking on. What that amount doesn’t factor in is how much it costs to recover when impacted by a disaster.

People can type in an address and HazardAware provides a huge amount of information:

All of that data is compiled into a resilience score for the property, from 1, the lowest level of resilience, to 100.

Many factors go into the resilience score, and the results aren’t always expected. A $2 million house for sale right on the beach in Galveston, Texas, has a score of 71 — pretty resilient — because of high community resilience and because it was built in 2017 with a newer building code.

The Lafitte house had a resilience score of 32. One reason is that it was built in 2000, before building codes were upgraded to improve resistance to wind and flood damage.

Gall said the team is still working on the site.

“Right now, it’s a site for the general public thinking about residential use, but we are also working on building out a portion that focuses more on stakeholders like planners or emergency managers who don’t want information on one building, but are interested in a regional interpretation,” she said.

“They might look at what area of their city has houses with the lowest score or where there’s a combination of low scores and demographic information.”

Other upgrades may include a way for homeowners to indicate that they’ve made mitigation changes to their properties.

“For example, if a house had a massive renovation project and was elevated, we would not know about that from the basic information we have,” she said.

Gall said that the project was like a potluck.

“Everyone brought their expertise and their data, and the challenge for us was thinking about how to combine it and how to communicate it,” she said.

Gall contributed data on disaster loss. She has worked on SHELDUS, or Spatial Hazard Events and Losses Database for the United States, ever since she was a PhD student at the University of South Carolina. She brought SHELDUS, which tracks events such as thunderstorms, flash floods, weather fatalities and property losses at the county level, with her when she came to ASU in 2017. FEMA and the Environmental Protection Agency are among the subscribers of SHELDUS, which was recently updated and is financially self-sustaining.

Mendoza was part of a team that administered an online survey to residents of the Gulf states that determined the best way to present the information so that people would use it. That’s how they decided on a resiliency score.

Last week, a house on the shore in North Carolina collapsed onto the sand after being pummeled by a storm for several days. The homeowner, who bought the house nine months ago, told the Washington Post: “I didn’t realize how vulnerable it was.” That was despite dire warnings from many federal agencies about rising sea levels.

That’s the attitude that HazardWare is confronting, Gall said.

“You see it all the time – people moving to Flagstaff who have never heard of wildfires,” she said.

“We want to shorten the time of increasing awareness of where you’re living and the hazards you’re facing and what to do about it.”

Gall said she hopes the platform can be expanded to include other areas of the country.

“The approach makes it not difficult to add other hazards like wildfire and heat,” she said.

“Hopefully we will find a mechanism to do that, and we’d like to explore partnering with companies like Zillow or Redfin to be integrated into their apps.”