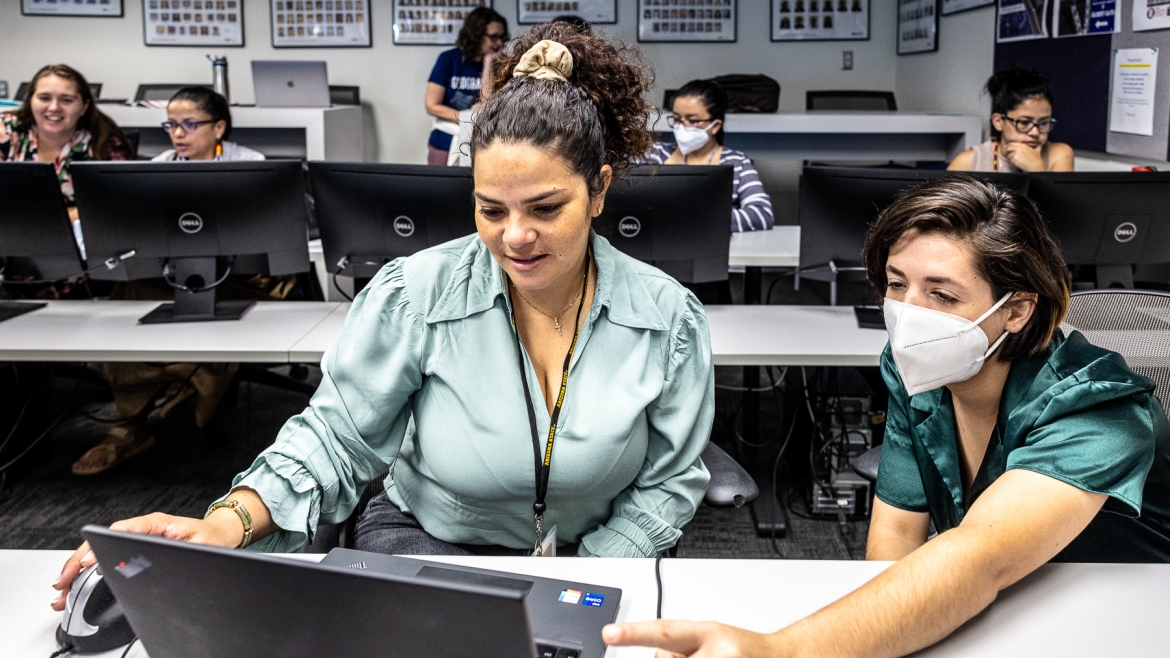 Tempe campus
Female scientists get career boost at ASU for their work in the Amazon region.
May 19, 2022

Nearly two dozen women from South America spent this past week at Arizona State University to become more empowered to fight climate change in their communities.

The 23 women, from Brazil, Colombia, Ecuador, Guyana and Peru, attended a conference titled, “Advancing Women’s Prosperity in the Workplace.”

The conference was sponsored by SERVIR, a joint initiative of NASA and the U.S. Agency for International Development to use geospatial technology to address environmental issues, and ASU’s Knowledge Exchange for Resilience, which harnesses research to help communities in Maricopa County.

The women work in organizations and government agencies utilizing geographic information systems, remote sensing and global navigation satellite systems in the Amazon region. But with few women in their fields, they face challenges. SERVIR has committed to engaging early-career women around the world to improve access and help them pursue pathways in the field.

Patricia Solis, executive director of the Knowledge Exchange for Resilience, told the women they were at the conference because of the seriousness of climate change.

“There’s crisis all over the world. Half of the world’s population struggles and has many barriers to contribute to solving this – women,” said Solis, an associate research professor in the School of Geographical Sciences and Urban Planning at ASU and an organizer of the conference.

“There’s a gap in women’s engagement and participation in some of the most powerful technologies and tools and ideas to address important ideas like climate change and deforestation, water, drought resilience.”

During a week of lectures and labs, the women learned about data sets they could access, tools they could use and how to network and grow their careers. Here’s some of what they covered:

Emily Adams, a research scientist with the University of Alabama in Huntsville who works with SERVIR programs in Africa, said that SERVIR emerged from a place of need because climate change is a reality.

“We know that disadvantaged and marginalized communities are most affected, and that satellite data and observations have the power to help us understand the impacts to our communities,” she said.

But data is lacking from remote regions, and “we can leverage satellite data to help us fill in the gaps.”

Adams said that SERVIR works to ensure that the perspectives of women and other marginalized groups are included in the communication of the environmental-tracking services it provides. Those services include things like flood warnings and crop mapping. 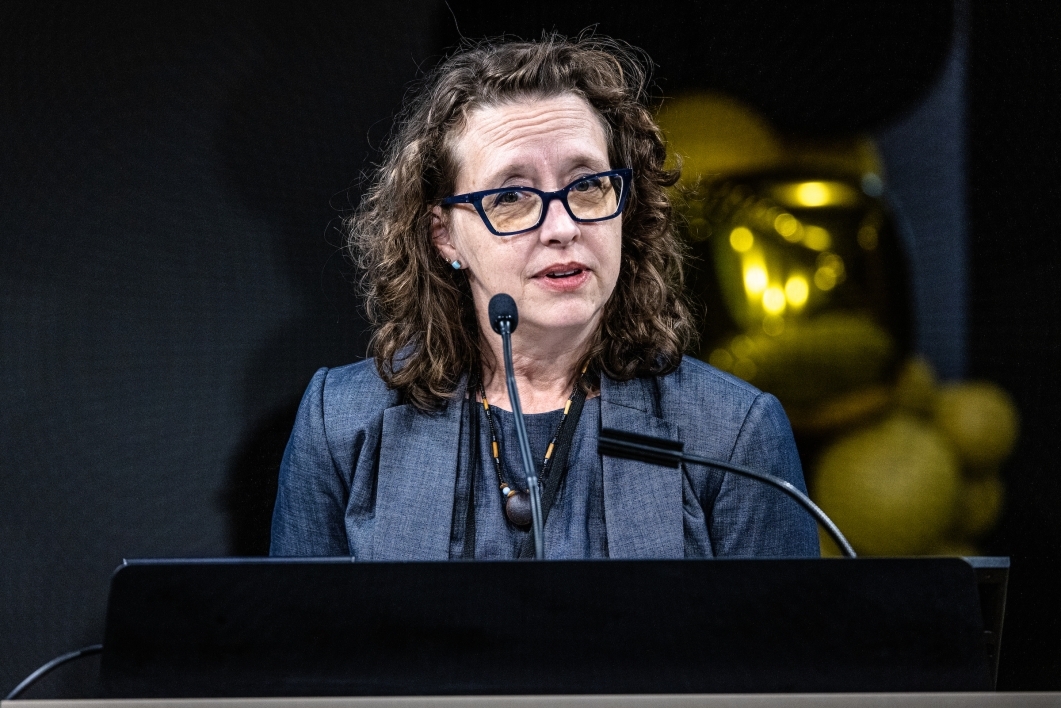 Patricia Solis, executive director of the Knowledge Exchange for Resilience at ASU, was one of the organizers of the “Advancing Women’s Prosperity in the Workplace" conference. 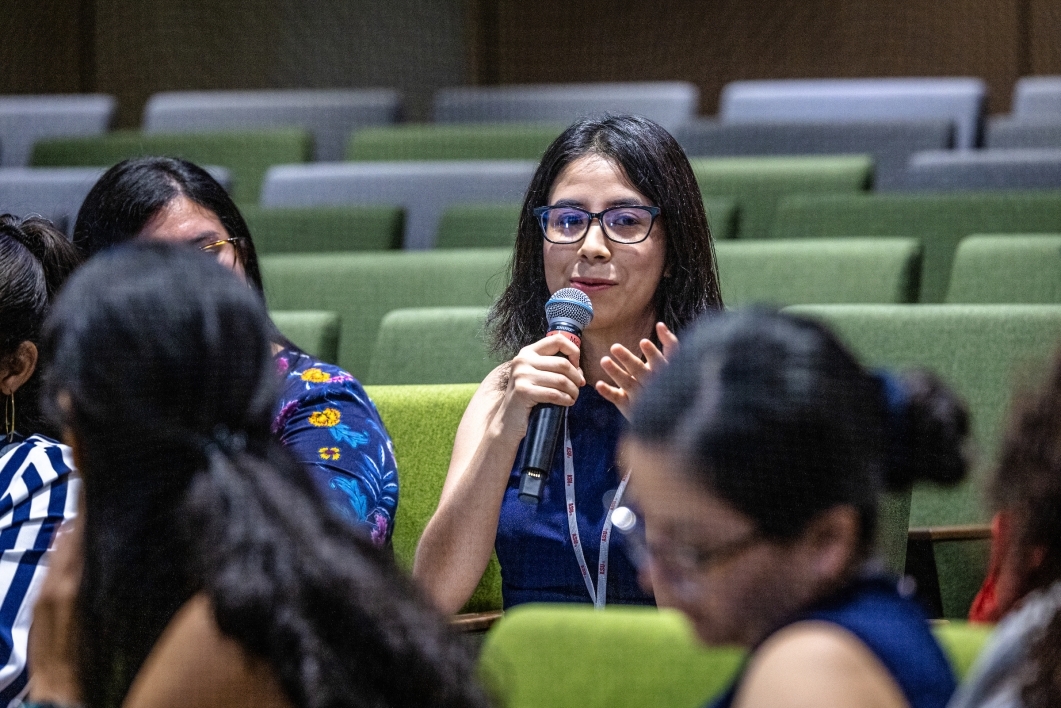 Milagros Becerra Zambrano of Peru, one of the 23 attending scientists, introduces herself during the welcoming session of the “Advancing Women’s Prosperity in the Workplace" conference at the Walton Center for Planetary Health on May 16. 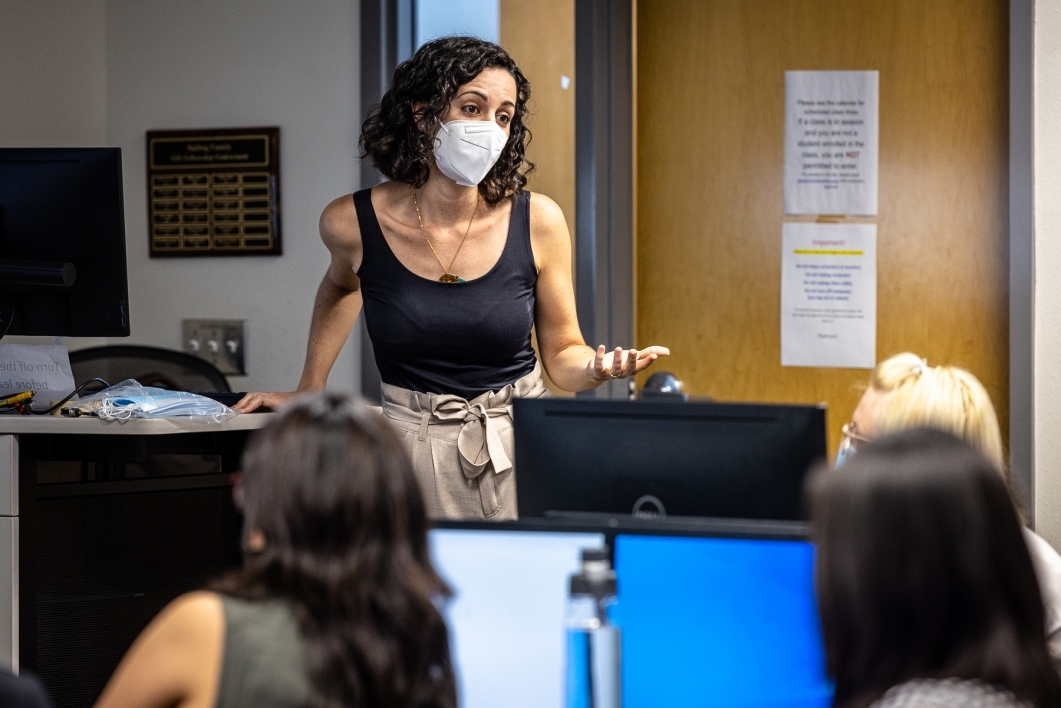 ASU doctoral student Natalia de Silveira Arruda, who is from Brazil, talks about using volunteer and crowdsourced data for obtaining land-cover information during one of the sessions of the weeklong “Advancing Women’s Prosperity in the Workplace" conference on May 19 in Coor Hall. 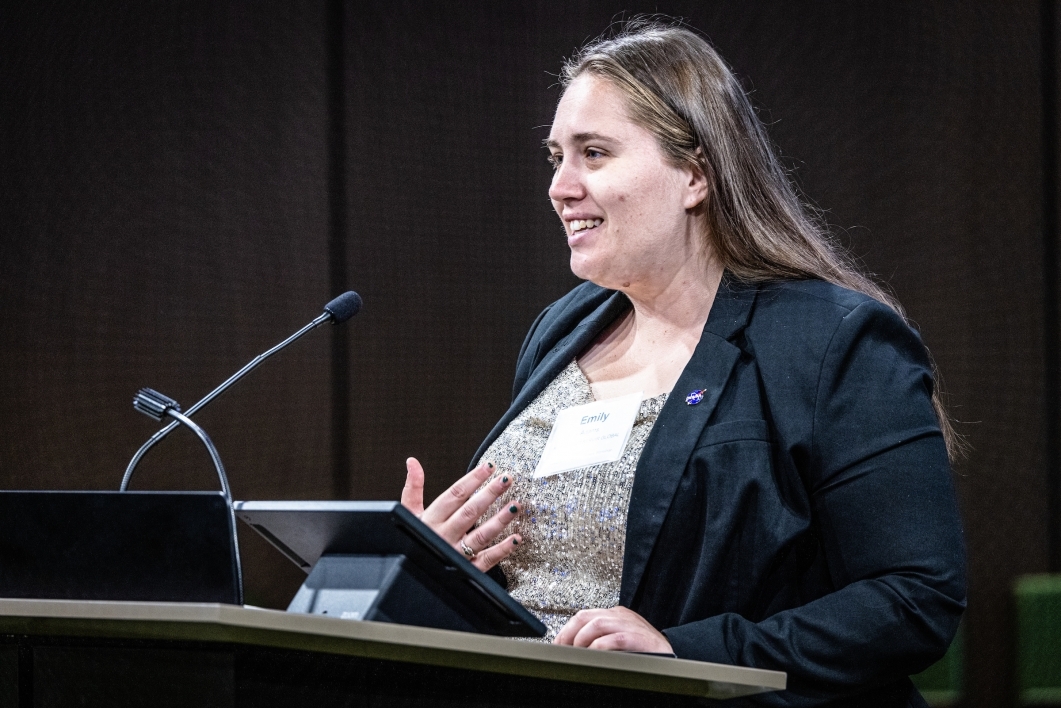 Emily Adams, a research scientist for SERVIR, based at the University of Alabama at Huntsville, addressed the women during the opening session. She told them she wore a sequin-covered dress because once, a young girl told a scientist colleague that scientists don't wear "sparkly things." "I really love sparkly things, and I’m a scientist,” Adams said.

“We have built a team to think about a more transdisciplinary approach to make sure the science we do that is more inclusive.”

Laura Dunansen, an assistant professor in the Department of Geographical Sciences at the University of Maryland, spoke to the women virtually about the GEDI program, for Global Ecosystem Dynamics Investigation, which uses lidarlight detection and ranging from space to map forests on Earth.

A refrigerator-size box is plugged into the side of the International Space Station and uses three lasers pointed at the Earth’s surface. Launched in 2018, GEDI has collected more than 16 billion data points since 2019, she said.

Duncansen translates those data points into estimates of forest coverage. All of the data is free and downloadable.

“The Brazilian Amazon is crucial. You’re losing so much protected forest,” she told them. “These are the most important places to maintain protections and then expand it.

“And we can rely only on satellite mapping. We always need field data.”

Elizabeth Wentz, dean of the Graduate College at ASU and director of the Knowledge Exchange for Resilience, had the women write down 20 accomplishments that made them proud.

Wentz, a professor at the School of Geographical Sciences and Urban Planning at ASU, said that women are 33% less likely than men to engage in self-promotion.

“To say, ‘I accomplished this.’ Part of the reason why is that women are punished for self-promotion. There’s a negative consequence,” she said.

“We’re always facing these tensions and, in many respects, held to a higher standard.”

She told the women that it’s important to seek out external validation for themselves and each other.

“If the award doesn’t exist, create it,” she said.

The women heard from Christina You-sun Park, assistant director of the Studio for Creativity, Place and Equitable Communities in the Herberger Institute for Design and the Arts. She described how the studio works with communities to define what the residents want and empower them to achieve it.

“Sometimes there’s a disconnect between us as humans and the systems we’re living in. How do we make that connection closer?” Park said.

“It’s a great portal to make people feel like they have ownership of things, that they have a connection and the ability to make change in the community.”

Park said that working with artists or food culture are good ways to get a foothold into a community and begin the process. The women divided into groups to discuss how they might use creative-placemaking principles in their communities.

Bianca Chaves Marcuartú said that there is a collective of women who produce jam in her Brazilian state of Para, and her group proposed tying their value to the health of the forest.

“We thought that we can make people understand the meaning and importance of keeping the forest protected and preserved for food so you can have those things you cherish,” she said.

One of the participants, Natalia Uribe Rivera, who works for SERVIR Amazonia in Colombia, said she and her peers found the conference sessions to be informative and, sometimes, emotional.

“It’s triggering memories of how hard it was for me to achieve the point I am now in a professional way,” said Uribe, who did her PhD in the Netherlands and created an app that uses geospatial technology to help farmers improve crop production.

“Now I’m more confident about my skills, but I see my colleagues are not that way.

“It’s touched me to see that there are many things to improve in our culture, and how important women are to making change,” she said. “But I’m so motivated because I know we’ll have a nice group to be empowered and work together for the community.”

Top photo: Natalia Uribe Rivera (left), of Colombia, and Vanesa Martín, with SERVIR Amazonia in Huntsville, Alabama, work together on an example of using volunteer and crowdsourced data for obtaining land-cover information during one of the sessions of the weeklong “Advancing Women’s Prosperity in the Workplace" conference. Photo by Charlie Leight/ASU News

Students at Pasadena City College (PCC) in California will have a streamlined path to a four-year degree at one of the Southwest’s most prestigious universities, thanks to a partnership unveiled this week.The MyPath2ASU partnership links PCC with Arizona State University, allowing students in the San Gabriel Valley the opportunity to pursue advanced study at any of ASU’s multiple campuses in ...

Students at Pasadena City College (PCC) in California will have a streamlined path to a four-year degree at one of the Southwest’s most prestigious universities, thanks to a partnership unveiled this week.

The MyPath2ASU partnership links PCC with Arizona State University, allowing students in the San Gabriel Valley the opportunity to pursue advanced study at any of ASU’s multiple campuses in Arizona or at ASU Local — the university's hybrid undergraduate program — at the ASU California Center in downtown Los Angeles. 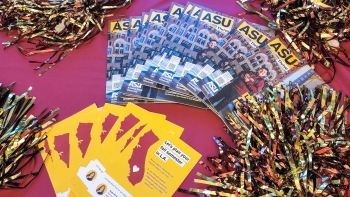 PCC is already recognized as a transfer leader and ranking first in California with transfers to the University of California and California State University systems for the past three years, and its agreement with ASU adds additional choices to an already healthy menu of options. Working with their transfer adviser, PCC students will be able to structure their community college studies to simplify and streamline their entry to ASU’s 350 bachelor’s degree programs across 17 schools.

“We know how important the benefits of a bachelor’s degree are to our students,” said PCC Superintendent/President Erika Endrijonas. “It’s more than just an increase in pay and an expansion of career opportunities. The intellectual and social development that comes with a college education only get broader and deeper the more time you spend pursuing your degree.

“We are thrilled to be able to offer these benefits to our students at a renowned institution such as Arizona State.” ASU California Center programs in downtown Los Angeles encourage its community of students, faculty and staff to come together for connection and support while having access to the extended Los Angeles community. The space is intended for small group interactions and study sessions with plenty of room for solo study sessions or one-on-one conversations between students.

ASU Local is ASU’s hybrid undergraduate program that empowers students to thrive in college and in life while staying rooted in their communities. ASU Local students have access to 130-plus online bachelor’s degrees while they receive in-person support at the ASU California Center to foster an individualized college experience and career plan designed to harness the essence of the local community in Los Angeles.

“The best thing about being part of ASU Local is the way they support my academic, professional and personal goals. They see me as a whole person and provide me with a platform to show up authentically while giving me the space to be seen,” said Gigi Colcol, a transfer student at ASU Local in Los Angeles.

Students can transfer to ASU Local easily with the help of MyPath2ASU. Students can build a path to a major of their choice, minimizing loss of credits and saving precious time and resources.

The Sidney Poitier New American Film School, part of ASU’s Herberger Institute for Design and the Arts, is one of the largest, most inclusive film schools in the country and operates across three cities. Pasadena City College transfer students studying in downtown Los Angeles will:

PCC students are already completing the associate degree for transfer in increasing numbers each year. In addition, PCC has partnered with the Group Effort initiative, co-founded by Blake Lively and Ryan Reynolds, to help BIPOCAcronym for Black, Indigenous and people of color. and other students find careers in Hollywood.

ASU offers transfer pathways built from PCC to the university with MyPath2ASU for on-campus, ASU Local and ASU Online programs. Students can use MyPath2ASU to map their bachelor’s degree pathway to one of ASU’s offerings. Together, the institutions will work collaboratively to promote educational degree pathways. These pathways will ensure their courses are applicable toward their degree in their chosen major and minimize credit loss.