Imagine flying a small plane over one of the United States’ busiest airports with large commercial aircraft filling the sky around you and a sprawling city below, testing your skill as a pilot.

Grant Penderghast does not have to imagine this scenario because he has lived it. 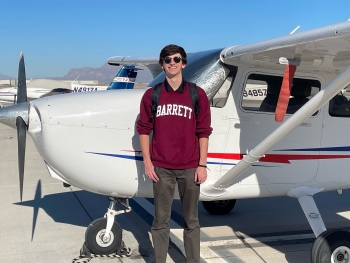 Grant Penderghast, a professional flight student at the Arizona State University Polytechnic campus, plans to be a commercial airline pilot. He said his favorite place to be is in the sky. Download Full Image

Penderghast is an Arizona State University student pursuing a Bachelor of Science in aeronautical management technology (professional flight) with a minor in trombone music performance.

He is in Barrett, The Honors College at ASU and a member of the ASU Jazz Repertory Band. He also is a member of the Barrett Poly Colloquium, where he assists first-year honors students with writing for the college's The Human Event course.

In July 2020, Penderghast, who is from Mission Viejo, California, flew over Los Angeles International Airport in a Cessna 172 single engine propeller plane as part of the process to obtain his private pilot license.

“All around were these enormous planes from major airlines. It was the coolest experience to be flying in such a tight area, surrounded by huge planes everywhere, but feeling I belong here and I’m capable of what’s required of me,” said Penderghast, who obtained his private aircraft pilot license that year.

You could say that flying is in Penderghast’s blood.

His mother is a 36-year flight attendant for American Airlines and his aunt is a United Airlines captain.

“I’m very used to the industry. I’ve been around it all my life,” Penderghast said.

His mom and aunt helped peak his interest in flying and pursuing pilot licensures and an aviation-related university degree.

He said his areas of study are a “really good mix of what I enjoy the most, music and flying.”

But that mix of major and minor, along with putting in hours in the sky, takes a lot of preparation, time and flexibility.

“I have to really manage my class schedule to have aviation on some days at Poly and classes at Tempe on other days. It’s hard and a lot of work, but it’s worth it and I’m really enjoying it,” he said.

“I haven’t gotten into coffee, yet,” he joked about how he handles his jam-packed schedule.

In addition to his studies, Penderghast is currently working on his commercial pilot rating, which requires completing a minimum of 200 hours of flight time and flight maneuvers such as stalls and specific types of landings with small margins of error. He also must learn Federal Aviation Administration regulations and rules.

For his private pilot license, he was required to complete a minimum of 40 flight hours, including day and night flights, 10 hours of solo flight, and flights consisting of at least 150 nautical miles.

For his instrument rating, which he obtained in February 2022, he was required to complete 90 hours of flight in instrument meteorological conditions, such as in the clouds, on flights ranging from 150 to 250 nautical miles and including specific flight procedures.

Penderghast said his ultimate goal is to be a commercial airline pilot and fly internationally.

“I love to travel and to do that as a job would be incredible,” he said.

And, there could be a chance to work with his mother.

“My mom and I laugh because how funny would it be for her to be a flight attendant on a flight with me as first officer?” he said.

Whatever his future in flight may bring, Penderghast said he is happiest in the sky.

“I’m a big view person," he said. "I love to be able to look around and get an extensive view of everything around me. To be 10,000 to 20,000 feet above the ground and see everything and to feel how you are just a small part of the landscape and to get to see things that you wouldn’t get to see otherwise is the most cool thing ever.”

What advice does he have for students who may want to pursue a professional flight major?