Heidi Toth, an ASU Online undergraduate student studying religious studies and a full-time employee at Northern Arizona University, recently took a class project out of the classroom and into a conference room full of historians. She presented at the 2022 New Mexico-Arizona History Convention in Las Cruces, New Mexico earlier this month with research she began collecting last semester in a history of genocide course.

The course examines the individuals and institutions responsible for the most infamous episodes of state-sanctioned violence in the 20th century. It covers many genocides, and for the final project, students were asked to compare two different genocides. 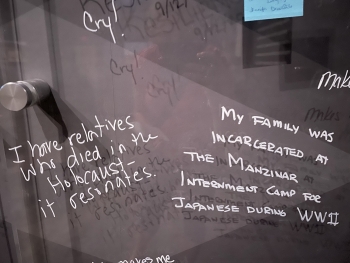 A photo from an exhibit at the convention. People answered a question about how their family history influenced them attending. Download Full Image

“It’s important to not create an Olympics of suffering or consider which horrible tragedy is ‘worst,’ but comparing genocide is necessary to find similarities, especially in the lead-in,” Toth said. “For instance, we know that dehumanization of a group precedes many genocidal events.”

One article she read in the class mentioned an internment camp named Bosque Redondo for Native Americans in Fort Sumner, New Mexico, and a march akin to the Trail of Tears, known as the Navajo Long Walk. As someone who grew up in New Mexico, Toth had never heard of this camp or walk and immediately went down a rabbit hole to find out more.

The Navajo (Diné) people faced horrific conditions while at the camp, which led to deprivation, starvation, disease and death. According to an article by the Native Knowledge 360° Education Initiative at the Smithsonian’s National Museum of the American Indian, over 2,000 people were interned at the camp where as many as one out of four died and were buried in unmarked graves. After years of negotiations, the Navajo Nation and the U.S. agreed on a treaty in 1868 that allowed the prisoners to return to their homelands.

For her final paper, Toth decided to compare the genocide of Native Americans as perpetrated by the U.S., using Bosque Redondo and the Long Walk as a specific example, and the Holocaust.

Since Toth has two previous degrees in journalism and business, she wanted to do her research through interviews and personal observations of Bosque Redondo. She traveled to the site and interviewed the site manager.

“I didn’t realize this at the time, but the New Mexico Department of Cultural Affairs had just opened a new exhibit a few months before,” Toth said. “The exhibit is incredible. It is so moving and descriptive and unapologetic. I was crying at the first thing I saw: a letter left at the site in 1990, written by 20 Navajo teenagers, castigating the state for having an exhibit that was supposedly about the Navajos but was mostly about Billy the Kid. He was killed in Fort Sumner a few years after the camp closed.”

Toth couldn’t fit all of the research she had done and all that she had learned in the final paper for the class, and she wanted to do something more with it.

“Shortly after the term ended, I got a SHPRSSchool of Historical, Philosophical and Religious Studies email that included a call for entries for the 2022 New Mexico-Arizona History Convention,” Toth said. “I talked through some ideas with Professor Jason Bruner, who was one of the professors in my history of genocide class, and he offered good feedback on how to focus a presentation pitch and writing the proposal.”

“She was interested in developing the project further, and a regional conference presentation is a great way to do that, since it helps you clarify what you want to say and could put you in touch with other local scholars who are working on similar subjects and could give you helpful feedback,” Bruner said. “That her project was accepted, and that she wanted to present it in the first place, is testament to the high caliber of work our students are doing.”

The thesis of her research for the conference was about the new exhibit at Bosque Redondo and the process by which it was created. What made her research unique is that it didn’t focus on the history of the exhibit, but the exhibit itself.

“This exhibit was groundbreaking,” Toth said. “It took about five years from start to finish, and so much of that time was building trust with the Navajo and Mescalero Apache tribes and figuring out how to present not only the history in a culturally appropriate way but also who the tribes are today. The tribes hadn’t been well-represented in the creation of these exhibits up to this point, so those conversations were necessary.” Heidi Toth presents her paper at the conference.

She focused her proposal on what she thought was most important, the storytelling. Her hope was to tell the tale of these events in a way that would evoke emotions from those listening.

This approach is different from traditional conference presentations. As most historians focus on how to examine the past from different viewpoints, Toth wanted people to imagine the past in a vivid way.

Her personal investment in the research is what makes her analysis “original, lucid and insightful,” Bruner said.

When she finally got to the conference, after rewrites and practice presentations in front of her family and friends, Toth got on the stage to present.

“I was definitely nervous, and it took a couple of minutes to feel my nerves settle,” Toth said. “After watching other presentations all day, mine was so different. So I was extra nervous knowing I was doing something different, and that I was sharing my own emotions and experiences. This was deeply personal for me. I’m from New Mexico. I should have known about this horrific piece of history, and I didn’t.”

It didn’t matter that her presentation was different from others. She was proud of her work.

“I was telling a story, and it was well received,” Toth said. “This was a room full of historians of the Southwest, so most of them knew the history, but a couple people told me I invited them to see it in a different way and consider other perspectives. So I was happy with how it turned out.”

Toth said she would encourage other students to try and take their work out of the classroom and to present at a conference.

“It was a really good experience,” she said. “It helped that my topic meant so much to me, and it helped that this was a smaller, more focused conference. I think I would have been more intimidated by a larger conference. But this one felt supportive, and people were excited and passionate about the topics.”

NCAA Round Two Update: Men's Golf Getting It Done in Stockton

With one round to play on Wednesday, the Sun Devil men's golf team leads 14-team field at the NCAA Stockton Regional, and it got its top player entering the season back in the lineup. ...

NCAA Round Two Update: Men's Golf Getting It Done in Stockton With one round to play on Wednesday, the Sun Devil men's golf team leads 14-team field at the NCAA Stockton Regional, and it got its top player entering the season back in the lineup.