A passion for less commonly taught languages is at the "heart" of doctoral student Gina Scarpete Walters’ dissertation research. In fact, her work examines how that word appears across different languages and cultures. 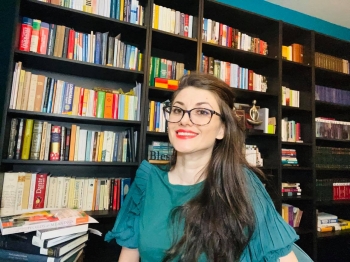 Doctoral student Gina Scarpete Walters was recently awarded a grant that will help fund research and data collection for her dissertation and related projects. Her work looks at metaphorical conceptualizations of the word "heart" across five different languages. Download Full Image

She recently was awarded a NFMLTA-NCOLCTL (National Federation of Modern Language Teachers Associations and National Council of Less Commonly Taught Languages) Graduate Research Support Grant, which will help fund textual research and the planning and execution of the first phase of data collection for her project.

Scarpete Walters’ research will bring together five languages: Romanian, Modern Greek and Albanian (which are part of the Balkan Sprachbund, a linguistic area consisting of languages that belong to various branches of Indo-European), and Piipaash and O’odham (which represent two large families of North American languages, Yuman and Uto-Aztecan).

Her dissertation will discuss the findings from the three Balkan languages, and a separate study will be devoted to the two Indigenous languages, both of which are spoken in Arizona.

As neighboring languages, the first three share linguistic traits, such as similar case systems. The latter two are also genetically unrelated, Scarpete Walters said, but akin to the Balkan Sprachbund, they “share the same space.” This means that they might have influenced each other through the phenomenon known as language contact.

Scarpete Walters’ dissertation has several objectives. She said she will attempt to identify “universal human concepts in culture-specific configurations of 'heart'” across the various cultures and languages that are part of her inquiry.

She will also explore “pedagogical implications for the learning and teaching of metaphors and idioms in a foreign/second language.” This draws on research showing that teaching metaphor in class may significantly improve learners’ metaphorical competence and their communication skills.

“Culture exposure is crucial in learning and teaching figurative language in a foreign language. By focusing on a type of research known as ‘needs analysis,’ my research will inform curriculum designers and materials developers what should be taught in terms of metaphors and idioms in the selected languages,” Scarpete Walters said. By using examples of "heart" metaphors from one of the languages, she will later demonstrate in a separate study how culture-specific metaphors should be taught.

Her dissertation director, Professor of Slavic and applied linguistics Danko Sipka, said that what sets her project apart is its inclusion of multiple languages that span the globe.

“Her research is unique as it is truly interdisciplinary, intercultural and multilingual,” Sipka said, congratulating her for receiving the support grant. “The highly competitive award, bestowed upon her by two prestigious national organizations, offers external validation for the soundness and originality of her research.”

Scarpete Walters is a first-generation student in the Comparative Culture and Language doctoral program of the School of International Letters and Cultures. She has recently been advanced to candidacy. She is also a graduate teaching associate in linguistics. Prior to coming to ASU, she studied and taught in Bucharest, Romania. There, she completed a master’s thesis in Romanian and another in Modern Greek.

This past semester, Scarpete Walters enrolled in the Humanities Lab called “Language Emergency,” a collaboration with Indigenous peoples of Arizona aimed at protecting their languages and cultures. Her team created surveys to investigate the expectations and needs of dictionary users to determine the most appropriate content and design features.

This ties in with her dissertation research; Scarpete Walters plans to share the data she collects with the local Indigenous community to contribute to the expansion of their dictionary databases.

To further support her dissertation research, Scarpete Walters will enroll in the Critical Languages Institute of the Melikian Center this summer to study first-year Albanian. The seven-week program allows students with no previous knowledge of Albanian to reach a novice high or intermediate low level of language competency.

“As a PhD student specializing in cultural linguistics, Gina knows that learning Albanian will enrich her research,” said Irina Levin, the director of the Critical Languages Institute (CLI) and associate director of the Melikian Center. “At CLI, we are proud to offer less commonly taught languages like Albanian to students like Gina from ASU and across the country.”

No. 4 Sun Devil Softball took down No. 10 Washington in the rubber match of the series to clinch the Pac-12 Conference title outright. ... No. 4 Sun Devil Softball took down No. 10 Washington in the rubber match of the series to clinch the Pac-12 Conference title outright.