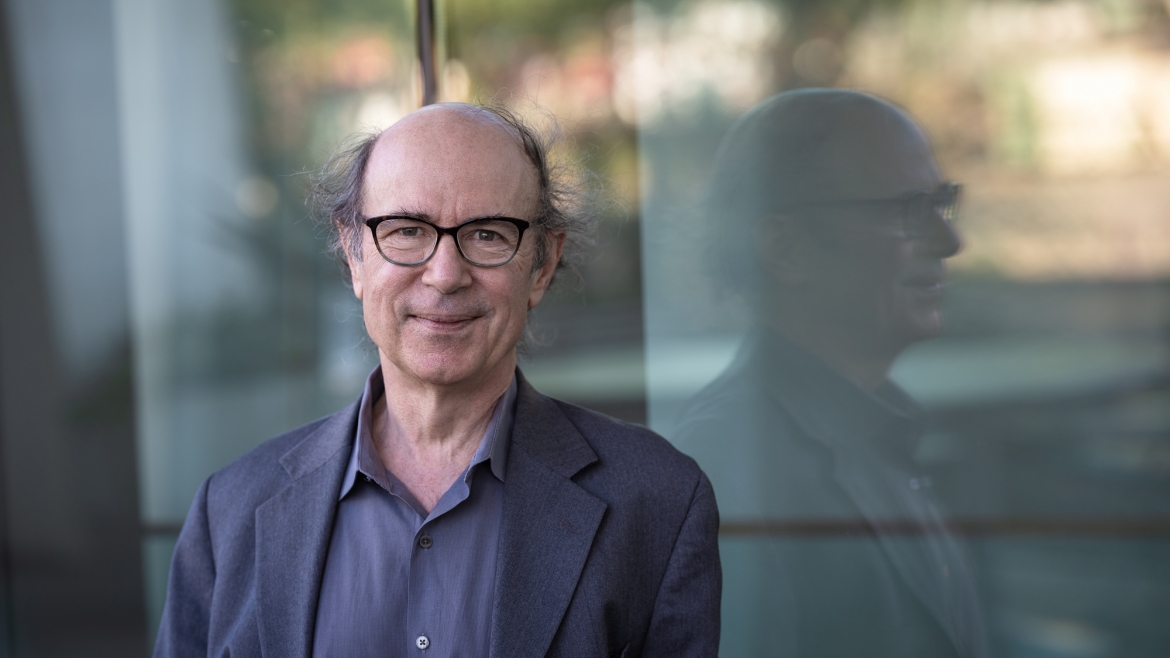 Frank Wilczek, a Nobel Prize-winning theoretical physicist, author and Arizona State University Distinguished Professor, whose boundary-pushing investigations into the fundamental laws of nature have transformed our understanding of the forces that govern our universe, was announced today as the winner of the 2022 Templeton Prize.

The Templeton Prize, valued at more than $1.3 million, is one of the world's largest annual individual awards. Established by the late global investor and philanthropist Sir John Templeton, it is given to honor those who harness the power of the sciences to explore the deepest questions of the universe and humankind’s place and purpose within it.

“We are delighted and honored to award Frank Wilczek this year, as he is one of those rare and wonderful individuals who bring together a keen, creative intellect and an appreciation for transcendent beauty,” said Heather Templeton Dill, president of the John Templeton Foundation. “Like Isaac Newton and Albert Einstein, he is a natural philosopher who unites a curiosity about the behavior of nature with a playful and profound philosophical mind.”

Wilczek’s achievements in physics, which include establishing the theoretical description of one of the four fundamental forces in nature and proposing a leading explanation for dark matter, put him in the first rank of scientists. Moreover, as a public intellectual, his lectures and writings have illuminated the philosophical implications of his ideas. Across his work, he reveals a vision of a universe that he regards as embodying mathematical beauty at the scales of the magnificently large and unimaginably small: a universe inherently beautiful in all its parts. 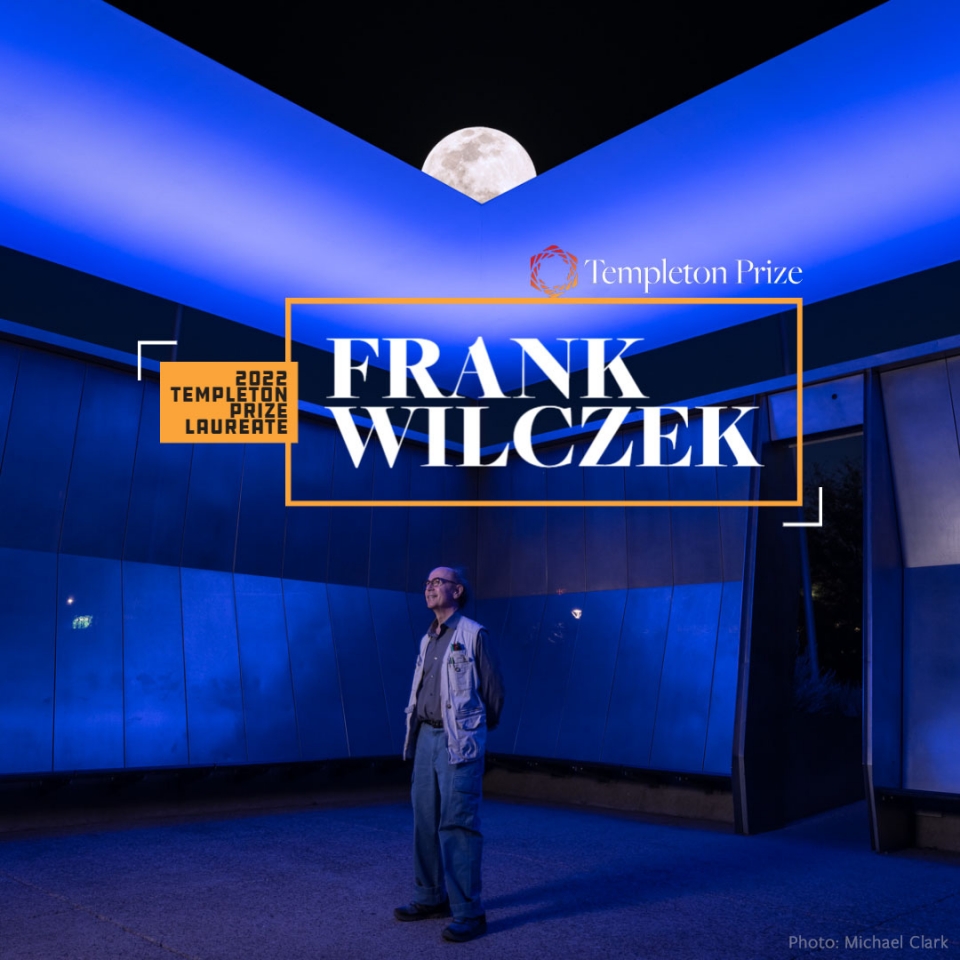 Frank Wilczek is the 2022 recipient of the Templeton Prize. Wilczek explores the deepest questions of the universe and humankind’s place and purpose within it. Photo by Michael Clark

A Distinguished Professor in ASU's Department of Physics, Wilczek won the Nobel Prize in 2004 for his early-career work establishing the fundamental theory of the strong nuclear force. Since then, he has continued to pioneer new concepts in physics, naming and developing the theories of anyons, time crystals and axions, each of which now defines major fields of inquiry. Throughout his career, Wilczek has used his exceptionally fertile scientific imagination to unveil previously hidden realities.

"Professor Wilczek is a true renaissance man with broad interests, and this prize is recognition of that," said ASU Department of Physics chair Patricia Rankin. "He is committed both to advancing the field and to working with young students to bring them into the field. It is a pleasure to interact with him and his wife Betsy (Devine) – I always come away knowing something new."

Wilczek has also engaged with a wide audience as a writer and speaker. He has written several popular books, including "A Beautiful Question" (2015) and "The Lightness of Being" (2008). In his most recent book, "Fundamentals "(2021), Wilczek presents a set of 10 distilled insights drawn from physics and harmonized with artistic and philosophical sources to illuminate characteristics of physical reality. A columnist for the Wall Street Journal, he reflects on scientific subjects for a broad readership. His witty, enlightening authorial style puts him in the company of other great physicist-writers, such as Nobel-winner Richard Feynman and 2000 Templeton Prize laureate Freeman Dyson.

“Throughout Wilczek’s philosophical reflections, there is a spiritual quality to his ideas,” Dill said. “By uncovering a remarkable order in the natural world, Wilczek has come to appreciate different ways of thinking about reality, and through his written work, he has invited all of us to join him in the quest for understanding. When we come face to face with the beauty that Wilczek describes, we can’t help but wonder about humankind’s place and purpose in the universe.”

In Wilczek’s book "A Beautiful Question," he asks, “Does the world embody beautiful ideas?” and answers affirmatively, yes. Drawing from science and aesthetics, he argues for an objective principle of beauty in which our universe employs the most elegant structures to achieve spectacular surprises.

With the flair of an artist, he paints a picture of the universe in which space and time, logic and pure mathematics form a pattern of awe-inspiring beauty. His concept of natural beauty is one where maximum complexity arises from foundations of maximum simplicity.

“Through (Wilczek’s) work, we’ve begun to glimpse the sort of beauty and coherence worthy of an ultimate description of physical reality,” wrote ASU faculty and Regents Professor in the Department of Physics Paul Davies (winner of the Templeton Prize, 1995) in a letter of commendation.

Wilczek now joins Davies in making their institution one of the few in the world to have more than one Templeton Prize winner.

“Wilczek has endeavored to capture the beauty and sheer ingenuity of nature, its mathematical underpinnings, and its consequences for human meaning and purpose,” Davies wrote.

While remaining firmly rooted in physics, without a commitment to any religious tradition, Wilczek has applied the insights of his field to the great questions of meaning and purpose pondered by generations of religious thinkers. As he writes in his book, "Fundamentals": “In studying how the world works, we are studying how God works, and thereby learning what God is. In that spirit, we can interpret the search for knowledge as a form of worship, and our discoveries as revelations.”

“The intent of the Templeton Prize is noble and timely, and something the world needs, which is to bring attention to the possibility of new approaches to the problems or situations or challenges that people have traditionally accessed through religion, and many people still do,” said Wilczek, in a video statement for the Templeton Prize.

“The central miracle of physics to me is the fact that by playing with equations, drawing diagrams, doing calculations and working within the world of mental concepts and manipulations, you are actually describing the real world. If you were looking for trying to understand what God is by understanding God's work, that's it,” he said.

Wilczek is the sixth Nobel laureate to receive the Templeton Prize since its inception in 1972.

Wilczek joins a list of 51 prize recipients, including St. Teresa of Kolkata (the inaugural award in 1973), the Dalai Lama (2012) and Archbishop Desmond Tutu (2013). The 2021 Templeton Prize went to ethologist and conservationist Jane Goodall. Preceding her was Francis Collins, former director of the National Institutes of Health and leader of the Human Genome Project, for his demonstration of how religious faith can motivate and inspire rigorous scientific research. Other physicists who have won the prize include Marcelo Gleiser (2019), Martin Rees (2011), John Barrow (2006), George Ellis (2004), Freeman Dyson (2000) and Paul Davies (1995).

Wilczek received a Bachelor of Science at the University of Chicago in 1970 and a PhD in physics at Princeton University in 1974. Currently, he is the Herman Feshbach Professor of Physics at MIT; founding director of the T. D. Lee Institute and chief scientist at Wilczek Quantum Center, Shanghai Jiao Tong University; Distinguished Professor at Arizona State University; and professor at Stockholm University.

He has been married to the journalist and author Betsy Devine since 1973. They have two daughters, Amity and Mira.

Arizona State finishes second in the Stillwater Regional to clinch a berth in the NCAA Women's Golf Championship. ...

Arizona State finishes second in the Stillwater Regional to clinch a berth in the NCAA Women's Golf Championship.